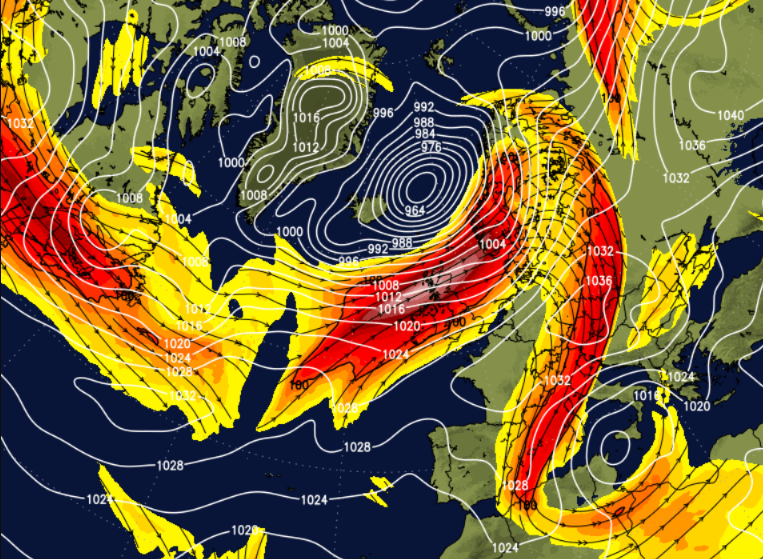 Atlantic driven weather has returned bringing changeable conditions, with the bulk of the showers this weekend mostly in the North and West. Any rain in the South East and South though should be mostly light and patchy. It'll be very mild across England and Wales at first, but as a cold front works its way slowly South, most places will have turned somewhat colder by Sunday.

The front currently over southern Scotland, and the far North of England is giving a band of rain, that'll soon move away from Down, Armagh, Dumfries, Lothian and The Borders. Behind the front, there'll be some sunshine, but also a fair number of blustery showers. These'll be most frequent and heaviest over the North and West of Scotland, and later Northern Ireland giving local hail and thunder, with the best of the sunny spells over more sheltered parts of East Scotland.  A South West wind will be fresh or strong, with gales in the North and West. Top temperatures here 7 to 9C.

To the South of the front there's a lot of cloud but with a few sunny intervals coming through, where you have shelter from a moderate or fresh South Westerly wind. Apart from a few spits of rain here and there in the wind, it'll be mostly dry, but with some rain spreading into remaining parts of northern England and also to parts of Wales and the North Midlands later. Top temperatures here 11 to 13C.

Remaining parts of Wales and the Midlands see some rain into the evening, but by the time it reaches the South and South East much of it should be light. Northern Ireland and Scotland particularly the North and West continue to see quite frequent blustery showers some heavy, while the North of England becomes mostly dry with clear spells. It'll turn quite cold in sheltered eastern areas, with a touch of ground frost in some rural areas where temperatures fall close to 1 or 2C in the coldest spots. Generally, though there'll be too much of a West to South Westerly wind for a frost, that'll remain fresh or strong in the North and West. Lowest temperatures mostly between 4 and 6C, with a milder 7 to 10C more likely in the South. 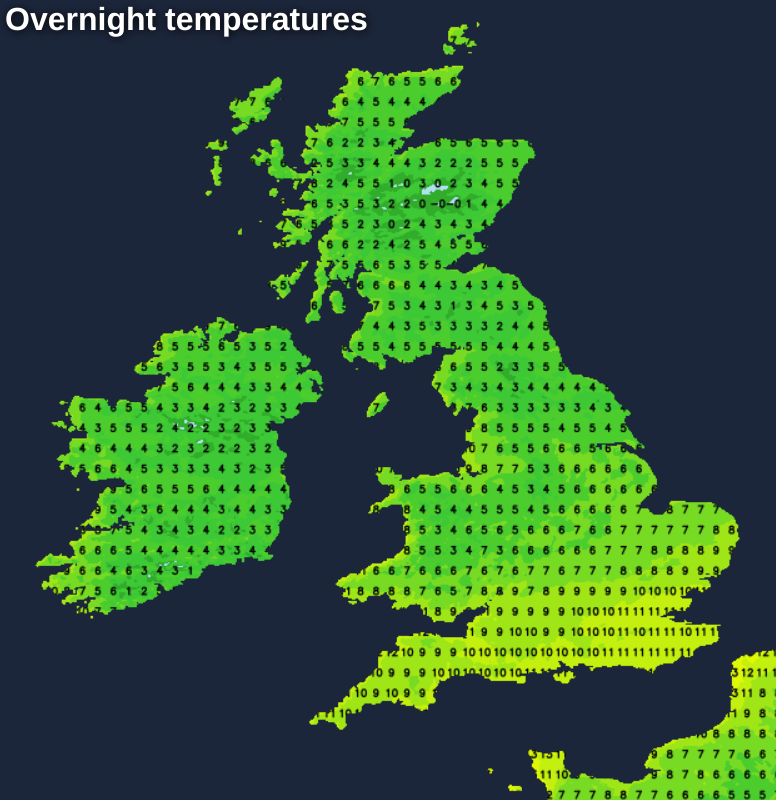 That front may still be affecting southern parts into Sunday giving a few mostly light showers, but should eventually clear from all but the Channel Islands. Elsewhere there'll be sunny spells particularly in central and eastern areas, while Scotland mostly the North and the West, continue to see scattered blustery showers. It'll feel chillier in the South in a West to South Westerly wind that'll remain fresh or strong in the North, with top temperatures 6 to 8C in the North and around 9 or 10C further South.

The North and West of Scotland see more showers after dark, but they'll fade as a weak transient ridge crosses the country from the West. There'll be clear spells, and as winds decrease a little, another ground frost is likely in sheltered rural areas as temperatures fall to between 2 and 5C. Later in the night, Northern Ireland may see some rain as more Atlantic systems approach. Misty weather with some drizzle over the Channel Islands may also spread to parts of the South West, but it'll be milder here.

It remains changeable and windy at times until mid-week, but it'll be very mild. Later it turns colder from the North West, with scattered showers that could wintry on northern hills.