Temperatures peak then plummet this week with ongoing flooding concerns

This week sees a switch from the UK being in very mild air, to much colder conditions. Currently to the south of a significant frontal boundary with a south to SW flow coming right up through western Europe, there is some tropical input for the next few days. Then midweek, much colder air sweeps in from the north and we get a short Arctic blast and even snow showers in the far north.

I take a closer look at this week’s temperature changes in the video below.

This week’s move into the colder air doesn’t last but it does look like the last week in November could be colder for everyone. Other concerns:

The significant frontal boundary is lurking just to the NW of the UK and bringing heavy and persistent rain. Western and NW Scotland have a yellow rain warning throughout Tuesday and into Wednesday. Many other parts of the UK will see increasingly dry and milder weather, but the rain just keeps on coming for western Scotland. It remains heavy and persistent and brings the risk of flooding, even travel disruption. 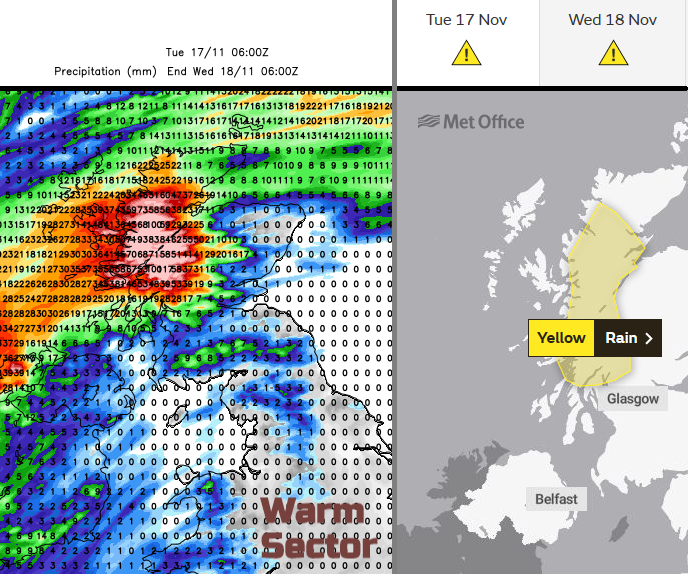 There are numerous flood watches or warnings around Britain’s coasts with lingering high river levels after the wet weekend in southern Britain. Environment Agency and council workers continue to clear blockages and debris from rivers, helping to alleviate further issues.  Brisk southwesterly winds will add to high tides and with the Seven Estuary being mentioned as well during the week with spring tides. Overtopping waves and spray for NE and NW coasts of England and there are flood warnings for sensitive inland parts of Tayside midweek linked to the heavy rainfall coming in from the west.

It will often be windy this week. The mild but blustery southwesterlies early on before the veer to a westerly behind the main front on Wednesday. Then through the night with gales, another veer to a northerly and the colder air

There is snow in the forecast this week, but it looks to be over northern mountain tops on Wednesday night and to lower levels of northern Scotland during Thursday. Nothing to get overly excited about just yet although annual White Christmas odds are out and will fall as soon as snow is reported anywhere in the UK.

So, by Thursday morning there will be sleet and snow showers for northern mainland Scotland and the northern Isles brought in on a fresh to strong north wind which will ease down. It will feel much colder everywhere. Further showers appear on the wind for Grampian into Thursday night when it will be cold everywhere. Northern Britain will see a widespread frost and there could be ice to watch out for with very light winds. It’s been a long time since many of us have needed the de-icer. Friday night will also be cold.