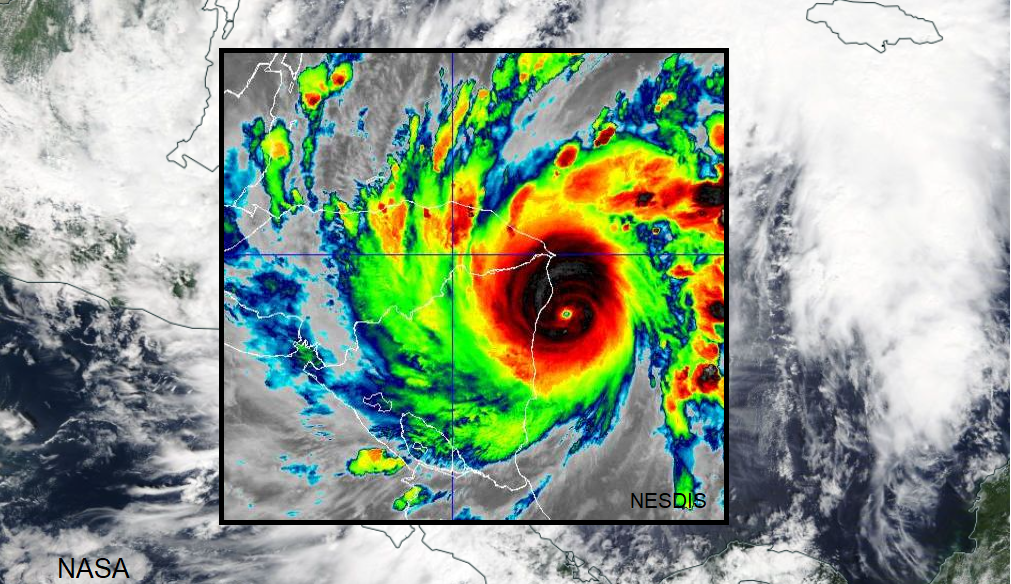 Hurricane Eta drenches Nicaragua and Honduras, where next?

Hurricane Eta made landfall along the coast of Nicaragua as a strong category 4 storm on 3rd November 2020. It had been swirling offshore for most of Tuesday dumping huge amounts of rain in the area and even now, at Tropical Depression status, the mass of rain is causing terrible flooding and landslides across into Honduras. Eta seems to have more plans for the weekend, maybe even Florida next week, but the devastation for Central America will last into next year.

Nicaragua, the Americas 2nd poorest country, suffered storm surge, torrential and ongoing rains with widespread flooding. Landslides resulted and there were destructive winds. Rivers burst their banks, powerlines and trees fell down and roads were blocked. Schools remain closed in the north of the country if they still exist as viable buildings. Some are being used as shelters. The flooding risk extends over more of Central America with Honduras currently taking the brunt of the rainfall.    Northern Caribbean shore region of Atlantida, hard hit.

Eta or its remnants are not finished yet. Usually, tropical cyclones make landfall and with their watery source of energy cut off, they slowly fade. Although sometimes over the US they re-emerge out of New England and head across the northern Atlantic to influence our UK weather.

The mountainous areas that powerful hurricane Eta has encountered have done a good job of pulling apart Eta’s structure, it is disorganised now. It is marked on the NHC tracking map as a post-tropical depression, it has lost its tropical characteristics. When UK forecasters talk about ex-hurricane Flossie heading our way, the system is post-tropical having transitioned as it moved over the colder waters further north. However, this system still is near to viable energy sources. There is the moist warm air from the Caribbean Sea and the Pacific ocean nearby as it sits over Honduras. It will be steered northwards, heading back over the sea at the Gulf of Honduras. Then as it encounters the warm waters of the Caribbean Sea it will strengthen once more, returning to a tropical cyclone and is forecast to head towards western or central Cuba, then perhaps next week Florida.

NHC 8th Nov : "Hurricane conditions are expected in portions of the Florida Keys by early Monday where a Hurricane Warning is now in effect."

Some people in Nicaragua are now returning to their home areas after the evacuation.

Hurricane Eta peaked with 150 mph winds, tying it with hurricane Laura for top place this season as it's pressure fell to 923 hPa whilst rapidly intensifying during Monday 2nd, (Laura moved through the Caribbean late August and then made landfall in Louisiana as a Cat.4). It is the 28th named storm in an 'extremely active' season.  It is the strongest Greek alphabet named storm on record, but these names do not get retired, unlike catastrophic ‘people’ named storms. Cuba witnessed the most powerful hurricane on record back in 1932 and Nicaragua has been hit by devastating cyclones before.

Hurricane Felix in Sept 2005, came ashore as a Cat. 5. Tropical Storm Nate hit in 2017. Hurricane Mitch devastated Honduras and Nicaragua in 1998 with over people 10,000 dead. Outbreaks of disease such as cholera, malaria and dengue fever followed in the shelters. This time with Eta,  there is COVID to add into the picture. 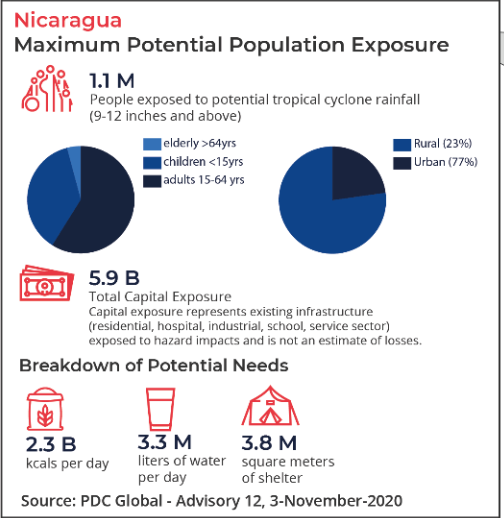 Once more it is the amount of water which is causing significant damage and devastation. A metre of rainfall. NHC "isolated maximum storm totals of 40" (1000mm) in eastern Honduras and eastern Nicaragua. Cayman islands 30" (760mm) and Jamaica 15" (380mm) ." This means further catastrophic, life-threatening flash flooding, river flooding with landslides, which is now being seen in Honduras.

Along the Caribbean coast, the Nicaraguan government confirmed that about 6,000 families (almost 30,000 people) were evacuated. Lessons about evacuations and warnings have been learnt over the decades but already struggling peoples have had their homes, livelihoods and food stocks wrecked again and health concerns are high.

The need for food, shelter, health services, access to safe water and putting back livelihoods will continue for months after Eta has moved away, even if we do see Eta again in the news for Belize, Cuba and eventually Florida. It could even interrupt the presidential election headlines, slightly. Plenty of uncertainty all round.