Time to recover after the UK's October rains

Last weekend and indeed last month it has been all about the rain. October 2020 was a very wet month, the early part for eastern Britain and the end few days for western Britain. The Channel Islands were also very wet, Jersey Met has just reported, "wettest October and fourth wettest of all months" on record (since 1894).

The October rainfall data is now out. The 5th wettest October on record for the UK. Below the images show first half of the month which included Saturday 3rd October, the wettest day, UK wide on record and the whole month compared to average. Later in the month was also very wet thanks to Storm Aiden and the remnants of Hurricane Zeta. 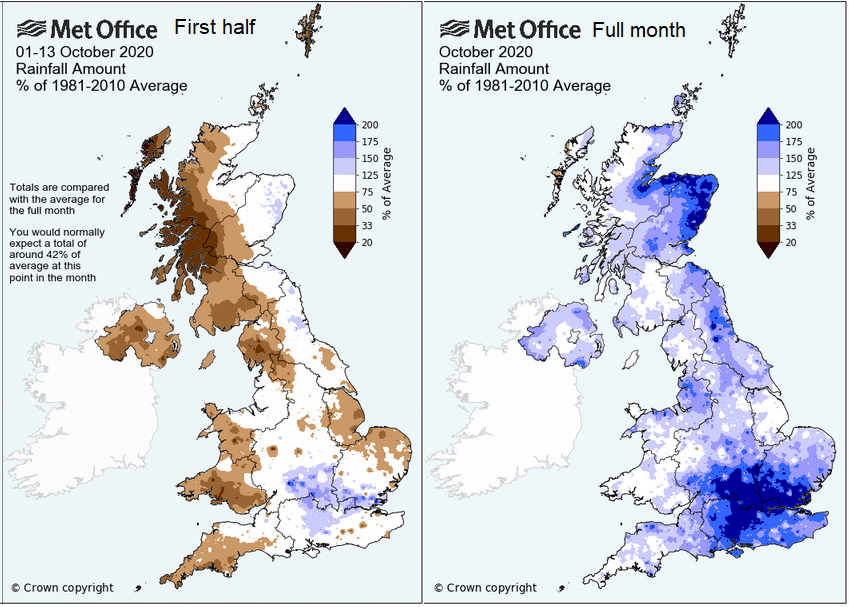 As a result, the start of November saw flood alerts and warnings with high river levels, sodden ground and any extra rain quickly causing issues to the sensitive catchments. There are several still in place for Tuesday morning from the Environment agencies looking at the ground and river conditions.

Met Office NW England – “Showers will merge into a period of more prolonged heavy rain this evening, before clearing away northwards. A few places, particularly over hills, may see a further 30 to 50 mm of rain, with this falling onto saturated ground which may lead to further flooding.”

The Scottish Environmental Protection Agency SEPA also has concerns for SW Scotland and Argyll – “Heavy rain is forecast to affect this area from Monday evening and overnight. This could cause some flooding impacts from rivers and surface water, and disruption to travel.”

As this rain moves northwards tonight there will be wintriness over the highest hills of northern England, a little snow for the Scottish mountains.

Around midnight, a developing low pressure will bring rain and blustery winds to SW Britain. Even some wintriness to the Brecons and Exmoor as it clears away eastwards.

Env. Agency SW England – “Rivers are expected to rise to bank-full conditions with some localised flooding to low lying routes close to rivers. We expect rivers to remain high throughout Tuesday morning. “ 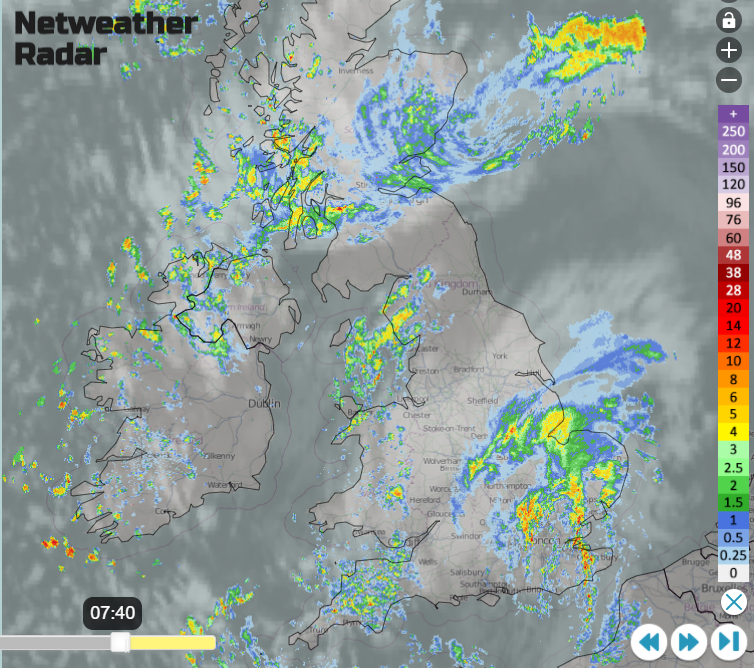 The overnight rain will still be over SE Britain for Tuesday morning but clear away eastwards, after that there will be more drier weather for the UK, still with heavy showers from the west but more scattered. However, the Environment Agency still have concerns for slower responding rivers such as the Severn through Tuesday and into midweek for the River Ouse in York. Just because the weather improves it doesn’t mean the river levels suddenly drop. Flow from the catchment areas continues.

It will become drier and colder. Frost and fog will form, so a different kind of weather to watch out for. The winds will be light under an area of high pressure with sunshine by day and chilly clear skies by night. 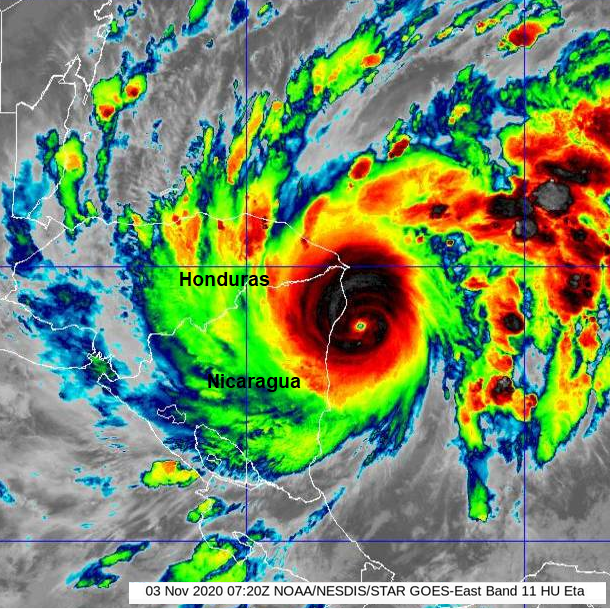 As the UK recovers from a soggy October, Central America is awaiting the arrival of major Hurricane Eta. The 28th named storm of the Atlantic season, this strengthening cyclone is heading towards Nicaragua and will bring huge amounts of rain to the country and Honduras, Eastern Guatemala & southern Belize. It is a Cat4 and close to Cat 5. just before landfall, due early Tuesday with catastrophic wind damage.

“Water is a serious concern with #Eta. Storm surge could be as high as 12-18 feet above normal tide levels along the Nicaragua coast, and rainfall could be up to 35" (890 mm) for portions of Central America. Both hazards are likely to cause catastrophic damage. “ NHC

More discussion on Hurricane Eta in the Netweather forum