Delta: Louisiana prepares for yet another Hurricane

Once more the Louisiana coast is on hurricane alert, awaiting an incoming storm with the threat of damaging winds, storm surge, heavy rains and evacuations in a time of COVID. The 2020 Atlantic hurricane season has certainly been energetic. 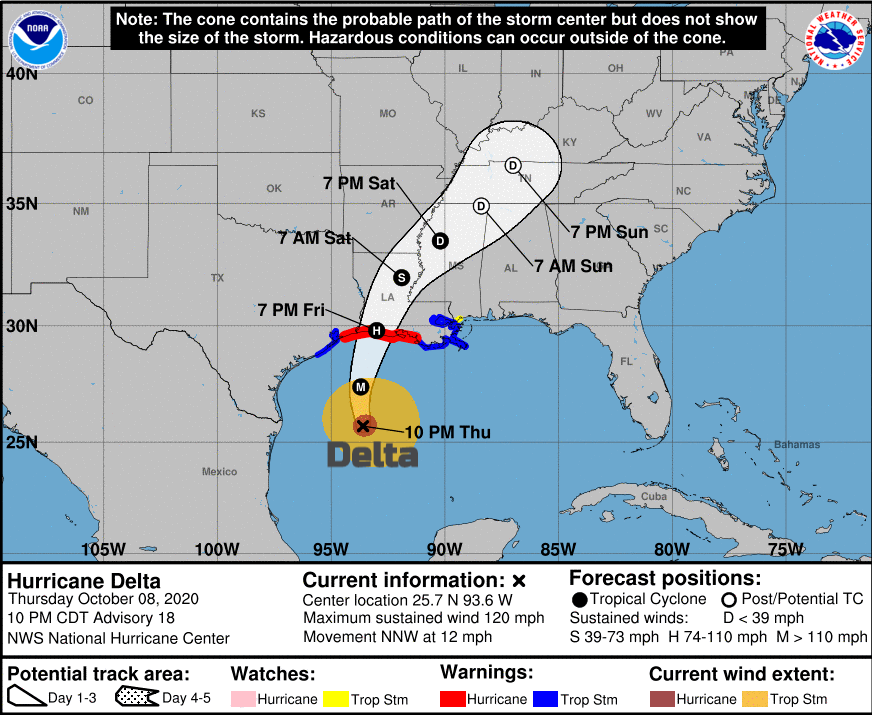 Early on Wednesday Hurricane Delta hit the Yucatan peninsula of Mexico as a category 2 storm, having intensitfied from a Tropical Depression to a Cat.4 in the quickest time on record for the Atlantic. In about 30 hours.  There had been significant preparations in the region; closures and cancellations midweek with the hurricane causing fallen trees which pulled down power cables. Delta’s heavy rain followed closely behind Tropical Storm Gamma’s downpours in the same week. Thousands of people were evacuated, with issues of COVID distancing in shelters. Now the clean up begins  for Yucatan as Delta churns away over the warm waters of the Gulf of Mexico with Louisiana in its sights.

This is the 25th named storm of this Atlantic season, the ninth hurricane. Not all the letters are available when naming hurricanes but as they have run out (which has only happened once before, in 2005) we are now seeing the Greek Alphabet being used. This season started early so all of the letter names came early, earliest M storm, S storm etc. In 2005 when the naming included Epsilon and then Zeta, these storms were being formed at the end of the year , end of Nov 2005 into Dec and end of Dec into Jan 2006. September is seen as the peak month of the Atlantic hurricane season, we have a while to go yet.

Also with La Nina active in the tropical Pacific, there are effects around the world with more Atlantic storms likely to develop.

“La Nina can contribute to an increase in Atlantic hurricane activity by weakening the wind shear over the Caribbean Sea and tropical Atlantic Basin, which enables storms to develop and intensify,” said Mike Halpert, deputy director of NOAA’s Climate prediction centre. With this global pattern being established, NOAA upped their May forecast to “extremely active” in August with 19 to 25 named storms predicted and 7 to 11 hurricanes.

If Delta does make landfall over CONUS (Continental United States), and that does look very likely, it will be the 5th hurricane this year. The last time that happened was, yes, in 2005. 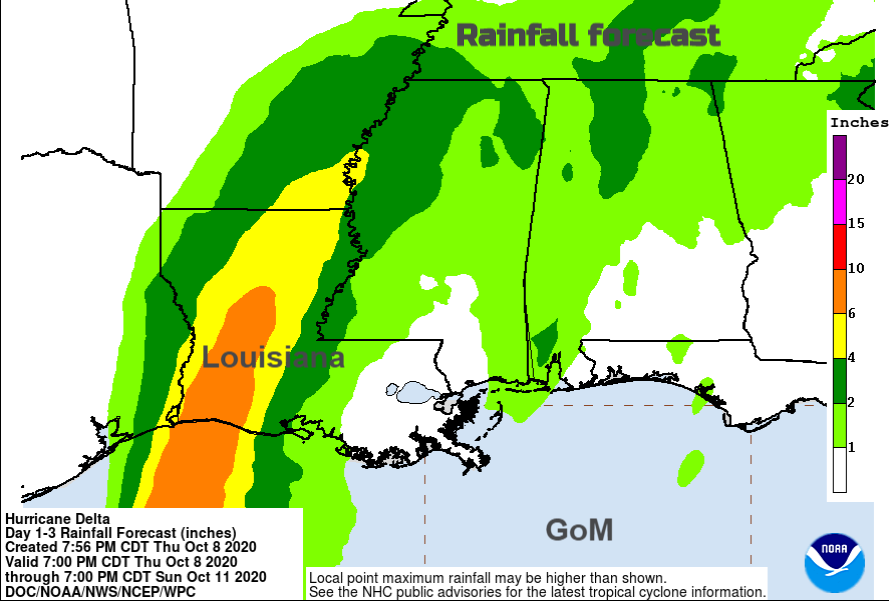 The forecast sees Delta strengthening to a major hurricane while it remains over warm deep waters, with low wind shear and plenty of moisture. Closer to the shore it should then ease back slightly before landfall later on Friday 9th October (local time) but still as a large system.

The Key messages from NHC (National Hurricane Centre) Delta continues to grow in size as it approaches the northern Gulf Coast, where life-threatening storm  surge and dangerous hurricane-force winds are likely beginning Friday, particularly for portions of the Louisiana coast.  Significant flooding is likely Friday and Saturday - central Gulf Coast into Lower Mississippi Valley then further inland, heavy rainfall is expected in the Ohio Valley and Mid-Atlantic this weekend. 6-10” of rain, even 12” in places spreading well inland for Louisiana.

Louisiana has been on alert for several storms this season with Hurricane Laura making landfall there in August as a category 4 storm. Governor John Bel Edwards said

“All who live in South Louisiana should be preparing for Hurricane Delta and plan to be in place by Thursday evening as we prepare to weather yet another strong hurricane.”

By Friday 9th morning, tropical storm force winds will be impacting the northern Gulf towns and resorts, the storm surge beginning to raise water levels at the coast with dangerous sea conditions, large waves and rip currents before landfall on Friday evening with the hurricane force winds and heavy rain.

More discussion about Delta in the Netweather forum