Thursday lull before Storm Alex arrives for Friday and the weekend

The UK will be in between weather systems on Thursday, so it will be a drier and brighter day for many compared to yesterday, though there will be some showers around, mostly across the southwest and far north. Trouble is brewing for the south tomorrow though, as a rapidly deepening low pressure system over the Atlantic, named Storm Alex by Meteo France, swings in across NW France, bringing wet and windy conditions across southern UK. Heavy rain will then become widespread on Saturday and feeling cold. Low pressure will be sat over the UK on Sunday, bringing showers for many. Remaining unsettled and windy at times next week. 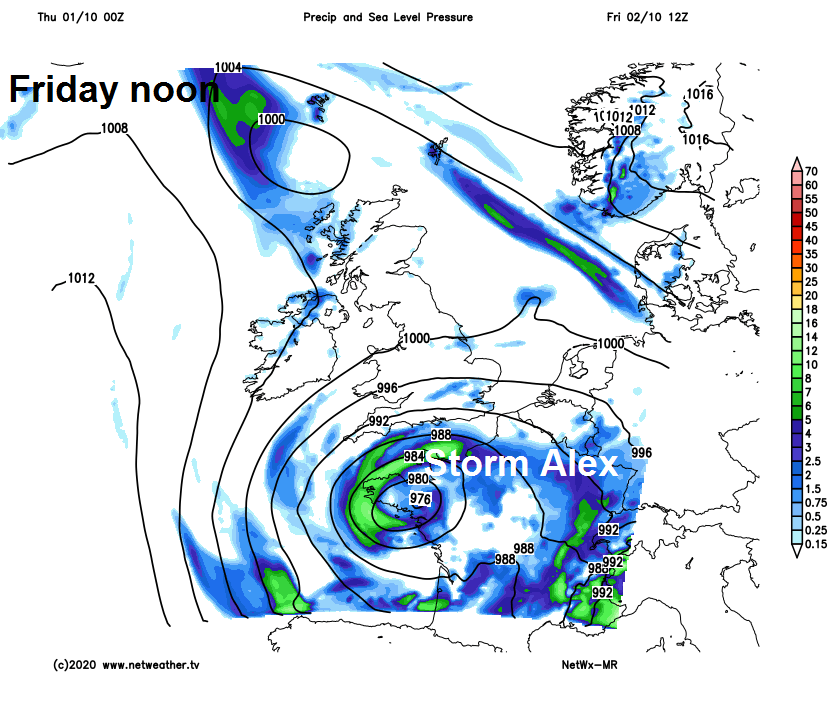 Yesterday’s frontal system that brought all the rain has now cleared out the way for most over the North Sea, clearing east Kent and coastal East Anglia by mid-morning. However, it will still bring cloud and outbreaks of rain to the Northern Isles and the northern half of Scotland through today. But for most today, it will be drier and sunnier than yesterday, with sunny spells, but there will also be some scattered showers around too for southern and western areas. Showers will be most frequent and heavy across SW England, south and west Wales, where they may be accompanied by hail and thunder too. Lighter winds too today, but on the cool side, temperatures reaching 11-13C in the north, 13-15C in the south. 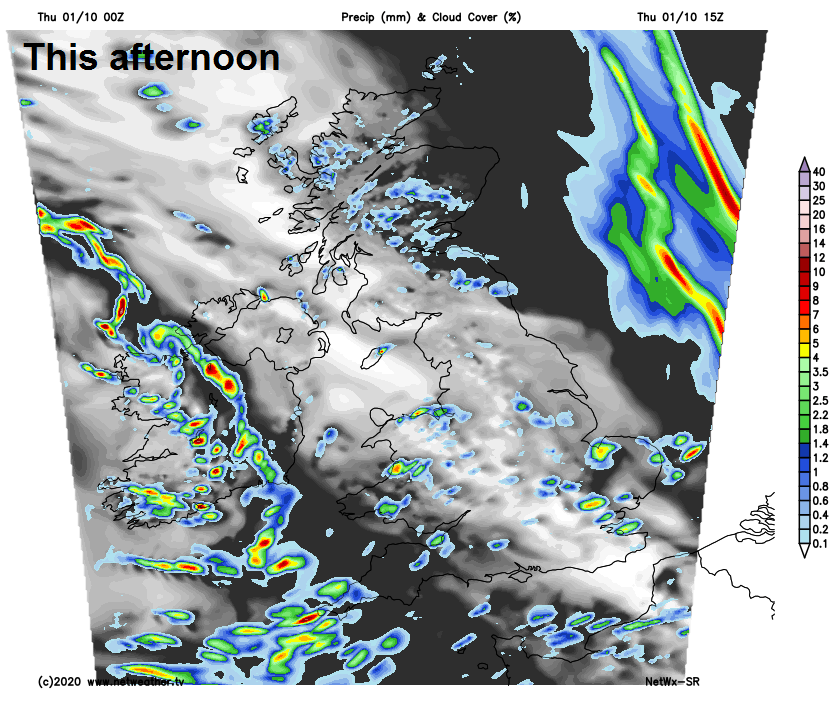 Turning windy and cloudier across southern areas of England and Wales tonight, with increasing showers developing pushing up from the south, merging into more persistent spells of rain across southern most counties of England in the early hours of tomorrow morning. Northern England, N. Ireland and southern Scotland seeing a mostly quiet and dry night, with clear spells and turning chilly in rural spots, perhaps with a touch of ground frost. Today’s cloud and rain lingering northern Scotland though.

Storm Alex will spin up over NW France on Friday, the worst of the strong winds from the storm reserved for France, where winds could gust to 70-80mph over Brittany, perhaps up to 70mph for the Channel Islands. But Alex will bring a band of heavy rain and strong winds north across southern England, south Wales, Midlands and East Anglia. 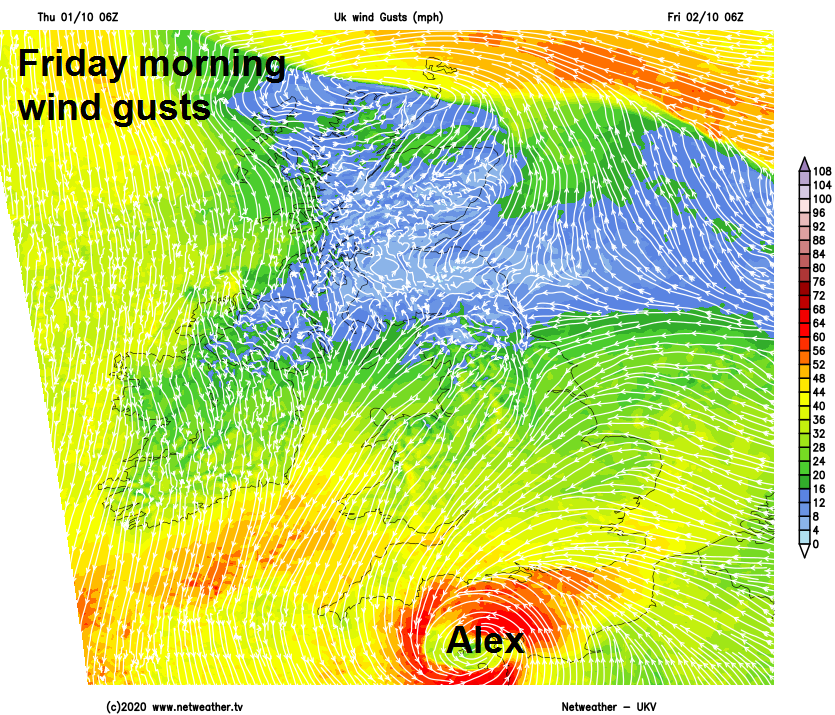 A Met Office yellow warning for rain and wind is in force between 3am and 8pm tomorrow for southern counties of England south of the M4. The warning states:

Some places could receive 40-50 mm over the course of 12-18 hours, most likely in the south of this region, combined with gusts of 45-55mph inland during Friday morning rush hour. Some coastal regions exposed to the south-east could experience gusts of 60-65mph.

In contrast, most of Scotland and N. Ireland will enjoy a dry and sunny day, once early cloud and showery rain clears NW Scotland. Northern England cloudier with some scattered showers, though some brightness possible in the far north. Another cool day across all the UK, temperatures reaching 12-15C at best.

Generally cloud with outbreaks of often heavy and persistent rain extending north across much of Britain on Saturday, some high rainfall totals in places, particularly across Wales and northern England, leading to an increased risk of flooding in prone areas. Drier and perhaps brighter conditions extending north across southern and eastern England through the afternoon. Feeling cold with the cloud, rain and a brisk easterly or northeasterly wind.

Low pressure likely centred over southern England on Sunday, with bands of showers or longer spells of rain wrapping around the low affecting southern counties of England, Ireland, N. Ireland and northern Scotland, while elsewhere sunny spells for many but also scattered showers are likely too. Windy across northern Scotland, southern and western coasts of England and Wales, winds lighter inland.

Remaining cool, unsettled and windy at times next week. Low pressure will be close to the east through much of the week, feeding in brisk northwesterly winds which will in turn feed in sunny spells and showers across most areas, perhaps more prolonged spells of rain at times.