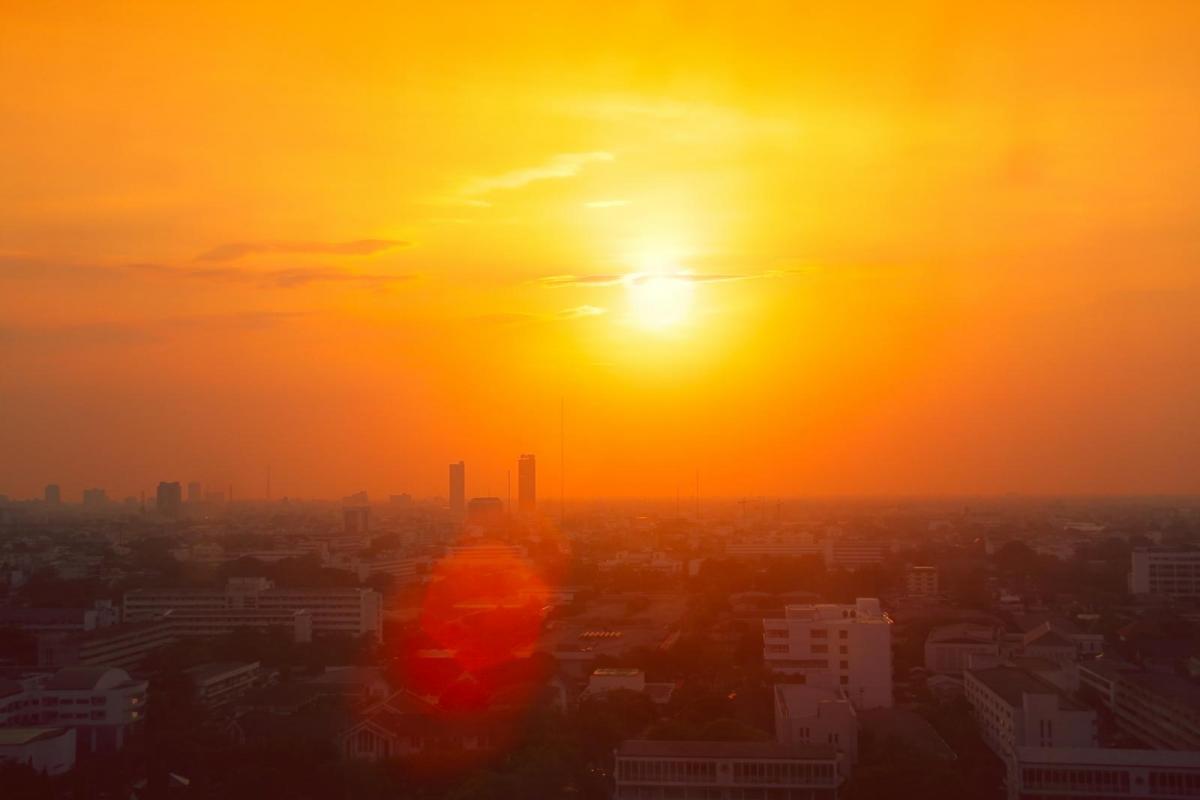 Hot Friday with thunderstorms later. Back to normal at the weekend

It's going to be hot today. Yesterday was very warm for England and Wales, particularly southern Britain with a top temperature at London Heathrow of 29.7C (85F). Today temperatures could reach 26c+ for Scotland, 29c+ for northern England and 34c+ in southern England. The UK could reach 35c, maybe 36c (97F) making this short surge of heat surprisingly intense. 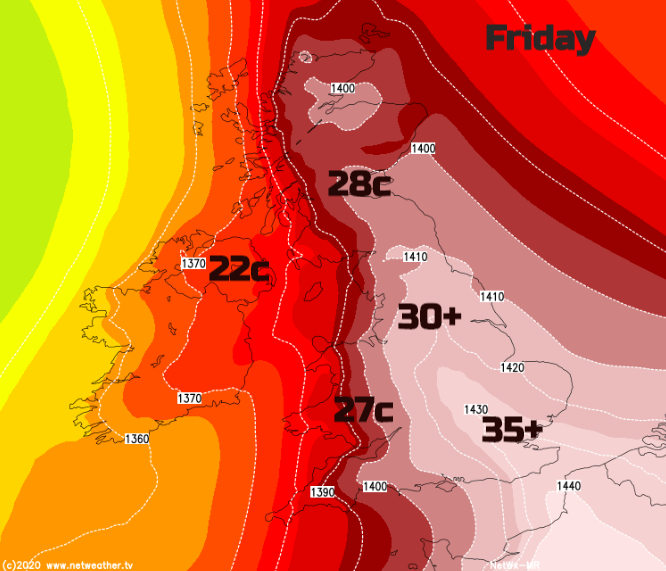 The heat will reach up through northern Britain today, so a real change after the wet weather of Thursday, plenty of sunshine to come. Northern Ireland will be pleasantly warm into the low twenties but won’t feel the Friday heat as a cold front from a low to the north changes the air mass.

The UK record is 38.7C seen at Cambridge late July 2019, so we aren’t getting near that extreme and this isn’t really a heatwave as we are unlikely to see a third day of heat giving the necessary time period of hot weather, it’s just a spike. The cold front will move across Britain at the start of the weekend and although eastern and SE England will still manage mid 20sC on Saturday, most of the UK will be back to high teens and low twenties. The weekend will not be as hot as today. 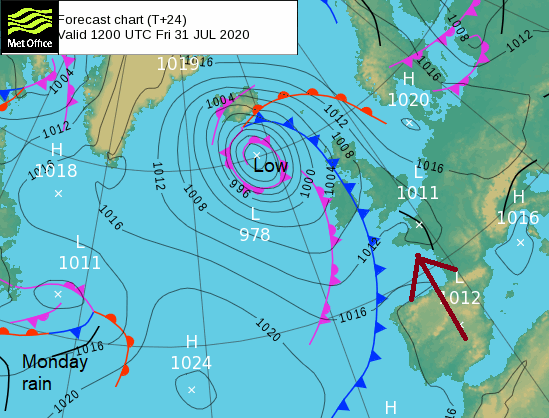 It’s not a UK-wide tale of heat and sunshine but that has to be the headline as we haven’t seen temperatures like this much this summer and July hadn’t even reached 30C. Many parts of Britain will have a gloriously sunny morning. The temperatures zoom up in a south-easterly breeze. The UK is within the warm sector of the low to the NW, the warm front brought Thursday’s rain which is now away to the north. The cold front is already bringing showery rain to Fermanagh and Tyrone this morning and more cloud to Anglesey, the Isle of Man and western Scotland. And the 9am temperatures are already into the 20sC 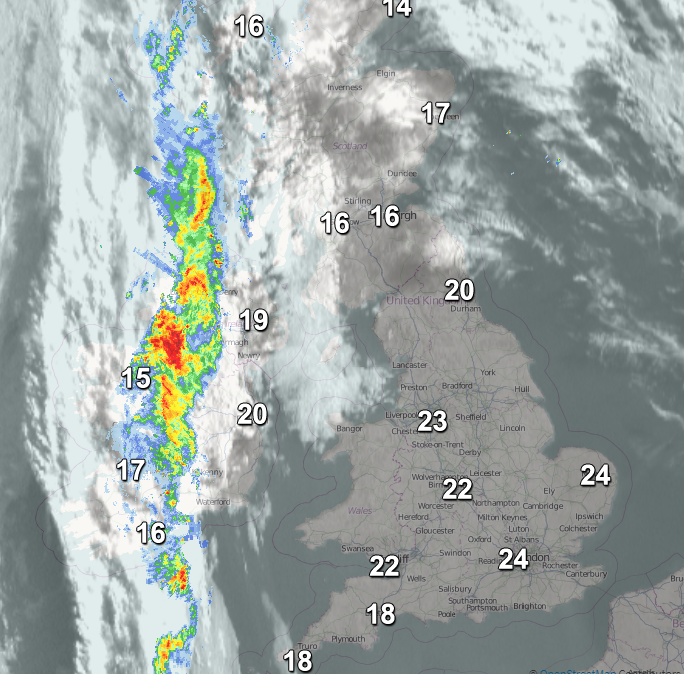 This frontal band is forecast to fragment as it edges eastwards today, over the Hebrides this afternoon, brightening up for Northern Ireland but the risk of some heavy showers for Devon and Cornwall and western Wales by this evening. Belfast could see 22C ahead of the rain but overall, it will be a mixed day but still with some warmth.

Wales will start the day with heat and sunshine but you can see on the temperature charts below that once the frontal cold moves in, the temperatures come down particularly in the west as the winds veer to a south-westerly in the afternoon. Still warm and bright but not the intense heat as the day progresses and a risk of a shower by Friday evening. 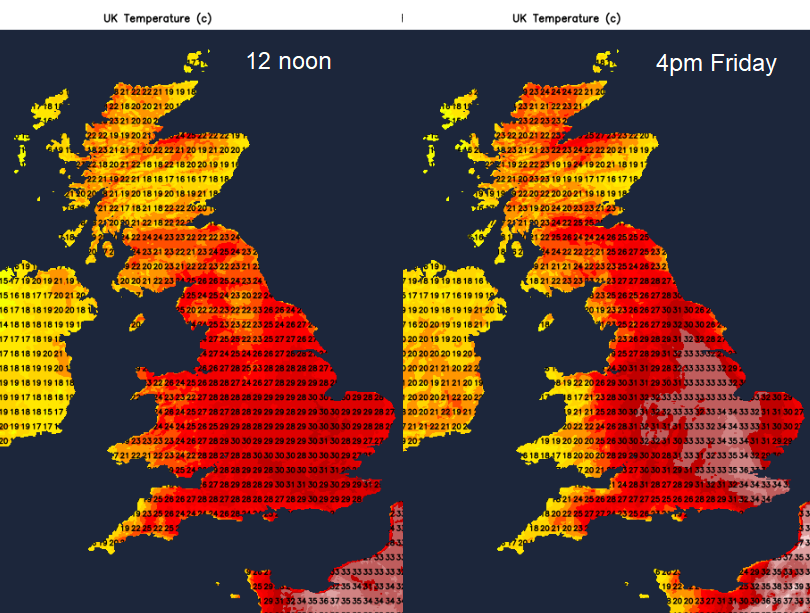 For the rest of Britain, much of Scotland and England and inland Wales Friday is all about the heat and sunshine. UV levels will be high, slap on your sunscreen. The pollen is moderate now but do take care if exercising in this heat -

“Air pollution levels are expected to be Moderate on Friday across eastern and some central areas of England and Scotland with hot and sunny weather. “ DEFRA

One potential upset to a balmy Friday evening of relaxation and maybe outside drinks is the threat of thunderstorms.

As AltoCu Castellanus builds, elevated thunderstorms may break out in places. There is still some uncertainty about exactly where these pulses will affect and when, focusing on later today and central, SE and eastern England. Today’s Convective Forecast shows 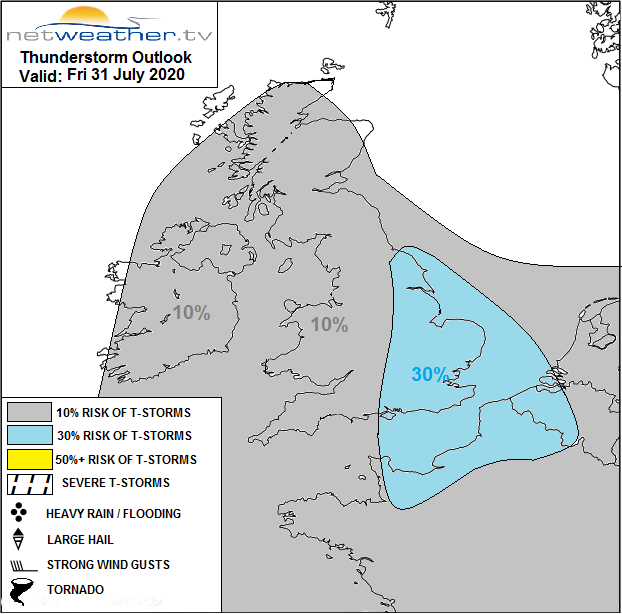 There is a smaller risk with the frontal band as it moves over western Britain. So, Friday is quite a weather event, with 35 or 36C forecast and widespread heat and sunshine. Frontal band with rain from the west, particularly for Northern Ireland and the threat of thunderstorms this evening.

Any thunderstorms drift away from East Anglia, Kent and Lincolnshire over the North Sea tonight, it will be very warm overnight ahead of the frontal band for London and eastern England.

With the front through by Saturday, the intense heat will have gone from the UK. SE Britain will still see temperatures of 23 to 27C which is very warm, but not very hot. There will be a scattering of showers moving in on the light westerly breeze. Plenty of sunny spells but temperatures generally back to high teens and low 20sC 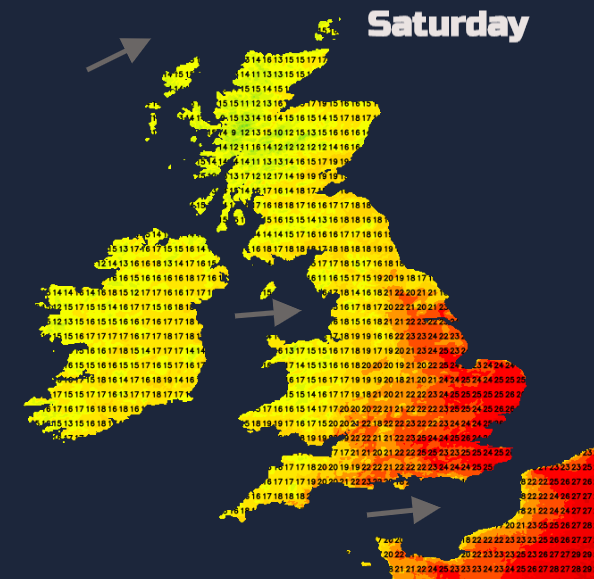 More showers for Northern Ireland during Saturday night with temperatures in Greater London reluctant to subside.

Sunday feeling fresher but still warm in the sunshine with showers from the west again. By Monday the second Atlantic low looks to bring heavy rain to SW England with more widespread rain by Tuesday.