Warming up, especially on Wednesday when there will be sunshine, temperatures into the 20sC for many parts of the UK and up to 27 or 28C for London. After that, there is rain in the forecast and some thunderstorms before the heat fades and a deep low moves past Northern Ireland and Scotland on Friday bringing gales.

The weather has certainly stepped up a gear after weeks of high pressure. There is rain this morning from frontal bands which will push northwards and allow the warmer air to feed up from the south.  So that becomes the warm front and the UK sees the temperatures rising midweek, but the cold front will also be significant. It tentatively edges in from the west on Thursday bringing rain to parts of the UK but also thunderstorms to England. Next, the deep low moves in and it's cold front gives everything a shove and clears out the last of the heat.

Today there is a good deal of cloud about and some patchy rain. As the front heads northwards there will be more patchy rain over northern Scotland, and thicker cloud with dampness for some western coasts. However eastern areas brighten up and see warm sunny spells as southern Britain continues with dry, sunny and warm weather. SE England should see temperatures of 21 to 26C so feeling very warm in the sunshine with hardly any breeze. For Wales 14 to 19C and Northern Ireland, high teens with Belfast up to 20C with a very light westerly breeze. Across the rest of England western coasts will be cooler at 15C but inland high teens to low 20sC. Scotland stays in the teens with more cloud, but some eastern areas could pop up to 19C when the sunshine breaks through this afternoon. 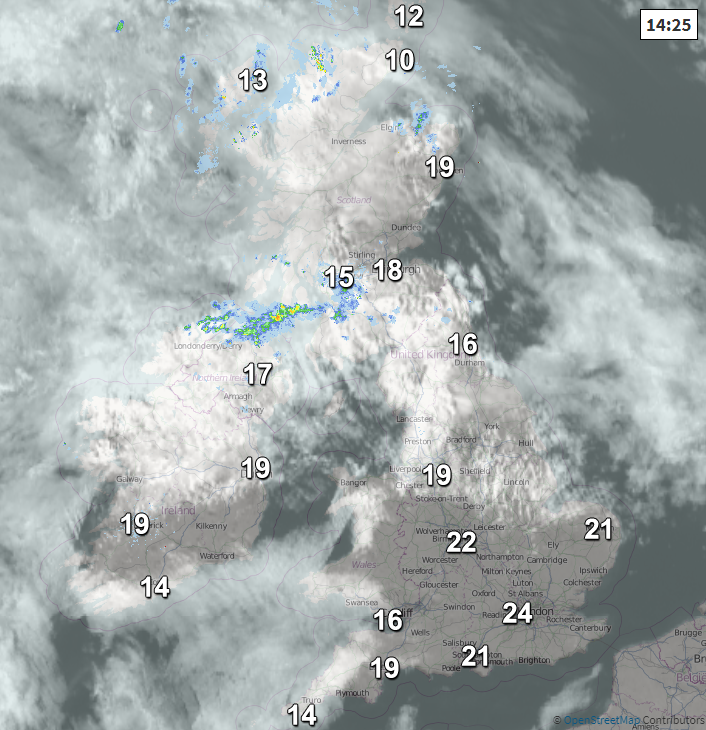 The last of the rain moves over the Northern Isles overnight and stays into Wednesday morning. It will be a mild night with mist and fog in places and light winds. Then the heat begins to build.

There will be some low cloud or fog to start with on Wednesday, but it soon becomes a glorious day with sunshine and temperatures into the 20sC and up to 28C for London. 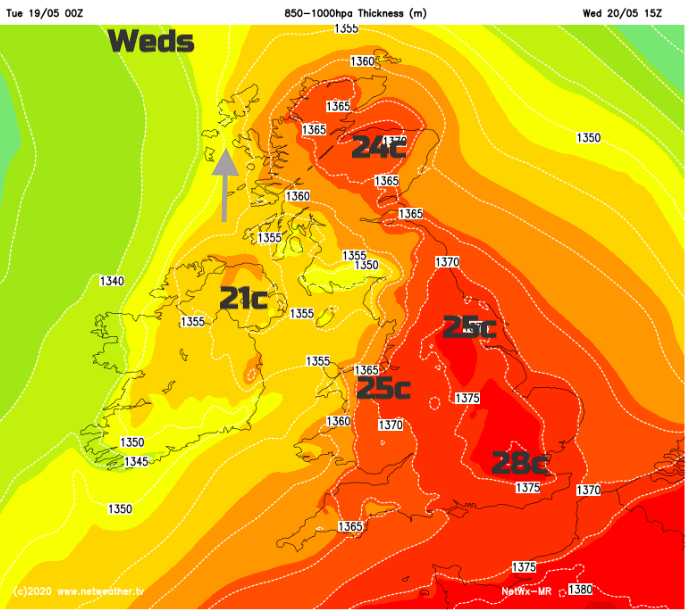 By Thursday there will be more cloud in the west and the first band of rain over Northern Ireland to start the day. For much of Britain, it will look like Wednesday, warm, fine, dry with sunshine. However, outbreaks of rain will soon reach western Scotland, Wales and the Isle of Man. Ahead of the main band, scattered showery outbreaks are likely for central southern England early morning. A sign of things changing although ahead of the rain band temperatures could again rise well into the 20sC with more of a southerly breeze. This band isn’t going to bring rain for everyone, and you may see thundery shower on your weather app but not get a thunderstorm. It is about probability; the ingredients will be there with central and eastern England looking most likely. The East Midlands and south-eastern Britain will be glad of any rain. There is a balance between this trough moving over the UK, the rain band and the heat of the day. This will affect how high the temperatures climb, but also how much energy the storm cooking gets. This leaves some uncertainty about where in England will see the most intense rainfall. It should all move through at a fair rate but there is the risk of torrential rain, hail, lightning and sudden gusty winds. That would be quite a shocker if you were still in warm sunshine mode. Keep an eye on the Netweather Radar on Thursday to see how the storms develop, remember to turn on the lightning sferics. 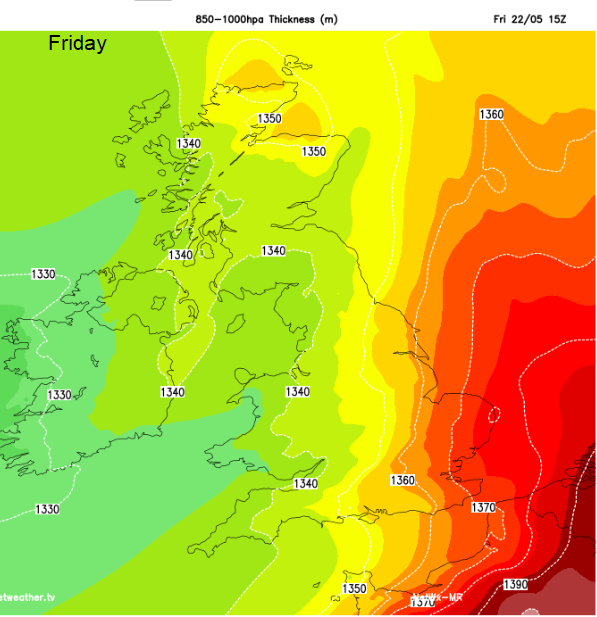 Next up is this Atlantic low. It links back to the tropical energy around Tropical Storm Arthur (the first storm of the Atlantic hurricane season) which has brought heavy rain and TS winds to North Carolina with high surf for the east coast of the US. Arthur itself is heading out to sea and nose dives south towards Bermuda by Thursday so will be nowhere near the UK.

Our low on Friday brings another stark contrast as we seem to move from summer to autumn in two days. There will be a little welcome rain, heaviest for NW Scotland. It is going to be very windy with the possibility of widespread gales. Ireland, the Irish Sea, North Channel and Scotland all look very windy. Next on the ‘name our storm’ list is Storm Ellen but with the "Stay at Home" message continuing in Northern Ireland and Scotland would it be necessary? 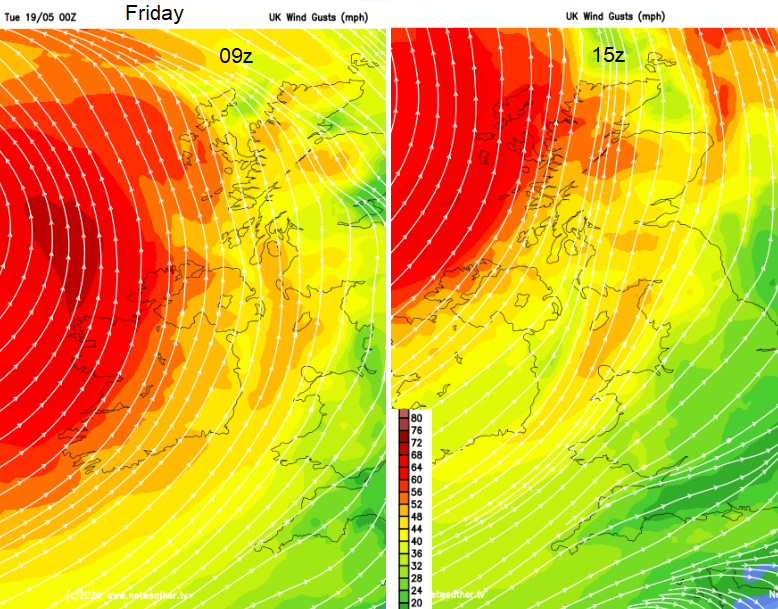 The low pulls away to the north leaving a blustery Saturday for much of the UK although with lighter winds for southern England as the high recovers. Pressure continues to build and so the winds ease for England and Wales but the temperatures across the UK will have taken a hit. The heat of midweek will have disappeared, but the May sunshine still gives pleasant warmth with a bit of shelter.