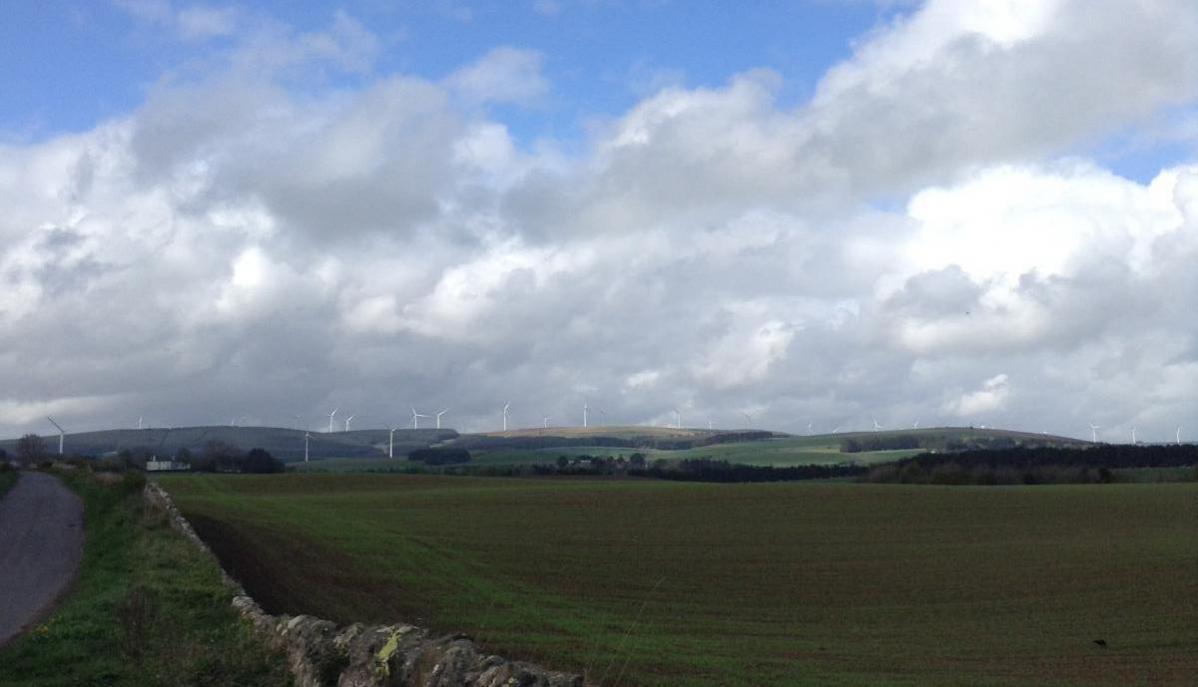 Turning Chilly To End The Week, But The Weekend Turning Warm & Windy

There will be quite a dramatic flip in temperatures over the next few days as the wind switches direction from a northerly tomorrow to southerly by Sunday. Tomorrow’s highs will range from 5-6C in northern Scotland to 10-11C in southern England, but Sunday could see highs reaching 15C in northern Scotland and up to 20-21C across southern England in the sunshine. So potentially a 10C rise in maximum temperatures in the space of two days. But remember to stay try and stay at home and only venture out locally for exercise and not head to usually busier popular parks and beaches in the fine weather expected over the weekend.

For now, quite a bit of cloud spilling south overnight across England and Wales means it’s a generally dull and frost-free morning – though still a chilly start towards the east where there are areas of clearer skies and so across East Anglia temperatures have fallen close to freezing in a few spots allowing a slight frost. Across Scotland it’s a windier picture as well as generally cloudy, with gales across the north, along with scattered showers across the north and west, merging into longer spells across the far north and turning increasingly wintry here as colder arctic air digs in here. 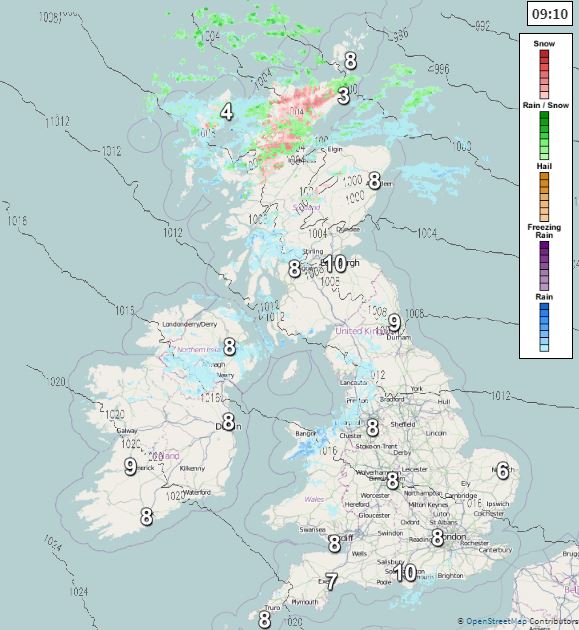 Colder air will spread south across Scotland through the morning behind a cold front clearing south, with showers continuing through the day across the north and west while turning increasingly wintry, falling as snow even to lower levels across the north, hail and thunder possible too. Remaining windy too with gales across the north, damaging gusts across Shetland – with a yellow wind warning for gusts of 65-75 mph. Highs this afternoon reaching only 5C at best across Stornoway, Inverness and Aberdeen – 8C in Edinburgh and Glasgow.

A generally cloudy and breezier day across England, Wales and N. Ireland, ahead of and along a weakening cold front sinking south across northern areas. The cloud will be thick enough for patchy light rain or drizzle across western areas, especially over hills, but for many it will stay dry. Mild, with temperatures ranging between 9-12C in the west, 12-14C in the east.

Cold front moving south overnight reaching southern England in the early hours, with cold arctic air flooding south across the north and northeast. So a cold night with a widespread frost for Scotland, N. Ireland and NE England, further sleet and snow showers affecting northern Scotland, cloudier and less cold across the south and west as that front clears here. 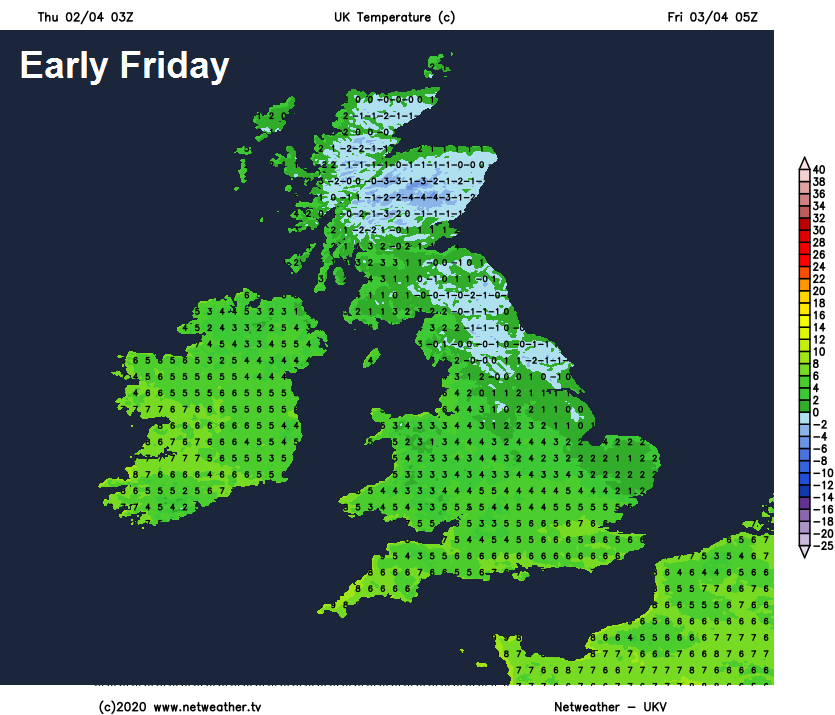 After a bright and frosty start, Friday will stay sunny but chilly across the north and northeast - with a mixture of sunny spells and showers, wintry at times across the north of Scotland. Wales, central, southern and eastern England will stay generally cloudy but dry and less cold, though there will be some bright or sunny spells a times. Temperatures reaching 5-9C across Scotland and N. Ireland, 9-11C across England and Wales. 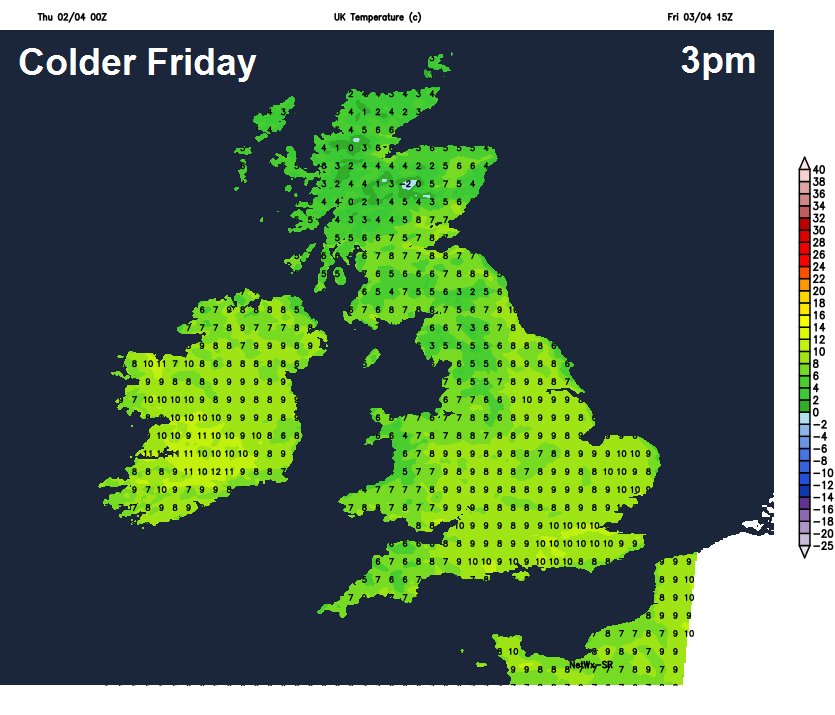 An area of high pressure will slide east across the south Friday night, this will bring clearer skies across southern, central and eastern areas of England overnight, bringing a chilly but bright start to Saturday morning. More in the way of cloud to start across the north and west perhaps. Generally dry and bright or sunny during Saturday, best of the sunshine across southern, central and eastern areas, cloudier in the far west and northwest, with some rain for a time across northwest Scotland. Temperatures reaching 9-11C in the north, 12-14C in the south.

Deepening area of low pressure over the Atlantic will edge in closer to the west of Britain on Sunday while large area of high pressure to the east moves little. This will tighten the isobars with a strengthening south or southeasterly wind dragging in very mild air from way to the south. With low pressure encroaching, it may turn cloudier across the west, with outbreaks of rain spreading north across Ireland, N. Ireland and eventually western Scotland. But for many eastern areas it looks like a sunny and warm day, temperatures reaching the mid-to-high teens, perhaps 20-21C across London and SE England.

Cloud and outbreaks of rain spreading east on Monday morning, followed by brighter weather but with showers across the west. High pressure looks to re-assert itself close to the east Tuesday and Wednesday. But it may turn unsettled again from the west after that.