When the Name our Storms project began it was about windstorms. Low pressure with gales and high gusts and the impacts from those. Then came along Storm Desmond in 2015 with masses of frontal rain which just kept on coming for Cumbria and NW England. After the widespread flooding from that event, the criteria for named storms widened to include snow and heavy rain impacts alongside strong winds. Here we are with another D, Dennis with significant flooding and river levels still to peak, days after the low centre moved away.

The UK Met Office put out initial heads-up style yellow warnings for wind and rain four days before Storm Dennis. It was almost a repeat of the process for Storm Ciara the week before. Looking back at both these major weather events the Name our Storms project worked well to communicate the risk and warnings to the public and kept the distinct ongoing situations well defined. 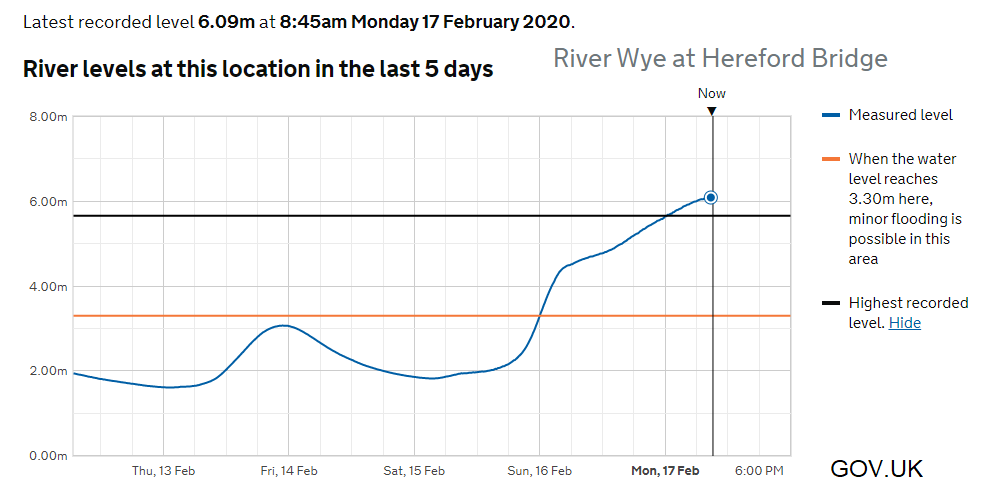 A look back at the weather events of February 2020 as the parts of England are still underwater.

For the middle of February 2020 another storm was on the horizon. Valentine’s day had been wet and windy, half term was starting for many with a forecast of miserable weather filling parents with dread. Only the weekend before UK and Ireland had been hit by Storm Ciara, named for the strength of the winds and responsible for flooding as heavy rain accompanied the gales.

The low centre for Storm Dennis was further NW but much deeper and so although strong, gusty winds were forecast, this event was about the heavy rain and flood risk.

Like Storm Ciara, the impacts from this low pressure continued for days, even as the low centre had disappeared off over Scandinavia. What has been significant about the February rainfall is the lag of days before the peaks in river levels hit the West Midlands on slower responding rivers like the Severn.

At the time, there were dramatic scenes from fast responding rivers such as the Taff in south Wales with sudden flooding as water levels rose several feet in under an hour. There was also surface water flooding as water just cascading off the hills and mountains. For other areas, roads and railways inundated with the amount of water or shorts to the electric systems and businesses hit again in flood prone areas. There were more flood warnings out at one point during the weekend than ever before, the Environment Agency for England said on Sunday 16th.

Even days later, there were severe flood warnings for the River Wye in Monmouth and Ironbridge, with peaks in the river levels not expected to reach Worcester and Gloucester until Wednesday 19th.

Exhausting and stressful. Not just for the Environment Agency staff or emergency responders and council workers but the residents and business owners. Some in areas where the risk of flooding lurks every time it rains, for others a new issue as the river levels pass “highest ever” on the recorded data. And the forecast in the week after Dennis included plenty more rain. 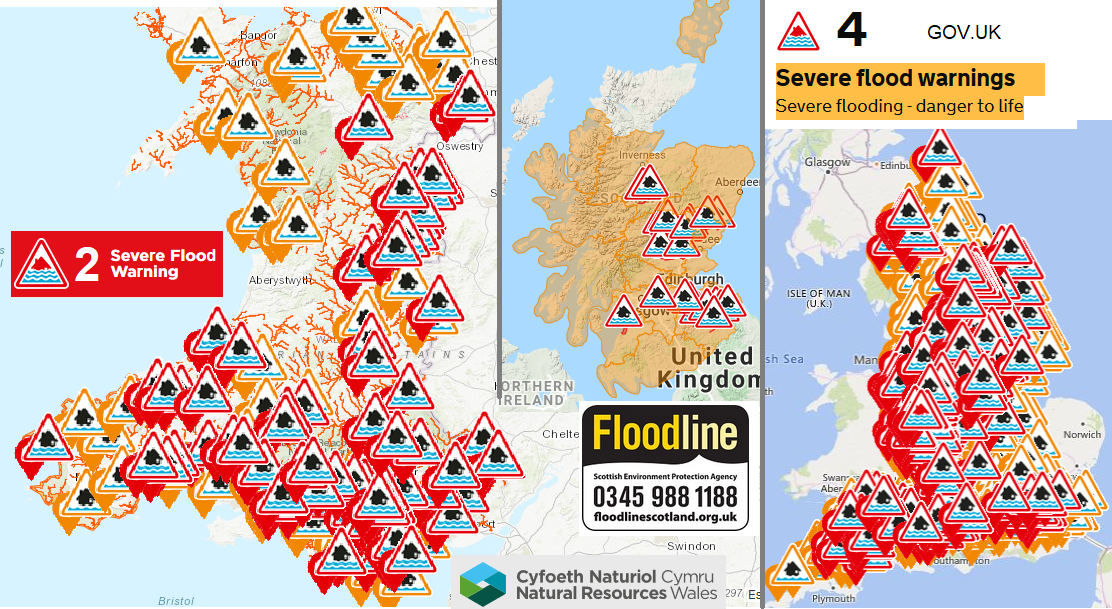 Once more an intense Jetstream was responsible for developing very low pressures over the North Atlantic. The rain on Valentine’s day was from another low which resulted in red warnings for southern Iceland and hurricane force winds (not gusts). Storm Dennis rapidly deepened across the Atlantic and became unusually low. 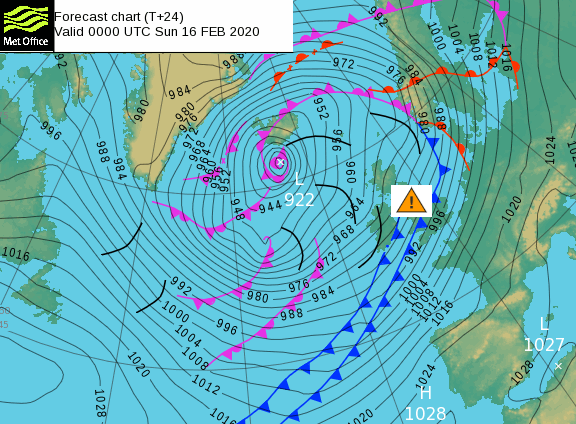 The north Atlantic record is around 914-916hPa, Dennis could have got near to 920hPa. On Saturday as it was situated to the NW of the UK there were strong winds and gales, with gusts of 40 to 50mph across many areas. There were amber warnings for rain for southern Scotland where melting snow was adding to the rainwaters. 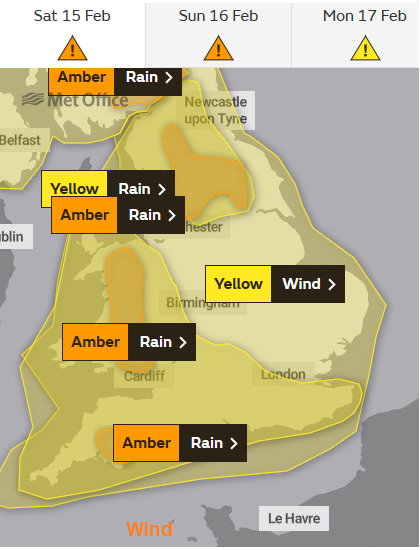 Also, for ambers for England and Wales where the ground was already saturated from the rain in the previous week as the forecast highlighted heavy and persistent rain particularly for Wales. Yorkshire, Lincolnshire and the East Midlands suffered from flooding with the River Ouse in York and the River Trent seeing flood warnings. Slow responding rivers such as the Severn still hadn’t reached their peak even by Tuesday 18th.

Storm Dennis had a red warning for the rain and flooding impacts by Sunday morning for south Wales.  This is unusual, showing a Danger to Life as torrents of water came down off the Brecon Beacons and the river levels rose very quickly in the valleys. . 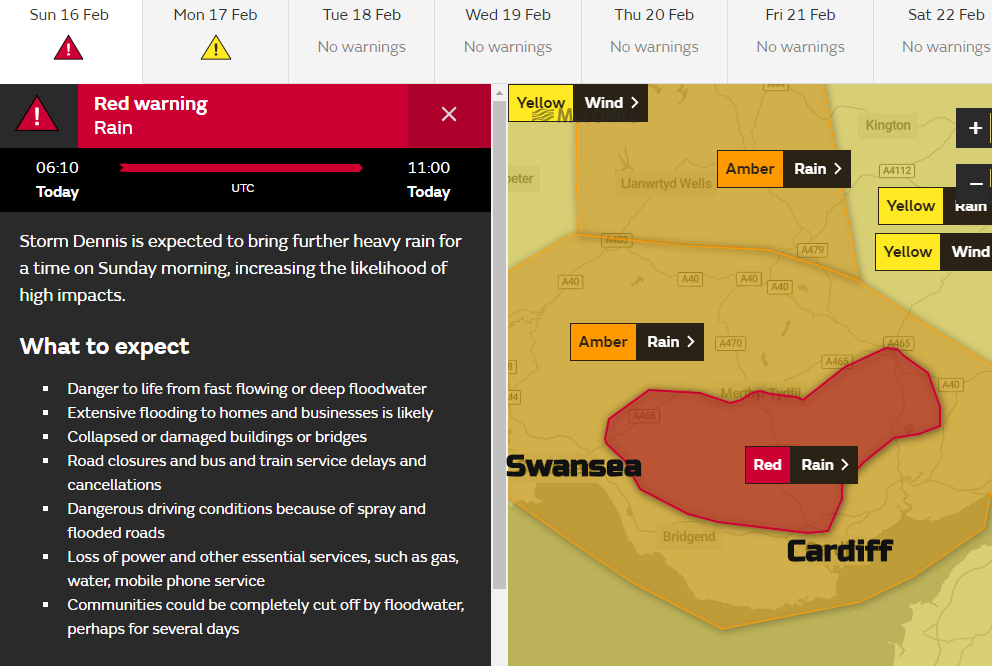 There was a 91mph gust at Aberdaron, Gwynedd and numerous flights were cancelled or had lively take-offs and landings. Most of the UK was covered by a Yellow wind warning on Saturday, and stayed for Sunday over more of Scotland, Northern Ireland and the rest of western Britain. As the low centre from storm Dennis moved past northern Scotland on Sunday night there were more strong winds, with severe gales for the Northern Isles early on Monday.

Storm Dennis will be remembered for the widespread flooding and February 2020 for these two storms in quick succession with more rain to follow.