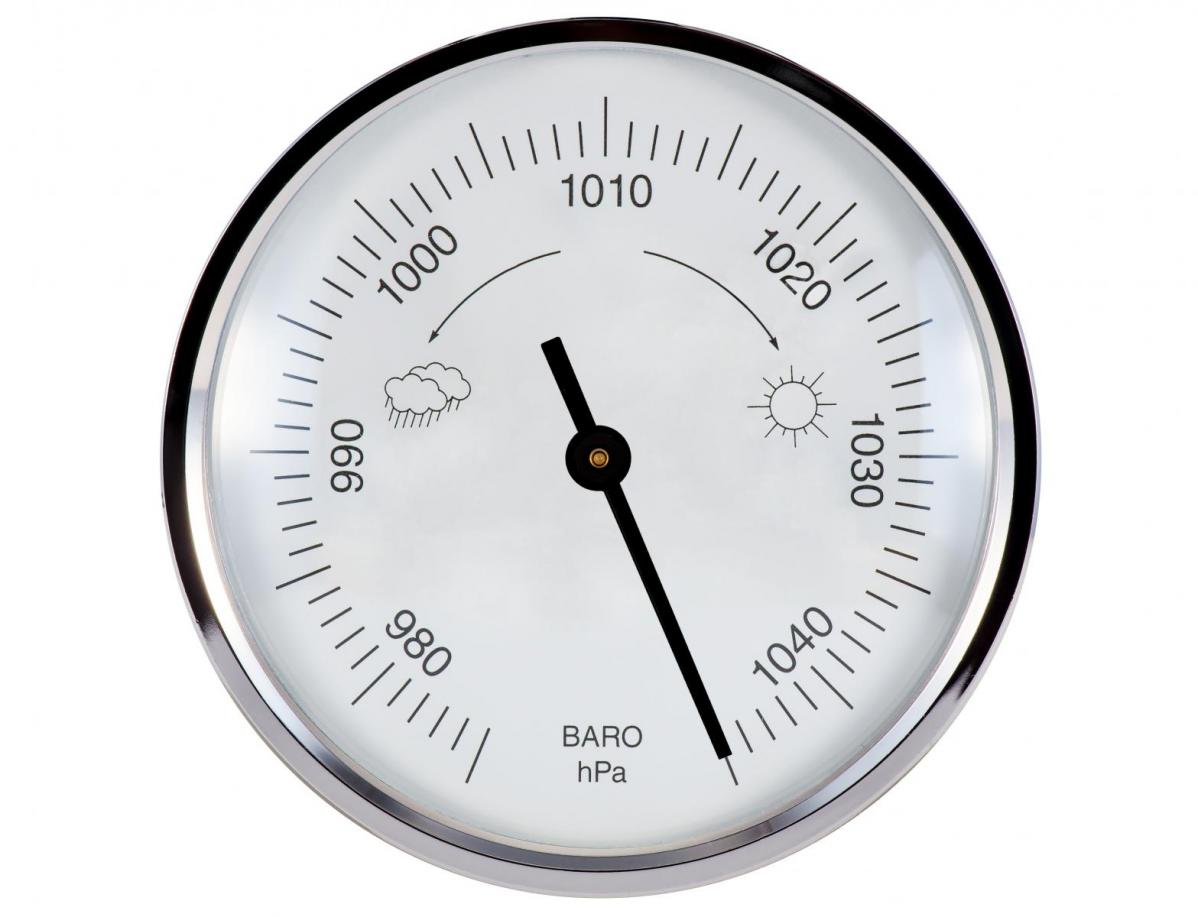 High pressure has arrived with a vengeance this weekend. By tonight, it's likely to climb to 1050hpa which is close to the highest pressure ever recorded in the UK. That record dates back to January 1902 where Aberdeen reached 1053.6hpa.

As it stands this morning, many stations are reporting 1045hpa. Pressure is set to rise through the day, with the southwest of the country likely to be the spot to reach or maybe even exceed 1050hpa. 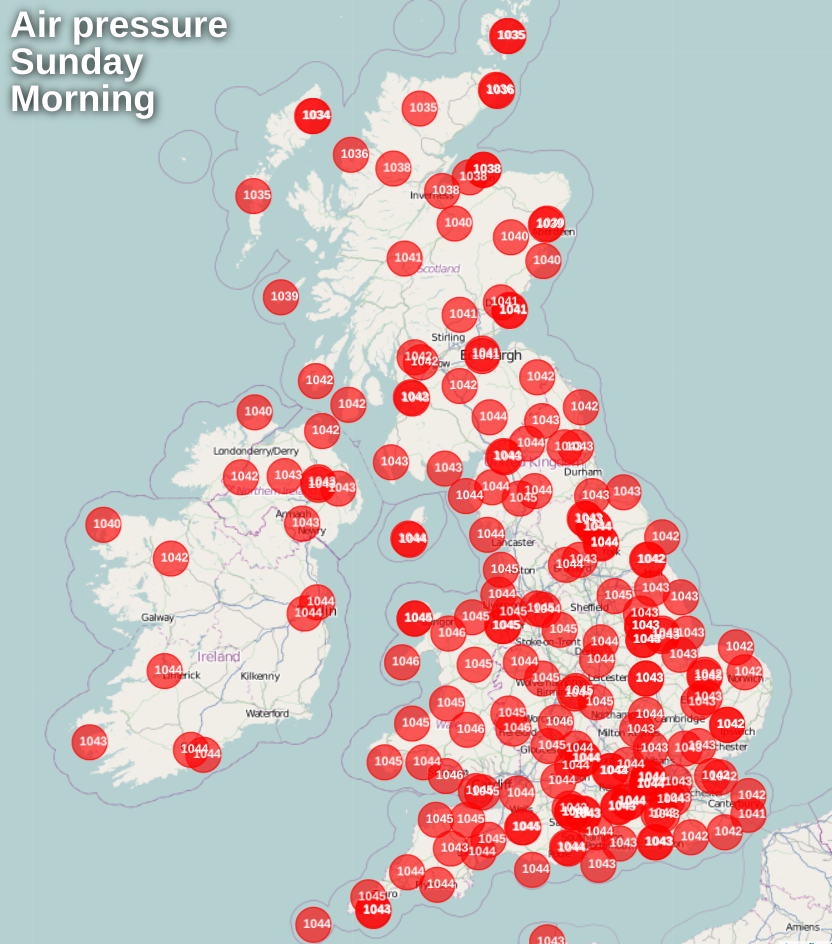 You can keep track of the latest air pressure readings across the UK and Ireland here.

If you're a bit of a weather geek like me, all this is fun to watch, but if you're not, you probably want to know what it all means in terms of our weather over the coming days. Well, it's set fair in the main, it'll be chilly with some frost and fog at night - especially in southern and central regions. By day, temperatures will typically not be too far from average. So, despite what you may have read in certain tabloids - unless you're on a mountain in Scotland, there's no snow in the forecast during the upcoming week.

Today (Sunday), much of the UK has started with sunny spells and a frost. There are some fog patches in the West Midlands and the far North of England though, which will be slow to clear. There's also more cloud across the northwest of Scotland, Northern Ireland and Ireland, with some showery rain (with sleet and snow over high ground) running into the north of Scotland. The showers will tend to die out through the day, but the cloud will spill further southeast.

Temperatures today will range 4-7c typically, but those who keep the fog for longest will stay a touch cooler. Overnight, the clearest skies will be in southern and central England along with the southern half of Wales, with a widespread frost and again some fog here. Further north, there'll be more cloud around, so the frost will be patchier, and temperatures will rise the further northwest you are with the far north of Scotland not seeing lows drop below 8 or 9c. 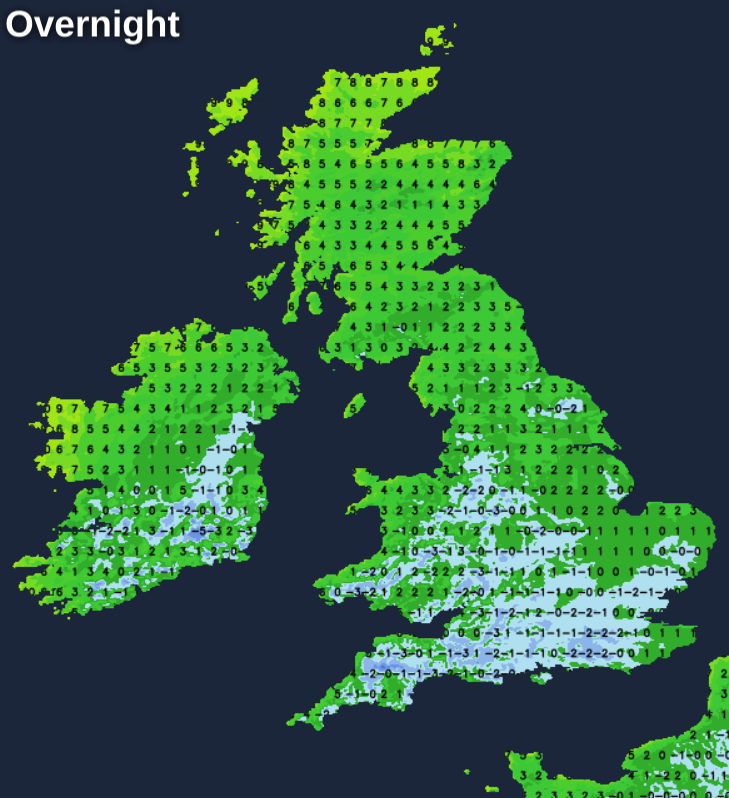 Monday then brings another day of sunny spells once any fog and low cloud lifts. The cloud across the northern half of the UK should thin and break as well, becoming more limited to the west of Scotland and the far northwest of England. There'll be some patchy, light rain possible at times in the far northwest as well. Temperatures will be on a par with today.

There'll be another widespread frost across the southern half of the UK again overnight. Once again, with more cloud further north, temperatures will be milder, and we'll also see a front trying to push down from the northwest, bringing some patchy rain on it. 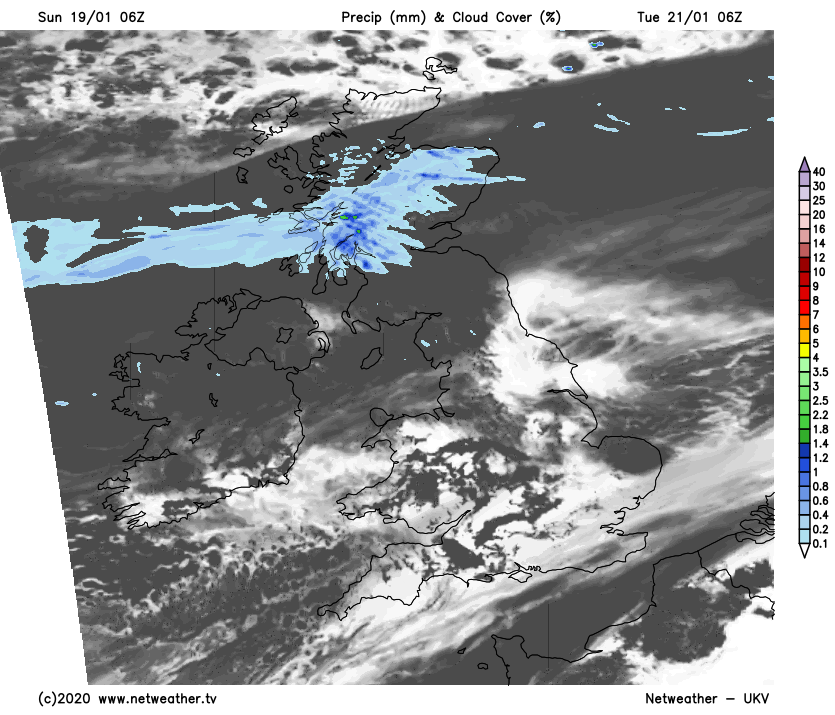 That front will try to head further south during Tuesday, but as it runs up against the high pressure, it'll be a struggle. It may well bring some patchy rain across the northern half of and perhaps also central Scotland and will spread a fair bit of cloud south too. That's likely to limit the coldest overnight temperatures to the far south of the country, where frost and fog will again be widespread.

Into midweek there'll be a good deal of cloud and with it some milder temperatures with double figures expected in places. Overnight, there'll still be some patches of frost, fog and murk, especially in the south, but perhaps not as widespread as during the first half of the week.

If you're wondering when the high pressure may start to release its grip and return us to wetter, windier weather again, it's never an easy call. But, it does look reasonably likely that the process may begin next weekend and continue into the following week, with the northwest first to see unsettled conditions and the southeast keeping the settled weather for longest.