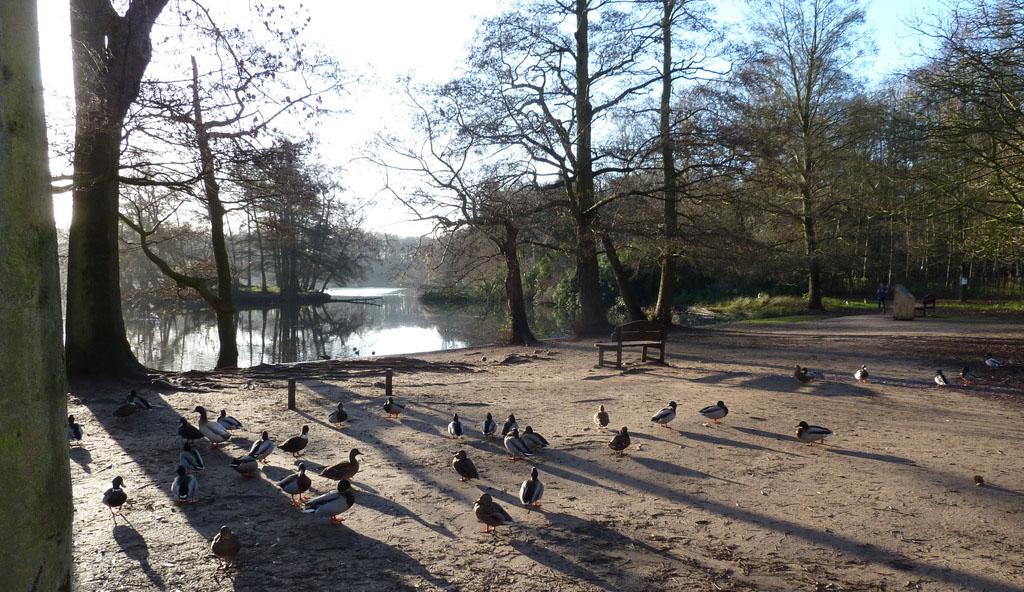 Quieter start to this week but watching Christmas Eve rain. No sign of a White Christmas

Southern England has seen a lot of wet weather with many flood problems for the end of the week. The M23 has now re-opened after being submerged but Police are asking people to drive to the conditions at this busy time of year.

“River levels remain high as a result of the ground being saturated and reacting to further rainfall. Consequently, the risk of flooding remains” There aren’t any weather warnings from the Met Office at this time (the overnight rain one lapses 9am Sunday) but there are over 90 Flood warnings for England after the rain on Friday and late Saturday with river levels expected to peak today (22nd) in many places. “Sunday and Monday should stay largely dry, but rain is forecast for Tuesday (24th), which may cause river levels to rise again.”  Environment Agency 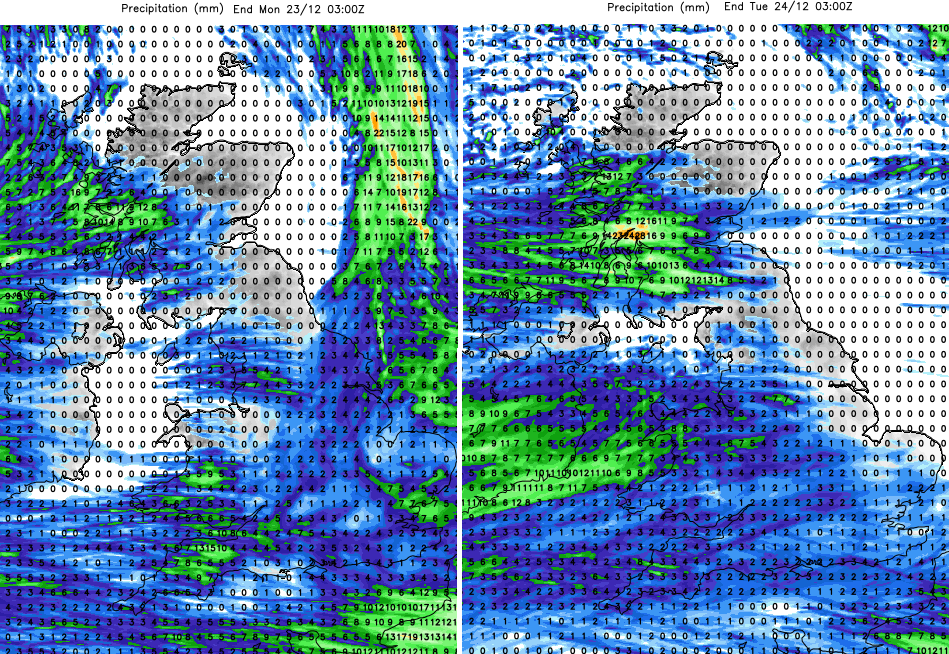 As Saturday’s rain clears away from SE England the brisk winds ease down for southern England. For many, it is a still start but with lingering cloud and dampness. Rain clears eastern England as clusters of showers appear from the west, but many places will have a fair day with bright spells and dry weather. Temperatures will be 4 to 8C and overall not a bad day. 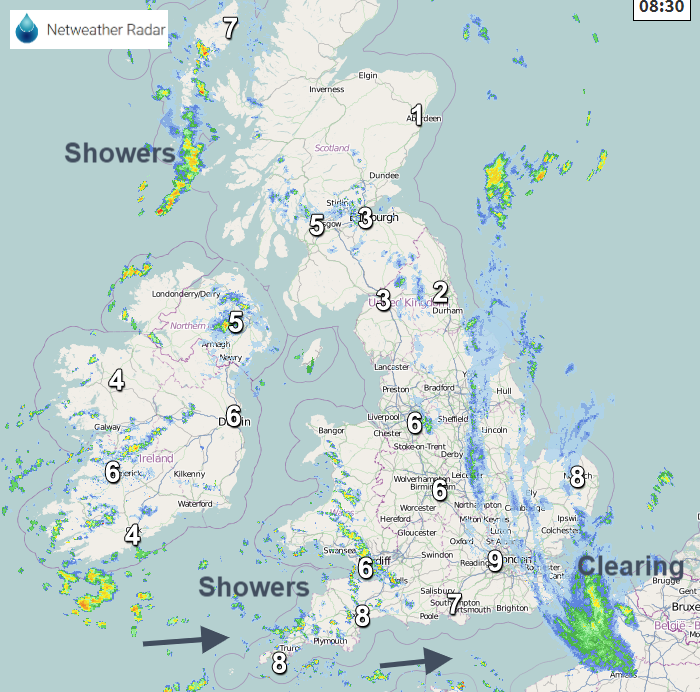 For those heading further afield, the stormy winter weather has been bombarding Spain and Portugal with a series of storms hitting NW Iberia. Elsa did affect western Ireland as well last week but now AEMET, the Spanish Met Service are mentioning Storm Fabien, from their storm naming project with Portugal and France

“a new and deep storm called "Fabien" will lead to a new storm of wind, sea and rain over the Peninsula” Saturday and Sunday. Monday is expected to end the storm and for several days a stability situation prevails.” 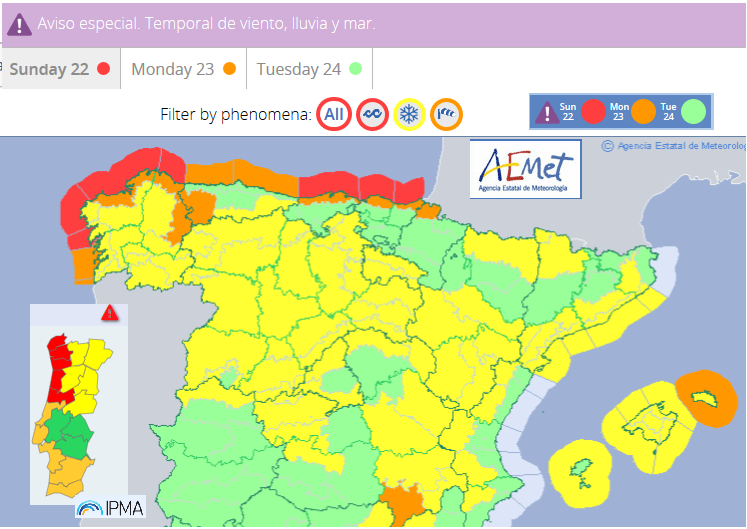 Monday will be a blustery here in the UK with showers from the west and a good deal of fine, bright weather with temperatures of 5 to 7C.. With cooler air in the north there will be wintry bits over the highest hills and Scottish mountains, not amounting too much. By Monday night the next frontal system will be heading in from the SW bringing more rain. This could bring some wet snow overnight to hills on the leading edge but there is low confidence about how far north it will reach, so don’t rely on Weather app timings for Monday night/early Tuesday at this stage. The frontal band may just flatten out and bring a spell of rain to Southern England, which needs watching due to the sensitive water levels and so flood risk. Or the low develops more, and the rain reaches up to Northern Ireland, even southern Scotland with a higher risk of hill snow.  There will be a frost in the north and much milder air for southern Britain ready for Christmas Eve. 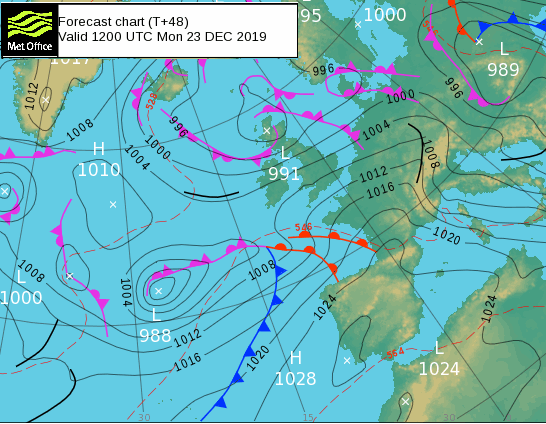 So, some uncertainty for the start of Christmas Eve. There will be much milder air to the south of the frontal band and colder conditions to the north. We’ll have to firm up on details of the rain band, so do keep an eye on the forecast if you are traveling on Tuesday and the flood information. 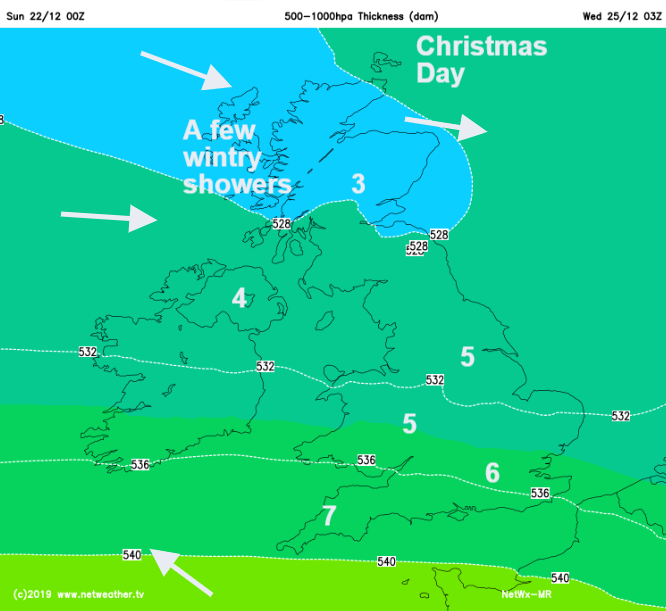 For Christmas Day there should be a lot of fair, dry weather with more rain from the SW by Boxing Day. The only chance of a White Christmas “one snowflake falling” looks to be for western Scotland, over the Highlands. A wintry shower might make its way to Glasgow on the brisk breeze in the morning but as high pressure builds the weather continues to settle.