More rain and winds this week, with a mild start

In the wake of Storm Desmond NW England is still in the midst of a flood event. People displaced, being helped from their homes, roads and railways submerged or damaged.  For businesses and properties which flooded on Saturday, now it is the depressing, dirty and saddening clear up time as Keswick, Carlisle and Hawick, in particular, try to recover, once more. Inspections and recoveries will continue in earnest today.

Eyes will be on the weather forecast. Unfortunately, there is rain coming in from the Atlantic.

Already today there has been patchy rain from a warm front, pushing its way northwards through the UK. Temperatures to the south of this are in double figures with the West Midlands already at 14C at 7am. Scotland and N.England starts in the cooler air, with patchy ice but will soon feel the warmth arrive.. There will be a lot of cloud about to start with but breaks will appear for England and Wales. Here the temperatures will reach 13 or 14C, maybe a 15C too, very mild for December. 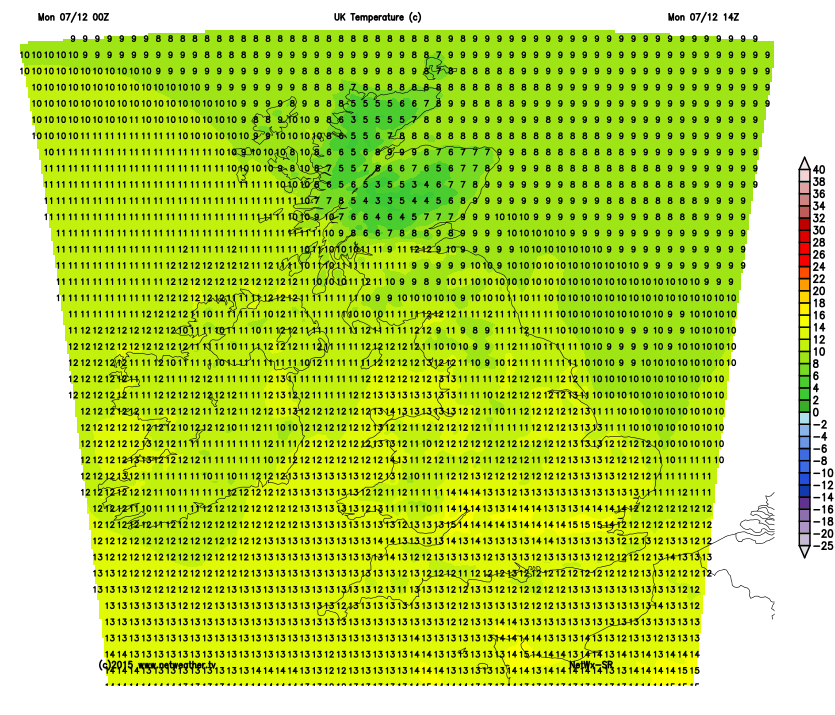 Most places should brighten up through the afternoon as the warm front rain clears through the Northern Isles. It will actually feel quite strange and be a fair day for many until the winds begin to pick up once more. The SE or Southerly winds will freshen, and be strong over N.Ireland by lunchtime.

A deep area of low pressure is heading northwards to Iceland bringing the UK gales and heavier rain from its cold front. The Icelandic Met Office have a warning for Iceland: “ Violent storm or hurricane force winds are forecasted for all areas of Iceland late tomorrow “ with mean winds (not gusts) of nearly 80mph. This low won't bring quite such strong winds to Britain, but it will bring more rain to areas not even recovered from Storm Desmond and its seems there could be another low pressure nipping through midweek bringing even more rain.

By late afternoon the strong S winds will be taking hold for the coasts of W.Britain with gusts of 50 to 60mph. Gales through the evening for the Irish Sea, N.Channel and the Minch as everywhere has a blustery but mild night. Temperatures of 7 to 12C. There will be a band of rain passing over N.Ireland at teatime, W.Scotland, W.Wales and Cornwall mid evening and then moving over Cumbria and S.Scotland tonight. Rainfall totals over the hills look to be 25-25mm. The band of rain continues across Britain with showers following form the west. 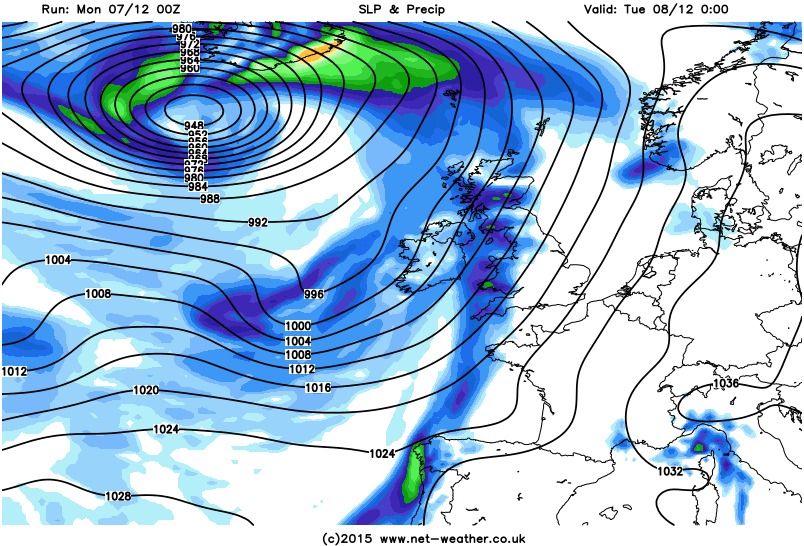 Tuesday starts off blustery with showers and bright skies, although the SE will have more cloud first thing. It will be mild until the winds veer Westerly in the afternoon and cooler air filters in. Again NW England, S.Scotland could see another inch of rain 25mm with W.Scotland seeing 40mm. Tuesday night turns clear and cold for a time. 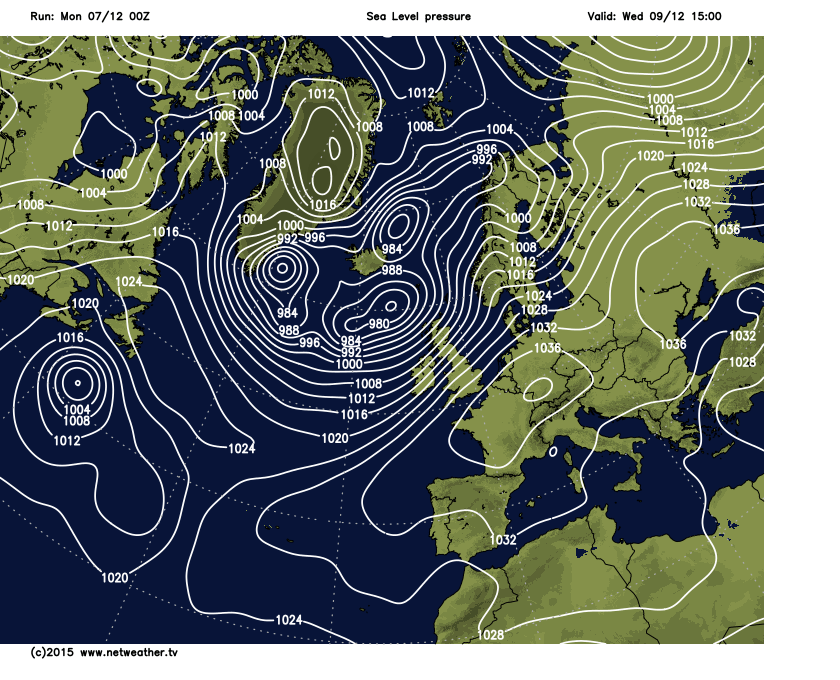 Then during Wednesday another low looks like it will head just north of the UK, bringing SW gales or severe gales and heavier rain to the NW half of the UK. There are worries about the midweek rainfall with totals of nearly 100mm showing up for Cumbria Wednesday into Thursday. This low is still a few days away. Friday looks drier and colder.

A look back at Storm Desmond

The news coverage from Saturday showed flooding from Scotland, N.Ireland, Isle of Man, N.Wales and N.England. The trailing fronts from Storm Desmond have brought a weekend of severe weather to many parts of the UK. The gales and damaging gusts began on Friday and returned during Saturday as a secondary low developed. And boy, did it rain. Worst hit were Cumbria and the Scottish Borders, where there were numerous severe flood warnings from the Environment agencies as rivers burst their banks and Met Office Red weather warnings for the sheer amount of rainfall.

Trains were cancelled with landslides on the lines or rails flooded, some services are still suspended. Bridges are closed due to debris or structural damage. Ships were damaged in the high seas and thousands of homes were without power for a time. Roads that were submerged now have reappeared but are damaged and covered in sludge. The Army came to help in the NW as sandbags and flood gates or defences were just not enough. For businesses and properties which flooded on Saturday, now it is the depressing, dirty and saddening clear up time as Keswick and Hawick in particular try to recover, once more. Inspections and recoveries will continue in earnest today.

RAINFALL TOTALS
Not yet verified but the Environment Agency gauge at Honister measured 341.40mm of rain.

203mm is 8” of rain. Usually in December Keswick would expect 173mm of rain, Glasgow 104mm, this weekend’s rain has been phenomenal

WIND STRENGTHS
Capel Curig, N.Wales recorded a gust of 90mph at 1am on Sat, NE Scotland and Co.Down G78mph and S.Yorkshire G77mph. These sites all reaching severe gales for their mean speeds and even along the south coast of England, rather exposed, the Needles lighthouse saw Storm Force winds.

Most of the Scottish football matches were postponed due to waterlogged pitches or high winds. Part of a Cineworld cinema roof came loose in Glasgow on Saturday afternoon. In London, a man died when a gust of wind blew him into the side of a moving bus.

The weekend's severe weather has now cleared. Hawick has now cleared it's severe flood warning status. However, Cumbria keeps it's High then Medium risk of flooding as river levels stay high, there are still impacts to communities and roads closed. By Tuesday, the flood risk over N.England should have fallen to LOW. Environment Agency 3 day flood risk. The River Eden and Ullswater still on Severe Flood warnings this morning. No Severe warnings for Scotland but plenty of Flood warnings for central inland Scotland and the Borders. 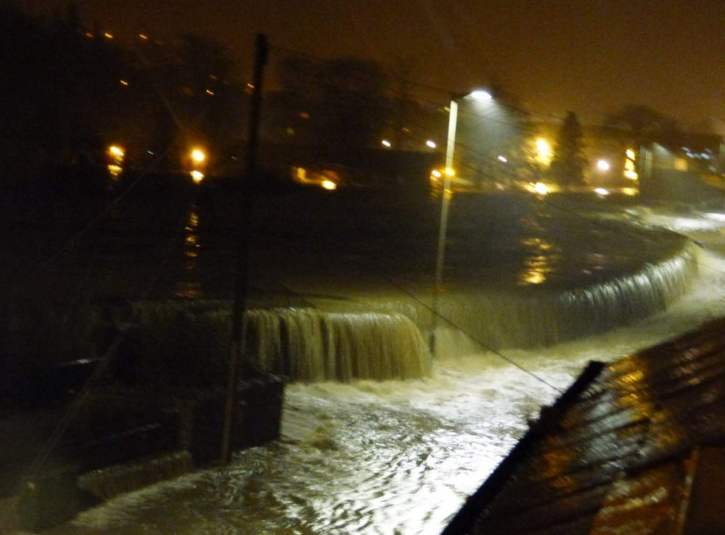 Video forecast: No let up, more rain to comeAftermath of Storm Desmond; totals, heights and speedsRecord Rainfall From Storm Desmond - The Cause And ConsequenceDevastating floods brought by Storm Desmond