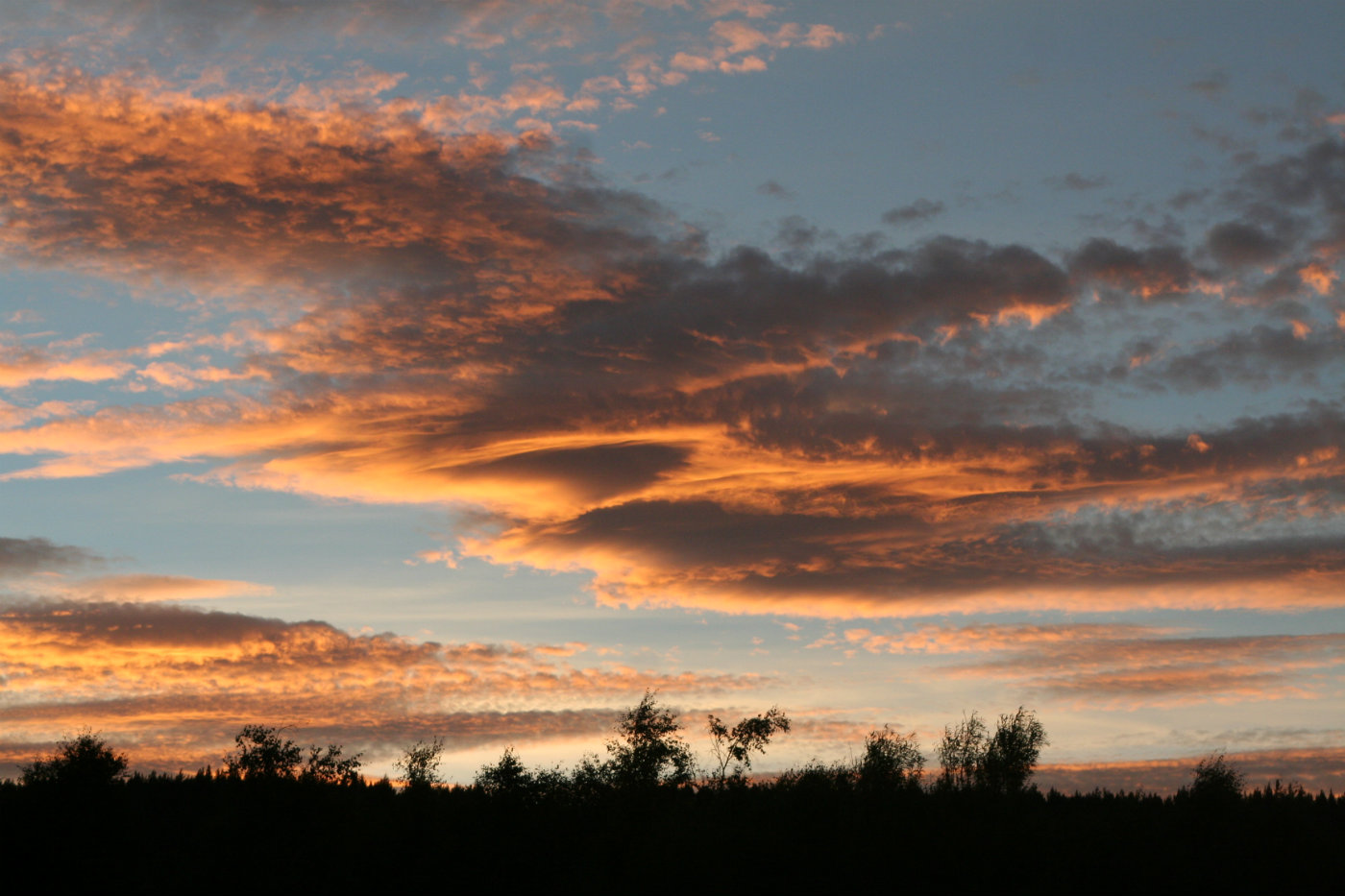 October is drawing to a rather mild close across much of the UK this week, with temperatures continuing widely above average for the time of year to end this week, thanks to mild southerly winds. This time last year was also rather mild, with a warm end to October 2014 culminating in the warmest Halloween on record – when a temperature of 23.6C (74.3F) was recorded in Gravesend, Kent and Kew Gardens, Greater London, surpassing the previous record of 20.0C. This was thanks to warm winds blowing up from Spain. We are unlikely to see temperatures this high for the last day of this month, but we could still be looking at temperatures reaching the high teens in the south.

So what are the prospects of more seasonal weather as we head into early November? Well, it looks like temperatures will remain generally above average across the UK for the first week of November at least and probably beyond too, as the 10 day temperature anomaly chart below shows:

Numerical weather prediction models suggest high pressure dominating much of mainland Europe next week still, with the jet stream staying close to or just north of northern UK and low pressure close to the west or northwest. A mild southerly flow continuing to feed across the UK sourced from southern Europe, bringing maximum temperatures into the high teens across southern parts most days during the first working week of November, which is well above average for the time of year. With high pressure building in, it looks mostly dry as well as mild for the first few days of November across much of the UK, away from the far NW, from Sunday through to mid-week. On Sunday, the first day of November, we could even be looking at 20C being reached somewhere in the south. But as we reach Wednesday, there are consistent indications, from recent GFS and ECM runs, for a shortwave trough and a shallow surface low to run N/NE across the UK, bringing  with it outbreaks of rain north across many parts. But turning drier again from the south Thursday and into Friday, as high pressure rebuilds. Though Ireland, N. Ireland and the NW mainland UK exposed to bands of rain coming in off the Atlantic – which may eventually spread east across the rest of the UK later on Friday and into next weekend. Northern and western areas always having the greatest chance of rain as the 10 day precipitation forecast below shows: 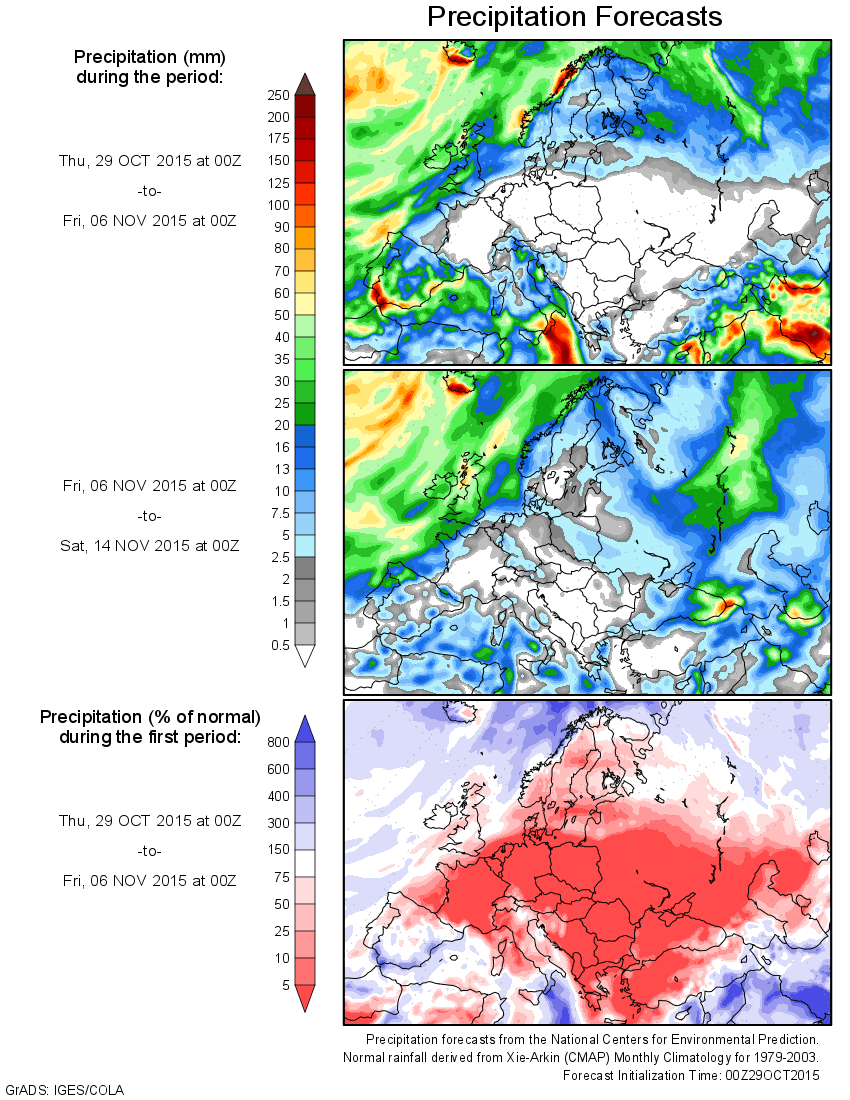 The NOAA CPC prognostic 8-14 day H500 chart (below) from Wednesday, which is often a fairly good medium range indicator to the likely 500mb pattern in this time frame, suggests little change in the 500mb pattern going into week 2 of November, broad upper trough to the W and NW of the UK and upper ridge to the E and SE, with the UK in a mild S or SW flow but unsettled at times as fronts try and push in from the west or southwest. 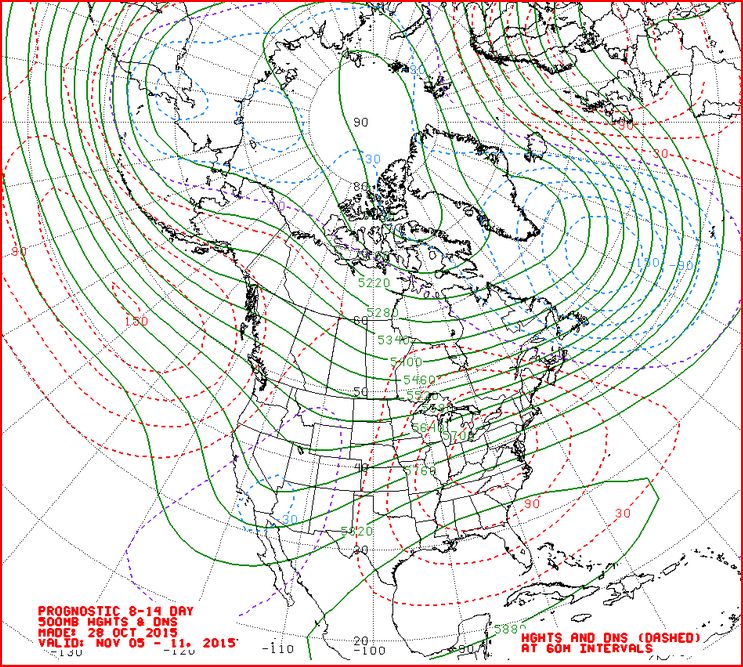 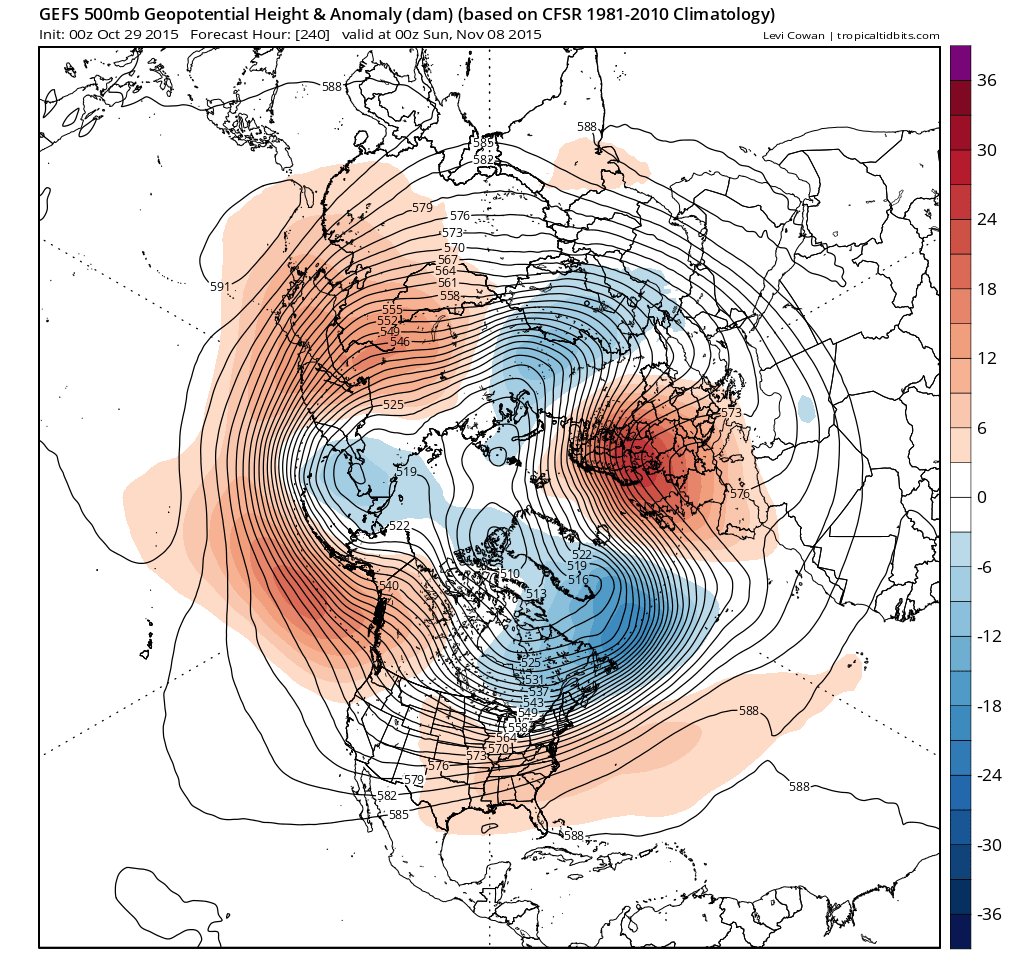 00z GEFS mean and anomaly (below) and last night’s ECM ensemble mean out to the 12th November (day 14) suggest a similar pattern towards the middle of November, the upper longwave pattern remaining stagnant with trough/low pressure close to W and NW and pressure higher over mainland Europe, but with a +ve anomaly over Scandinavia. So a mild and above average, temperature-wise, first half of November could be on the cards, though unsettled at times, with greatest chance of rain in the north and west, driest towards the SE. 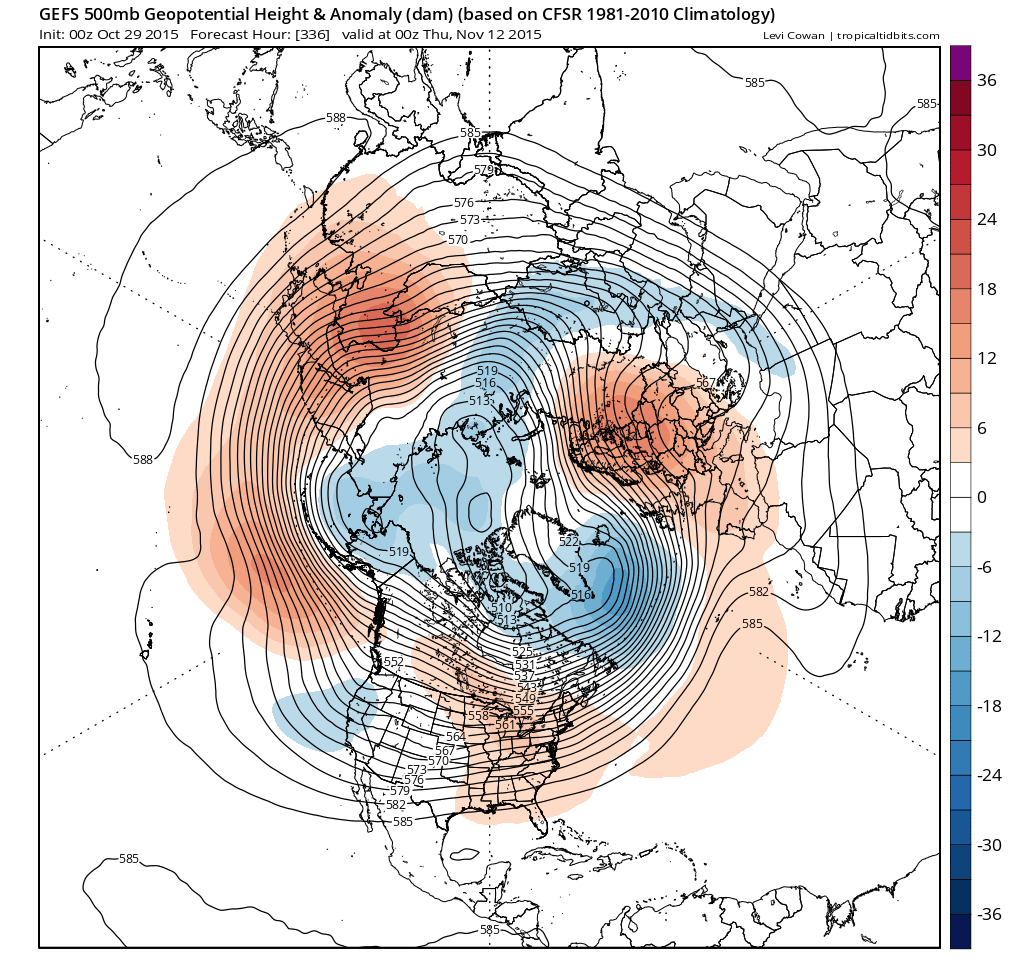