Low pressure continues to dominate the weather scene as we start Wednesday as it has done since the start of the week, with yet more rain spreading in across southern parts this morning, following nearly or over a month's worth of rainfall  across some parts of the south over the last few days. With a few spots in southern England seeing up to 60mm, which is over 2 inches, just in the last 2 days, with the same places perhaps seeing another inch before today's out. 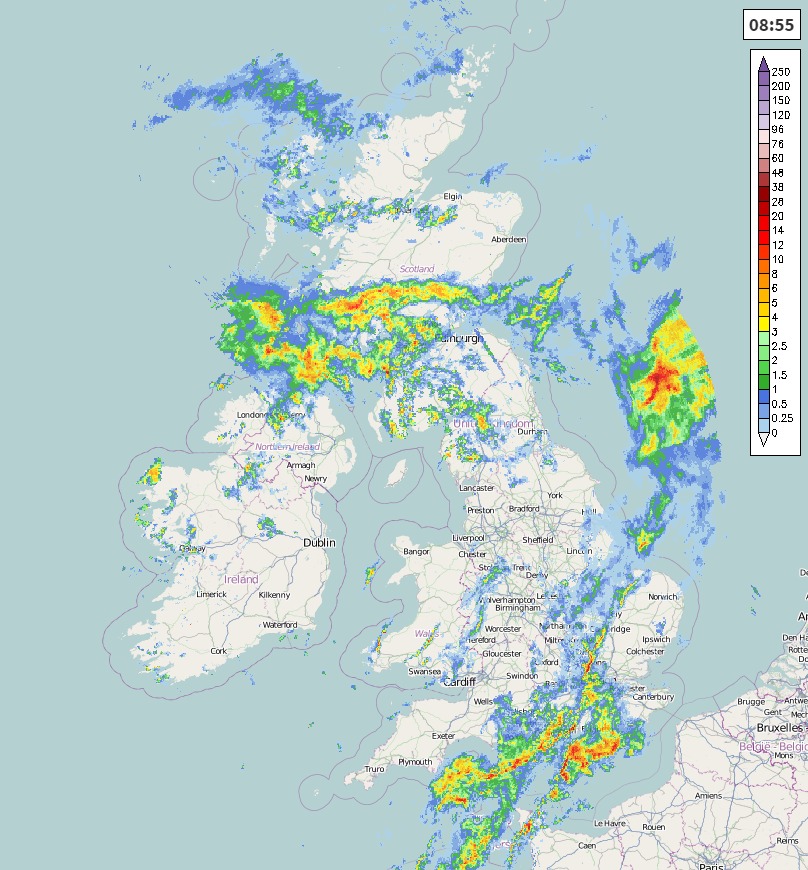 So an umbrella will come in handy, as heavy rain will push across many parts this morning, but be aware of a strong to gale force southerly wind across England an Wales, with gusts of 40 to 50mph over southern and western coasts and hills. 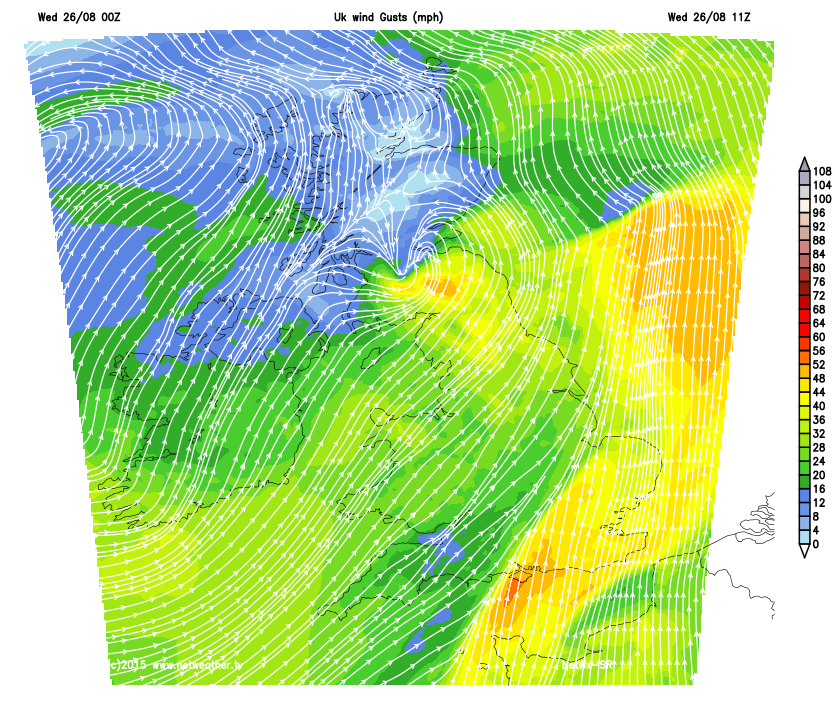 The rain will gradually clear from the west across most areas through the day,  though will linger into the evening across northern Scotland and the far SE of England. Otherwise brighter and fresher conditions with sunny spells will spread in elsewhere, with strong winds easing to become confined to the far southeast. Though some heavy and perhaps thundery showers will affect Ireland, Northern Ireland and western costal areas of mainland UK. Temperatures no great shakes, but with some sunshine this afternoon we could reach 19-21C across England and Wales, 16-18C for Scotland and Northern Ireland.

Later this evening, the rain and strong winds will clear the far southeast, with many eastern areas having a dry night with clear spells. However, northern and western areas will see blustery showers at times feeding in from the west, some which maybe heavy and thundery. 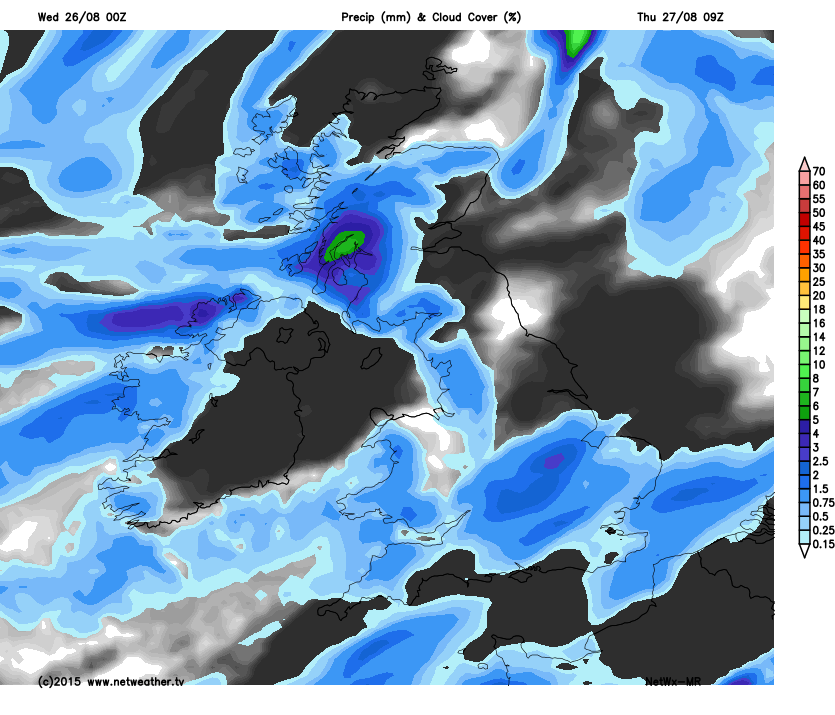 Thursday will be most unsettled across the northern half of the UK, with low pressure to the Northwest bringing frequent showers or longer spells of rain to Scotland, N. Ireland and the far north of England. Showers possible elsewhere across England and Wales, but fewer and mostly towards western parts, with some sunny spells, though cloudier towards the south coast of England, where we could see some rain grazing the Channel coast. Temperatures reaching 15-17C in the north, 17-19C in the south, so rather disappointing for late August.

Friday looks like seeing sunny spells and scattered showers, mostly towards the Northwest. Breezy generally and windy in the northwest,  though feeling warmer in the southeast, with temperatures reaching, 20-22C, elsewhere, 16-19C more likely. 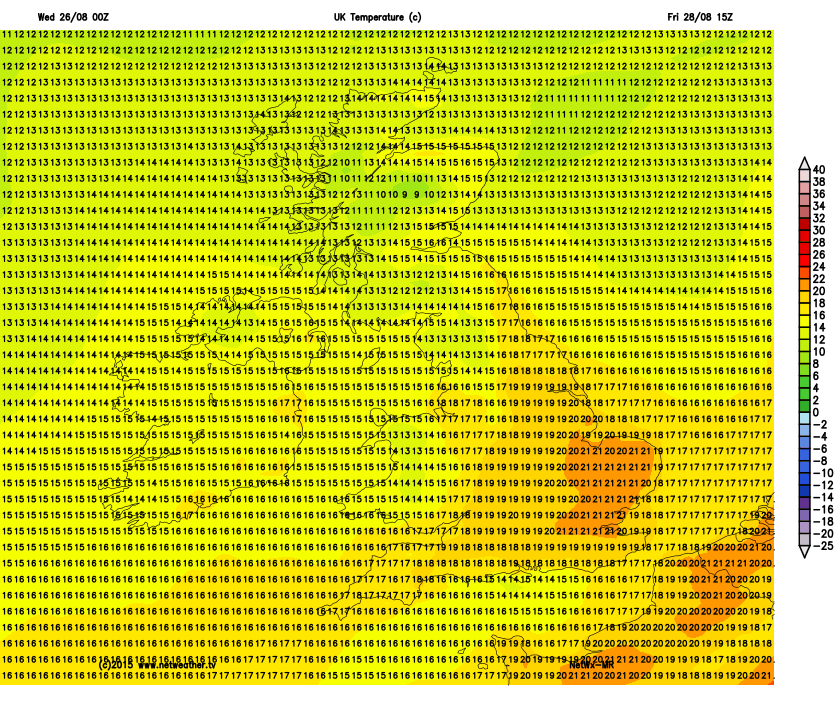 The Bank Holiday Weekend is looking rather mixed and increasingly unsettled, Saturday looks OK, bar a few showers in the Northwest. But heavy and thundery rain looks to spread north overnight into Sunday, with further heavy thundery showers or longer spells of rain into Bank Holiday Monday, though where the sun comes out, it will feel warm in the south.