Even more rain from SW but sunshine further north

This week we keep a westerly flow off the Atlantic that will feel fresher, although still with warm sunshine, and bring further rain and showers along too.

There’s already been a lot of rain over southern Britain on Monday, and a fair bit for the far north of Scotland. There have been horrendous driving conditions, thunderstorms, reports of funnel clouds and localised flooding. In between it has been fine, even sunny and today will see a similar story. 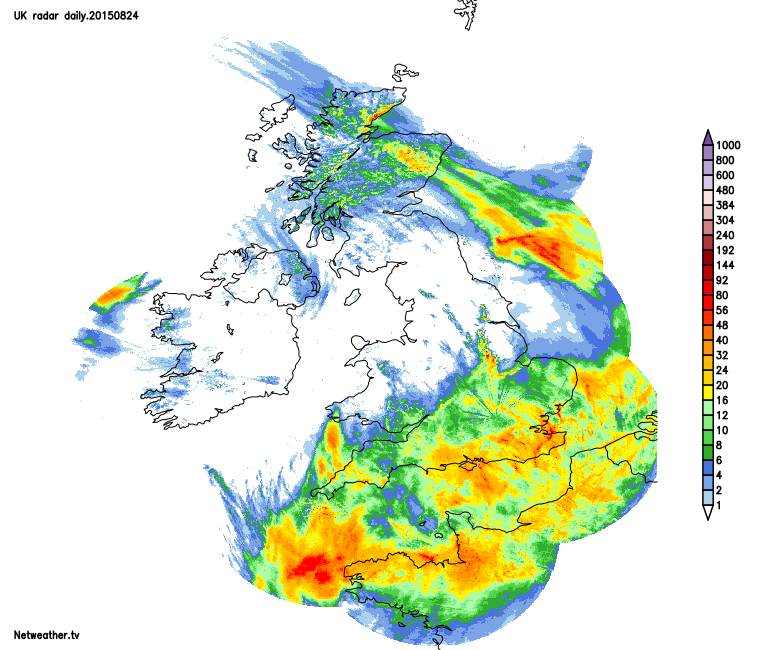 There is a frontal system still bringing a line of rain over NE Scotland which will pull northwards today over Shetland, finally leaving the mainland. A ridge of high pressure has brought some quieter weather to the UK overnight but there is now another low pressure heading in from the SW. This will bring further bands of cloud and rain as it moves north and east today. This rain will spread over SW England and Wales this morning, heading over the Midlands, SE England and E.Anglia this afternoon and up to N.Ireland and NW England this evening. Ahead of the rainband it will be fine with sunshine, lasting the longest over much of N.Britain.

Wales will have a fine morning with sunshine and light winds but the cloud will increase late morning as the rain arrives in Pembrokeshire for lunchtime. The S winds will pick up and a fresh SW wind will set in later today. Temperatures will reach 15 to 17C. The rain band will spread north with the heaviest rain in the south.

Much of Scotland will have a fine, sunny day with light winds and temperatures of 15 to 17C. There will still be the rain and cloud in the north and a brisk NW wind, keeping temperatures at only 13C. The Northern Isles will have a wet day.

England will be fine and sunny this morning away from the SW where the rain arrives. Eastern England will see the top temperatures today up to 20 or 21C. There will be blustery winds over southern and eastern England, from the S or SW. Southern counties of England will have another 5- 10mm of rain in places, more for Cornwall and Devon. As the rain band moves northern and east through England it will break up with some parts just turning grey and damp and other areas seeing heavier pulses of rain. NE England will stay dry for much of the day.

N.Ireland will have a cool day with temperatures up to 15C as the S then SE wind picks up. After a lovely morning and lunchtime, the rain will arrive at in the south mid afternoon. The band will steadily move NE covering all parts by the evening, before clearing away to Scotland.

This evening and overnight the band of rain moves NE through Scotland with some further heavier bursts. Linking back from the rain further north, a waving front will push into SW Britain, bringing even more wet weather. It will seem never ending this week. This pushes up over N.Ireland, through Wales, the Midlands and Yorkshire for a wet midweek morning rush hour. One portion of the rain heads over Scotland and another continues over eastern England. SE England will have an unsettled afternoon but many other parts of the UK brighten up and see more sunshine. 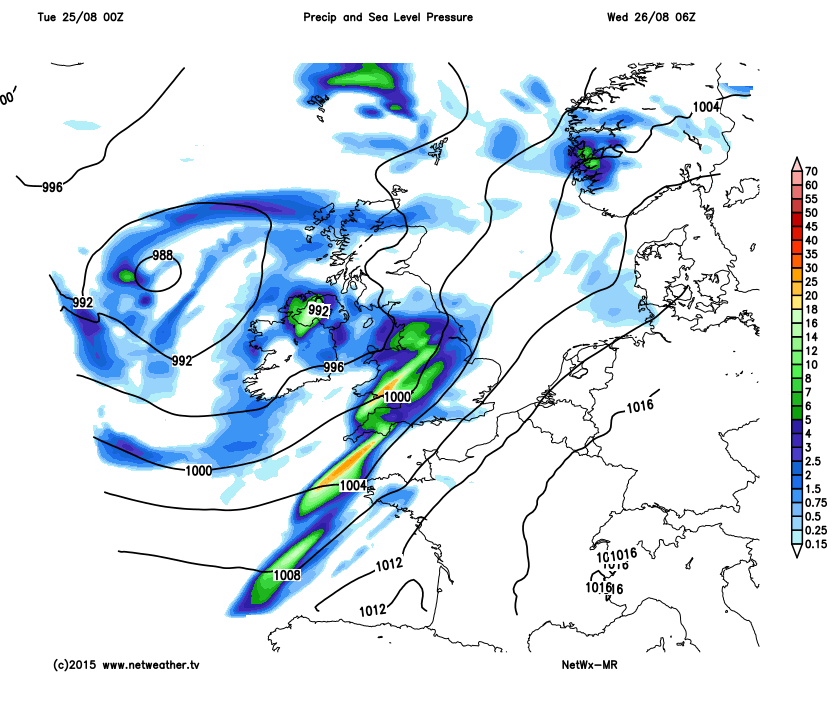 It will be a blustery but warmer day over England and Wales around 20 or 21C. A bit of a breeze for N.Ireland and Scotland and cooler at 15 or 16C

For Thursday and Friday, there will be a brisk SW wind bringing in a scattering of showers from the west. Temperatures will peak in the high teens and there will be long sunny spells. High pressure will try to build in from the SE for the end of the week.