Over 10,000 lightning strikes were recorded yesterday, with Bramham in West Yorkshire topping the scales with 62.4mm of rain. Today brings more heavy rain and the risk of thunderstorms, up from the south, then as we move through next week we keep low pressure well in charge so staying unsettled. 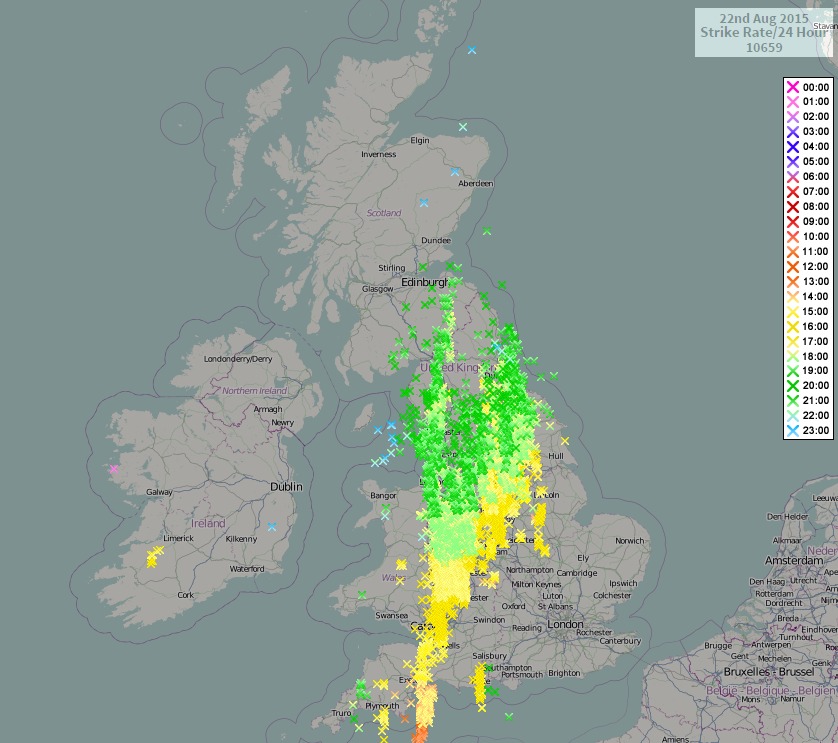 It's not all heavy rain and storms today though, to the north of the rain, and particularly through the far north of England and Scotland it's going to be a warm day with plenty of sunshine. Highs will reach 18-22c widely here, with 23-25c in some spots, cooler at 16-19c in the wetter parts.

The wet weather which cleared western Scotland earlier today is still plaguing Northern Ireland and will continue for a good part of the day before eventually clearing south into Ireland. It's also been a wet night in southwest England but the front is moving away through this morning leaving a scattering of showers in it's wake. As it pivots, it brings the rain into other parts of southern England before making it's move further north during the day. Within and ahead of that main rain band is where we'll be seeing the main risk of storms.

Once again, a storm forecast has been issued to cover this - and there is the risk of some more severe storms, with torrential rain, frequent lightning, hail and gusting winds possible. 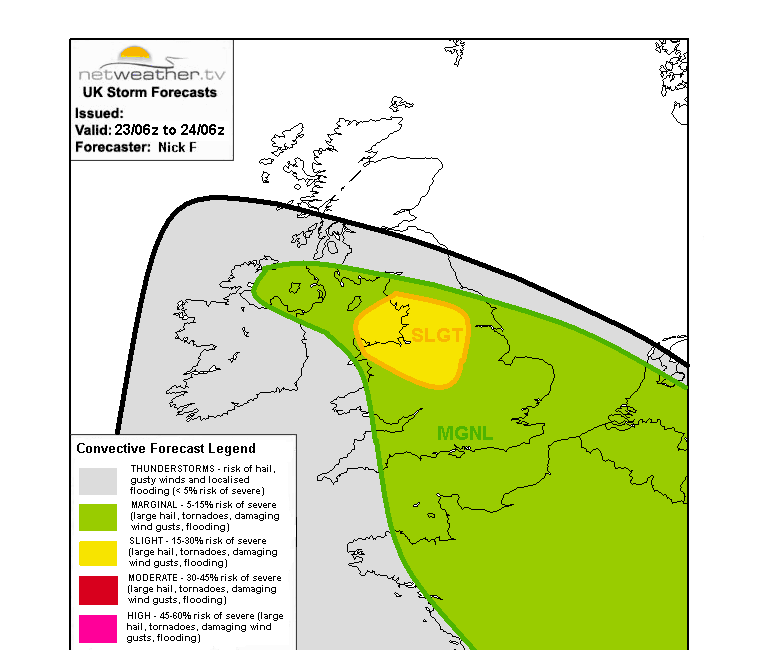 Another factor will be the wind across the northern half of the country from this afternoon onward, blowing in from the east as the low bringing the rain moves up the Irish sea and eventually out to the northwest of Ireland later - gusts of 50mph plus are likely in exposed spots and with it being from a less than usual direction (often the strongest winds are from a more westerly direction), watch out for some possible tree damage.

Through the evening and overnight, the rain and storms carry on north - tending to break up as it moves up through Scotland during the early hours, but still with some heavier bursts in there, and all this will take all day Monday to clear away to the north.

Meanwhile, overnight and into Monday, the next low pressure will be moving up closeby to southern England, bringing yet more heavy, potentially thundery rain up into southern and potential central England and Wales. There's some uncertainty over the northern extent of the rain at this point, so it may stay further south with just southern counties and later East Anglia seeing the wettest weather. Winds will also be gusty close to southern coasts, and will still be strong in the far north too. Between the wettest zones in the south and north, not a bad day with some breaks in the cloud coming through and just a few showers likely. Temperatures cooler than of late everywhere though reaching the mid-high teens.

Tuesday sees low pressure number three on the scene (we'll have a look at all these lows in more detail below), so more rain and wind making a move up from the southwest during the day, with more to follow on Wednesday. Thursday and Friday are then set to bring some sunnier spells but plenty of blustery showers.

A tale of three lows

It's all about three low pressure system this week, they all play their part individually from today onward, then later in the week 3 become 1 to keep us in the unsettled flow. 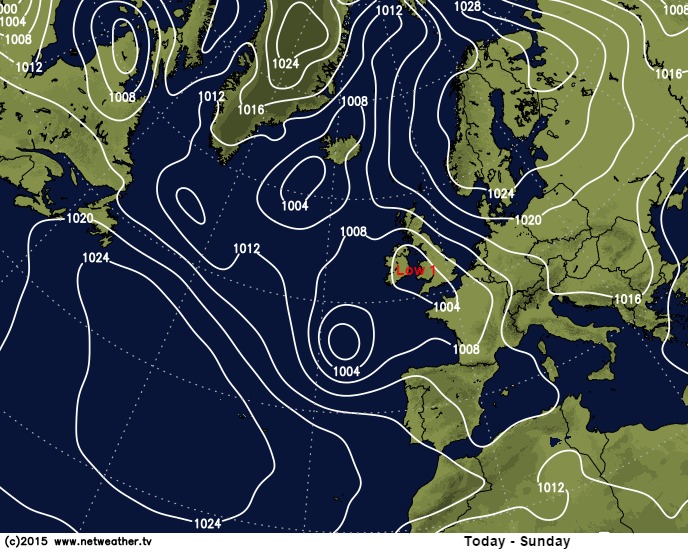 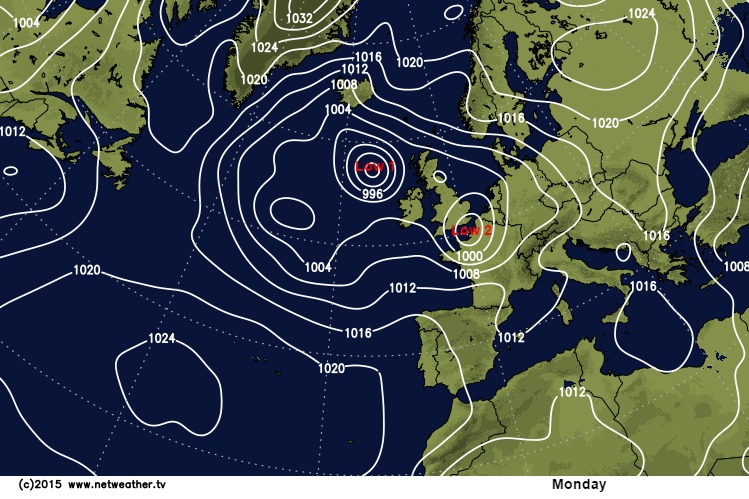 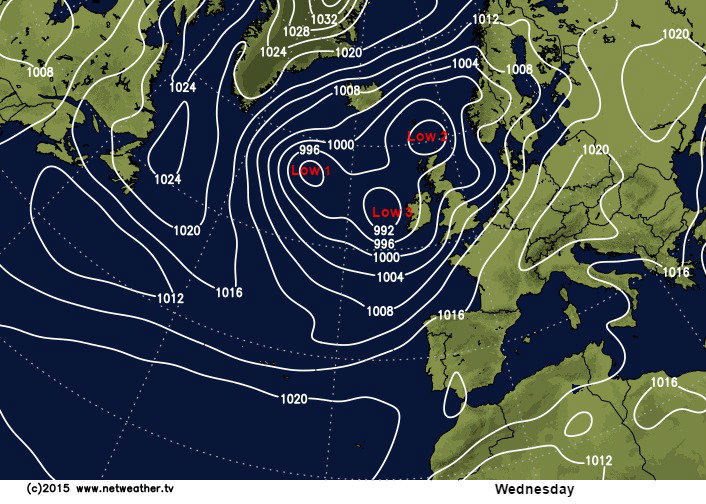 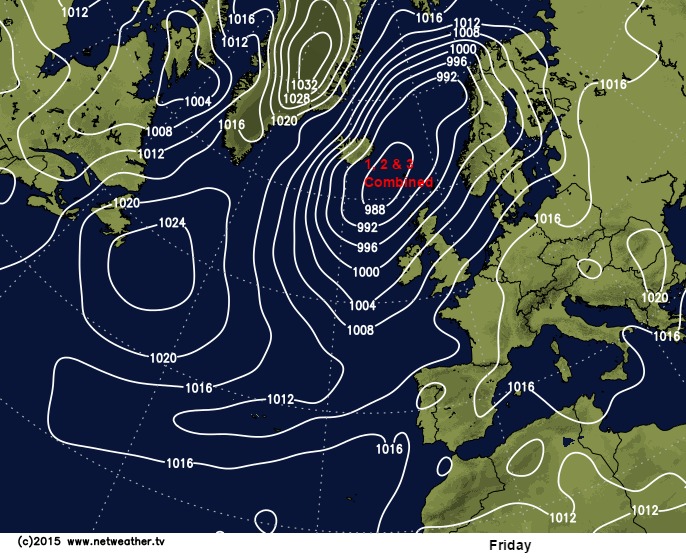