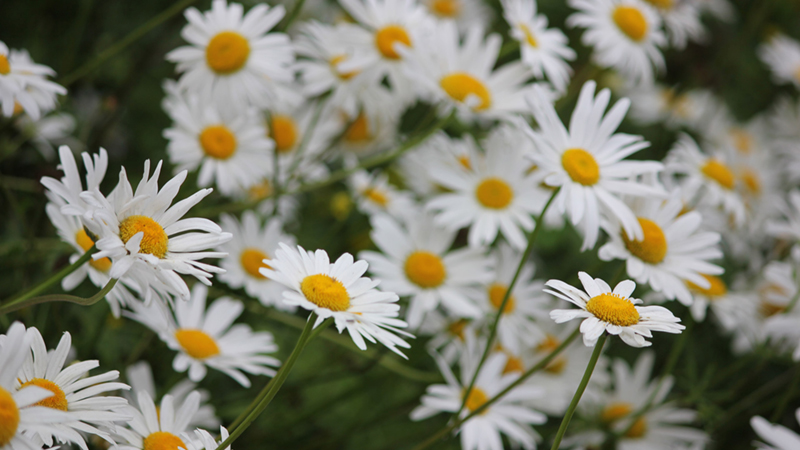 I’m still sneezing and it is cool, breezy, overcast and about to rain. Pollen levels are forecast to be low this weekend. Temperatures will be down, there’ll be showers and a fair amount of cloud. Also we are in-between seasons. Tree Pollen started back in spring and is coming to an end now, with the Oak pollen last to surround us. The grass season hasn’t really got going yet, mainly due to the cool May. Many people have not had to cut their lawns too many times so far this year. The rapeseed fields are causing localised sneezing situations, driving down the A1 hasn’t been ideal some days.

So what causes all this sneezing and sore eyes, why are some times of day worse than others and some months. What effects does the weather have on the pollen count and what can I do about my hayfever?

What's in a Pollen grain?

Pollen grains and fungal spores become airborne through the year and float about on the breeze. The grain of pollen contains loads of tiny particles, the allergens.
The human body, clever as it is, has sensitive bits on the inside of your nose and throat and your eyes.

When the pollen grain makes contact with your eye or nose, it encounters moisture which causes the surface of the pollen grain to break and the nasty allergens leak out. Your body then may react by sneezing to push out the irritant, making your eyes water to flush it out, or you can cough to clear your throat. Your nose runs to clear the pollen, you rub your eyes and spread the particles around more so your eyes go red, and some people reach so badly it triggers an asthma attack. This is Hayfever.

How does the weather influence the pollen count?

Pollen count charts show predicted amounts of which ever pollen is currently in season and that varies through the year. Low, Medium, High, dreaded Very High. Some people are affected with low levels and maybe just by the pollen of a specific tree early in the season. 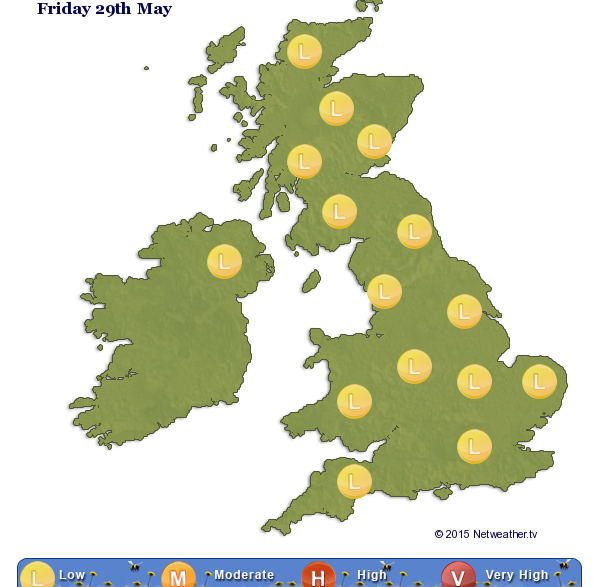 Within the grass pollen season, levels are often highest on a sunny, breezy summer’s evening. These pollen grains rely on the wind to blow them about to pollinate. The dry grains are carried about and might encounter your nose or eyes instead of their pollination destination. Sometimes it rains on the grains. You may have heard people discussing how the rain can wash all the pollen out of the air and this does happen. However, just as the moisture in your eye releases the tiny particles, the rain drops can do the same. So after a late downpour with some late sun the pollen count can leap up again, everyone’s itchy and in severe downpours like a thunderstorm the results can trigger asthma attacks.

Any breezy days will blow pollen about; still calm conditions allow it to settle. Warm sunshine will encourage the plants and grasses to get going which is why the main hay fever season is in summer.

On a typical dry, warm and sunny day the main peak is in the first half of the morning and then again from late afternoon well into the evening. The discomfort can continue all night on a warm summers night, exactly the kind of night you want to leave the windows open.

Is it just the fault of Hay or dried grass?

Sometimes the allergic reaction isn't due to grass pollen. Pollen count forecasts now include the tree pollen season, which is earlier in the year and just ending now. Also weed pollen which later but fungal spores often cause sneezing, runny nose, mucous, coughing, congestion, sinusitis and wheezing. There can be confusion as to what a specific person is actually reacting to and different weather conditions can affect a season.

Different fungi release their spores at different times of the year, like mushrooms and toadstools. Harvest time throws huge amounts of fungal spores up into the air. I lived next to a barley field and Boy did that make me cry. Some prefer warm, dry weather to be blown about easily by the wind. Others need some moisture along with a certain temperature to get going, and that can occur with summer night-time humidity or dew. Rainfall can also be the moisture input that sets off a release. If it is too windy the spores are dispersed greatly and their effect is reduced. Generally, the spore season starts in late spring and runs into autumn with frost bringing a halt to production.

The tree pollen season is highest around March, April and May but just as some fungal spores lurk about at quieter times of the year, early flowering trees like hazel and alder can produce pollen in January or February. The main trees are birch and oak, with the oak season just coming to a close now

Weed pollen peaks July August time with Nettle, Dock and Mugwort causing the main problems in the UK. Tabloid papers have delighted in screeching this week about the rampant Ragweed plant which is coming to the UK from the States reeking Hay fever havoc with its bionic pollen output. Ragweed is the worst hay fever plant in the world. It only grows in the UK when introduced accidently by birdseed and as an annual plant, dies off in the cold of winter. Current climate conditions in the UK do not support the potential of Ragweed to seed and flourish. 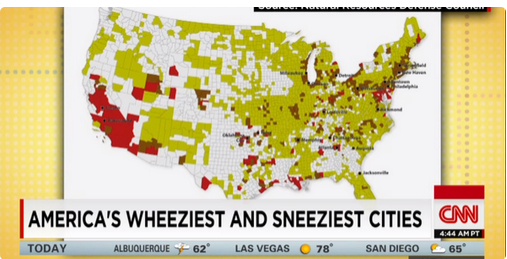 Where does Rapeseed fit in?

The lovely yellow fields that patchwork the UK countryside at this time of year, may look nice but can also set off one big allergic reaction. You need to be quite near to the fields, as the pollination isn’t windblown, but done by insects for this plant. As the Oilseed rape pollen doesn’t need to travel by wind, it tends to fall close by. The grains are sticky and so group together which hinders their range. It is unclear if it is the rapeseed pollen causing the problems or some of the organic compounds from the plant which acts as allergens. So it doesn’t get included in the pollen count but if you are near a flowering field, or dare to walk by one then it does set off conjunctivitis, rhinitis and asthma attacks. The effects ease as the flowers disappear but harvest time sees a return of the symptoms locally.

What if you did want to escape the pollen? A beach with an onshore wind would help, but sea breezes pickup during the day and fade by evening. Away from the fields and trees, wearing a space helmet, in reality sunglasses do help. If you do use a spray for your hay fever it maybe worth starting that now, as the end of this week is forecast to have low levels but June looks like getting warmer from the south and you'd expect the grass season to pick up anyway at this time of year. Spray remedies recommend you start a week before the pollen hits.
Honey is always suggested, mainly for its natural goodness. Whether a teaspoon of local honey each day truly wards off the effects of hay fever, seems unknown, but could be worth a try.

Herbs such as nettle can provoke a natural antihistamine reaction in the body. Camomile, elderflower and eyebright all have soothing and calming effects. Antihistamines, eye drops, closing the windows in the evening, trying very hard not to rub your eyes are all suggestions. However, many of us will, at some point, be puffy faced with bright red eyes searching desperately for more tissues, declaring "I hate summer!"