Cloudy Bank Holiday, as cool May plods on

Bank holiday Monday is rather cloudy and grey with some patchy rain, but considering the UK has known wet, windy and cold long weekends, we’re not doing too badly.

At the moment, the UK is at the edge of a large area of high pressure in the Atlantic. There will be some warm sunshine (out of the breeze and away from the shade) in the next few days. We keep a westerly flow all week but gradually a low pressure away to the north begins to have more influence. It becomes more unsettled with showers appearing from the NW and cooler air takes hold once more.

Wales will have a mild, cloudy start. Most parts will be dry but at times it will feel a bit damp with the thicker cloud in the north and west. There will be a few breaks allowing brighter spells in a NW wind, which will be v.light for southern Wales. 13 to 17C

To start the day there are some clusters of showery rain over eastern and southern England.  These lines continue eastwards, the Norfolk bit into the North Sea and the Hampshire area clearing Sussex into the Channel. Then England will have a lot of cloud through Bank Holiday although should be mostly dry. There will be breaks in the cloud this morning for southern England allowing sunny spells but these come and go during the day. There will be a light NW wind, moderate for western areas and light for south and east coasts. 13 to 17C

N.Ireland will have a cloudy, grey morning with a little light and patchy rain. It becomes drier as the cloud lifts this afternoon although with more of a NW breeze later on. 10C north coast, 14C in south

Much of Scotland is cloud and grey today with some showers moving eastwards over northern parts. These clear NE Scotland but continue to feed into NW Highlands and the Islands. Breaks will appear in the cloud in a moderate NW wind so brighter spells in the east up to 15C, west only 10C. 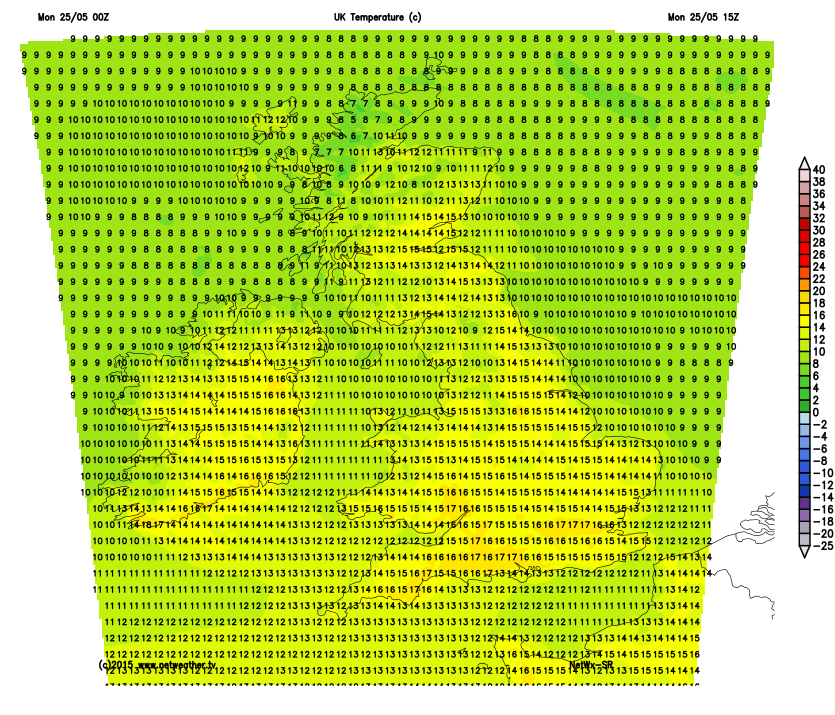 Damp weather continues to affect northern and west Scotland on Tuesday but elsewhere should be dry with bright spells coming through the cloud. With a bit more sunshine temperatures will reach 19 or 20C in SE Britain, 17C in SE Wales. Still only 12 to 14C for N.Ireland and Scotland with more of a NW wind.

Wednesday starts off fine but a pulse of wet and windy weather heads towards Ireland, bringing rain and freshening SW winds to N.Ireland and Scotland, later into Wales and NW England. The low pressure responsible clears off towards Norway and the UK then sits in the cooler showery flow to end the week.

If you’ve got today off, enjoy!