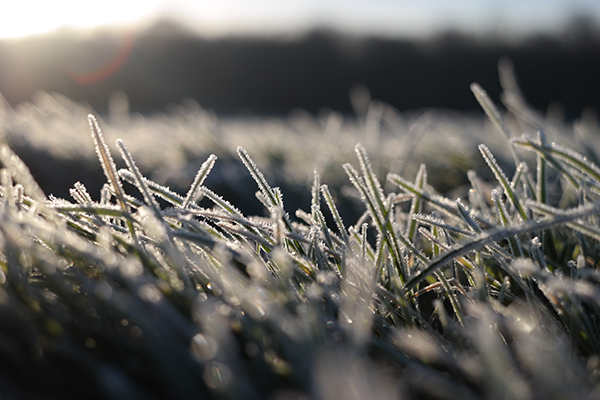 It's a chilly start to Monday, especially across the north and west, with some unusually low overnight temperatures for late April having been recorded, falling as low as -8C in Katesbridge in Northern Ireland and and -6C in Sennybridge in Wales. Even on the south coast, Bournemouth was close to freezing.

Swirl of showers, wintry for higher ground in the north

The general theme this week is for chilly and unsettled conditions, with sunny spells and showers and a risk of overnight frost where skies clear. It is mostly dry and clear with prolonged sunshine so far this morning. However, we do have a swirl of heavy showers around an area of low pressure moving in across Ireland, with these showers spreading east across Northern Ireland, Scotland, NW England, north and west Wales later this morning and through the afternoon, showers falling as snow over higher ground in the north. It will also become windy across the northwest as the low arrives, with winds gusting to 40-50mph. But for the bulk of England and east Wales, it will be a mostly fine and dry day with plenty of sunshine, though we could see a few scattered showers develop and move east across central and southern England later. A chilly day, temperatures reaching 14C in London, 10C in Cardiff, 9C in Manchester, Belfast and Glasgow.

Then a breezy but chilly Monday night, with frequent showers across Scotland, Northern Ireland and northern England, where they will fall as snow over higher ground and occasionally to lower levels too. Well-scattered showers further south, but if you catch one, it could be heavy. Not quite as cold as last night, temperatures generally staying above freezing, though some rural spots in the north will see a frost. 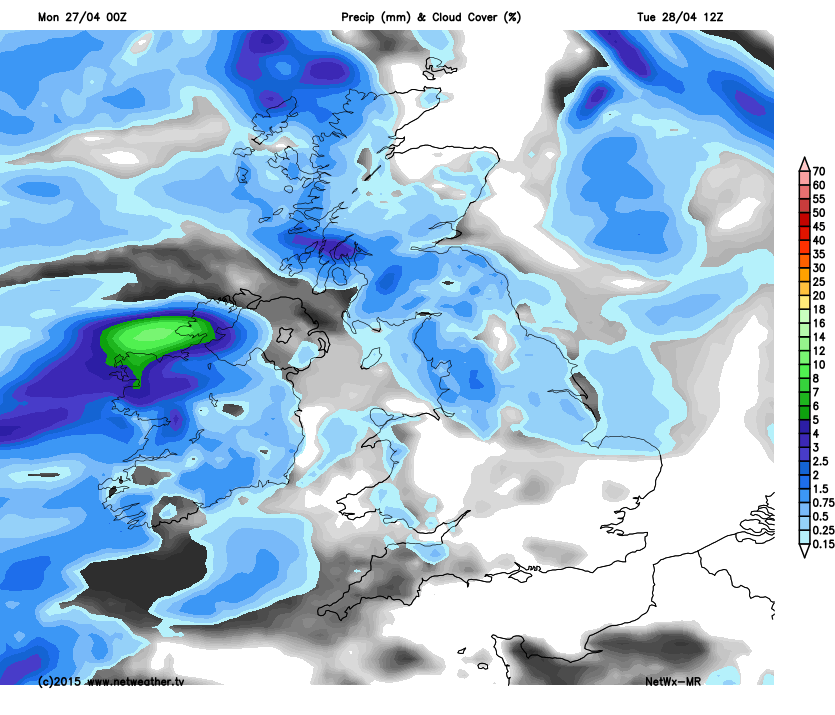 Another day of sunshine and showers across northern and western areas on Tuesday, heavy and frequent across Scotland and Northern Ireland and still falling as snow across higher ground here. Drier and sunnier with only isolated showers across central, southern and eastern England. Temperatures reaching 11-14C in the south, 8-10C in the north, a breezy day too.

Some uncertainty over detail by Wednesday, as we see a complex low pressure system over northern Britain and an active cold front moving east, but it looks like most areas at some point will see a band of heavy rain and strong winds, with snow over northern hills, spread southeast across the UK followed by sunshine and showers. Feeling cold, temperatures below average with 9-11C the highs.

Sunny spells and showers again on Thursday and feeling chilly still. Friday hopefully a drier and more settled day, as high pressure builds, though still a risk of the odd shower developing in places.Some uncertainty for the early May Bank Holiday Weekend, it looks turn increasingly unsettled again from the southwest, with rain or showers spreading north, the question mark is over how far north the unsettled conditions spread.