Ex-Hurricane Bertha's Visit To The UK On Sunday

Still the models disagree less than 48 hours away from when the centre of the depression formed from ex-Bertha makes landfall somewhere across the west of mainland UK on Sunday morning.

12z GFS takes the centre of the low up through the Irish Sea on Sunday morning and makes landfall across Cumbria around lunchtime before exiting over SE Scotland into the North Sea, the centre on land crossing circa 985mb, so fairly deep for the time of year. It shows wind gusts of 40-60mph over coasts and hills of SW England, Wales and northern England - perhaps more on the lee side of the Pennines and mountains of N Wales, plus funnel effect of valleys. 30-40mph gusts further south and east. Rainfall totals of 50mm+ across southern Ireland, 20-30mm max across Wales and N England.

ECMWF, on the other hand, takes the low centre, a shallower feature, NE across S England, exiting The Wash into the N Sea around 995mb. Winds and rainfall totals less, but still appreciable to make Sunday a windy wash out across much of England and Wales. Met Office T+48 fax chart for noon Sunday is in between ECM and GFS tracks but closer to the ECM depth with 996mb, so perhaps this maybe the best compromise for the likely track for now.

GFS indicates a convective element to this storm system, with instability and strong wind shear in the warm sector just ahead of the cold front sweeping east - so there is a risk of organised embedded storms, perhaps supercells, which could produce their own severe weather in the form of strong convective gusts, large hail and even a tornado or two ... I will look into this scenario in a storm forecast to be issued nearer the time.

The models are still struggling to come to a consensus with their 12z output today over the track of Ex Bertha. 12z GFS still continues to take the depression over to the cold side of the strong Atlantic westerly jet stream just west of the UK and under the developmental left exit region, allowing a rapid deepening into an intense depression, tracking NE through the Irish Sea and over southern Scotland, bringing exceptionally strong winds for the time of year, along with heavy rain across many areas. 12z ECMWF and HIRLAM take the depression further south, without engagement on the cold side of the jet, rather the low runs harmlessly east over northern France, making it a non-event on Sunday, bar some heavy rain or showers moving across S England and E Anglia.

The updated T+72 Met Office fax chart for noon Sunday agrees with the ECMWF and Hirlam track across northern France. Though quite a few of the 50 odd ECMWF ensemble members (EPS) are going for a much deeper depression a little further north across the UK, suggesting the possibility of engagment as per GFS, so we're not out the woods yet.

The T+00 Met Office fax chart for 6am Thursday 7th August shows Bertha has now become associated with a frontal system south of New Foundland and has acquired ex-tropical characteristics. The centre of the low appears to be on the cold side of the frontal zone now and on the forward side of an upper trough extending south from Quebec down towards the Carolinas. The ex-tropical low is also under an upper-level westerly jet stream. The low pressure system will continue its track NE at 20knts, before tracking more eastward later today, as the steering flow and jet stream above it becomes more westerly along the base of a large upper (long-wave) trough extending south from Greenland across the Atlantic.

Now Bertha doesn't deepen a great deal on the model guidance over the next 48 hrs as it crosses east over the Atlantic under an unusually low latitude zonal jet stream, but a shortwave trough in the strong upper westerlies coming out of NE Canada over the weekend looks to 'sharpen' as catches up with the low by then in the southwest approaches later on Saturday. However, the models have been struggling with how the shortwave trough 'engages' with the low pressure system as it approaches UK waters and whether the low falls under the cold side of the jet and in developmental 'left exit' region of the jet where maximum upper divergence takes place. These factors will have an impact on whether the low deepens quickly to our SW and moves NE across Ireland then northern UK on Sunday, as per 00z GFS model output, which would bring a spell of very wet and windy weather to Ireland, England, Wales and S Scotland - with gales around coasts and hills. Or, the low doesn't interact so favourably with the shortwave and jet streak in the southwest approaches as per 00z ECMWF model, thus not deepening and rather continuing on a more southerly track northeast as a shallower open wave through the English Channel and across far north of France, before deepening later on.

The updated t+84 fax this morning from the Met Office, drawn by the Duty Forecaster using a combination of model 'raw' output and their ensembles, agrees more with the track of 00z ECM, though the low a tad further north across SE England, with centre of 995mb at noon Sunday in London area. 00z GFS, on the other hand, has low centre at noon Sunday over southern Scotland around 985mb! So you can see the uncertainties for now. Whatever the track, large scale ascent of very warm and moist sub-tropical air getting drawn into the low's circulation from the southwest and strong baroclinic zone created between this air and cold air sinking south from Greenland area - is indicated to produce large rainfall totals from some of the models, perhaps 20-30mm widely according to GFS and NMM over northern and western areas, 40mm+ according to NMM over S/E EIRE and Irish Sea, similarly large totals further south if the low tracks further south.

All in all, a risk of some unseasonably wet and windy weather during the second half of the weekend. I will endeavor to bring updates on these thoughts over the next few days. 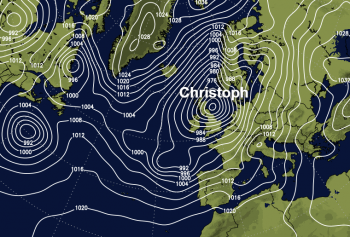