Light winds overnight have allowed temperatures to fall to 1 or 2C, so there will be ice to watch out for. There are touches of frost and fog patches for E.Anglia, SE England and the E.Midlands.  Elsewhere, the winds are freshening from the west; Wales and the SW are milder at 8C. Frontal rain is moving across Britain this morning, over eastern Scotland and the spine of England. There are lots of hefty showers following this rain band and colder air. So there will be brief, brighter lulls but more wet weather to come, especially for northern parts.  The noticeable wind will make it feel cold today. By midday, the rain will be crossing London and E.Anglia with some drier and brighter weather for Wales and much of southern England, the Midlands and NE England. Temperatures here will be 7 to 9C but feeling colder in the wind. The heaviest showers do ease for N.Ireland through the day. The sharp showers late morning could be wintry but with brighter skies in the afternoon temperatures should reach 6C with a fresh Westerly. Showers continue for N.Wales, NW England and Scotland (4C) into the afternoon, with sleet, hail, thunder, snow for the NW Highlands (perhaps 5-10cm). They do ease by the evening but that is only as the next band of rain approaches the west.

The winds fall light quickly this evening with clearing skies. Temperatures fall down to -1C in NE Scotland and +1C central and eastern England, so ice and frost in places. N.Ireland has a period of wet weather as the next band of frontal rain (on a warm front) moves in. That rain moves over Wales and SW England during the night.

By dawn on Friday, the winds will have picked up for N.Ireland and SW Britain, with a strong southerly through the Irish Sea and the North Channel.  As the rain band makes its progress over Britain it comes up against today’s cold air. Sleet and wet snow are forecast at the front edge of this band but then back to rain later. So a cold, miserable start on Friday for central Britain, western areas will also be wet and windy. There will be further heavy rain for Wales and the SW. E.Anglia and Lincs. could have some sunny spells early on, with a chilly start but the cloud increases with rain by teatime. Northern Britain keeps the fresh to strong southerly as the wind veers westerly for the West Country in the afternoon. Shetland could see severe southerly gales later on Friday, with gusts up to 80mph, There will also be very heavy rain over Orkney later Friday afternoon

It stays breezy in the north during Friday night with temperatures around 5C, 2C for northern Scotland. The wet weather will slowly clear off into the North Sea.

Becoming windy everywhere during Saturday morning, with a fresh to strong westerly wind. There will be long drier brighter spells but interrupted by a band of heavy showers moving from NW UK to Wales and southern Britain later. The showers continue in the far NW but elsewhere there is a lull, quieter, drier and cold for Saturday night. That doesn’t last as a deeper low pressure approaches from the Atlantic

Sunday will be very windy with stormy weather clipping NW Britain and the Northern Isles once more. Heavy rain for most parts with snow for a time for the Grampians.

For next week, if this low drifts towards SE England, which it seems to on the forecast charts, tortuously slowly, it will drag an easterly off the continent for northern Britain by Tues, eastern England by midweek. Long way off but that could be a brief cold snap and some snow (for the east!) 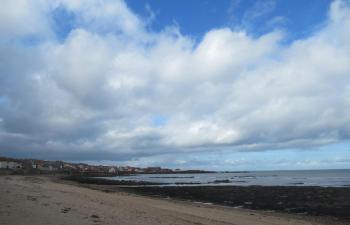