Netweather
Latest - Week ahead: Fine with early fog in the south. Very windy for Scotland

Finally milder by day for the frozen south this weekend. There will be a lot of dry, cloudy weather with the wind picking up on Sunday, gales in the far north.

Two cold fronts work their way down through the UK this week. However, it doesn’t mean that southern Britain is going to get colder. It’s just that change of air is on its way. One front, on Wednesday, is already spreading patchy rain southwards and heralds a shift in the wind direction. The other falters and fades on Saturday. For most it will just bring more cloud. Both flow around the top of a large Atlantic high pressure which is steadying the UK weather. 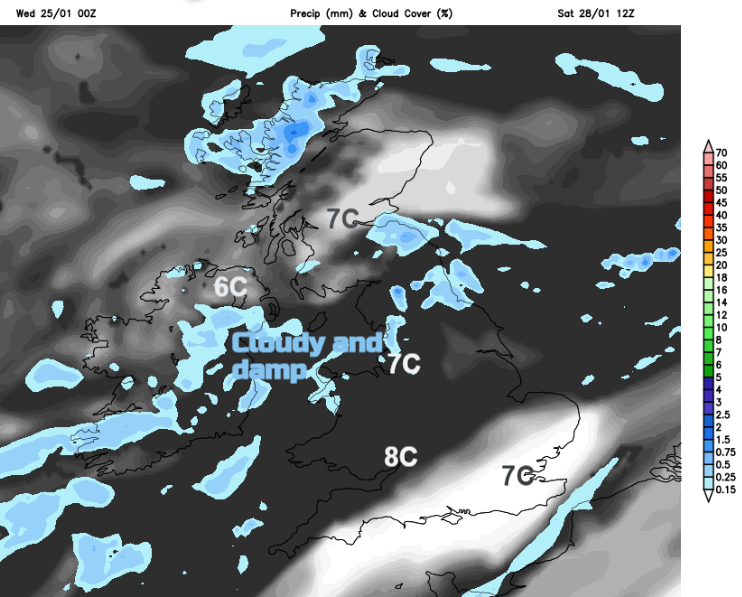 More usual temperatures for the UK in late January

The midweek cold front will just return our topsy-turvy weather back to normal. To start the week southern England has been seeing frosty nights and recording the lowest UK temperatures by day and night, as northeast Scotland saw nearly 16C by day. This mildness was due to lee effects over the Grampians in a strong SW wind. The southern lingering chill was due to cold air from the continent hanging around from last week. Also, there has hardly been any breeze to stir up the atmosphere and dense fog formed as a slice of clear skies allowed temperatures to fall overnight, down to -8 or -9C in places. It won’t be as cold and frosty, nor foggy by the weekend. 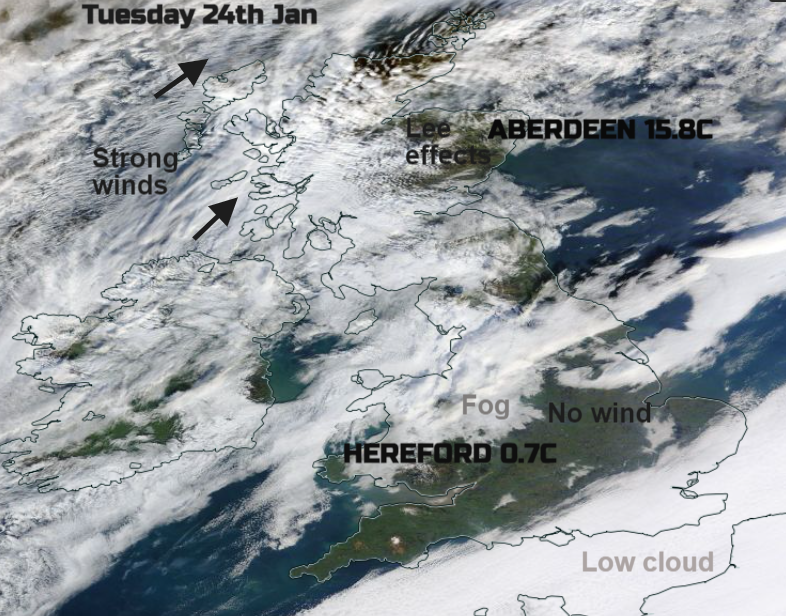 The midweek cold front disrupts the stagnating cold pool and leaves the UK in a northerly flow. However, this air has taken a long, maritime journey around the high pressure, it’s not from the Arctic. It’s a similar story at the weekend. 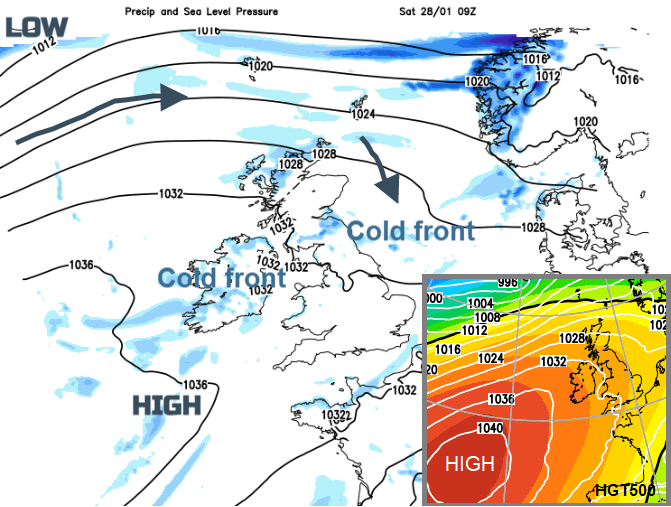 A frontal band with more cloud and patchy rain peters out on its journey southwards on Saturday. However, with a strong jet core to the north of the UK, deep low centres will skirt by. This will bring very windy weather for the far north of Scotland on Sunday with gales likely. Also, gusty winds over the high ground of northern Britain as southern Britain just sees a light westerly breeze. 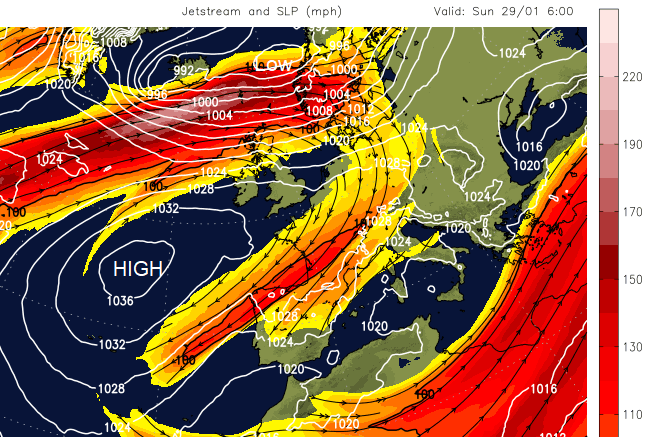 Jetstream forced away to the north around the dominant High

Friday evening looks dry for much of the UK. It will just be the Scottish Islands and far NW of Scotland that will see the frontal rain arriving with low cloud, a mild SW breeze which will veer to the northwest after the rain. For much of the UK, it will be dry with light winds and nippy. The temperatures will hover around zero or just above.

There is some uncertainty over southern and eastern England about a frosty start on Saturday, which isn't ideal for football and rugby pitches. Breaks in the cloud cover are showing on the forecast models and it will make quite a difference. Lingering cloud means +3C as a minimum whereas clear spells would result in -2C and more frost.

The weak frontal band will be moving from southern Scotland and Northern Ireland down over northern England and north Wales on Saturday morning with more cloud and light rain. It looks like there will be a lot of cloud about but there could still be some bright or even sunny breaks. Temperatures would then rise from 6C to 9C. 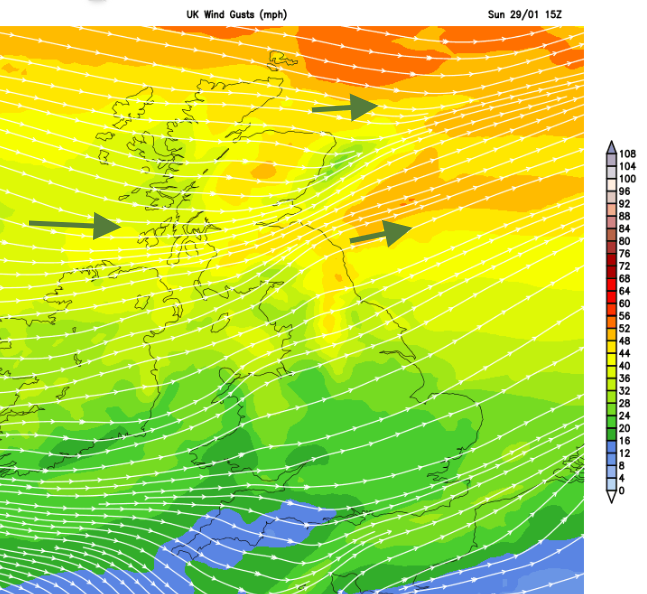 Overnight it looks like NE Britain is the area most likely to see a frost with breaks in the cloud cover.  The even weaker cold front will be over southern England on Sunday, with thicker cloud and perhaps dampness around the coasts of SW England. The strengthening winds, and gales in the far north, will bring cloud and rain to western & NW Scotland but should allow breaks to appear to the lee of high ground. NE England and eastern Scotland could see sunshine for a time and that would lift the temperatures into double figures. Sunday should feel quite mild anyway. 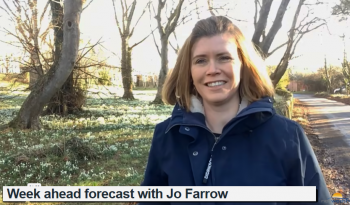 Week ahead: Fine with early fog in the south. Very windy for Scotland 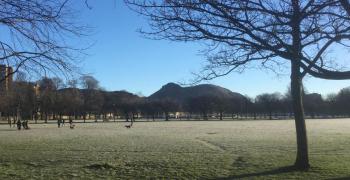 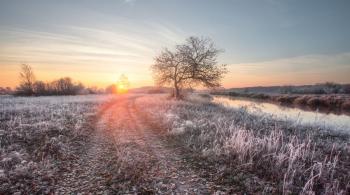 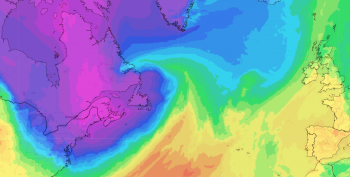