Storm names for 2022 2023 announced including Betty, Glen, Mark and Priya

A new list of storm names has been announced from the UK Met Office, Irish Met Eireann and the Netherlands KNMI. The list includes Daisy, Johanna, Khalid and Owain for impactful low pressures 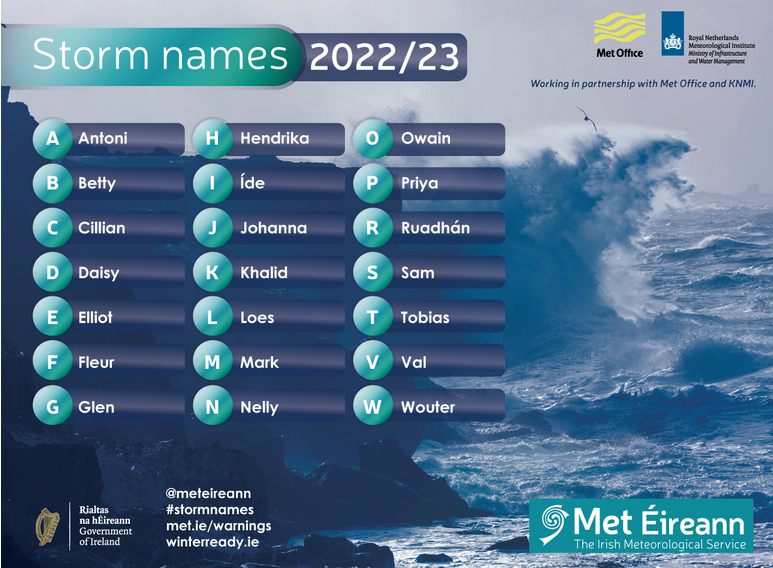 The storm names for the 2022/23 season have been announced by the UK Met Office, Met Éireann and KNMI (Netherlands).  Names have been chosen by each of the three meteorological services to populate the list with some input from the general public. Antoni, Betty and Cillian will be the first named storms for the group this year. 'Betty' was the winner of a public vote on MetOffice Twitter. KNMI’s names include Antoni, Hendrika, Johanna and Loes relating to influential Dutch scientists.

A storm is named when low pressure is forecast to cause medium or high impacts in one or more of the three countries. Usually, this relates to strong winds but it could be due to impacts from rain or snow. 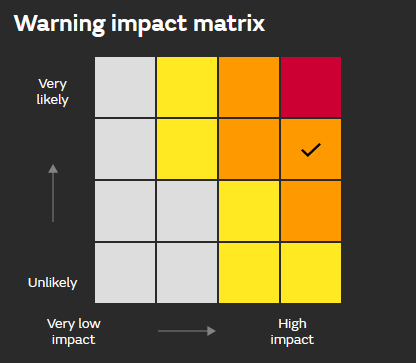 The Met Office warning system uses a matrix with Impacts and likelihood. If a situation develops that could see a yellow warning moving up to Amber/Orange, even red, there will be discussions between the Met. Services about using a name to provide consistent messaging. Hopefully, the naming and next warnings will be issued in time for broadcasters and the public to take in the information and adjust their plans

Head of Forecasting at KNMI, Jan Rozema said: “Chances are very high that severe storms will affect all three countries involved: Ireland, the UK and The Netherlands. News on severe weather is not limited to national boundaries, so the message to UK, Irish and Dutch inhabitants will be much appreciated and understood if we share the same information, starting with storm names. “

These three countries are in one storm naming group, West.  Norway, Sweden and Denmark were in Northern Europe group. France, Spain, Portugal, Luxembourg and Belgium are in Southwest Europe group. There is also a Central Europe group, a Central Mediterranean group and Greece, Israel and Cyprus in the East Med. Group. Greece gave the first storm name in that group in October 2021. Discussions are ongoing to keep the first name going across Europe. This gives an advantage to western countries, and especially the Portuguese IPMA who name storms over the Azores, way out in the Atlantic.

Here in the UK, we sometimes see other group's names appear, that don’t fit in with our alphabetic listing. In January Storm Malik affected the UK which had been named by the Danish Met. Service, DMI and was closely followed by Storm Corrie. 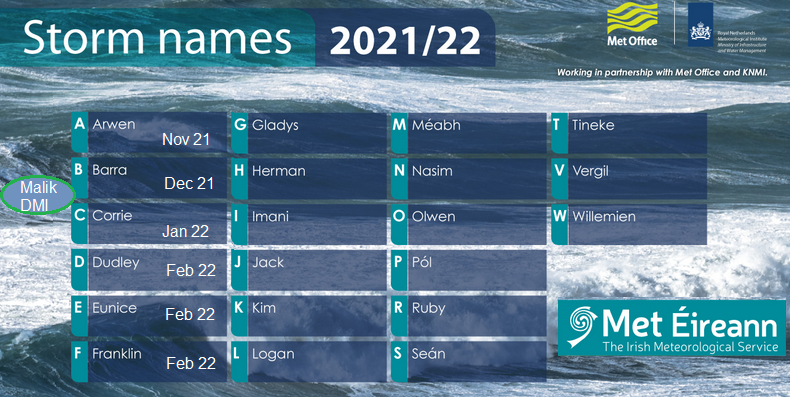 Another complication is if the troublesome low pressure is an ex-hurricane. Remnants of hurricanes can reach across the Atlantic and impact Ireland or the UK. These keep their tropical name. 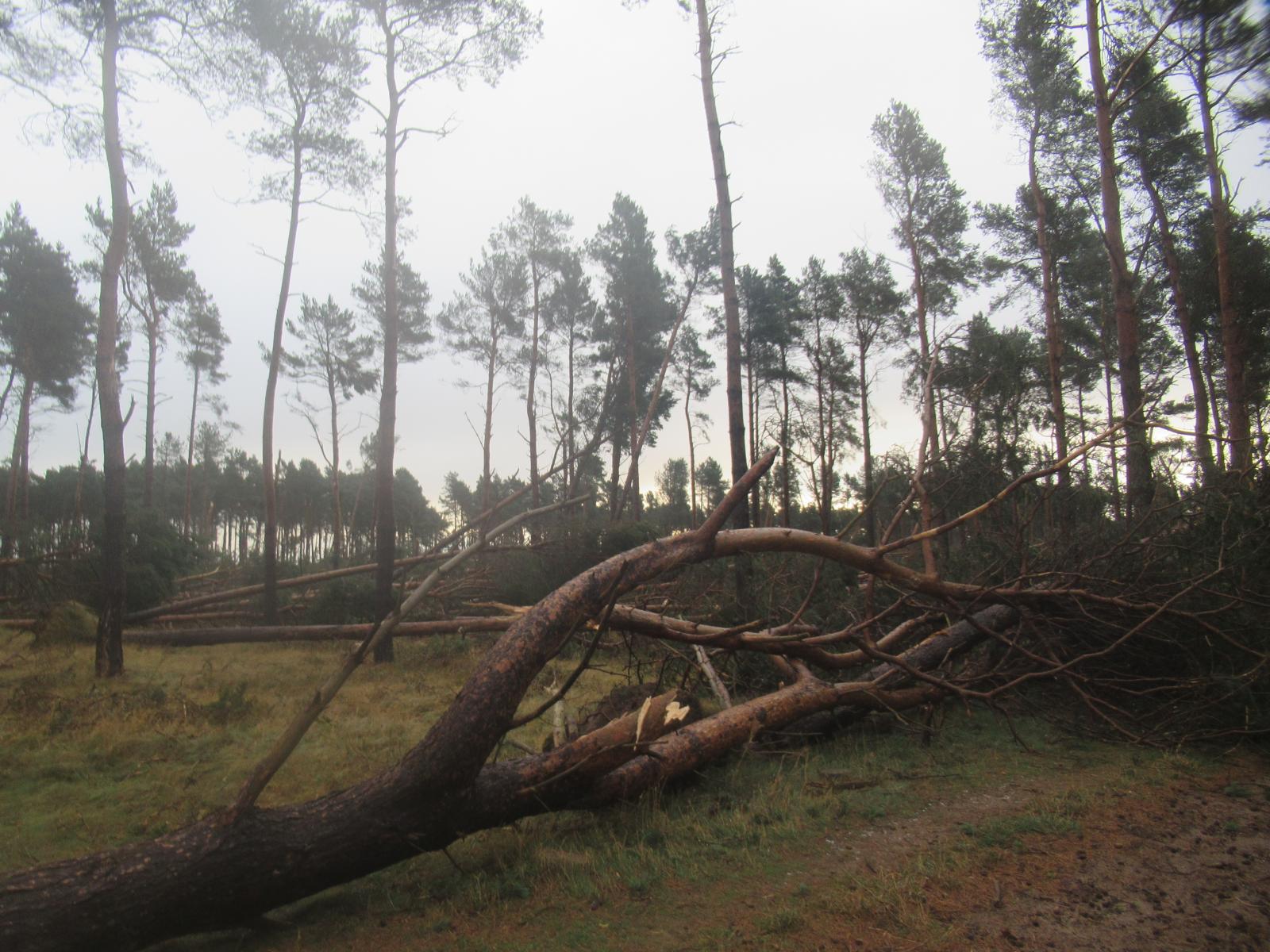 Last November we had Storm Arwen in November with red warning on the 26th. Eastern Scotland and NE England still bare the scars of this unusual wind direction storm. Broken trees remain strewn about with woodlands altered after an event that left some places without power for far too long.

February 2022 gave us a triple whammy with Dudley, Eunice and Franklin in quick succession. Southern Britain will remember Eunice with two red warnings and many places seeing gusts around 70mph, exposed coasts over 80mph.  It was the most severe and damaging storm to affect England and Wales since February 2014. A new gust speed record was set for England with a gust of 106Kt (122mph) at Needles Old Battery, Isle of Wight.

Post-event surveys by the UK Met Office showed that “98% of those within the red warning area in the southeast for Storm Eunice were aware of the warning, and 91% of those took action to protect themselves, their property or business.” 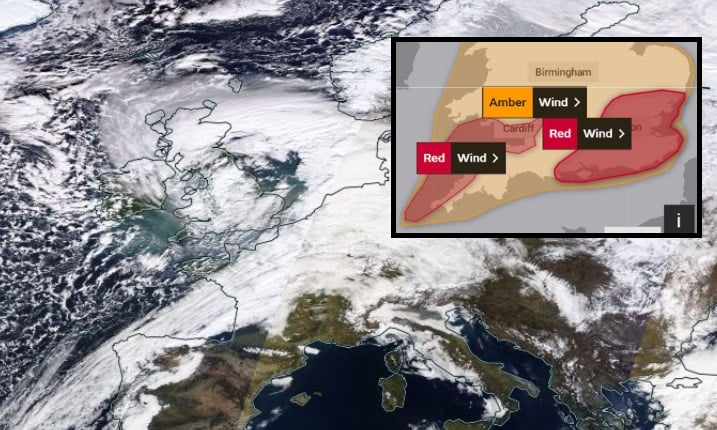 Storms are named because of the forecast impacts. Naming a storm should heighten awareness about upcoming severe weather. It should help communicate and highlight the upcoming event. Also thinking back to these two major storms from last season, it helps frame the whole process. So next time when there is an amber or red warning and forecasters are talking about the Storm path, timings and impacts, hopefully, the public and businesses will use the information to make good decisions.

These storms caused travel and power disruption, flooding, wind damage, school and business closures. These events don’t happen that often but the three-in-a-week in February 22 was thanks to a powerful Jetstream high up in the atmosphere barrelling low pressures our way.

We have 21 names on the list. We only got to F last year. The year before it was Storm Evert which would have been followed by Fleur, which now appears on this season’s list. So it is nice to see an unused name being reallocated this season along with Tobias. We have seen names used up to Hannah and Hector and on the first year this started (2015/16), we reached Storm Katie but everyone was probably keen as mustard then.

If your name is on the list but mid to end in the alphabet, it is unlikely to be called. It would be nice to see a rolling name list, that just kept going and would then use all the Storm Names like the Central Pacific cyclones list. Sam and Val, don’t get too excited.

Further discussion and chat about the Name our Storms project, now in its 8th year, in the Netweather community forum.