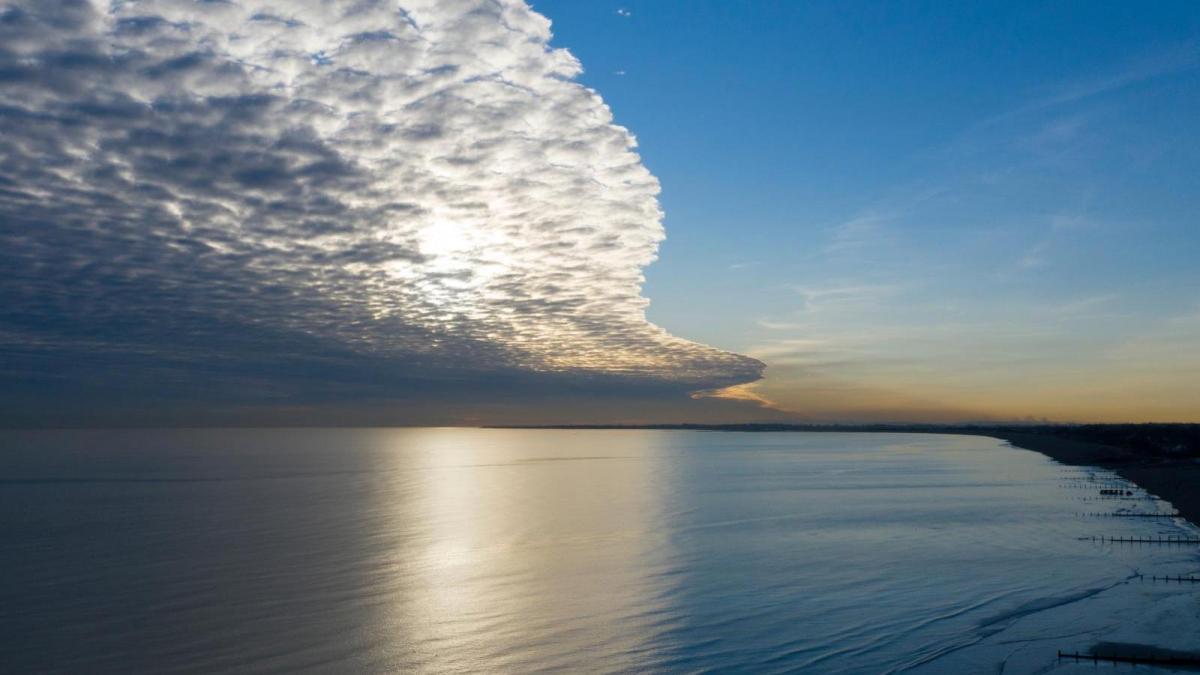 For England and Wales, it's straightforward weather for the next couple of days - warm sunny spells. Head further north into Scotland and Northern Ireland, though, and it's set to stay showery for one more day ahead of a drier Saturday. Beyond that, though, everyone will be back into the showery weather.

The reason for the changes in fortune - high pressure currently centred just to the southwest of the UK will drift north to influence all parts on Saturday before heading even further north to allow low pressure to sneak in from the northeast. That'll move right overhead by Monday and won't go far, right into the middle of next week.

The animation below, from the Met Office global model, shows what's going to happen over the next few days as that high moves north quite speedily, letting that low pressure sneak in the side door and over the country.

At a more local level, the rainfall total maps from the UKV model show the story pretty well. Today, we have showers that'll be heaviest and sharpest over the northern halves of Scotland and Northern Ireland but drier elsewhere. 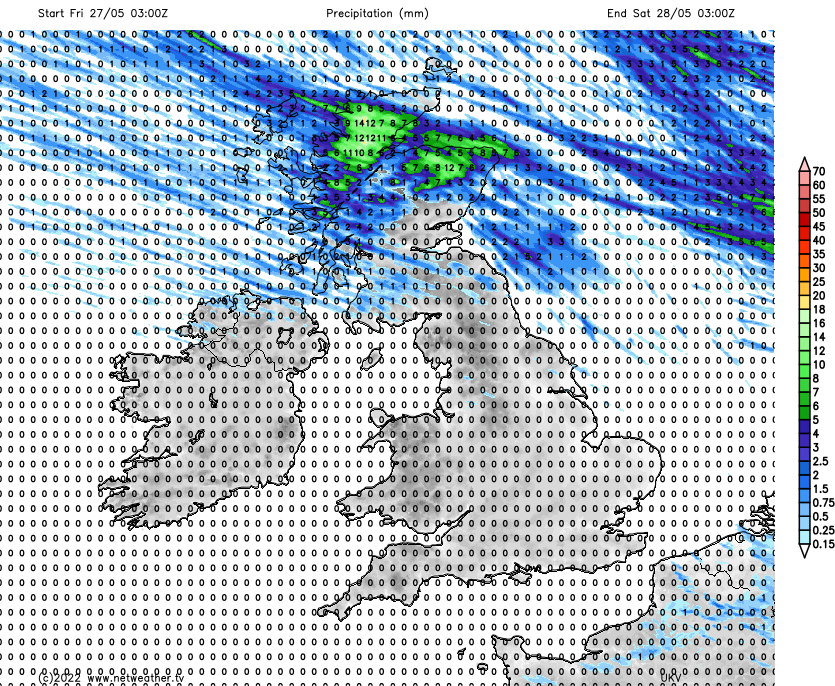 As you may expect, with the best of the sunshine further south, it'll be there where we'll see the warmest temperatures - touching into the low-twenties again in the southeast. It'll be coolest across the north of Scotland, where it'll be a struggle to reach into the teens for some, but at least here, the gusty winds will ease later on in the day.

Most places will be dry by Saturday, with just a few showers perhaps starting to run into the far northeast later in the day. With winds swinging more into the north, it will feel that much cooler near exposed eastern and northern coasts, but inland highs should reach up into the mid or high teens. Not especially warm at this time of year, and not as warm as we've seen at other times this month, but certainly pleasant enough.

By Sunday, those northerly winds will be making their presence felt across the northern half of the UK, making for a much cooler feel - even inland. And even further south, where you may have reached 19c on Saturday, 15-17c is likely to be the max. With the cooler air, there'll also be a decent rash of showers. With the majority in the east, not all will catch one, but nowhere is likely to be entirely immune. 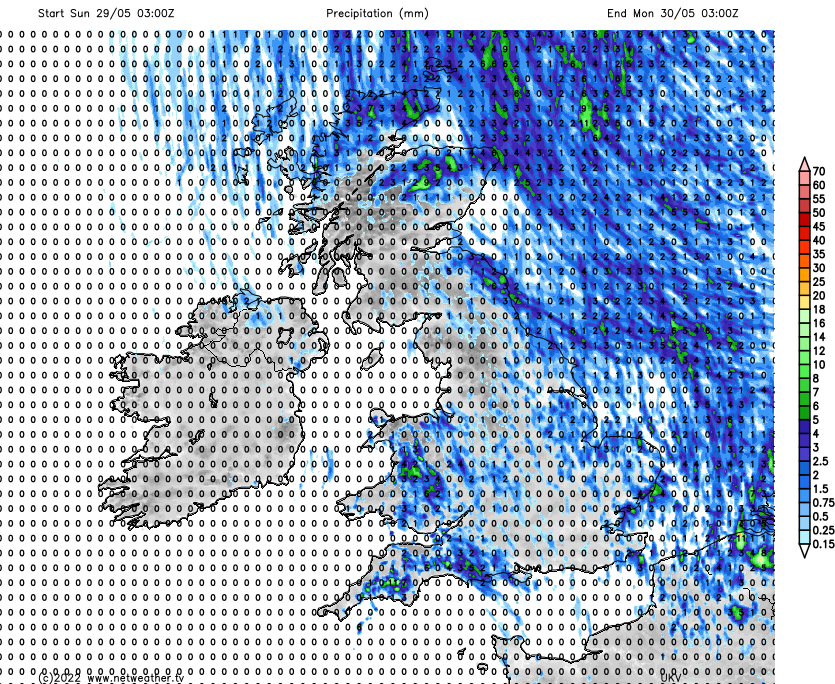 Into the start of next week, with low pressure overhead, the showers will become more widespread and frequent, so you'll be doing well to stay dry on Monday. It'll be cool again too, with highs peaking in the mid-teens in the south, 9-13c elsewhere. 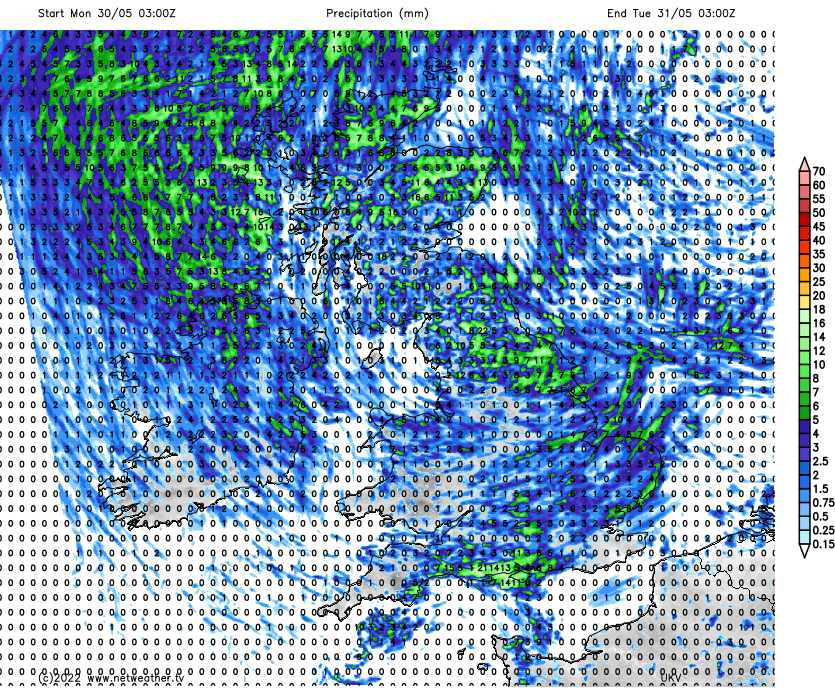 Not too much changes into Tuesday, but by Wednesday, as the low weakens, the showers may become fewer and further between. At that point, though, we may have to keep an eye on another low trying to move up from the south. Of course, there is a long weekend coming up; the signals are mixed for that currently.