An unsettled spell of weather on the way

We have a ridge of high pressure over the south of Britain today, which will give many of us a quiet day, but with a fair amount of cloud for most of the country. The weather is set to briefly turn unsettled early next week, but it looks highly likely that high pressure will take over again towards next weekend.

Today, some outbreaks of light rain and drizzle will spread eastwards through Scotland and Northern Ireland, where most places will be cloudy, but some sunny spells are expected in sheltered eastern parts of Scotland. There will also be some breaks in the cloud and some sunshine in central, eastern and southern parts of England and in South Wales. Apart from some light rain or drizzle here and there in central England and Wales, it will be a dry day south of the border.

High or moderate pollen counts across a large part of the UK this weekend. 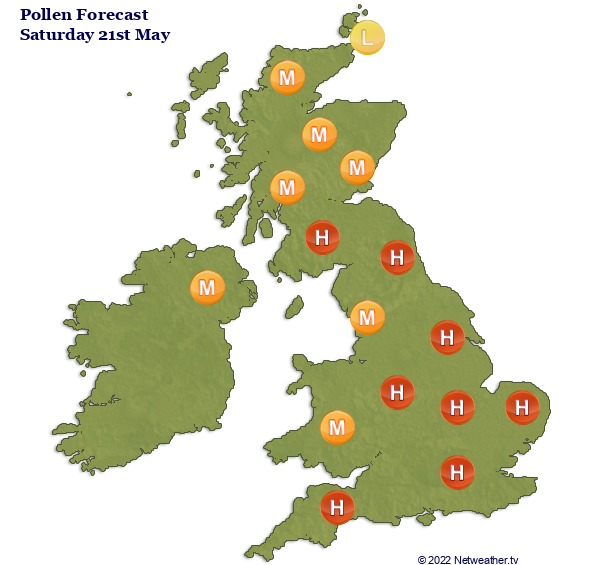 It will be quite warm over most of England, with temperatures reaching 20 or 21C around London, and around 17 to 19C in most other places. Eastern Scotland will also be quite warm for the time of year, reaching 15 to 17C in many places. Elsewhere it will be cooler, and in western Scotland and Cumbria, highs of 11 to 14C will be typical.

It will be a mild night with plenty of cloud for most of the country, but there will continue to be clear spells in the south and east of England. Temperatures will generally fall to between 8 and 11C, with lows of around 7C inland where skies remain clear. There will be further rain over much of western Scotland and Northern Ireland, which will also spread into parts of north-west England, but elsewhere it will generally be a dry night.

A northwest-southeast split in the weather will continue, with the ridge of high pressure slowly moving away eastwards and pulling some warmer air masses up from the south. It will be another cloudy day with some intermittent rain over much of Scotland, Northern Ireland, and coastal parts of north-west England and north and west Wales. However, after midday the weather will turn brighter and more showery from the west. There is a small chance of some thunder mixed in with the showers, most likely over the east of Northern Ireland and in southern Scotland.

It will be a dry sunny day over the south of England, and for the rest of England and east Wales, after a generally cloudy start, it will brighten up with some sunshine, especially to the east of high ground. Some showers are expected to develop in northern England.

Temperatures will generally be higher than today's in England, with highs of 22-24C, and possibly 25C locally, in inland parts of the south and south-east. Some parts of eastern Scotland may reach 18 or 19C, but generally, it will be cooler elsewhere. 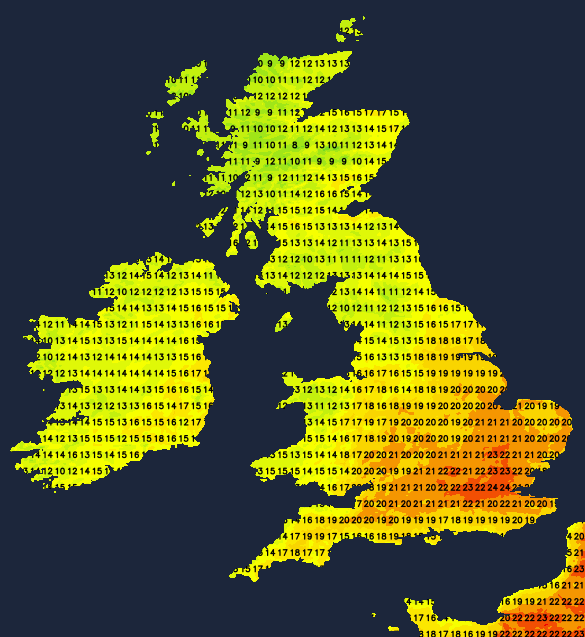 Low pressure will move away north-westwards early next week, bringing a cooler showery day on Monday with plenty of cloud and limited bright or sunny intervals for most. There is potential for some thunder mixed in with the showers in the west. There will also be some longer spells of rain for East Anglia and the south-east. Tuesday looks set to be a day of sunshine and showers, with more sunshine in between the showers. Some of the showers could again be thundery, this time especially in the east.

Another low pressure system looks set to bring a spell of wet and windy weather on Wednesday, but by Friday it looks likely that high pressure will be covering most of the country. There is some uncertainty over the positioning of the high pressure, but it looks probable that southern Britain will be dry and predominantly sunny by the end of this coming week.