In the wake of Storm Arwen, which brought damaging winds and snow to start the weekend, Sunday’s going to be much calmer. After a cold start with a widespread frost, most places will some sunshine, though there will be some wintry showers in places.

Next week will see swings from cold to mild on Tuesday then back to cold by Thursday, before turning less cold to end the week. Cold conditions hang on across eastern England on Monday, however, a warm front will move in across the north and west, introducing milder air. This milder air will flood eastwards across all parts by Tuesday, with temperatures returning into double figures. A showery northwesterly flow on Wednesday following a band of heavy rain moving southeast Tuesday, then winds turn northerly Thursday, with sunny spells and wintry showers and temperatures back into single figures. Turning less cold on Friday as the northerly eases and winds back northwesterly.

Back to today, temperatures widely falling to around or below freezing overnight, so a cold start this morning with frost and some ice on untreated surface where showers fell yesterday or where snow had settled in the north. For many a sunny start, but a band of sleet and snow is moving south from southern Scotland into northern England, rain across N. Ireland, at breakfast time this morning. 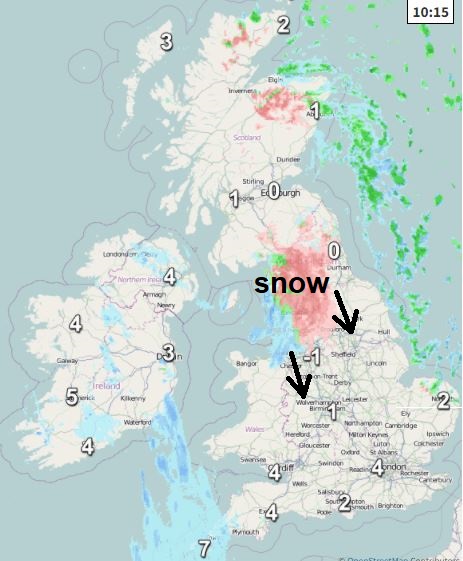 This band of rain, sleet and snow in the north will continue south across England and Wales through the day – falling mostly as snow inland, rain on western coasts, snow settling in places – even at lower levels. Some uncertainty how far east this band will extend as it moves south, perhaps as far east as London as it reaches the south. Otherwise, wintry showers will pepper NE Scotland and North Sea coasts of England, snow perhaps to levels in these. Sunshine ahead and behind the sleet and snow band and away from eastern coastal showers.

By comparison to Saturday, winds will generally be much lighter today, though still a brisk northwesterly wind towards North Sea coasts of England. A cold day though, coldest temperatures in the east – reaching 2-5C at best, 5-8C in the west.

Band of rain, sleet and snow clearing the south this evening, showers continuing along coasts of eastern England, otherwise skies clearing leading to another cold night with a widespread frost. The exception will be across far west of Scotland and N. Ireland – where it will cloud over from the west overnight, preventing a frost, with some patchy rain arriving in far northwest. 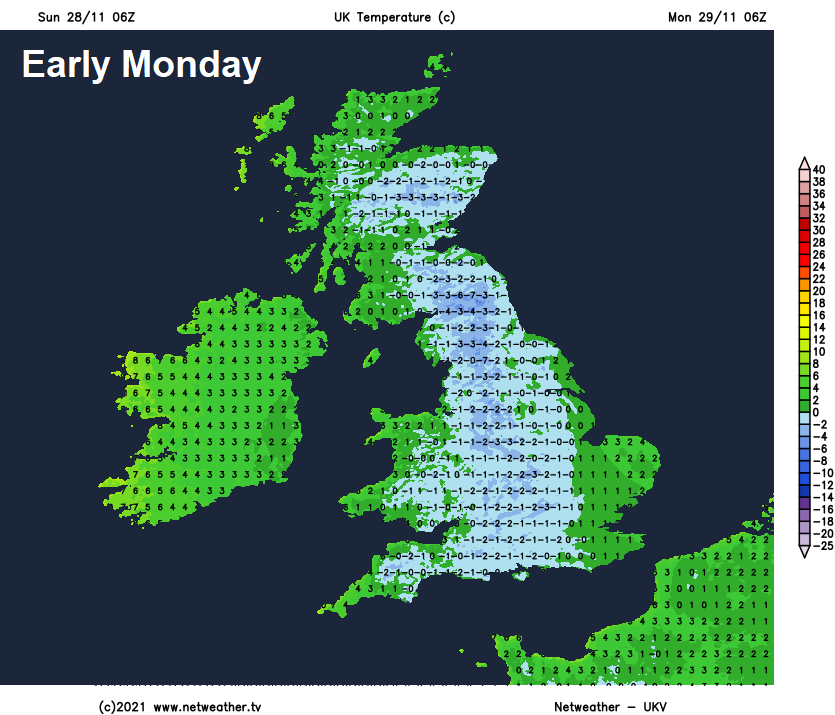 A warm front moving east across the north and west will introduce cloud and patchy rain across Scotland, Northern Ireland, Irish Sea and its coastal areas through Monday. Some snow for a time over the Scottish mountains before milder air moves in from the west across much of the north and far west – with temperatures reaching double figures in the afternoon. Turning cloudier and less cold across Wales and SW England after a cold start, but for central and eastern England it will be a sunny but cold day – temperatures reaching 4-5C at best.

Milder for all on Tuesday following the warm front clearing east overnight. Generally a rather cloudy day, southern areas mostly dry but some patchy light rain or drizzle can’t be ruled out, northern areas will see a band of heavy rain move in from the northwest in the afternoon and evening after a grey morning with the odd light shower. Although it will be milder with temperatures reaching double figures, a brisk northwesterly wind taking the edge of the temperature.

Band of heavy rain clearing the south Tuesday night then Wednesday will see a showery northwesterly flow, most of the showers in the north and west, showers turning wintry with snow over hills in Scotland as winds turn northerly here. Temperatures dropping into single figures in the north in the afternoon, as colder air arrives, but still double figures for the south.

A cold northerly wind on Thursday will feed wintry showers south, most frequent around eastern and western coasts, but showers perhaps easing in the afternoon. Temperatures reaching low to mid-single figures at best. Heavy rain preceded by snow moving southeast Thursday night, followed by a showery northwesterly flow on Friday, though will be milder than Thursday.