Thursday felt notably chillier for all following unseasonably mild weather earlier in the week, when temperatures reached 21C in southeast Britain. The colder airmass of arctic origin swept south across all parts on brisk northwesterly winds yesterday, still a brisk wind and showers in the north and west this morning but both should ease through today, as a ridge of high pressure builds in from the west.

Following another chilly night tonight, especially where skies clear, the weekend will turn milder as the ridge of high pressure building in today shifts east of the UK on Saturday, allowing a southwesterly wind to develop bringing in Tropical maritime air. With the milder air will be more unsettled conditions moving in across northern and western areas. Outbreaks of rain for Scotland and N. Ireland on Saturday, elsewhere drier and brighter with isolated showers. Sunday breezy with showers spreading eastward across most parts.

Turning milder from the west over the weekend, as winds switch from a northwesterly to a southwesterly:

The unsettled but mild and often windy theme looks to continue next week, with deep areas of low pressure brushing past the northwest Scotland. So, spells of rain or showers spreading northeast across many parts during the week, though southeast Britain may stay mostly dry during the first half of the week, with most of the rain in the north and west.

In more detail for today, a chilly start, lowest temperatures at dawn in the far south and far north – where skies have been clearest. Temperatures falling close to freezing at Headcorn in Kent, as low as 1C in Bournemouth by the south coast and Benson in Oxfordshire. 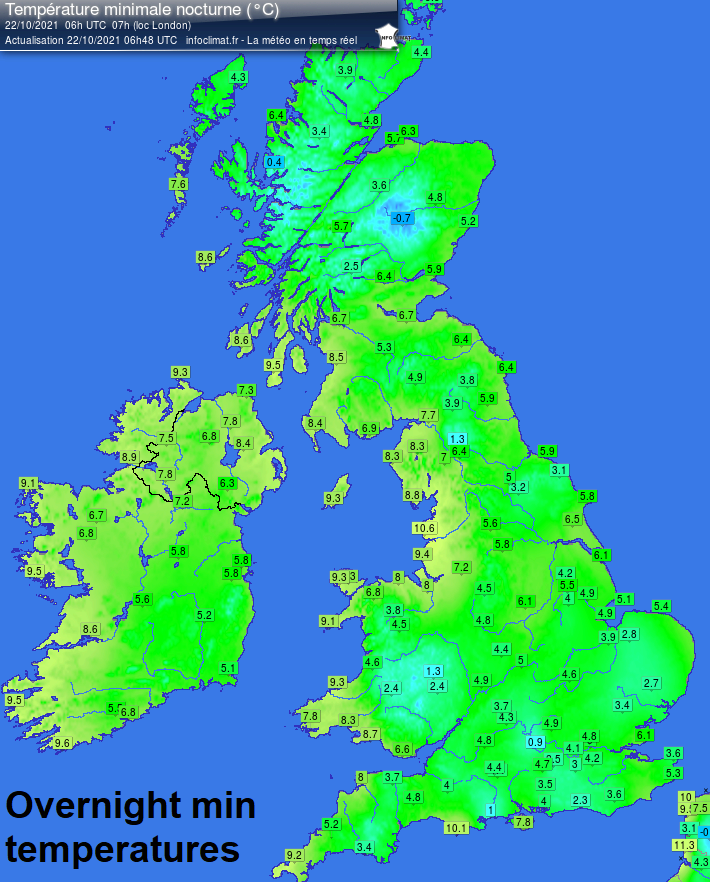 It’s a bright start across southern and eastern England, along with the southeast and far north of Scotland. More in the way of cloud with some showers elsewhere and the general theme today is a cloudier day on-the-whole than yesterday, with showers spreading southeast. Most of the showers will be across central and northwestern areas – but even here tending to become fewer through the afternoon. The best of the sunshine will be across the far south along with northern and eastern Scotland. Winds easing generally, but staying rather windy across NE Scotland and the northern Isles with gales possible and where it will feel quite chilly too. Less cold than yesterday, temperatures reaching 12-14C, but only 9C in Aberdeen.

Any showers fading but generally cloudy but chilly tonight, but where skies clear across eastern areas and far north – temperatures falling into low single figures, enough for a ground frost in a few spots. Also, some mist and fog patches forming where skies clear in the east.

After a chilly start, it will turn milder through Saturday, as a southwesterly breeze develops. Some early brightness in the east, but often cloudy for England and Wales – thick enough in the west to produce patchy drizzle or a few spots of rain. Scotland and Northern Ireland cloudy with outbreaks of rain spreading in from the west during the afternoon and evening. Temperatures reaching 12-14C in the east, 14-15C in the west. Quite a windy spell in the north Saturday night, as a spell of heavy rain clears east here.

Sunday’s looking breezy and generally cloudy with showers spreading eastwards across many parts, showers most frequent across western areas. Temperatures similar to Saturday, highest in the west.

Breezy but mild early next week, showery but mild on Monday, drier and brighter in the south and east on Tuesday, turning wet and windy in the north and west. Staying windy and unsettled for the second half of the week, but mild with winds from the southwest, bands of rain moving erratically and perhaps slowly east across England and Wales, perhaps bringing large rainfall totals in places, showery in the northwest.