High pressure has been in charge for over a week now, bringing fine, dry and settled conditions across much of the UK, though re-positioning of the high pressure system in that time has made differences in cloud distribution across the UK. Temperatures were above average during the second half of last week, in the low 20s Celsius widely, but returned more to average since the beginning of this week. Where skies have cleared at has been pleasantly warm in the day, but at night it has turned quite chilly under clear skies, with a localised touch of frost in places.

A cold front has cleared the south coast this morning. The front a weak affair with just a little drizzle arriving across the south. But the front has introduced cooler conditions for all today and, with high pressure building back in from the northwest and winds falling light tomorrow night, clear skies will allow probably the first widespread frost of the autumn across the north Friday night. 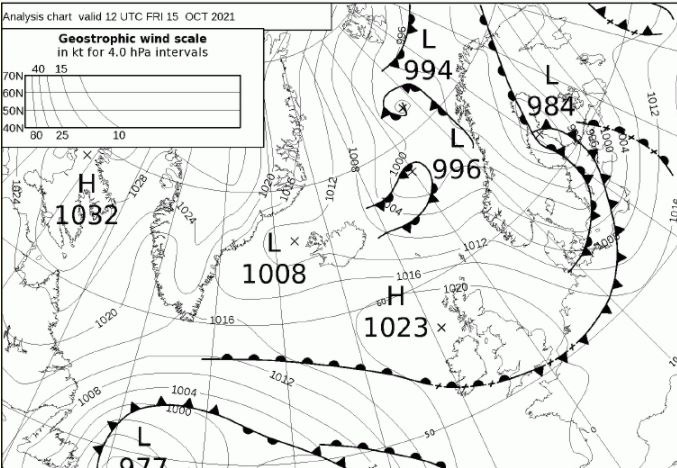 But, after a cool dip, as shown on the temperature graph below, temperatures will be on the rise over the weekend, as high pressure slides southeast into the near continent and low pressure moves in off the Atlantic across Ireland by Sunday, drawing in a mild southwesterly flow drawing in sub-tropical air from a long way to the south over the Atlantic.

However, it will also turn unsettled and windy across the north and west over the weekend, with spells of rain or showers, though southern and eastern England looks to stay mostly dry.

Model operational runs in good agreement for unsettled conditions across all parts days 4-10 (next week and following weekend).

Unsettled conditions look to spread across all parts early next week, as high pressure sinks southeast over the near continent and a deep long-wave upper trough moves east over the North Atlantic towards the UK. A strong jet stream at the base of trough moving into the west aims at the UK – driving frontal systems across the UK ahead of a deep low-pressure system that moves in close to the northwest by mid-week. So, all areas will become windy, particularly so in the north and west – where isobars will become closer together, with gales possible. Spells of rain or showers will cross most areas through much of the week, though rain will be heaviest and most persistent across the north and west, as the accumalated rainfall totals map up  to Friday week shows.

Unsettled for all Monday to Thursday next week:

It will be quite mild though during the first half of the week, with winds from the southwest. Temperatures tumbling after mid-week, as winds switch from a southwesterly to a northwesterly or northerly.

High confidence from GFS and ECMWF operational models that low pressure / upper troughing in the mean will shift towards the east toward/over Scandinavia later in the week, possibly allowing a brief cooler / colder but showery northwesterly or northerly polar flow on Thursday. A brief ridge of high pressure toppling in from the west on Friday – indicating perhaps the driest day of the week.

After a warm start to the week ... 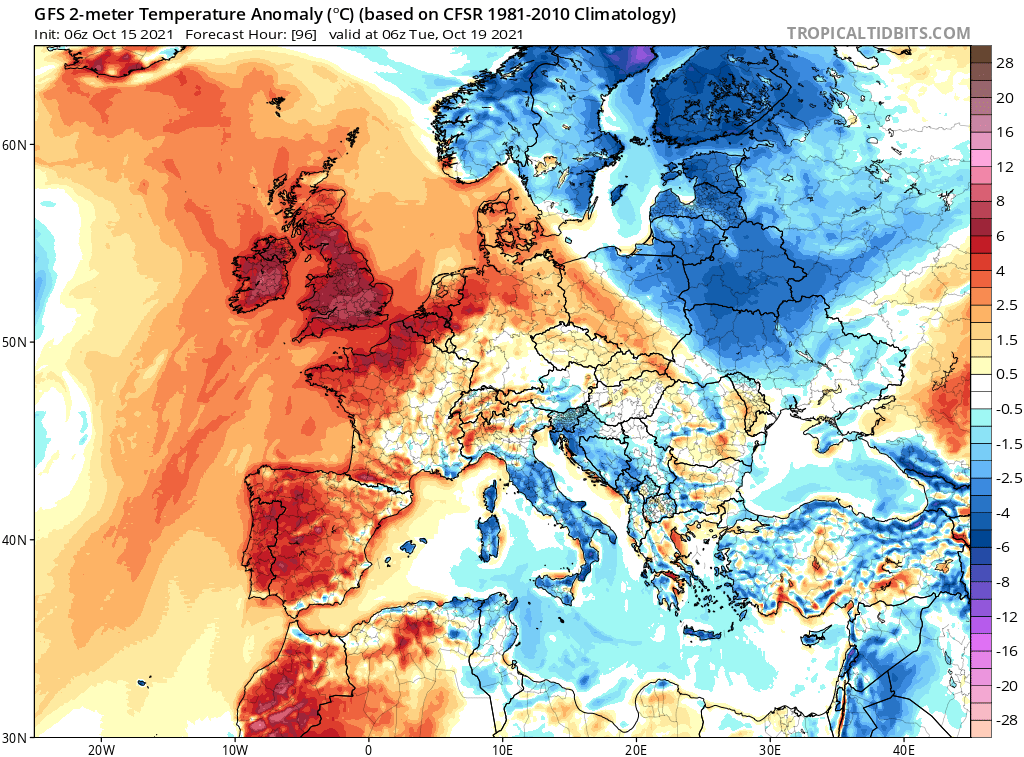 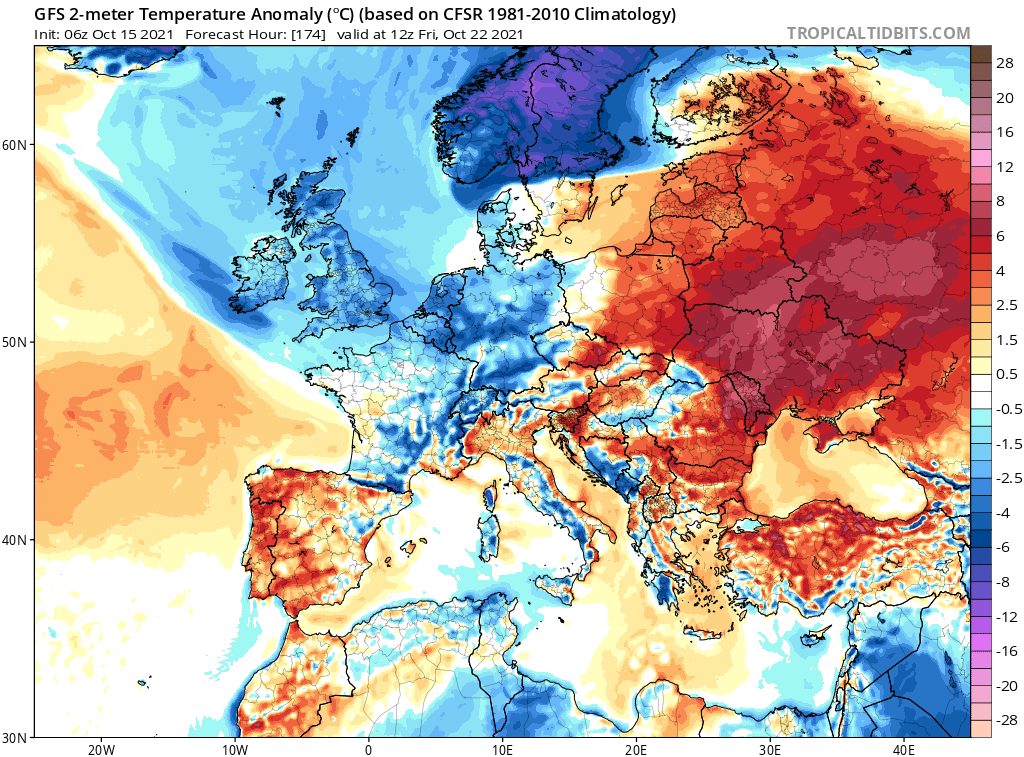 GFS and EC operational runs are in agreement on unsettled conditions quickly returning from the west across all parts next weekend after a calmer end to the week – and with the jet stream indicated to move east on a more southerly track close to southern UK, there may be the potential for deep lows to cross southern Britain into the last week of October, with potential for gales.

Ensemble guidance for second half of October point to unsettled conditions throughout.

A look at the 00z EPS 500mb mean days 4-8 (Mon 18 – Fri 23 ) shows a upper troughing and cyclonic flow across northern Europe, while a ridge extends north across western Greenland. 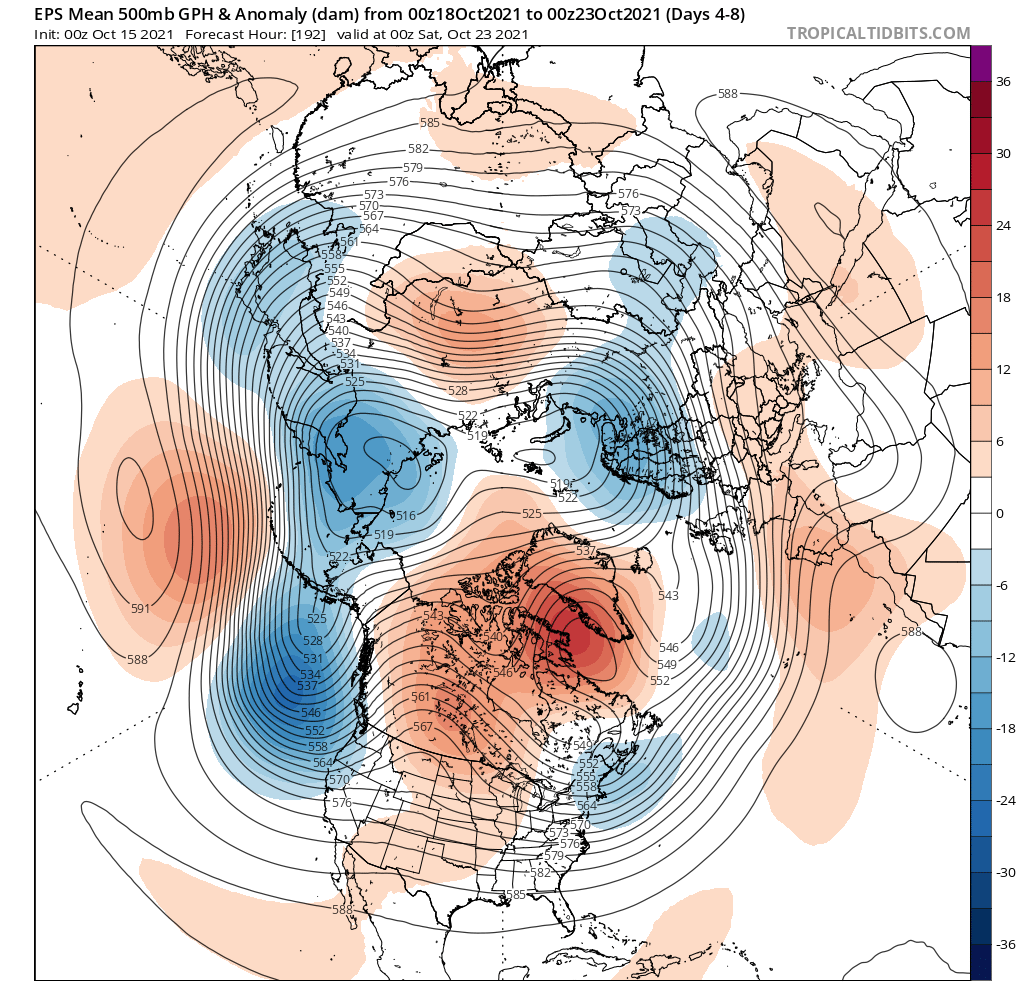 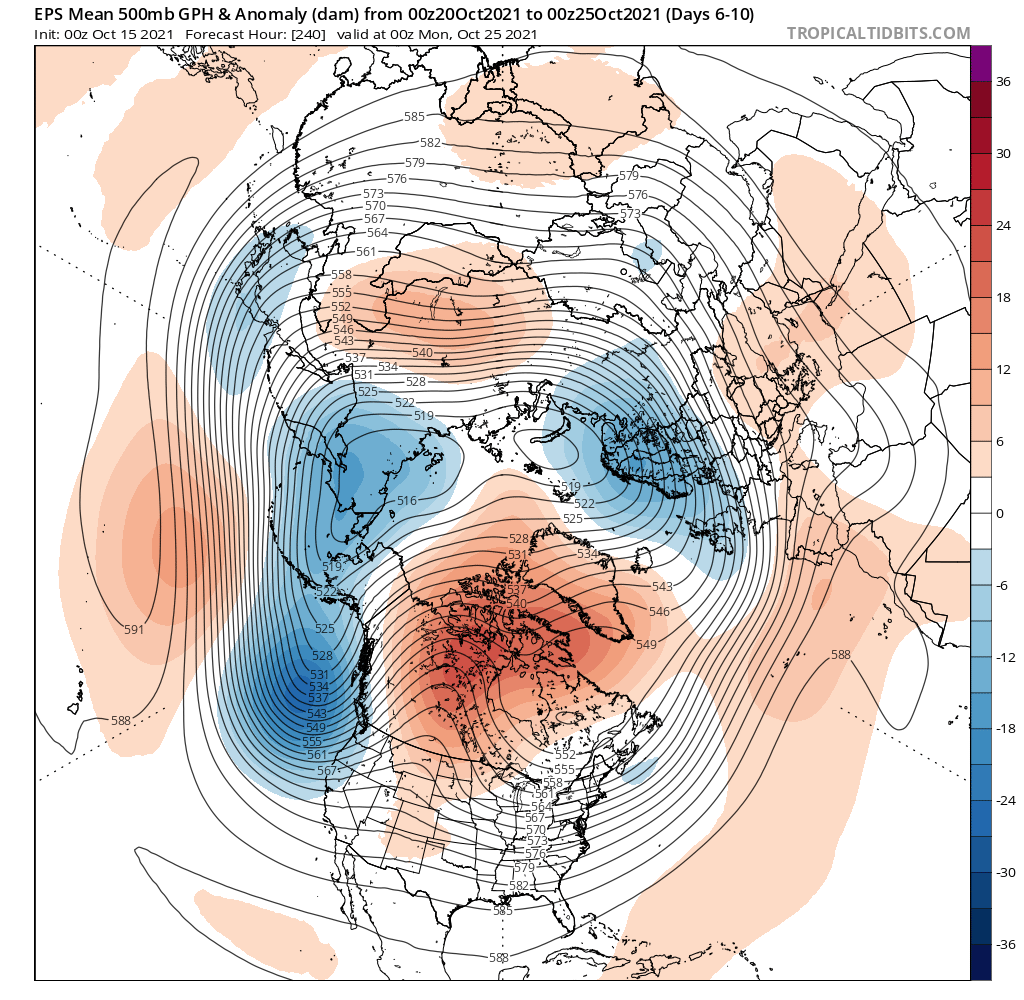 A look at the latest ECWMF weeklies, issued last night, week 1 shows upper troughing covering the eastern Atlantic, including the UK, and NE Europe from next Monday (18th) through to Monday 25th October. Meanwhile, an upper ridge is present over Greenland. Lowest heights over Scandinavia / NW Russia – as a tropospheric polar vortex lobe moves down from the arctic to here next week – perhaps in response to the ridge pushing poleward over Greenland. But, generally, a cyclonic upper flow across the UK and Ireland through next week. 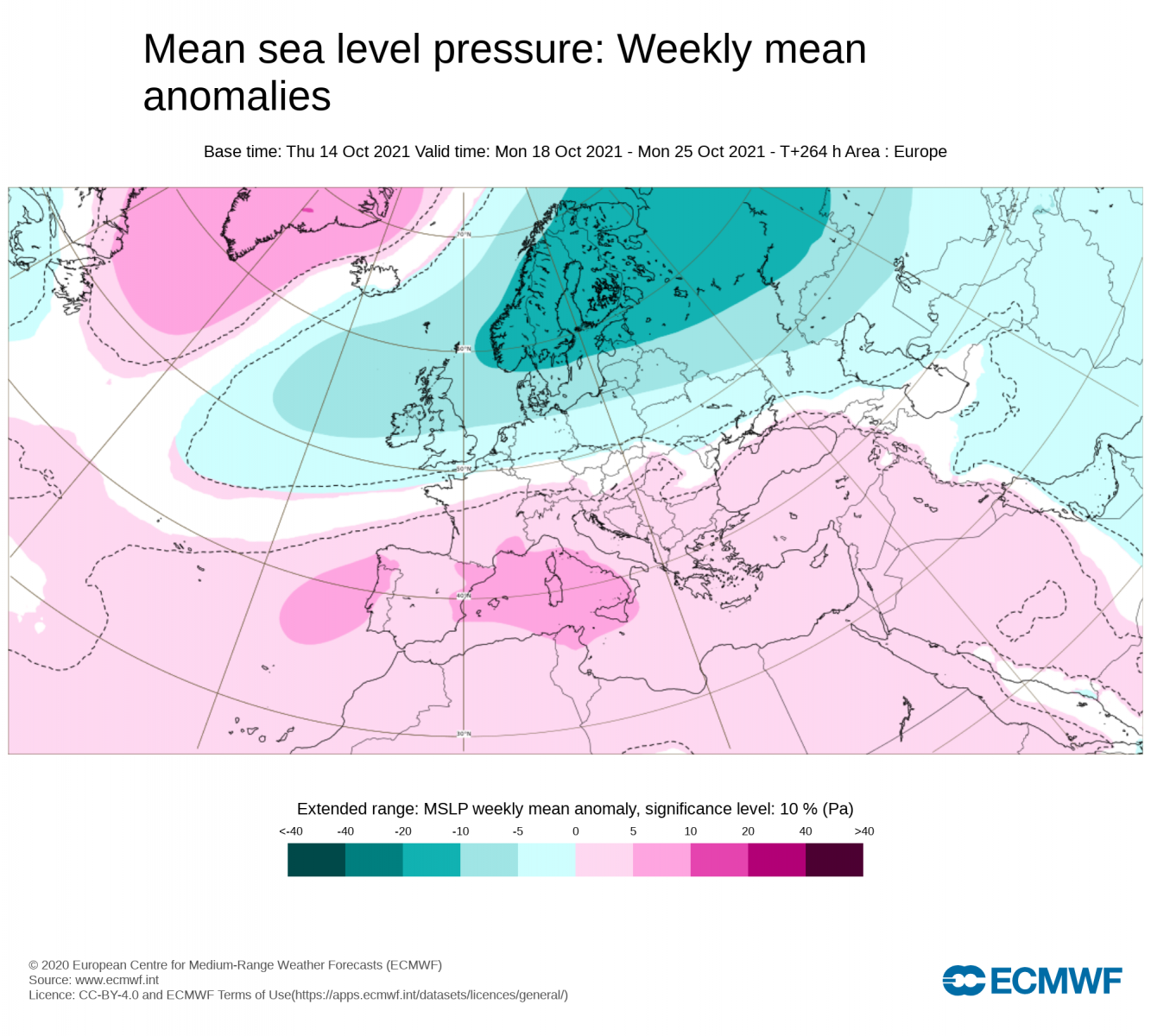 Into the last week of October, the week 2 chart from the EC weeklies shows upper troughing / low heights extending right across the North Atlantic on into NE Europe. This suggests a continuation of cyclonic and unsettled westerly flow across the UK and Ireland right through to the start of November. Not that the Greenland positive heights / ridging anomaly has weakened considerable too. 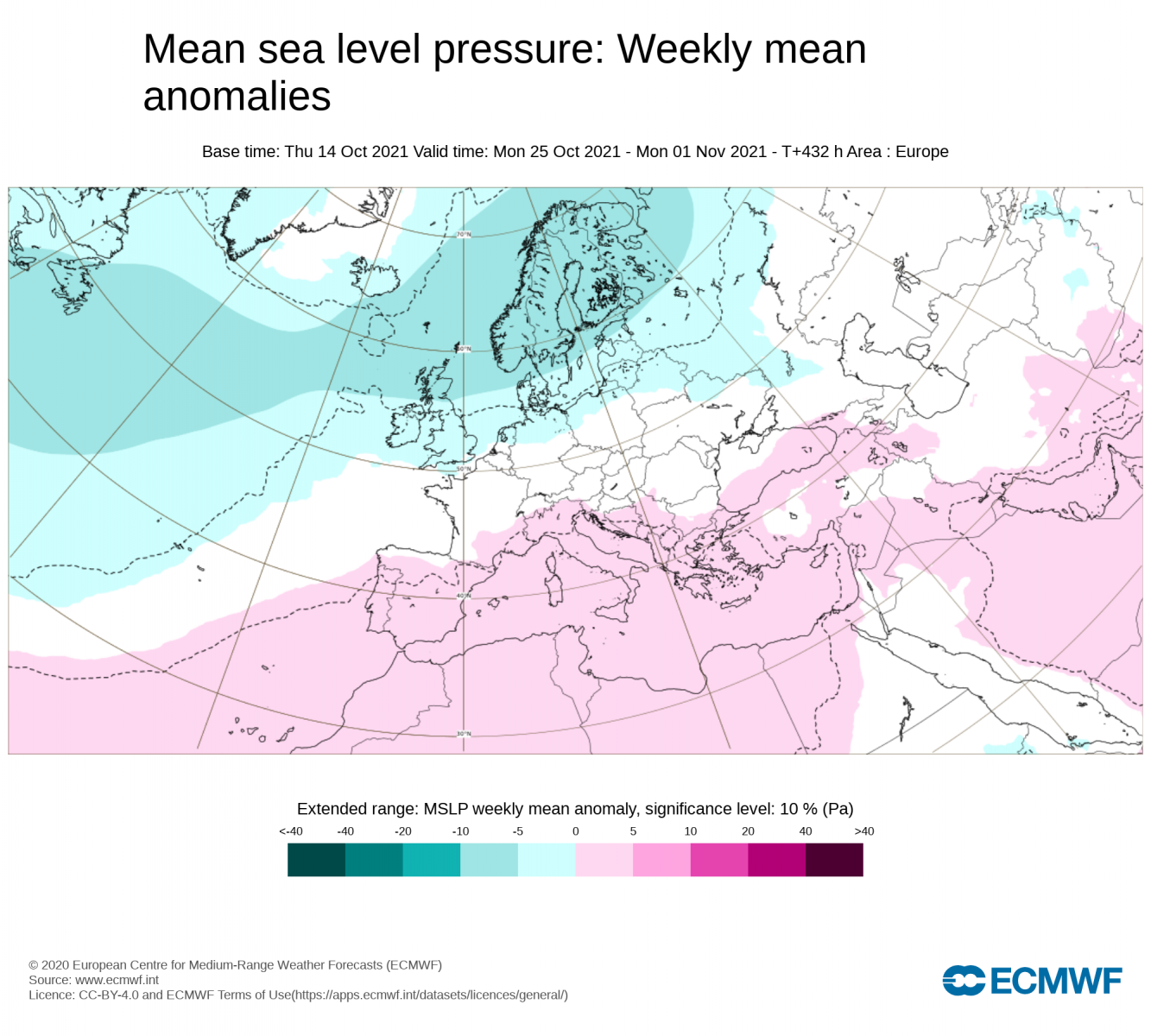 So, reasonable confidence of an unsettled period lasting throughout the last two week of October.