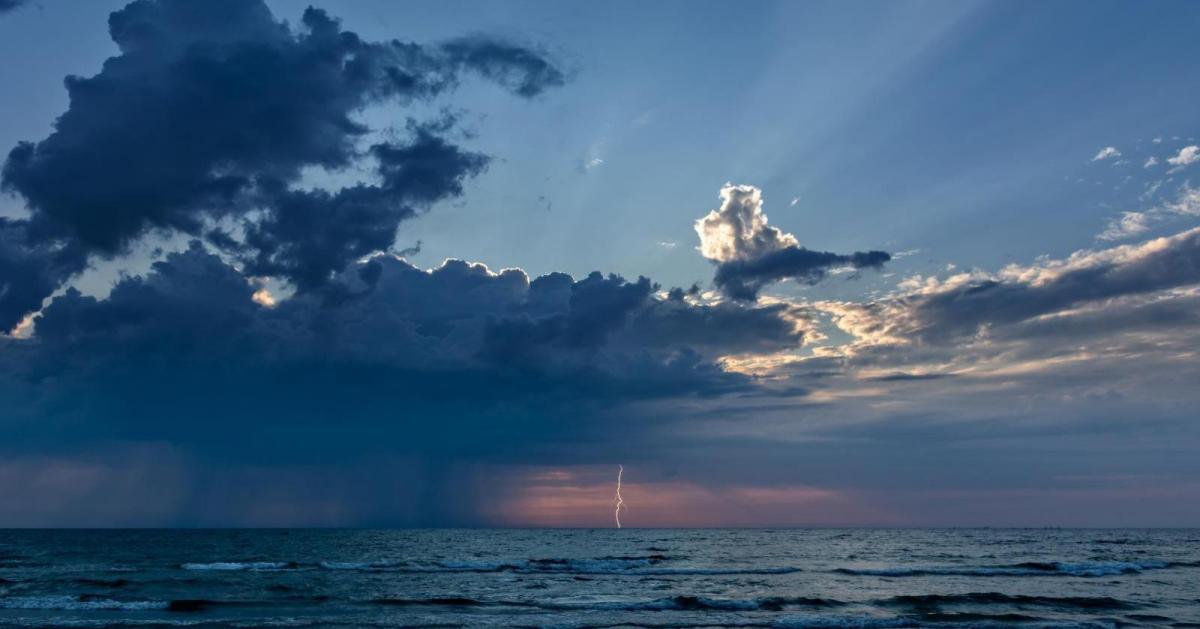 Heatwave fading, unsettled conditions moving in across the south this weekend

Thursday saw the hottest day of the year so far in Scotland, Wales and Northern Ireland. For the third time in a week since the heatwave began, N. Ireland once again broke its highest temperature record, with Armagh reaching 31.4C yesterday, beating 31.3C at Castlederg on Wednesday which surpassed 31.2C at Ballywatticock on Saturday.

Friday will be less hot than recently across eastern and southern England, with a strong easterly breeze developing. However, N. Ireland and the west of mainland UK will be slower to cool down – with another very warm or hot day in store here. And it looks to remain very warm and sunny in the northwest over the weekend too. But the heatwave will come to end across central and southern areas of the UK, as high pressure that has brought the heat this week eases away to allow an area of low pressure to move in close to southern England. This low will introduce more unsettled conditions from tomorrow onwards, with heavy and perhaps thundery downpours moving in across central and southern areas for the weekend. Some of the downpours could be locally torrential and lead to some flooding, the Met Office have issued a Yellow Warning for rain covering Saturday and Sunday for central and southern parts of England and Wales. Northern areas escaping most of the downpours and staying dry, warm and sunny.

Back to this morning, and it’s a grey and cloudy start for some central and eastern areas of England and eastern Scotland, but elsewhere there is plenty of sunshine from the word go. Low cloud will persist along some eastern coastal areas, but generally breaking up inland where it’s started grey to join most areas to a dry and sunny day with temperatures quickly rising. Risk of a few isolated heavy showers or thunderstorms developing across higher ground of SW Scotland, Wales and N. Ireland this afternoon. Temperatures lower than recent days across eastern and south England, thanks to a brisk easterly breeze developing – here reaching 21-23C. But very warm across Wales and western parts of England, where it’ll reach 26-27C. Warmer still for western Scotland and N. Ireland – where temperatures will reach 28-29C. 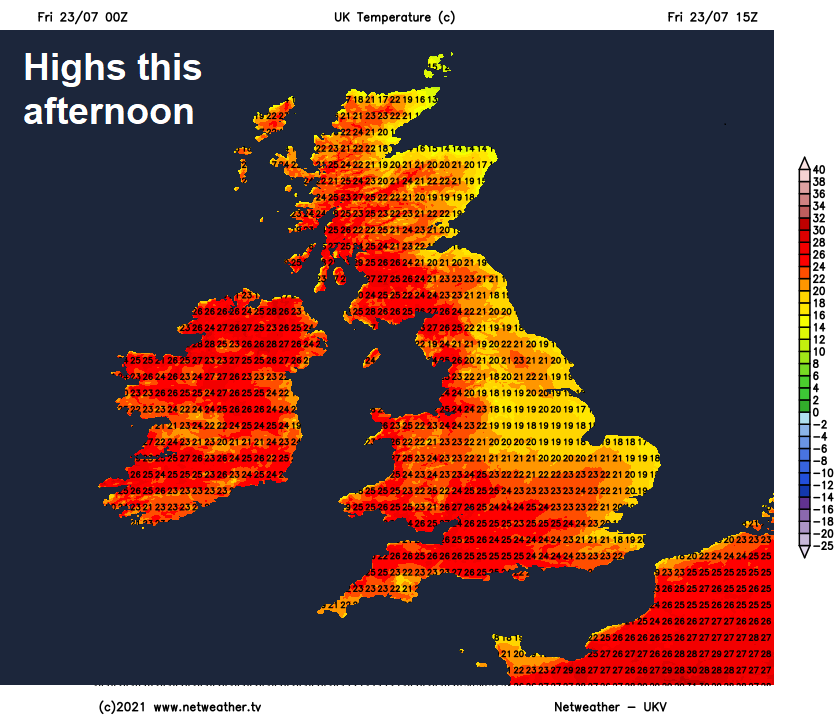 As we move into Friday evening and the overnight period, outbreaks of heavy and thundery rain will spread in from the SW approaches and English Channel across southern counties of England and perhaps south Wales by the end of the night. Then Saturday will see a cloudier day with heavy and thundery downpours spreading erratically northwards across England and Wales, some locally intense downpours could lead to some localised flooding. However, much of northern England and perhaps far north of Wales staying dry and bright or sunny – temperatures reaching 19-22C. Scotland and N. Ireland seeing another dry, sunny and very warm day, temperatures reaching 23-25C, though perhaps cloudy and cooler towards North Sea coast of Scotland.

Area of low pressure close to the southeast on Sunday, so a day of heavy showers or thunderstorms across southern areas of England. A risk of hail and localised flooding from any storms. Elsewhere looking mostly fine, dry and sunny, though the odd shower can’t be ruled out. Again, the highest temperatures across western Scotland and N. Ireland – where it’ll reach 23-24C, elsewhere 20-23C 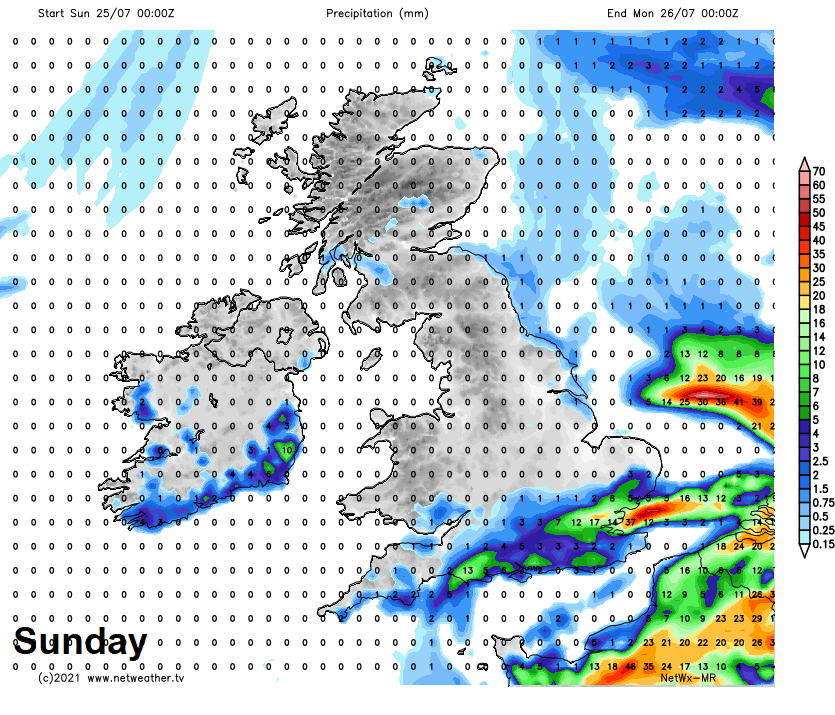 Low pressure over the North Sea on Monday, so heavy showers and thunderstorms developing, but mostly eastern areas, N. Ireland and Wales could stay mostly dry. With a northwesterly breeze, feeling cooler than recently. 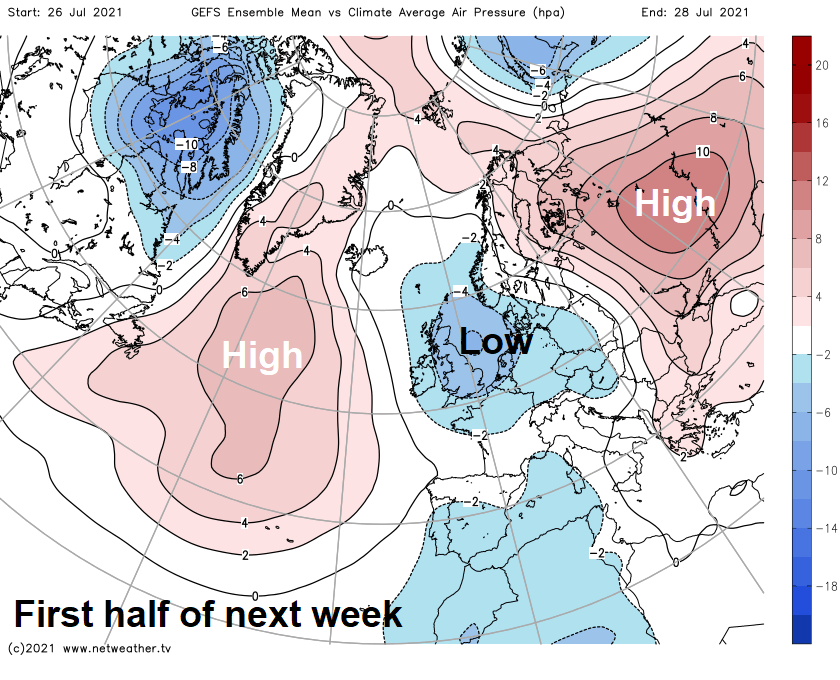 Unsettled and cooler than recent conditions continuing for the rest of the week, with a fairly strong westerly jet stream settling across the UK bringing a succession of low pressure systems in off the Atlantic over northern Britain. Tuesday seeing further showers developing, particularly across the south, where they will be thundery in places, cloud and rain spreading in across Scotland and N. Ireland. Breezy or windy, with further spells of rain or showers spreading across all parts for the rest of the week, temperatures close to or perhaps a little below the average.