It’s been a cool start to the week across many areas, particularly at night, with the coldest start to a June day since 2012 on Tuesday, with the temperature falling to -2.4C in Altnaharra in the northern Highlands. Though Scotland ended up being the warmest place in Britain as well, with Aboyne reaching 21.4C in the afternoon.

However, a warm front moving in from the northwest today and tomorrow will remove the cool air and introduce warmer more humid conditions for the rest of the week. But behind the warm front moving southeast will be low pressure dropping down across Britain towards the end of the week – which will bring increasingly unsettled conditions, with spells of rain or showers for many on Friday. Low pressure and unsettled conditions with rain or showers becoming confined to southern Britain over the weekend, though it will feel humid, warm where the sun does appear. Northern areas turning drier, brighter and fresher, as ridge of high pressure builds in.

Synoptic situation for the rest of the week - warm front moving southeast bringing cloudier skies and patchy rain, followed by cold front bringing heavier rain to the north and showers when it reaches the south on Friday: 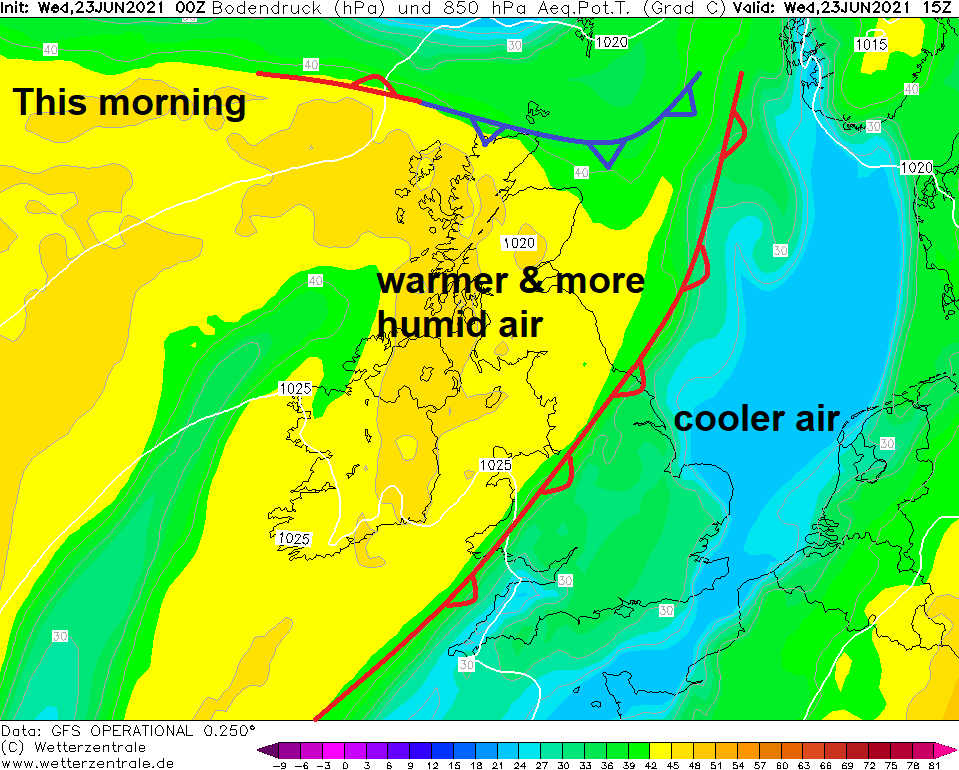 It’s another chilly start today, Wales the coldest area this time overnight, with temperatures falling to just above freezing in Powys, Ceredigion and Snowdonia. It will quickly warm up though in the strong June sunshine this morning across much of England and Wales. After the cloud and rain over the last few days, some welcome sunshine for southern parts this morning, it will stay sunny across SE England and East Anglia through the afternoon.

But further north and west, a warm front slowly slipping southeast and bringing cloud and patchy light rain or drizzle across Scotland, N. Ireland and into northern England and north Wales this morning will continue southeast across Wales, western, northern and central England through the day. Cloudy and damp across western areas this afternoon, but some sunshine hopefully developing across eastern Scotland – lifting temperatures to 20C here, 16-17C under the cloud and rain in the west, but across southern and eastern England a warmer day than of late, temperatures reaching 18-22C. 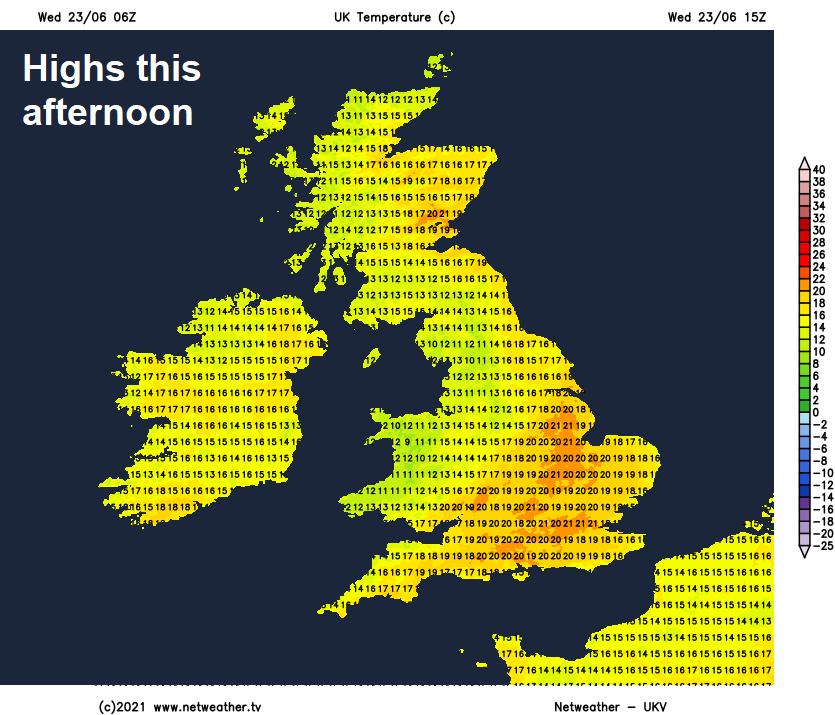 Not so chilly tonight, with much of the Britain cloudy as that warm front continues to slip southeast, bringing patchy light rain, more persistent and heavy rain moving into NW Scotland later in the night, as a more active cold front approaches here. Then for Thursday, a weakening warm front will continue to slowly move southeast across England, bringing a cloudy day for much of England and Wales, with showery bursts of rain or drizzle here and there. Not any better further north across Scotland and N. Ireland, cloudy too, but with outbreaks of rain, heavy at times, spreading southeast along a cold front, turning windy too.

Low pressure moves down the North Sea close to eastern Britain on Friday, bringing showers for a time across northern areas before drier conditions arrive from the north across Scotland, while a cold front will push south and east across England and Wales in the morning, bringing a band of rain followed by showers. 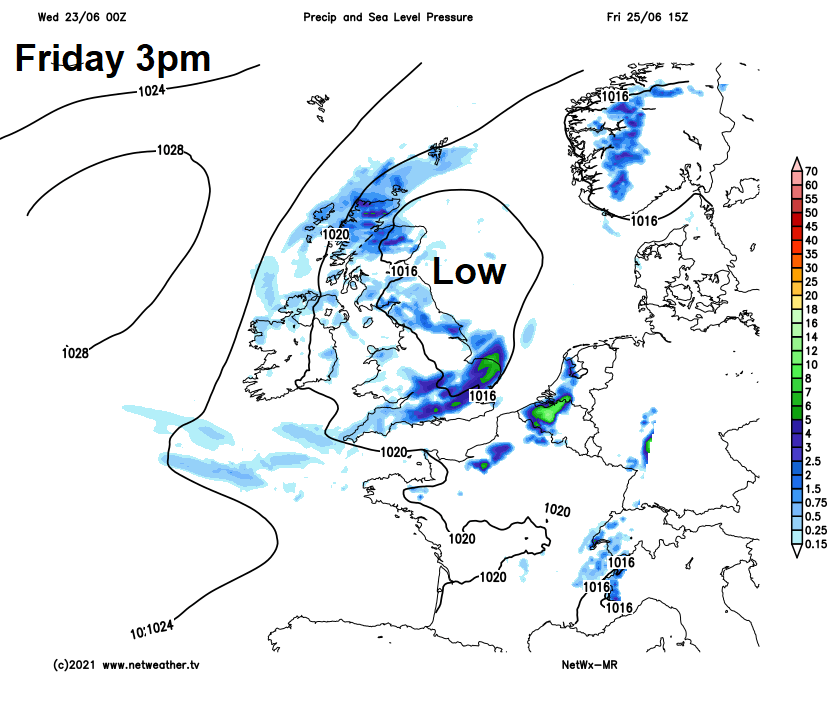 Some uncertainty over detail for the weekend, but it looks like low pressure will be close to southern areas – bringing often cloudy conditions with spells of rain or showers, perhaps thundery across southern England, Midlands and south Wales both days. But where the sun comes out, it will feel warm and humid – temperatures in the low 20s Celsius. Further north it’s looking drier and sunnier for the weekend, as a ridge of high pressure establishes, though the far northwest maybe cloudier at times.

Unsettled conditions, with thundery showers, may linger for a time across southern England and south Wales early next week, but should hopefully ease by mid-week to join the rest of Britain to settled conditions with sunshine under the influence of high pressure, though a small chance that it may stay unsettled in the south all week.