Sunshine and heat will be theme for Sunday before cooler weather starts to move down from the northwest by Monday. That won't be the end of the road for the hotter weather though, with the southern, central and particularly the southeastern quarter of the UK seeing more of it, particularly on Monday and again on Wednesday. The combo of heat pulsing up from the south and cooler, Atlantic air trying to move in from the west will become a theme during the week, and from midweek onwards is likely to result in some fireworks with thunderstorms and torrential downpours possible.

Surprisingly June 13th is the only date in June never to reach 30c, and it looks likely to fall just short again this year, with highs likely to peak at 26-29c across a good part of England today. 28.3c is the record for the day, though, so that could fall. For Wales, Scotland and Northern Ireland, 22-25c will be about the max. However, northwestern Scotland will be cloudier and cooler, with some outbreaks of rain moving southeast through the day.  You can track today's top temperatures here. 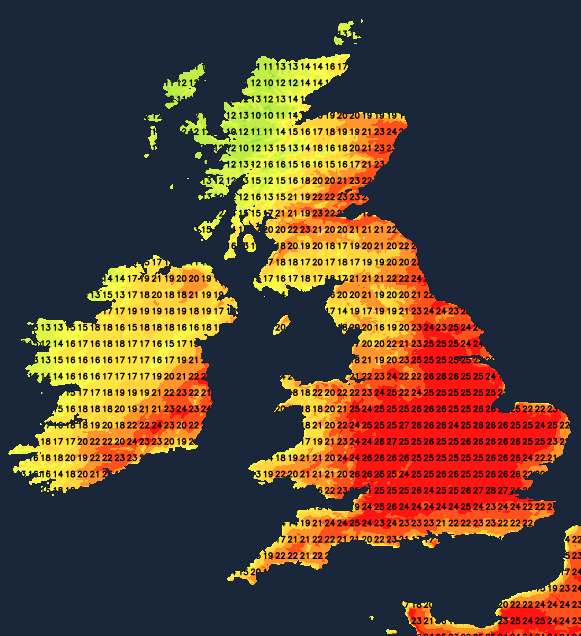 This evening, the rain in the far northwest will encroach further into Scotland and Northern Ireland, also bringing cloudier skies across a good part of Scotland and into the far north of England. For the remainder of the country though, it'll stay fine and muggy - bringing an end to a day where many will have seen wall to wall sunshine. For England and Wales, temperatures will only slowly fall away overnight, making for a pretty uncomfortable sleep, with lows not dropping below the mid or high teens for many. Further north, with cloud and some heavy bursts of rain moving southeast before they begin to fade in the second half of the night, it'll be a cooler night, with much fresher air following the rain band along a weather front.

With that front continuing to move southeast during Monday, there's going to be a real temperature contrast, as the south and southeast keep the heat and sunshine for much of the day. London may reach 30c or so, although with the front moving ever closer, cloud may increase enough in the afternoon just to suppress temperatures a little and keep the maximum in the high twenties.

Other parts of England and Wales will have more cloud through the day, with highs of 18-24c typically - with some parts of the Midlands seeing the warmest temperatures during the morning before the front arrives to cool things off. It'll be a very different day for Scotland, with sunny spells, a scattering of showers and a keen westerly wind with highs of 13-17c generally.

By Tuesday, the front will be out of the way, so England and Wales will have sunnier skies and fresher highs of 21-25c with a ridge of high pressure overhead. Scotland and Northern Ireland, on the other hand, will start to feel the effects of an Atlantic low moving ever closer, with cooler temperatures and rain moving into western areas during the day.

The low will do a couple of things into midweek -  it'll throw a weakening down from the northwest, in a very similar vein to Monday. It'll also help pump up another pulse of hotter, humid air from the south into southern, central and eastern England. That heat could again see highs tip into the 30's Celsius in the southeast if the cloud stays at bay for long enough during the day. 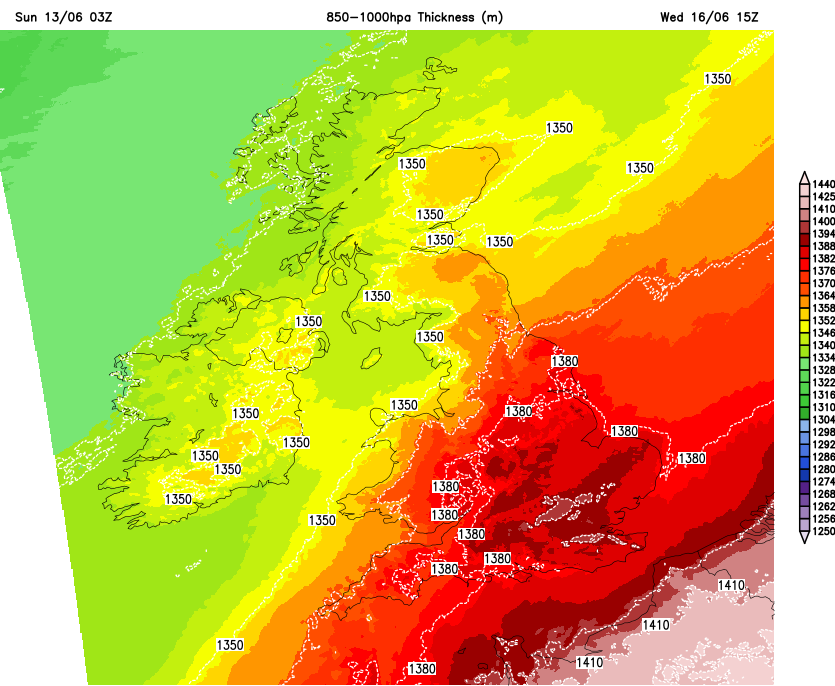 The issue with having a plume of heat and a cold front in close proximity is that it can create some fireworks with heavy rain and thunderstorms looking likely for some, particularly from later on Wednesday. There is a great deal of uncertainty over the details of this, but the possibility is there for some very lively storms and torrential rain in affected areas.

As we move through the latter part of the week, cooler, fresher air will be slowly edging further southeast, but that plume of moist, very warm air is likely to put up a fight and stick around further southeast for longer. Which as well as keeping it warmer and muggier, it'll also mean the ongoing threat of thundery downpours and storms moving up from the south.