Analysis: Heat this weekend before a breakdown next week

A fairly strong jet stream will run east across Scotland to end the week before lifting further north on Saturday, by Sunday – the jet stream running northeast between Faroes and Iceland by early Sunday. This will allow an upper-level ridge to extend northeast from the Azores across NW Europe, including southern Britain, between low pressure/heights towards Iceland and a cut-off low over Iberia. The increase in air thickness and subsidence of air across southern Britain, as the upper-level ridge builds in, will allow surface temperatures to correspondingly lift over the weekend, with the 500-1000 mb thickness exceeding 564dm across southern Britain on Sunday. This will allow temperatures to climb into the mid to high 20s Celsius with sunshine, perhaps 29-30C in the southeast, though cloud cover from a warm front clearing east in the morning suggests some uncertainty as to how high temperatures will get.

The animation below shows the upper-level ridge strengthen across southern England on Sunday, with 500-1000 thicknesses increasing, allowing surface temperatures to increase. 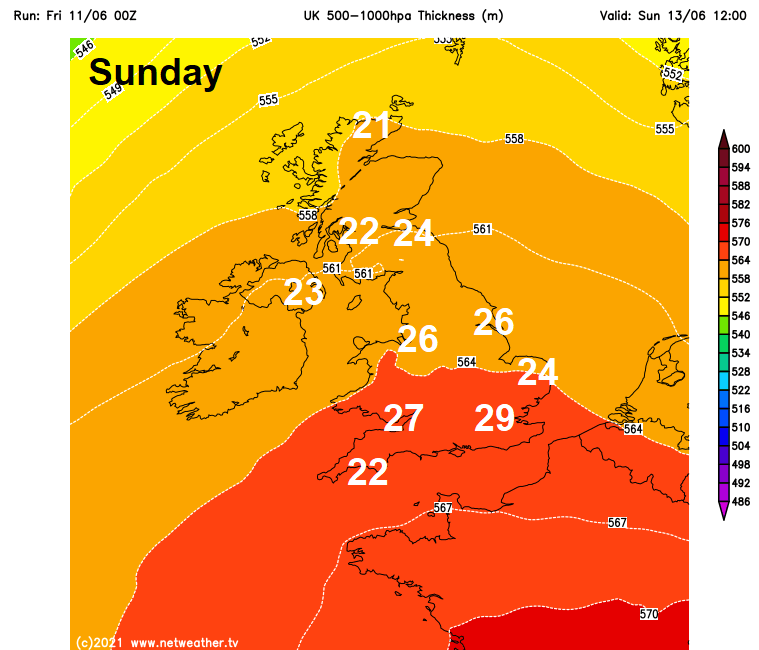 Into early next week, the jet stream will dip back south again to be running over Scotland. This will mean pressure/heights will fall from the northwest on Monday, particularly across the north, with a waving cold front pushing southeast across the north in the morning, bringing a band of rain, perhaps heavy for a time. The cold front continues southeast across England and Wales in the afternoon, but the front weakening as it moves into high pressure to the south, so bringing cloudier skies and the odd spot of rain, followed by cooler and fresher conditions. The very warm and humid weather building over the weekend looks to hang across SE England & E Anglia ahead of this cold front before it arrives Monday night, with temperatures perhaps reaching the mid-to-high 20s Celsius. 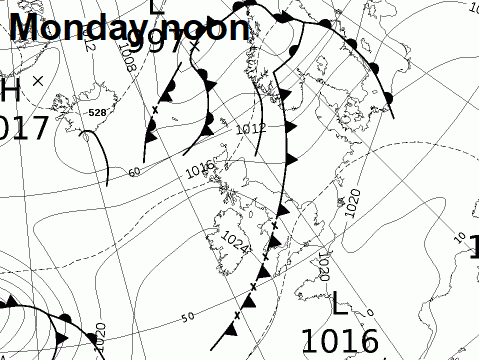 The weak cold front reaching the SE England Monday night, then all parts feeling cooler and fresher for Tuesday. Weather models generally agree that Tuesday is looking mostly settled, dry and bright day for England and Wales as ridge of high pressure builds in from the west, still warm in the south. A frontal system moving ahead of a fairly deep low out in the Atlantic looks to spread rain and strengthening winds in across Scotland and N. Ireland later in the day, though timings uncertain this far out. 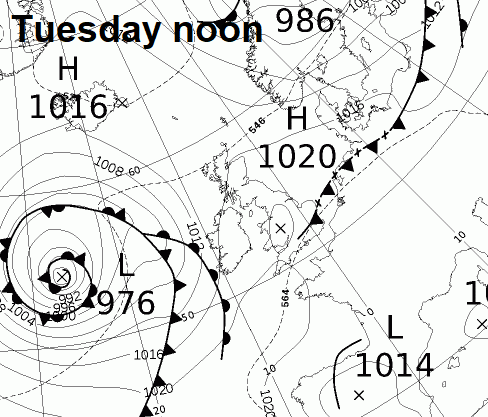 Models generally agree on a cold front bringing rain to northern areas Tuesday night, before the front then continues east across England and Wales on Wednesday, weakening as it does, ahead of a fairly deep area of low pressure thar tracks northeast to the NW of Scotland. There is potential, albeit uncertain for now, for the threat of heavy thundery showers towards SE England for a time Wednesday ahead of the approaching cold front, as the upper trough over the Atlantic amplifies, winds back and pull north a plume of warm and humid across France and towards SE England. This is dependent on the cold front stalling and how far northwest the surge north of warm and humid air occurs in tandem with a low moving north/northeast from Iberia across France mid-week. The models seemed to have backed away from this idea yesterday, with the thundery breakdown along the northwest edge of the plume staying further east over the near continent instead, but this morning they are bringing back this idea, ECWMF prolonging the threat into Thursday. One to keep an eye on. Away from the southeast, fresh, bright and breezy – with a few showers in the northwest. 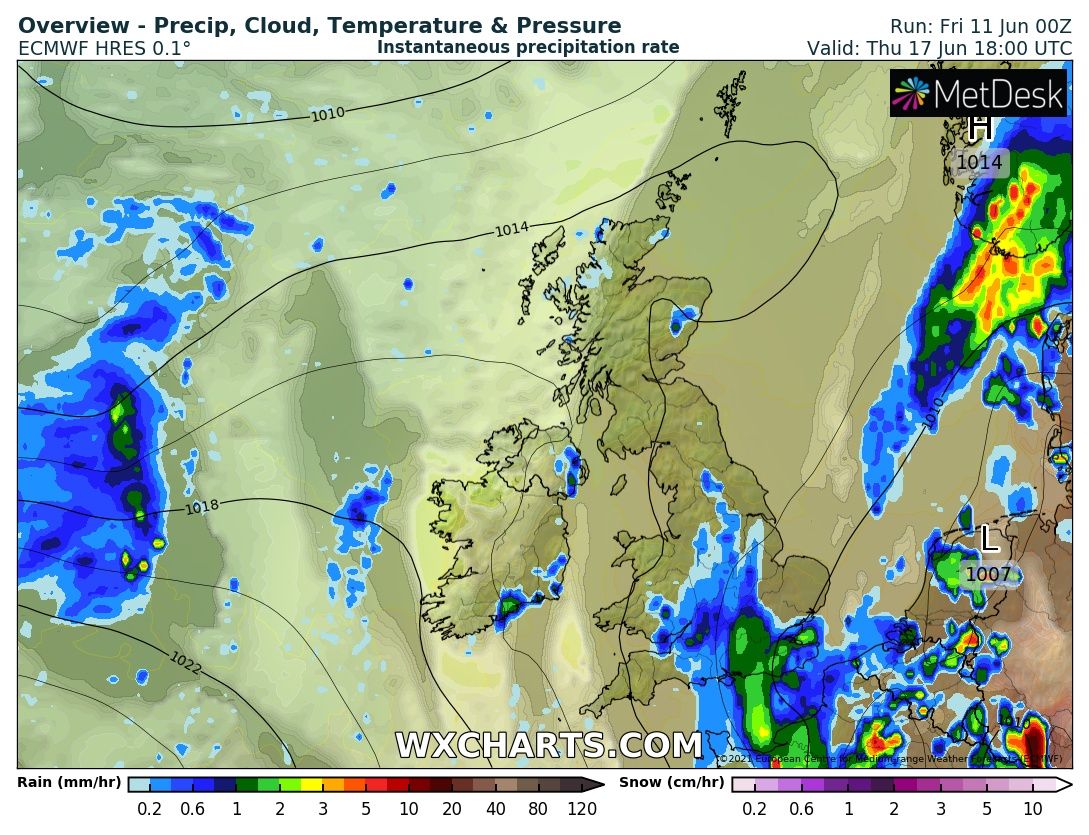 Either way, thundery breakdown or not the middle of next week, the general theme from GFS and ECMWF that go into the medium range, is for Atlantic troughing rather than high pressure to take over control of our weather later next week, with low pressure close to the north, so cooler and showery conditions taking hold across all parts later next week, with brisk westerly or northwesterly wind, though it may likely remain drier, sunnier and warmer towards the southeast, with higher pressure here.

The following weekend of 19/20th, the models currently indicate a deep Atlantic low moving in near or over the UK, this would likely bring cool and unsettled conditions with showers or longer spells of rain. The unsettled conditions may continue into the last third of June too, with high pressure less likely to be in control than low pressure, looking at longer range ensemble guidance – which shows Atlantic upper trough / low pressure in the means across the UK. But that doesn’t rule out brief very warm or hot spells if low pressure positions favourably to the west and southwest, which could pull warm and humid air from the near continent. 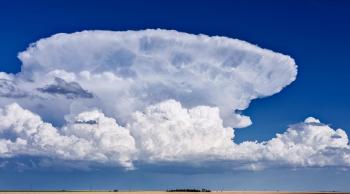 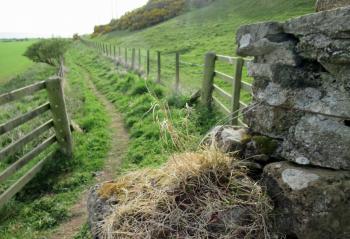 Out for a ramble this weekend, what's the weather as you Walk your Way