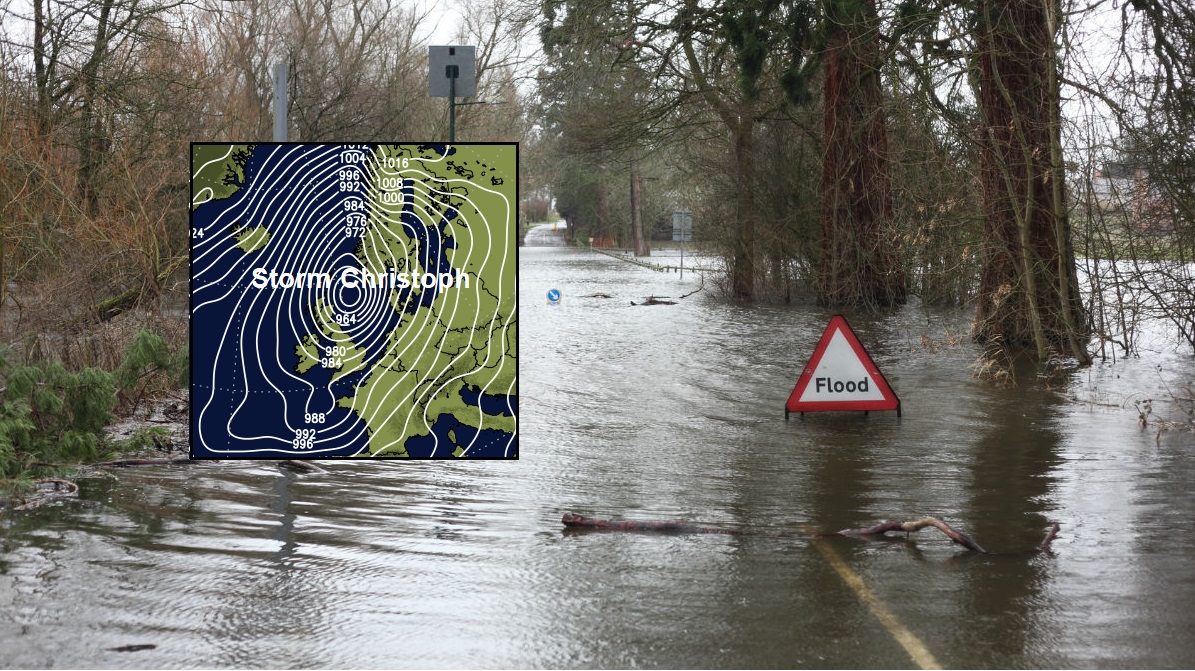 Part One Christoph has brought a lot of rain and resulted in plenty of flood warnings and alerts. The Environment Agencies and councils have been working hard erecting flood barriers and clearing waterways and drains to allow better flow as the water levels rose.

There has been an amber warning for rain over northern England, the Midlands and eastern England as the conditions on the ground and existing river levels were already causing concerns. Any extra heavy rain would likely to result in flooding. PM Boris Johnson is holding a COBRA meeting to consider the flooding situation this afternoon.

During Tuesday the main rain band edged further north with the East Midlands not seeing much rain. Now the Amber warning has been lowered to yellow here but continues over NW England, Yorkshire into the East Midlands until Thursday morning.

Wales, the Midlands into northern England continue to run the risk of impacts from the recent rainfall on Thursday, even as the weather becomes drier. There will still be a lot of water to come down off the hills and some rivers are slow to respond, meaning peak levels could be on Thursday or Friday.

As the main frontal band edged northwards during Tuesday night, it hit the cold air over Scotland and there was snow. Again on Wednesday, there has been a wintry mix for Angus, Fife and the Southern Uplands.

Part Two involves the deepening low centre. So far winds haven’t been a particularly impactful part of Storm Christoph the event, although it is windy over southern Britain with a fresh southerly and coastal gusts are beginning to pick up. 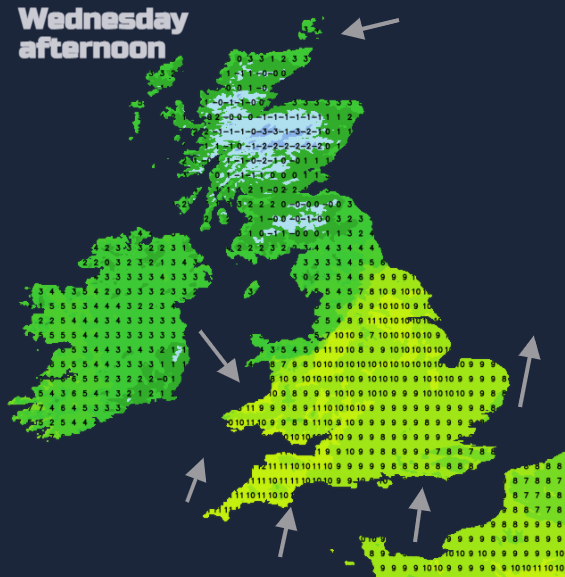 Midweek there is a large temperature contrast across the UK. As it goes dark today, the worse of the weather will be concentrated along a trough with a cold front. Behind this cold air will push southwards but also swing right across Wales and England overnight.

Along this band there will be even heavier rain through the evening and Wednesday night, gradually shifting eastwards. The worst of the heavy rain will clear away from eastern England in the small hours of Thursday. The rain warnings end at 6am but the river issues will continue.

“River flooding many continue in parts of England until Sunday. “EA

This is heavier rainband is driven by the deepening low pressure and the sharp temperature gradient. As the rain band tilts north-south through Britain overnight temperatures plummet in the colder NW to west winds but the mild air remains ahead of the front with strengthening south winds. Gusts of 50 to 70mph are forecast with widespread gales for the far SE Of England and concerns of severe gales through the Straits of Dover. 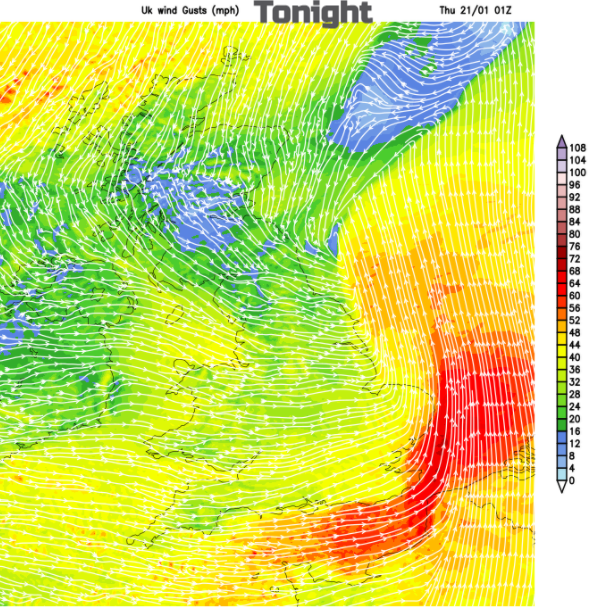 There are two small areas covered by wind warnings tonight, but some uncertainty remains about how this low will develop. So, for English Channel coasts, particularly the eastern Channel around to the Suffolk coast there will be gales and wild conditions. 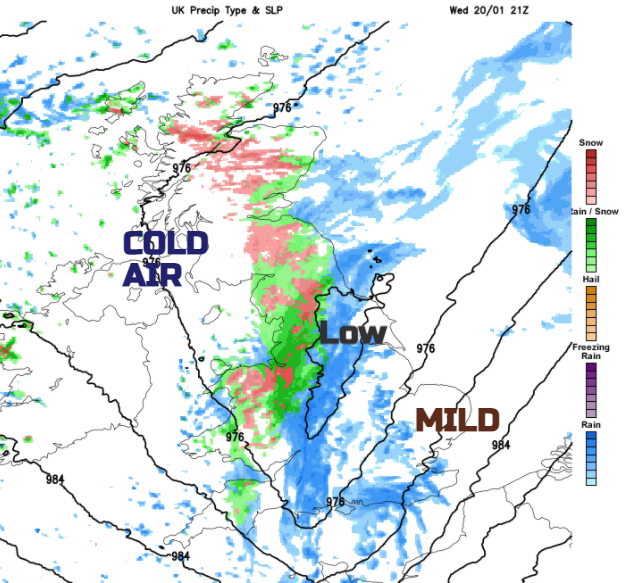 Another concern will be wintry conditions on the back edge of the rain. Overall, any snow will be over the hills without significant coverings but still for any essential travel there could be a spell of wet snow and ice following the rain and so tricky conditions to be gritted.

As the frontal band pivots and collides with eastern Scotland, there will also be snow. And from the far north bands of showers coming down over the NW Highlands. There is a snow warning over southern Scotland and northern England overnight into early Thursday but more of central Scotland could be affected. Northern Ireland has an ice warning, in the colder air but with drier conditions than recently. There will be wintry showers which could result in a few cms of snow over the Antrim Hills or the Sperrins. 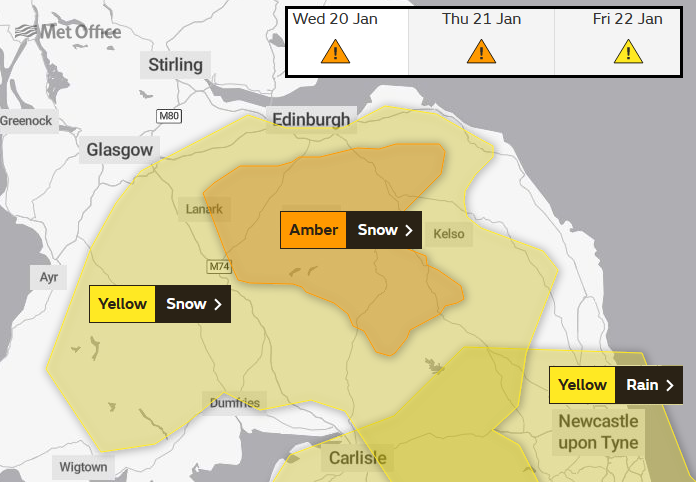 For Thursday there is some uncertainty around the deepening of the low and how the wintry and windy weather then affects Britain, mainly Scotland but also eastern England.

As the low continues to deepen out in the North Sea bands of icy rain and snow will swirl southwards over Scotland, into Northern Ireland and then northern England. Northeast Scotland and the Northern Isles look to have a horrendous day with strong winds even gales and heavy rain or significant snowfall. Two more weather warnings are out for Thursday, heavy rain Orkney, Caithness and coastal Aberdeenshire in cold northerly strong winds even gales with gusts over 60mph. Snow over the Grampian, for Cairngorm and snow showers pushed south over the NW Highlands in the strong winds.

With fresh to strong NW to westerly winds for eastern Britain, it will feel even colder. This wild wintry weather over NE Scotland will continue all day. For much of the UK, it will be a dry even brighter picture, much colder and with a scattering of wintry showers from the northwest. 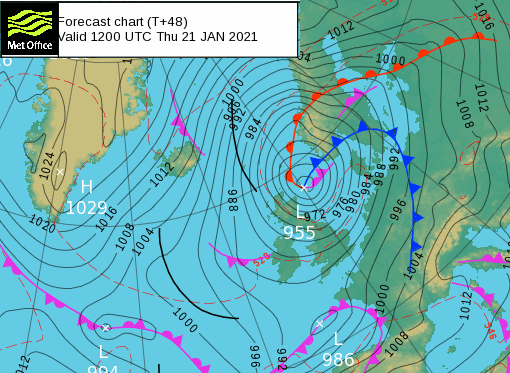 Norway will feel the wind effects of this low (Frank by then) and also see snow as the central pressure dips below 955hPa.

So, we move into the second phase of Storm Christoph, with more rain overnight and lingering flooding issues. The winds will strengthen overnight with concerns for the far SE Of England, coastal East Anglia and then on Thursday for NE Scotland all day but eastern Britain in the morning.

It will be much colder, with wintry weather, ice, hill snow also sleet and some snow to low levels. And still sodden ground. Remember that the warning areas show regions where there will be significant impacts from the snow or rain but other parts could still see heavy rain or snowfall.