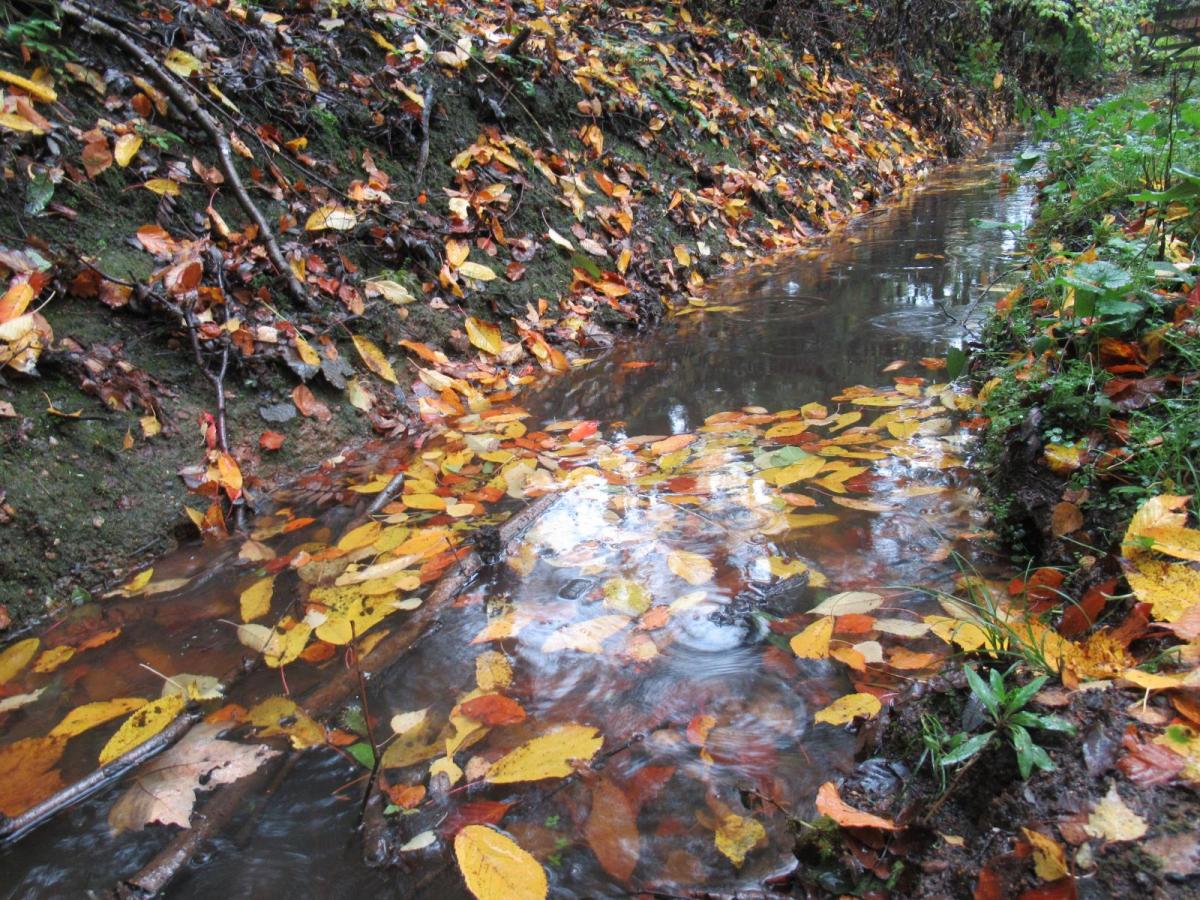 There is going to be a lot of rain over the next few days, particularly for western areas of the UK and Ireland. And strong winds with gales by the weekend. The powerful low pressure, which contained the remnants of Hurricane Epsilon and is continuing to bring a huge swell and incredible surf to the west coast of Ireland, is now retrograding closer to Greenland.

Coastal Flooding SW England “Large offshore wave heights exceeding 7m are forecast, together with F7 westerly winds. Spray and overtopping due to powerful waves…Conditions in exposed locations are likely to be hazardous and people are advised to take care next to the coast.” Environment Agency

Nipping up from the SW is a sequence of developing low pressures along a frontal boundary and this will just keep on feeding in the wet weather. Areas such as the Welsh mountains, Cumbria, SW Scotland, with high ground where the air is forced upwards, will see large rainfall totals and there are flooding concerns. Also adding into the mix for our UK weather will be Zeta. This just made landfall as a high-end Cat 2 hurricane over Louisiana on Wednesday and will move across the US back out into the Atlantic Thursday night and once more bring tropical oomph to a low pressure heading our way. The rain warnings continue from today into the weekend when they extend across more of Britain. 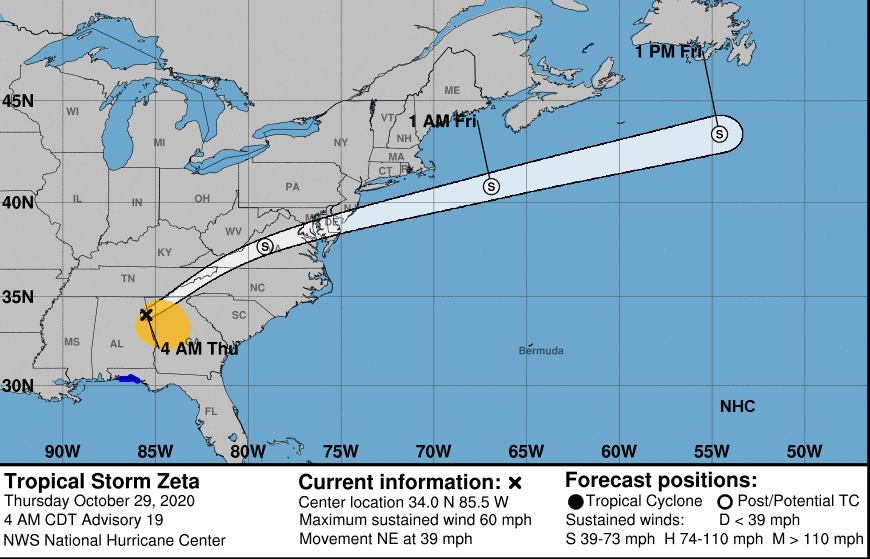 Southern England saw lively downpours on Wednesday as a line of torrential rain and thunderstorms moved over the SE during the afternoon. With ominous skies, squally showers and lightning it was quite dramatic. We have widespread warm front rain with the cold front moving over Ireland later today. 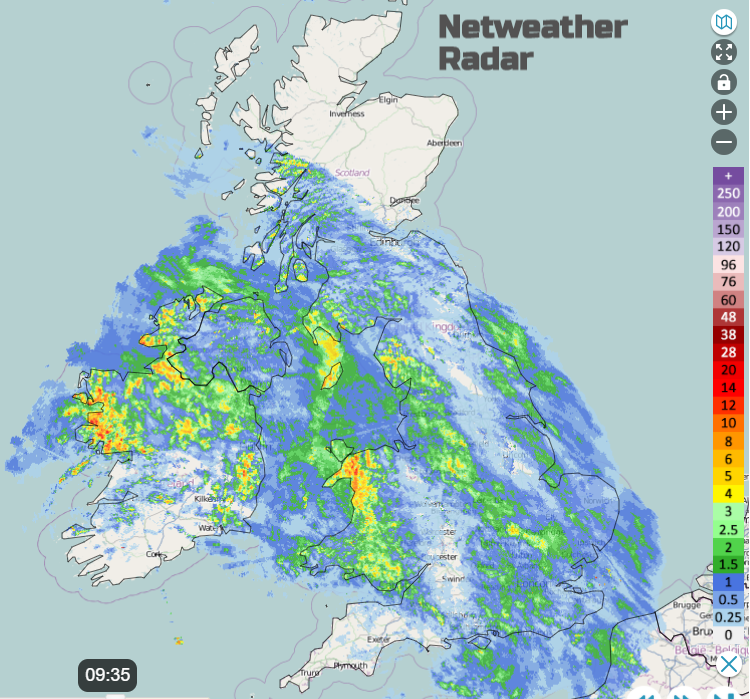 "Periods of heavy rain may lead to flooding and disruption to transport." Met Office

The warm front rain continues to push north and east this morning, with a clearance for SW Britain by lunchtime. By teatime the main rain will be over northern Britain and Northern Ireland, leaving cloudy, mild but damp weather. Temperatures will rise, up to 14 or 15C but with a brisk SW wind, strong through the Irish Sea. The far NE of Scotland won’t see the rain until late afternoon and will be cooler with a fresh SE wind. 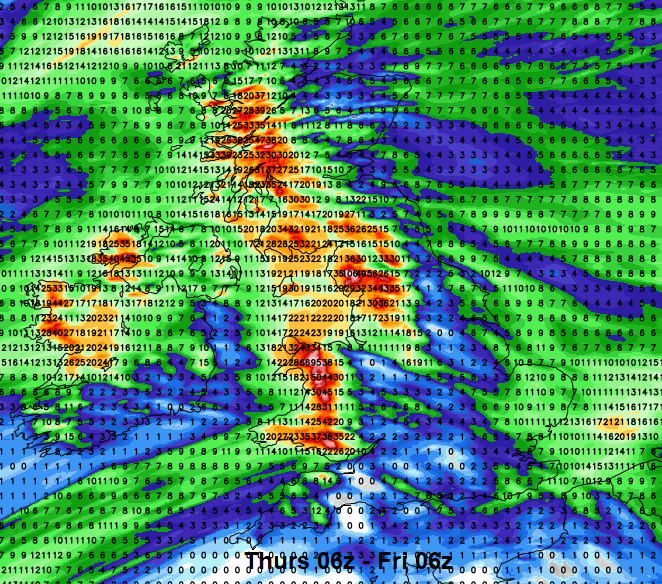 The Environment Agency is warning for widespread flooding across Wales and parts of England from rivers and surface water Thursday to Sunday. With the particular mention of the River Severn in the Midlands from Friday. And SEPA highlight flooding concerns for North Ayrshire and Galloway for today, with more to come. 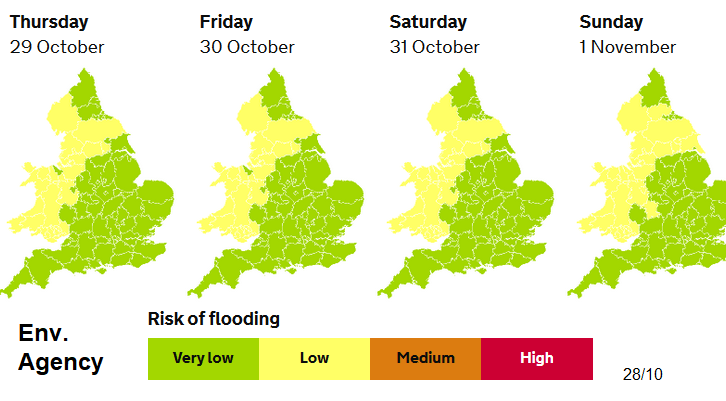 As today’s rain clears away from northern Britain tonight, the trailing cold front will bring more heavy rain to Wales and SW England. It will be a mild, blustery night with clearing skies in the north of Britain and for Ireland where temperatures will fall for Friday morning as the winds ease down. The frontal band sticks across SSW England, more patchy over southern England into East Anglia and the very mild southeast but keeping more cloud. To the north brighter and cooler with early showers for Scotland but these fade as pressure builds briefly to the south. 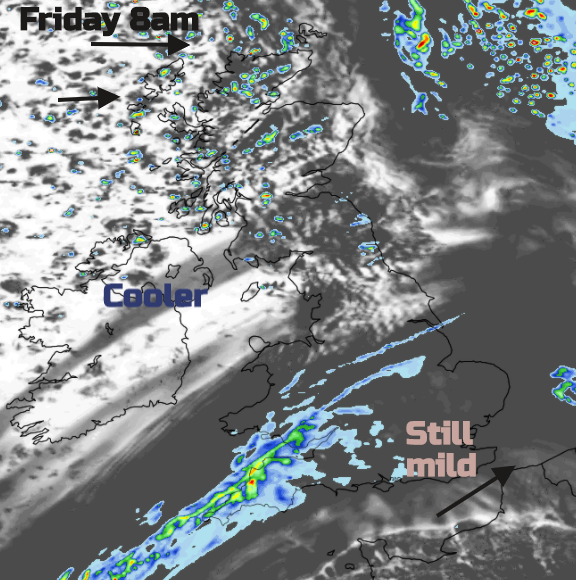 This weekend will see very wet and very windy weather. Vigorous low pressure spin up from the SW which include the remnants of hurricane Zeta. Saturday looks windy for southern Britain with the strong southerly winds and gales spreading to more of Ireland and the UK during Saturday night and on Sunday. With more into Monday. The recent rain, soggy ground and then even more heavy and persistent rain from these lows means that there are strong flooding concerns. 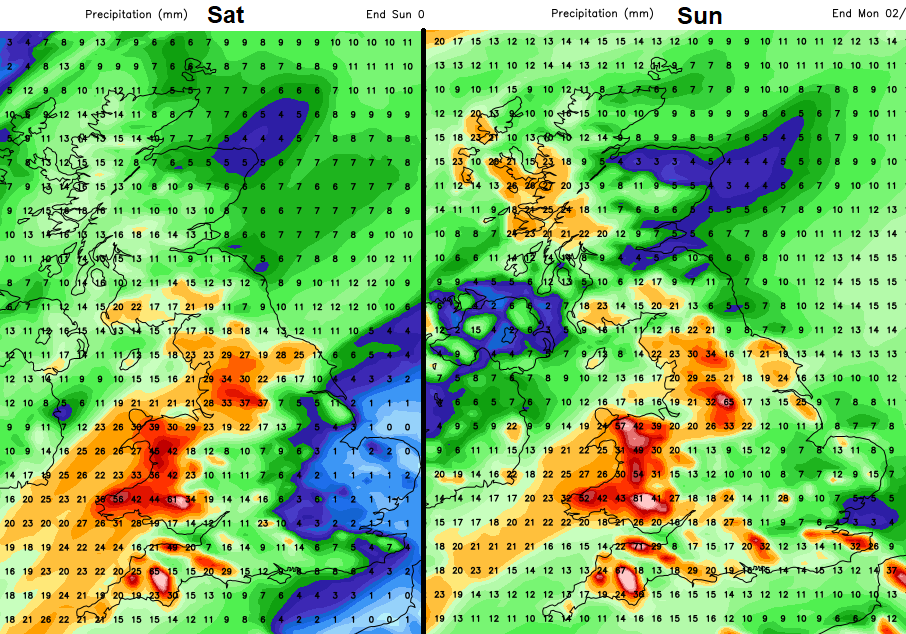 Keep an eye on the flood alerts and warnings.