After a very wet 24 hours for the north and particularly northwest of the UK, along with Ireland, it's similar areas in the firing line today. From tonight and into tomorrow, southern and central England will also get in on the act as Storm Barbara (named by the Spanish Met Office) moves up from the continent. 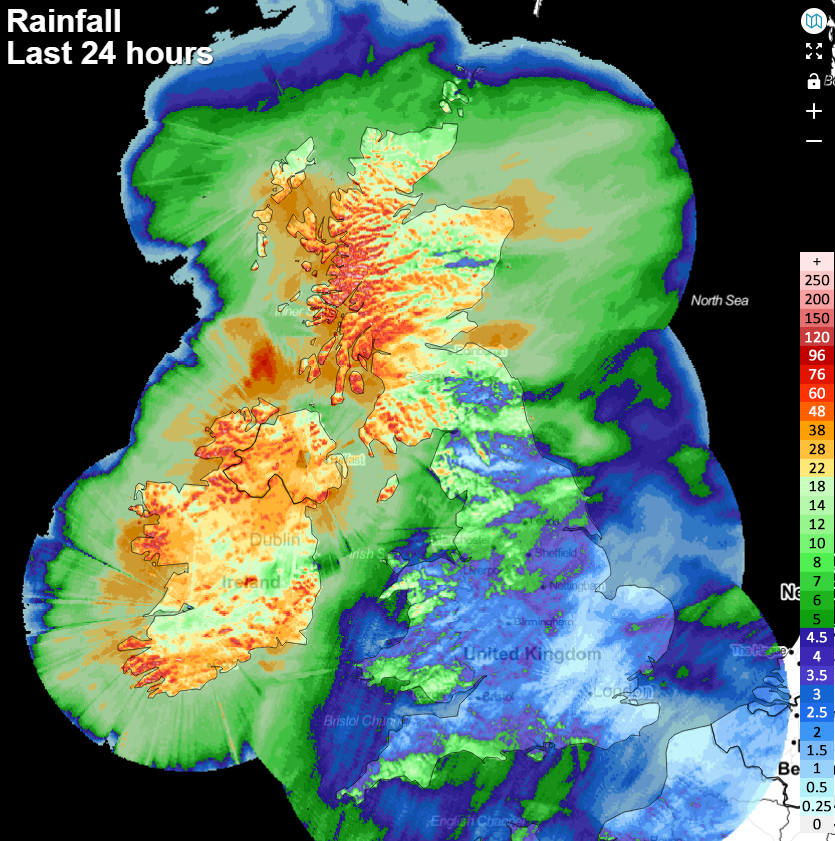 With low pressure on the scene, strong winds will also be something to keep an eye on - up from the southwest, through the Irish Channel and into western and northern Scotland today. And like the rain, the south of England comes into play during Wednesday, with southeastern England, in particular, liable to see some very gusty winds and gales (perhaps severe) during the day.

The two lows which will be bringing our weather during the next few days are interconnected. The main one will cross into Ireland today, before stalling and staying there into Wednesday. The second one (Storm Barbara), is currently just a small wave which is a developing secondary low that's spinning up to the south, moving near to Portugal, clipping Spain and then heading through into the Bay of Biscay and eventually towards southern and southeast England during Wednesday. 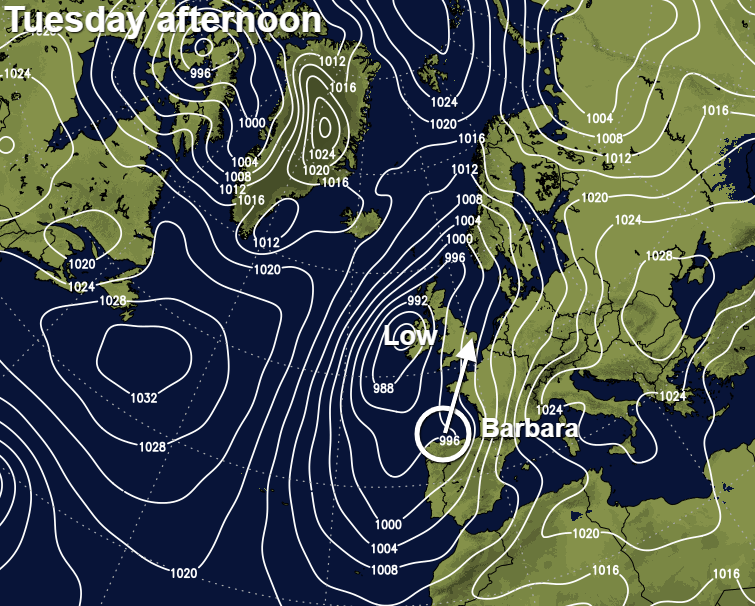 Currently, gusts of 50-65mph are possible in exposed, coastal spots in the southeast corner. But developing lows such as Storm Barbara can often be tricky to forecast, so although at this stage it doesn't look to bring anything too significant wind wise, there is the potential for that to change.

The rainfall totals over the next 24 hours don't make for especially pleasant reading for those in the northwest of the country. As having already been soaked to start the week, there's another 25mm plus to come in some parts. The rain will be more showery in nature today though, so not the constant deluge of yesterday. 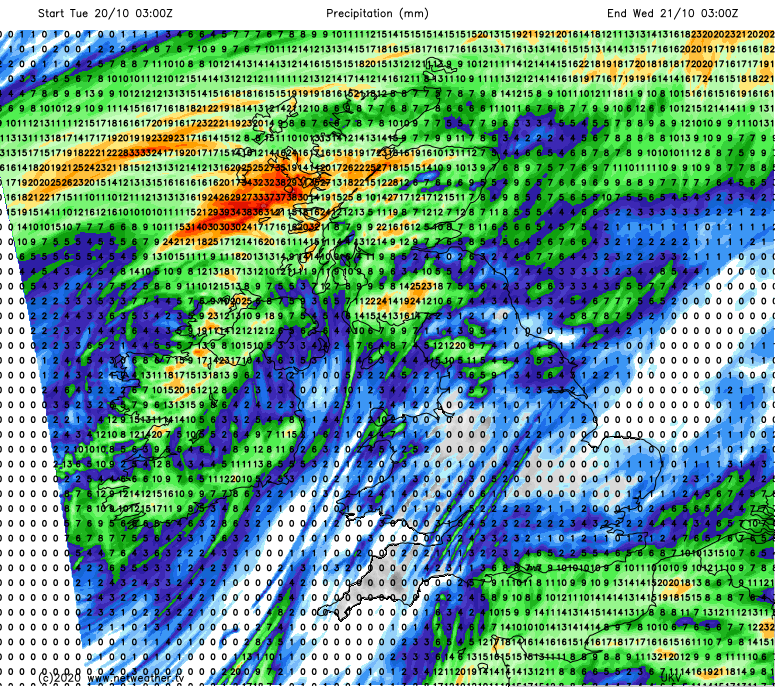 For the remainder of the country, central and eastern areas will stay mostly dry with perhaps the odd shower today. Others in the west will see a few more showers around, but you'll still be fairly unlucky to catch one. It'll be a mild day too, especially in England and Wales with highs reaching 15-18c. For Scotland and Northern Ireland, it'll be slightly cooler with maxes of 11-14c generally.

Overnight, rain will start to move up into southern England, heading quite quickly north to bring a west start to Wednesday for a good deal of southern and central England, along with East Anglia. Further north, there'll be some showery rain at times through into northern England and Scotland with some more persistent rain continuing to affect the far north of Scotland as well. The wet weather in both regions will tend to clear during the day though, but will be replaced by some showers moving in from the west.

For the top and tail of the country, it'll be a windy day with the strongest winds affecting the north of Scotland, western Ireland and southern England - especially the southeast. In between, it'll be a calmer day with much lighter winds. 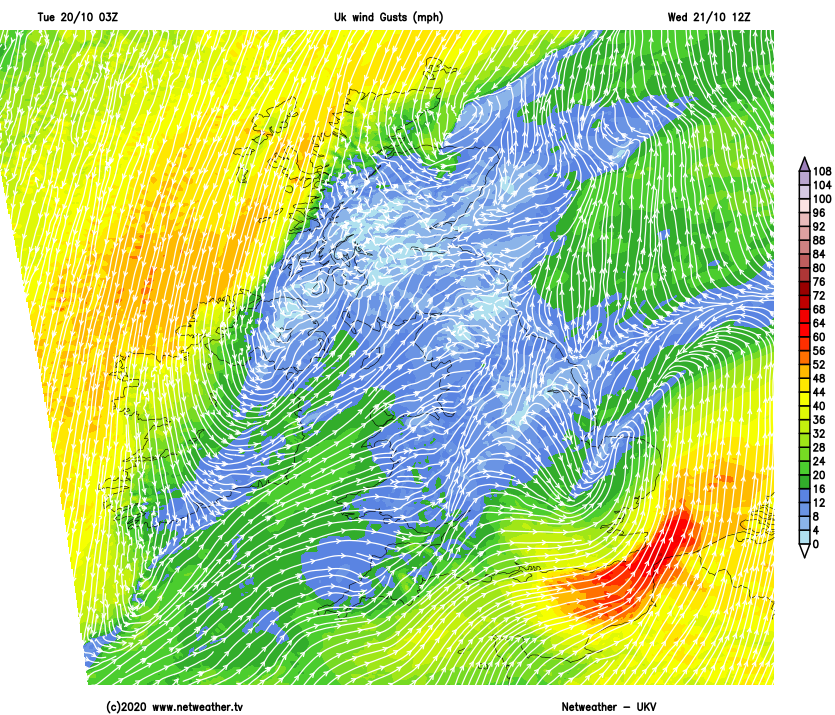 Looking further ahead, a brief ridge of high pressure should keep most places dry on Thursday with just a smattering of showers There'll be a split in temperatures across the country, with the south keeping milder air and highs nicely into the teens, whereas it'll be cooler further north with some parts struggling to make double figures.

The drier, calmer weather won't last, as the next spell of rain and blustery winds will move down from the northwest from late Thursday and into Friday, although the southeast quarter of the country may not see a great deal of rain from it. The unsettled theme will then continue into the weekend as well, with more showers or longer spells of rain moving through at times, and it'll often be windy too.