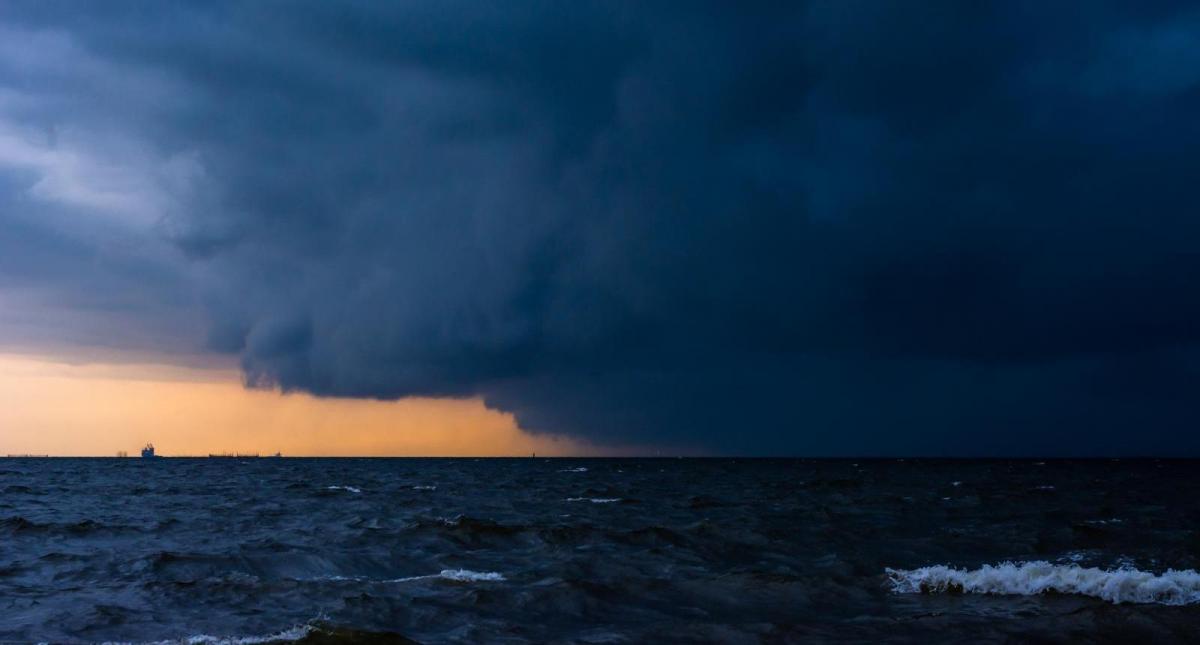 Atlantic taking control as the month ends and October starts

Recent weeks have seen plenty of sunshine and warmth across large areas of the UK, particularly England and Wales, while it has been rather dry this month across large parts of southern England, with very little rain. It was particularly warm early last week, as southerly winds off a hot near continent allowed temperatures to reach 31.3C at Frittenden in Kent last Tuesday, first time 30C has been exceeded in September since 2016.

The recent warm sunny days and light winds across large parts of the UK has been courtesy of high pressure close by. This was initially centred over the near continent early last week, dragging in hot air from the near continent, before eventually high pressure repositioned further north across northern Britain, with cooler air sweeping in from the northeast, so all though days were still warm in the sunshine, nights have been on the chilly side.

With high pressure sinking back south and the flow changing to a warmer southwesterly yesterday, temperatures reached 26C in East Anglia yesterday. However, a cold front clearing England through today is introducing a much cooler polar maritime airmass. And from today we are unlikely to see temperatures reach even 20C for most for the rest of the month, with highs reaching the mid to high teens at best in the south, the low to mid-teens in the north. 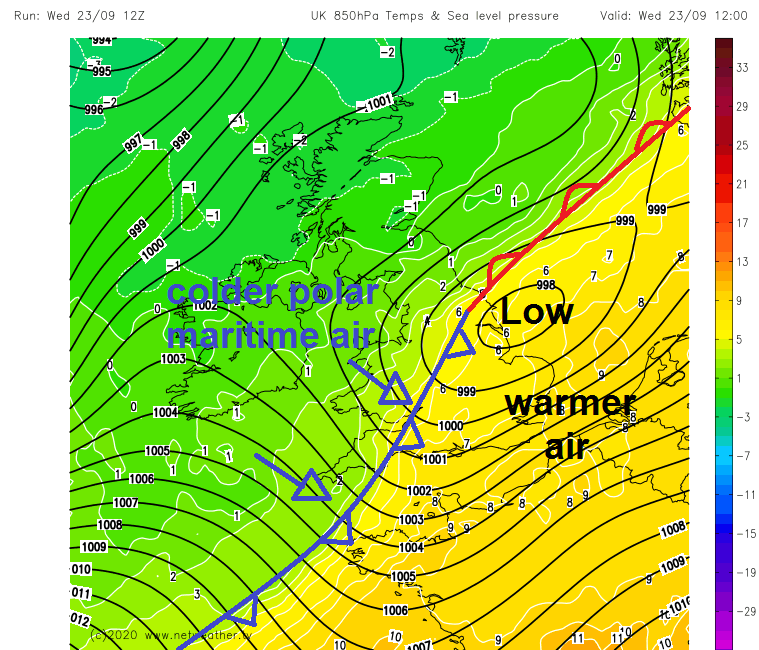 Part of the reason for the big change in weather away from high pressure domination to low pressure domination with lower temperatures is to do with changes in the jet stream over the Atlantic caused by Hurricane Teddy, which made landfall along Canada’s Atlantic coast and is now a post-tropical cyclone. 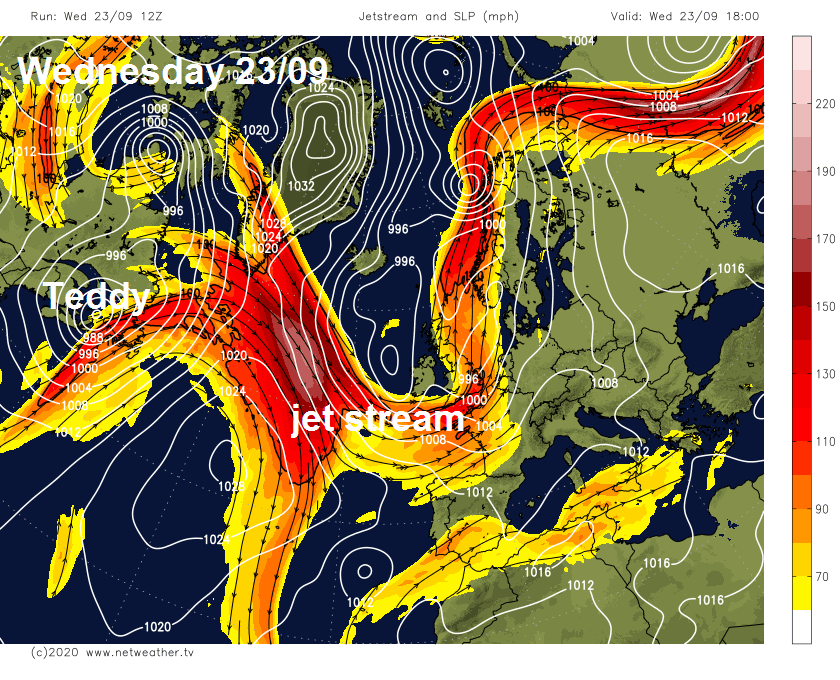 The hurricane caused the jet stream coming out of Canada and over the North Atlantic to strengthen, by pumping up warm tropical air against the cold polar air north of the jet stream. But also it has forced the jet stream to buckle, casing a ridge of high pressure to build north over the Atlantic – while carving out a trough of low pressure over NW Europe, including the UK and Ireland.

This trough of low pressure is likely to hang around for the final days of September, with the jet stream aimed at the UK or a little further south into France, bringing a succession of low pressure areas and frontal systems across the UK. Though it looks like we will have a respite over the weekend, as the jet stream weakens and a ridge of high pressure builds for a time, before another strengthening pulse in the jet pushes over the Atlantic through to the UK next week, bringing low pressure and a return to unsettled and windy conditions with bouts of rain or showers. 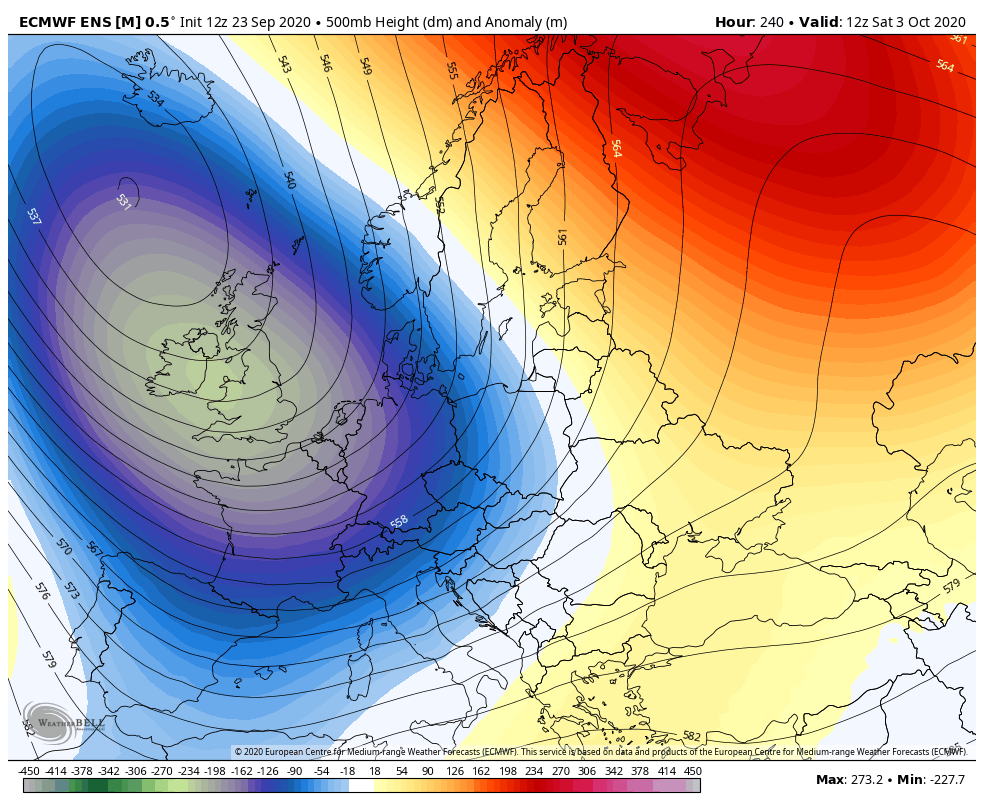 Looking at medium to longer range ensemble guidance, it looks like troughing / low pressure will be close to or over the UK as we enter early October too, so unsettled and sometimes windy conditions continuing.