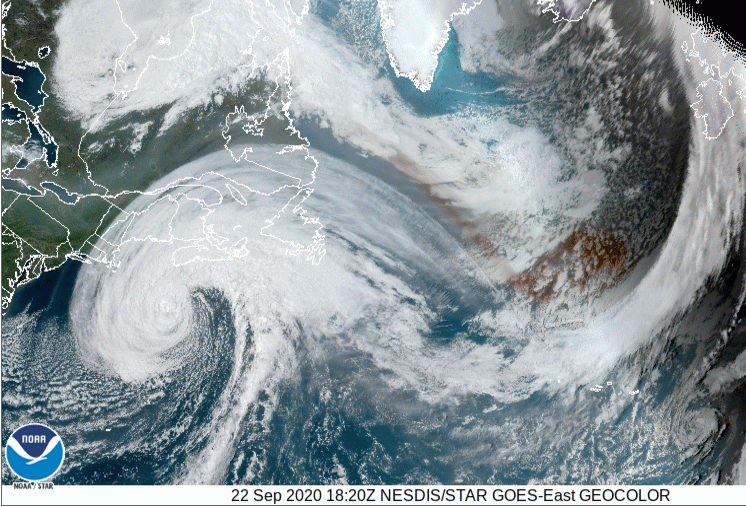 The people of Nova Scotia and Newfoundland are bracing themselves for incoming Teddy. With wet and very windy conditions but also wild seas for the Atlantic coasts, the Canadian Hurricane Centre (CHC) is issuing Tropical cyclone alerts for eastern Canada.

Hurricane Teddy gained Tropical Depression status on Sept 12th way further south in the Atlantic after forming off the coast of west Africa. It strengthened to a category 4 hurricane, swerved away from Bermuda and is now impacting Nova Scotia as a PTC, a post-tropical cyclone.

Weds 23rd update - Teddy is now a post-tropical cyclone, still a massive storm with destructive waves, massive wind area, high winds and heavy rain.  The NHC forecast indicates Teddy approaching the coast of Nova Scotia below hurricane strength, but still as a strong post-tropical extratropical low. Teddy should continue to gradually spin down as the cyclone moves north-northeastward toward Newfoundland. 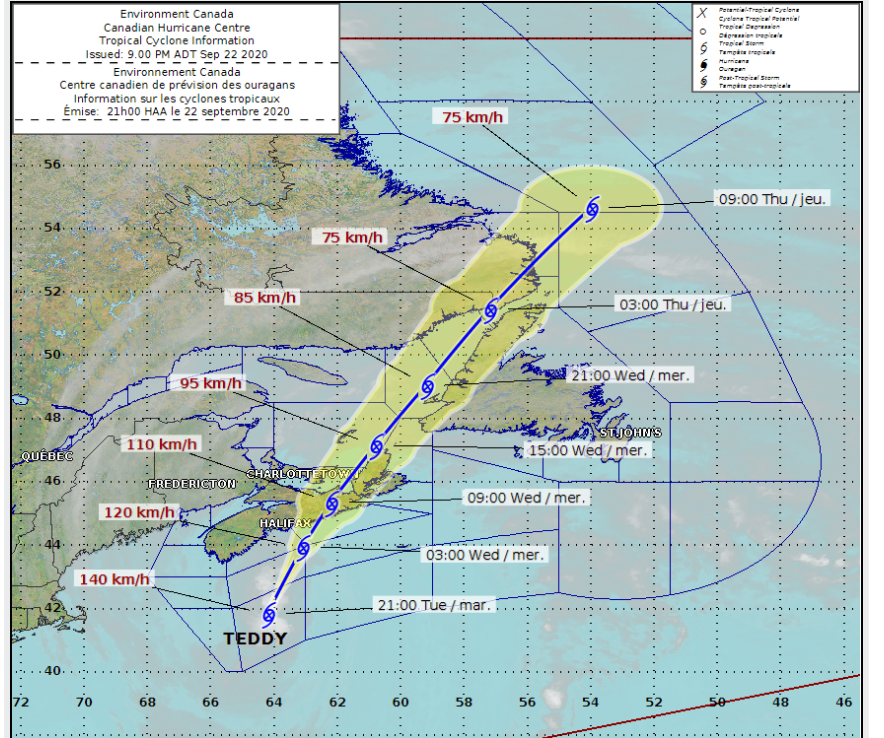 Tues 22nd - Hurricane Teddy is already bringing Tropical Storm force easterly winds to parts of Nova Scotia and flooding is being reported . Gusts over 70mph are expected in a second period of strong winds over eastern Nova Scotia Wednesday morning. It won't make landfall as a hurricane as Teddy is forecast to fully transition to a Post-Tropical Storm. Although it looked intriguingly close, the NHC say that "Teddy is in the late stages of extratropical transition." but still with a significant warm core and deep convection trying to re-develop on the no. 41 advisory. Whatever later investigations find, it will bring very heavy rain, gales and pounding surf to the Maritimes and southern Newfoundland. The centre of Post-Tropical Storm Teddy is expected to make landfall along the eastern shore of Nova Scotia Wednesday morning local time (four hours behind BST) then travel across eastern Nova Scotia before weakening as it moves into the Gulf of St. Lawrence.

NHC - Storm surge and very large breaking waves are the main concern and could pose a significant threat. The public should exercise extreme caution.  Marine warning -"Vessels should be exercising  extreme avoidance from Post-Tropical Cyclone Teddy.""

CHC “The baroclinic forcing and warmer SST's of the gulf stream will likely maintain Teddy's strength on Tuesday even as it continues to undergo extra-tropical transition. Thereafter, an increasingly strengthening shear environment and cooler SST's should complete the extra-tropical transition process by the time the centre makes its approach along the eastern shore of Nova Scotia. Thereafter Teddy is forecast to steadily weaken as it moves into the South-eastern Gulf of St. Lawrence and will eventually become completely absorbed by another trough east of Labrador on Thursday." 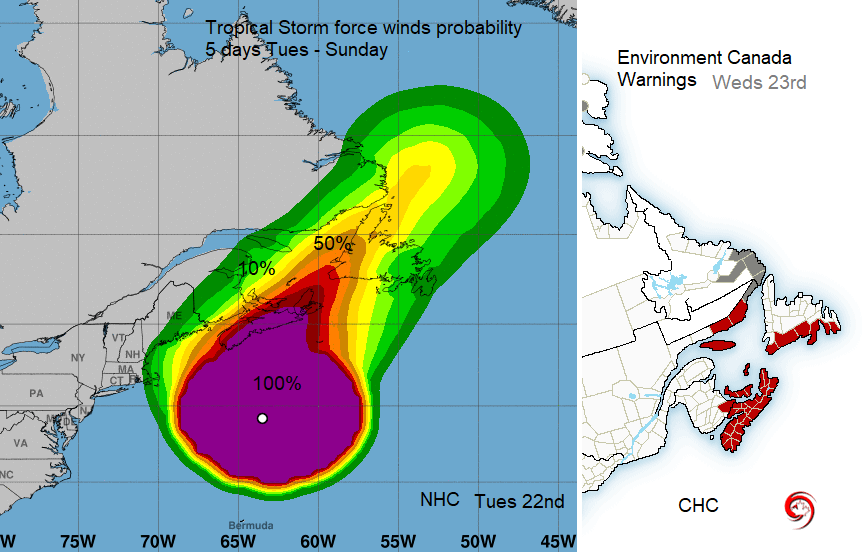 The CHC, Canadian Hurricane Centre was set up in 1987 after Hurricane Gloria in '85 moved from the US to Canada with all sorts of mixed messages and confusion in the media. Like the UKMO takes over land warnings from NHC, the CHC have warnings for Nova Scotia and Newfoundland.

Teddy is arriving nearly a year after Hurricane Dorian which devastated the Bahamas as a Cat 5 but ended up bringing torrential rain to eastern Canada. Teddy is not quite such a beast, although still displaying a 1000 mile wide circulation during transition. For the coastal communities, there will  be dangerous conditions mid-week with destructive waves being mentioned.  The tropical storm winds are likely to cause disruption. Trees are still in full leaf, bringing the risk of branches breaking and some tree falls, leading to power outages.

Rain- “From Tues through Thursday, Teddy is expected to produce rainfall accumulations of 2 to 4 inches (50 to 100 mm) with isolated totals of 6 inches (150 mm) across sections of Atlantic Canada.” NHC. For Nova Scotia from Environment Canada – “Rainfall amounts in these areas could exceed 50 mm, with isolated areas possibly reaching 75 to 100 mm.” so up to 4 inches of rain. 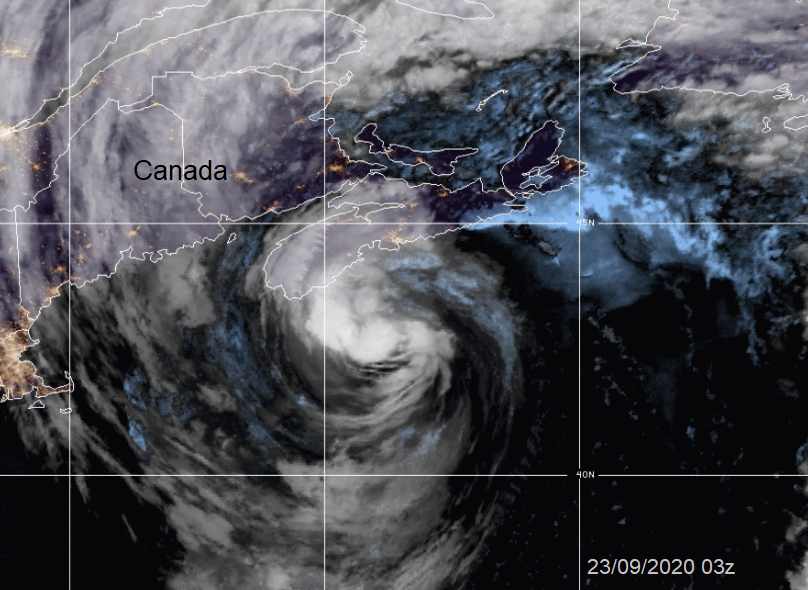 Tues 22nd - Tropical Storm Beta has moved from the Gulf of Mexico and made landfall over Texas with heavy rains forecast to continue as it moves inland. There is still a dangerous storm surge warning and large swell along with the high winds.

Paulette is back, south of the Azores. As a hurricane, it moved right across Bermuda on Monday 14th Sept and has transitioned into a post-tropical low but now regenerated into a Tropical Storm, not troubling anyone.

“Stay away from the shore - the combination of surge and large waves could result in dangerous rip currents and the risk of being pulled out to sea.” ECCC 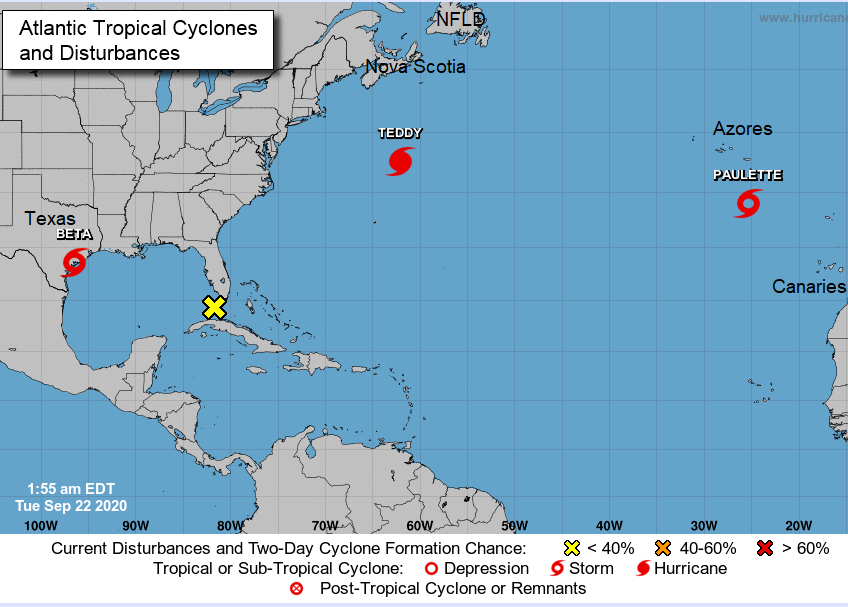