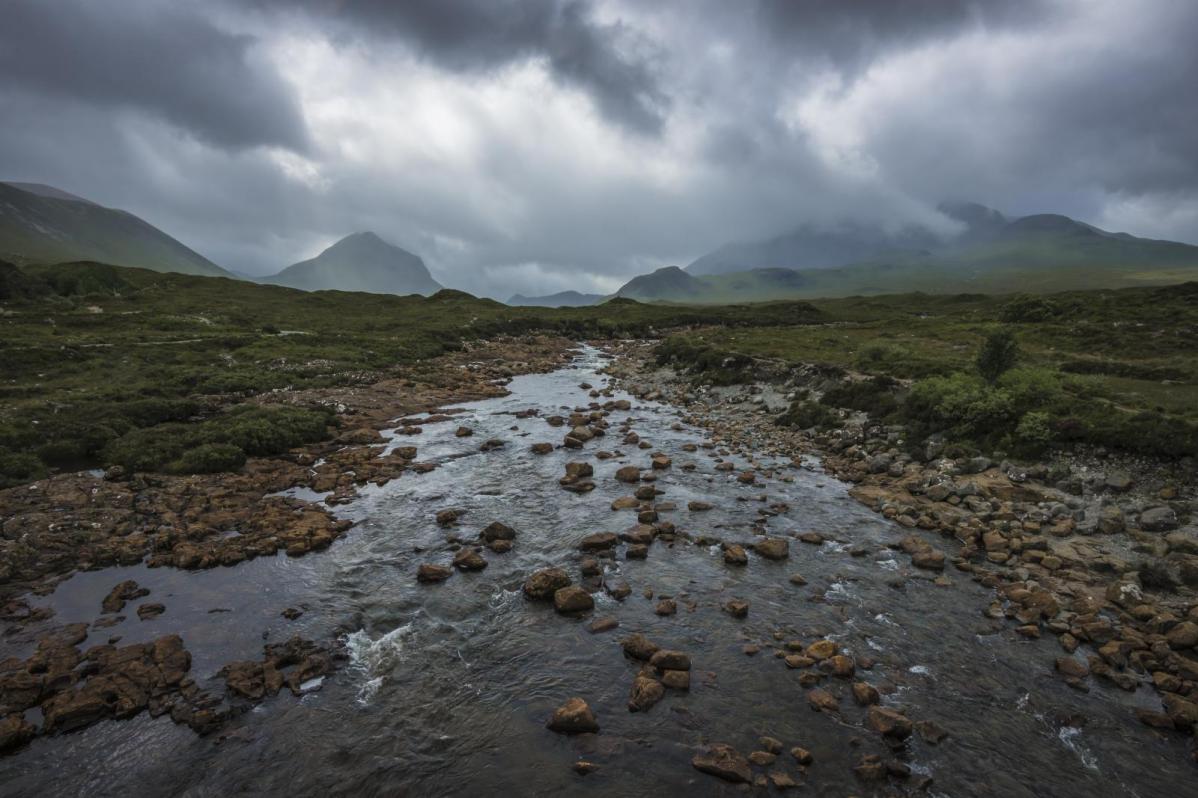 Oh great, mid-July drizzle - a bit more like Summer from tomorrow though

Weather is an odd thing, as when we talk about it being good or bad, that means different things to different people. Some people love hot weather, some hate it, some want sunshine all day in the summer, but someone working outside all day may prefer a bit more cloud, and that's before we get to the needs of farmers and growers who'd still probably like to see some more rain in the near future in at least parts of the country.

But, there's one weather type that's more universally disliked: drizzle. It's not wet enough to damp the soil and just makes a summer's day quite miserable and unusable. Unfortunately, that's what we're going to be seeing quite widely today under leaden grey skies for many. There will be some sunshine breaking through in the southeast to start, then other southern, especially southwestern parts southwest later on. There'll be more in the way of bright or sunny skies as we end the week with increasing temperatures too - more on this in a bit. 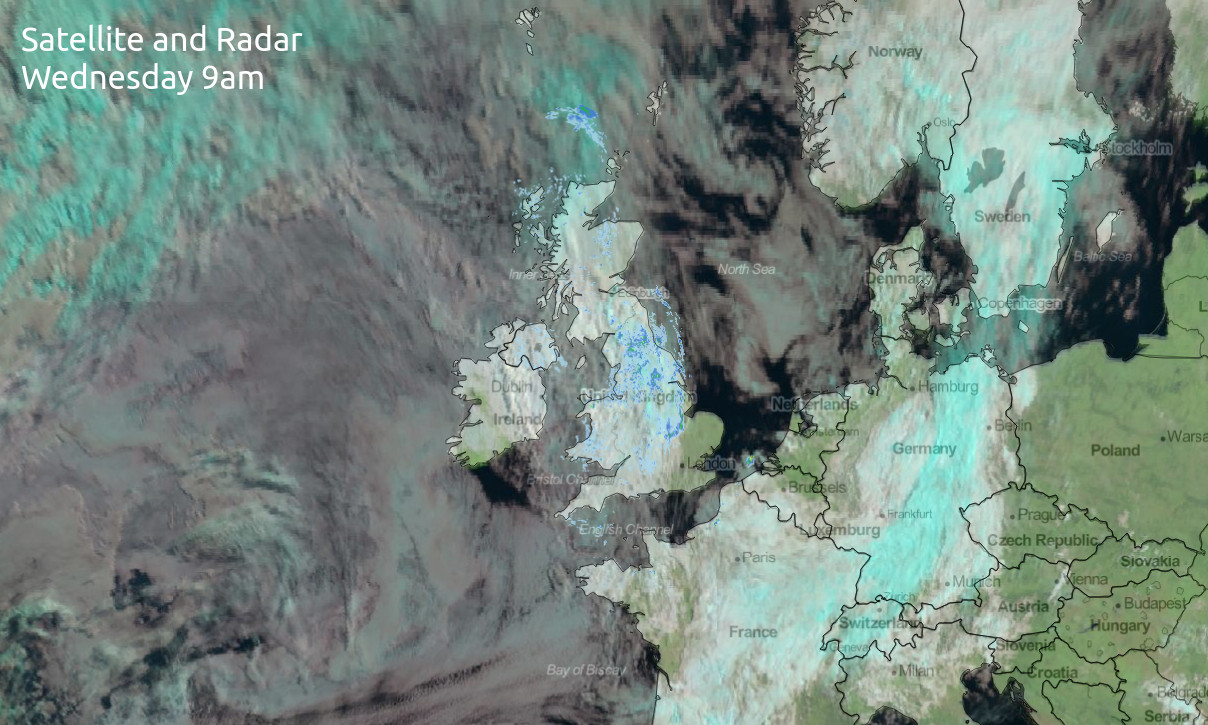 As you'd probably expect with a lot of cloud and drizzly bits of rain about, temperatures won't be flying upwards today. Maxes are likely to peak at 15-18c typically, although the southeast of Scotland may fare a little better with highs of 19c, maybe even a 20c here or there. The southeast of Ireland will do well as well, with more sunshine here, 21-24c will be the peak. 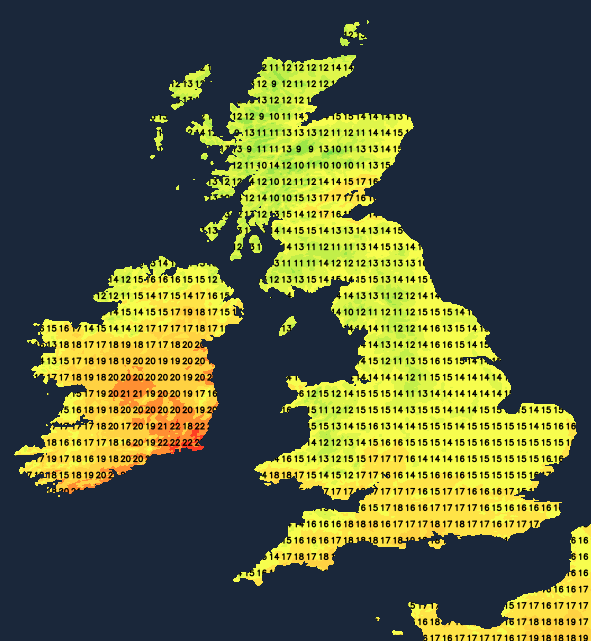 After a sunnier evening in the southwest, another mostly cloudy night follows with a few bits and pieces of drizzle continuing, along with some patchy 'real' rain in the far northwest of Scotland. Then into Thursday, it'll be a murky start for many with some drizzly rain here and there in the west. Even during the morning, there should be some sunshine to the east of high ground, and through the day, the cloud should further thin and break. The northwest of Scotland will be the exception to the rule though, with thicker cloud bringing outbreaks of rain at times throughout the day.

The sunnier spots will still be those regions with more shelter from the west, and it'll be here where it'll become a little bit warmer than we've seen in recent days. Maxes of 22-24c or so are likely in those sunnier areas, with the mid-high teens elsewhere. 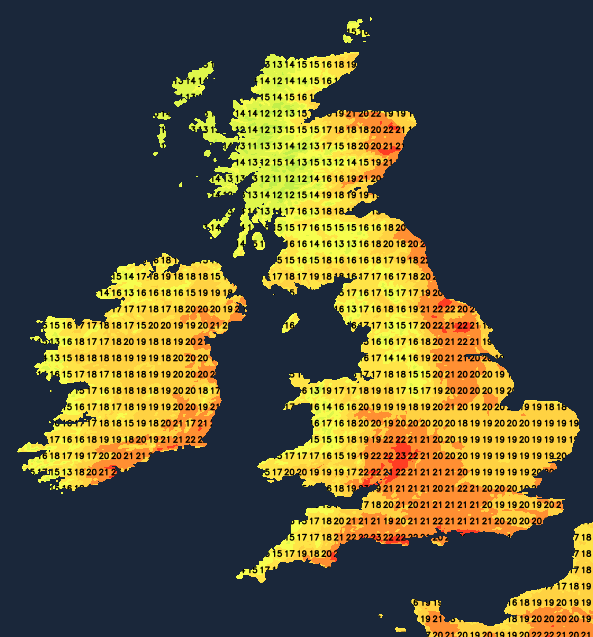 Friday is then set to bring a three-way split of weather. For central, southern and eastern England and Wales, there'll be plenty of sunshine and warm temperatures, rising up into the mid, even high-twenties. For south and central Scotland, Northern Ireland and the far north of England there'll be more and outbreaks of rain moving southeast through the day. To the north of that, the sun will be out, with a scattering of showers in the northwest brought in by a keen southwest wind. The best of the warmth will therefore be further east. 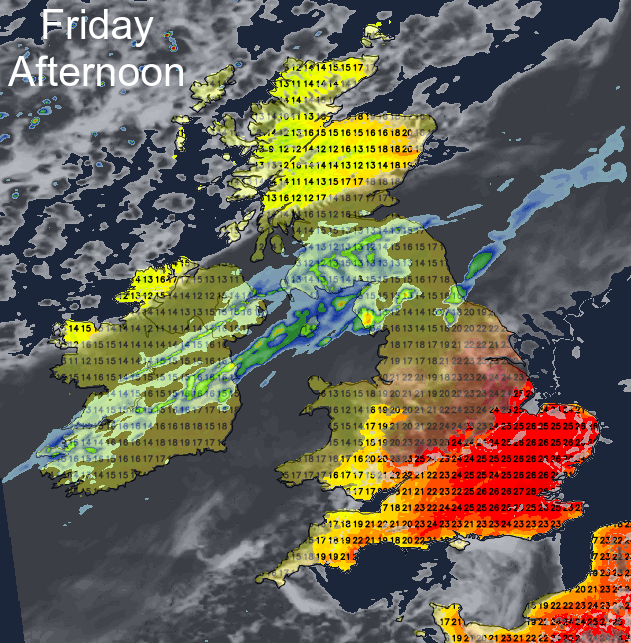 Into the weekend, the band of cloud and rain will continue to move southeast. It'll be a quite slow process, with the rain on Saturday tending to fade the further southeast it moves. The southeast of the country will keep some brightness and warmth through much of the day. And to the north of the band, there'll be sunny spells, some showers in the northwest and a fresher feel. There's the potential for the rain across southern and central regions to perk up with some heavy, thundery bursts into Sunday. It's not certain at this point but something to keep an eye on.