More murk, gloom and rain for now but sunnier skies return this weekend

There's more murky, drizzly and at times wet weather on the way for England and Wales during the remainder of this week, but we're on course for high pressure to arrive this weekend and settle things down. North of the border it's a different story, with less murk but still some showers around during the coming days. But the flip-side of that will be that the northwest of Scotland, in particular, is likely to see some rain during the weekend as the high struggles to hold Atlantic fronts at bay.

Today, much like yesterday we have fronts draped across England and Wales. For a good part of the day, the rain from them will be patchy and often light or drizzly. But from this afternoon onwards heavier bursts will move initially into Wales, before pushing their way further east across into much of England and perhaps also southern Scotland during the rest of the afternoon and into the evening. For the rest of Scotland, there'll be a scattering of showers around today, with the best of any bright or sunny spells in the northwest.

It'll be a muggy feeling day across England and Wales with maxes into the mid-high teens. A bit fresher for Scotland and Northern Ireland with highs reaching the mid-teens. Not exactly summerlike.

Thursday then brings a similarly dull, damp day for a good part of England and Wales - especially from the midlands south. Head further north, and there may be a few more glimpses of the sun, but at the same time, there'll be some sharp showers about, running east to west, with central and eastern Scotland liable to be particularly prone. Temperatures tomorrow will peak at 15-19c just about everywhere, and it'll still feel muggy in the south.

By Friday we'll see the murk finally clearing away, and with high pressure starting to ridge in from the southwest, any showers are likely to die away in Wales and southwest England quickly. Further east though, the picture won't be quite so benign with some heavy downpours moving through at times before they eventually die out during the evening. 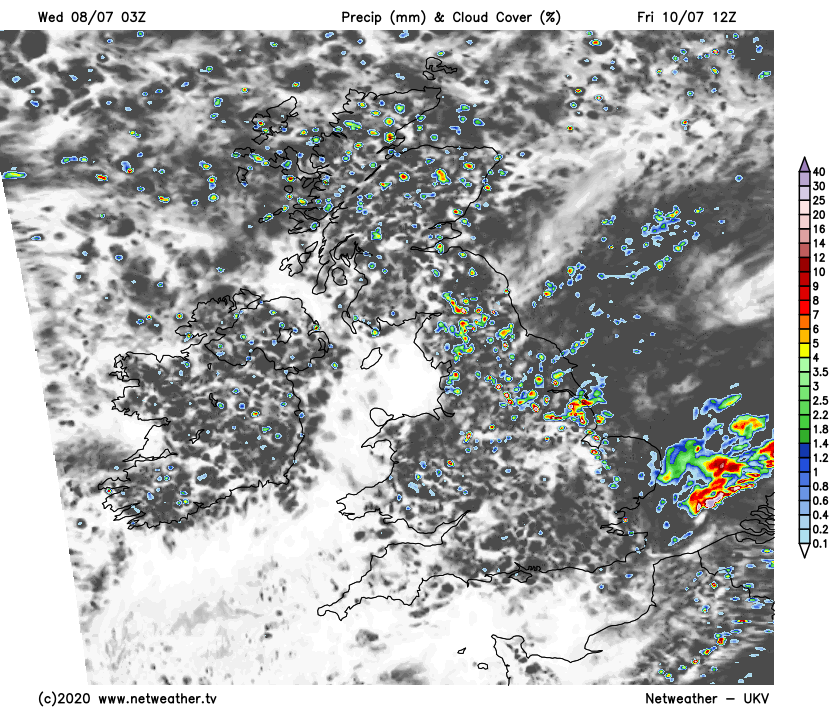 Even in the showery zones, there should still be some sunny spells to be had though, with temperatures starting to recover a touch and perhaps reaching into the low-twenties here or there.

The weekend then sees the high pressure extending its influence further northeast. On Saturday, there'll still be the potential for the odd shower in northwest England and Eastern Scotland, plus there'll be some patchy rain just grazing up close to the far north of Scotland. But elsewhere it'll be a fine and dry day with long sunny spells, just blocked out at times into the afternoon by some fair weather cumulus bubbling up. It'll be a warm day, but not hot with temperatures recovering up nearer to the average at this time of year - peaking at 18-22c in England and Wales, 15-18c in Scotland and Northern Ireland. 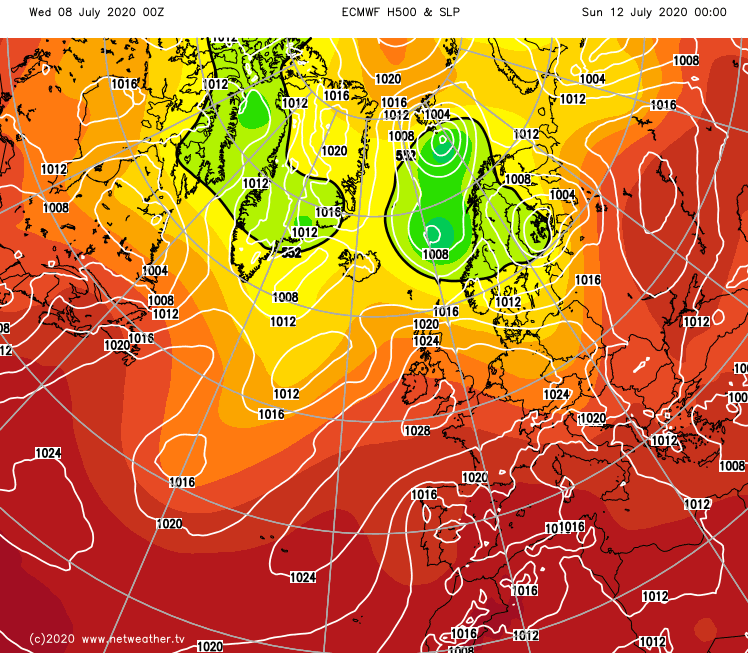 Sunday keeps the high in charge across much of the country, but some rain is likely to cross Ireland (North and South), and get into western Scotland, perhaps also Northwest England later. There is some uncertainty over all of this though, and it may be that the high keeps the rain at bay and squeezes it further north to affect just the northwest of Scotland. Away from that complication, there'll be more sunshine, and it'll be a touch warmer again with highs closing in on the mid-twenties in the southeast.