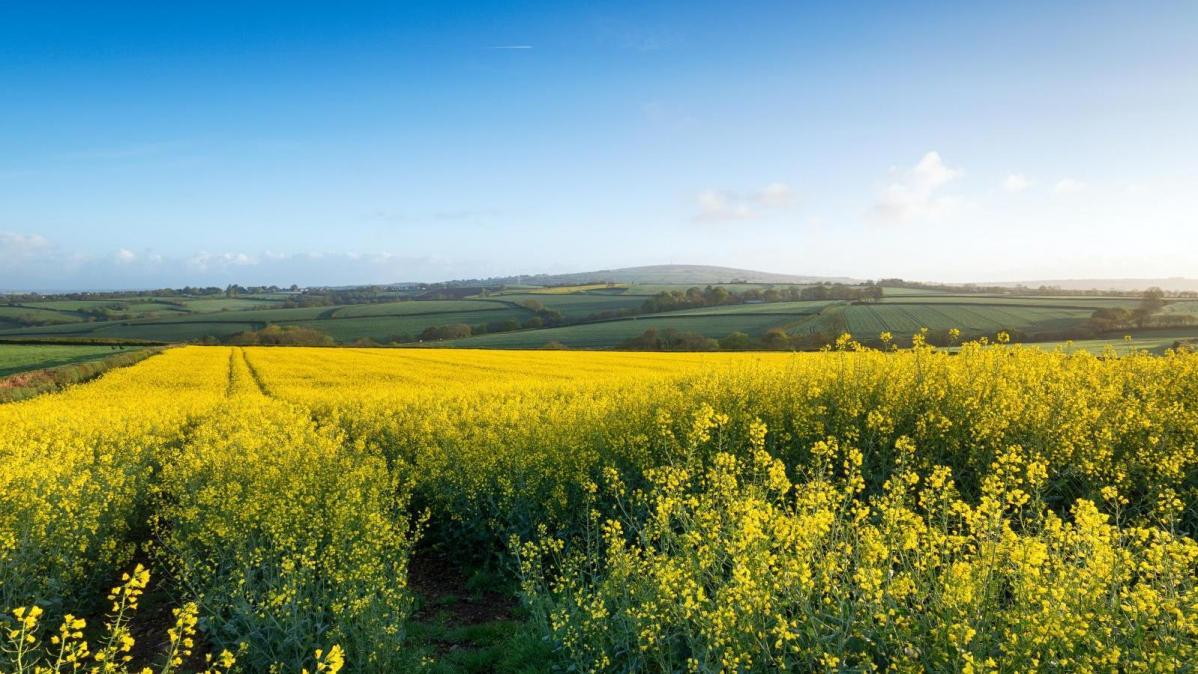 Wiggonholt in West Sussex reached 24.4C yesterday, making it the UK’s warmest day of the year so far. Today will see another fine and dry day across much of England and Wales – a few spots in the south could reach 25C, taking over yesterday’s place as the warmest day of the year so far. Scotland and N. Ireland will see more in the way with some showers today though. The fine, warm and sunny weather will hang on across the south through Saturday, with 25C possible, more changeable across the north, with showers early and late. However, a change come Easter Sunday across the south, as an area of low pressure moves in across the southwest, so it will be cooler with a  risk of heavy thundery showers developing, northern areas drier but cloudy and on the cool side. Easter Monday cooler still, as a brisk northeasterly wind develops off a still cold North Sea, it will be mostly dry and increasingly sunny from the north though, once early showery rain clears the far south.

For now, after early cloud or mist and fog lifts and clears, much of England and Wales will have another fine and dry day with plenty of sunshine developing. In the sunshine temperatures will rise to 25C inland across southern England and south Wales, elsewhere 19-23C. Noticeably warmer across NE England today with 19C compared to yesterday when cloud and onshore wind off the North Sea pegged the temperature back to 9C. The afternoon warmth could be enough to spark the  odd isolated sharp shower, most likely across North Wales and NW England, but you’ll be unlucky to catch one.. 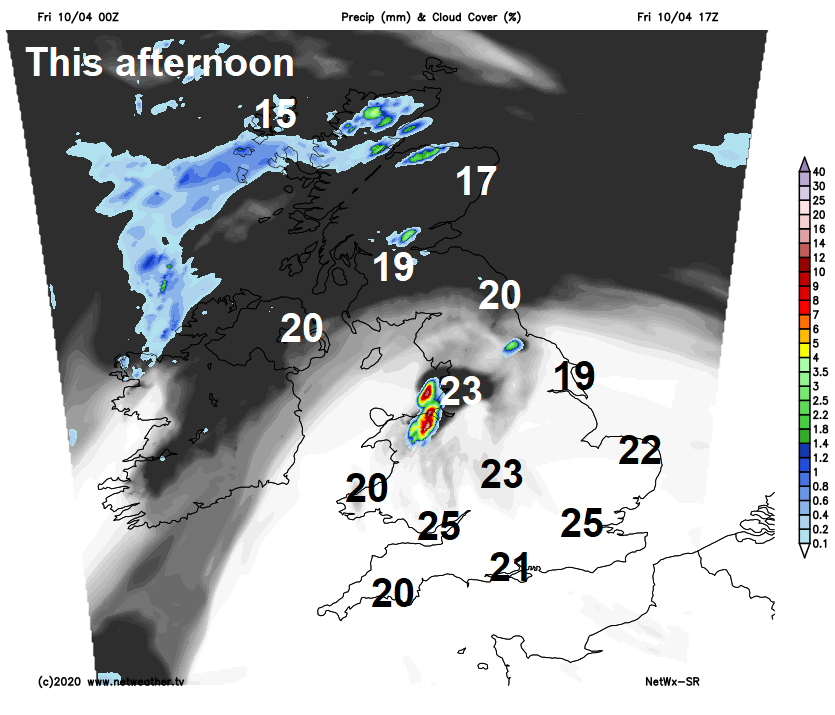 A cloudier morning across Scotland and N. Ireland, with some patchy light rain across western Scotland. Tending to brighten up and become sunnier though from the south by the afternoon across southern and central Scotland along with Northern Ireland – afternoon highs reaching 17-20C. Cloudier skies and patchy rain hanging on across the north of mainland Scotland, Northern and Western Isles – where it will be on the cool side with temperatures reaching 12-15C at best.

Much of England and Wales will have a dry and mild night with clear spells, though a few sharp showers possible over northern England overnight. A cold front pushing in from the west will bring thicker cloud and showery rain east across Scotland, N. Ireland and perhaps far north of England overnight.

Early cloud and showery rain clearing Scotland and NE England, then drier and increasingly sunnier for the north through the morning and into the afternoon, however another front will arrive from the west bringing thicker cloud and a band of rain across western Scotland and N. Ireland by early evening before turning showery as it moves further east. Afternoon highs reaching the mid to perhaps high teens. Southern areas again fine, warm and sunny for the most part, temperatures reaching 22-24C inland across central and eastern areas, cooler in the wet, perhaps 25-26C in the London area. Like today, cloud bubbling up across SW Englnd, Wales and perhaps NW England to bring a few isolated heavy and perhaps thundery showers. 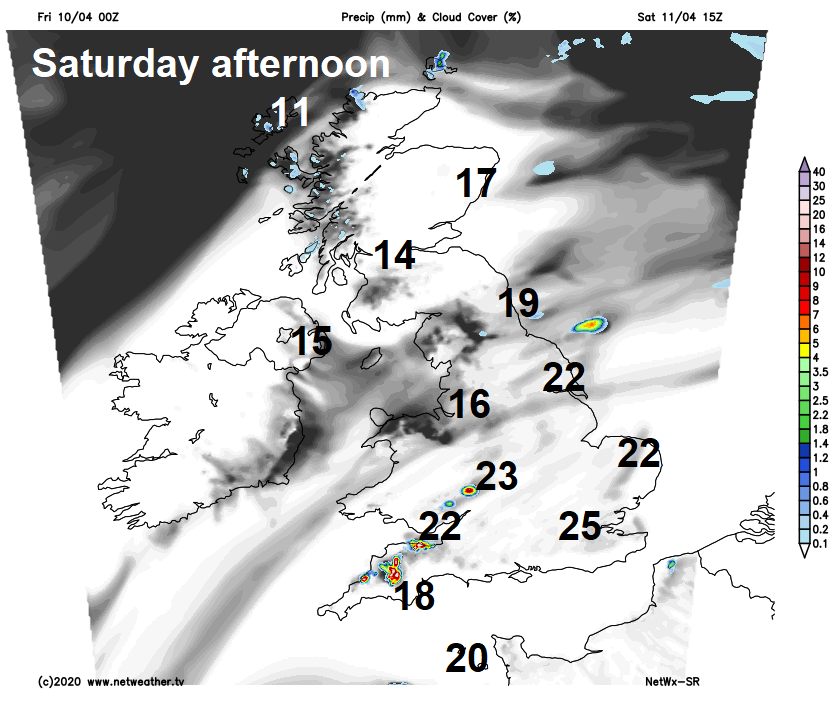 Easter Sunday will be cooler across all parts, low pressure moving in across the southwest will mean more in the way of cloud than recent days across the south, with scattered slow-moving heavy and thundery showers developing, though there will also be some sunny spells. Temperatures down on recent days, but still reaching the high teens or low twenties with some sunshine. Across the north, a fair bit of cloud moving down from the north, with some showers across northern Scotland and on the cool side in the northerly breeze, otherwise mostly dry with some sunny spells with shelter of higher ground across central and southern Scotland. Temperatures in the north reaching the low to mid teens.

Heavy thundery showers breaking out across the south Easter Sunday, cooler and drier conditions in the north - which will spread south Easter Monday as high pressure builds, but with a brisk northeasterly wind developing

Easter Monday may start with showers across the south, but these clearing through the morning to leave most places with a dry day with increasing amounts of sunshine moving down from the north - as high pressure builds, away from eastern coasts which will be cloudier. But a cold and brisk northeasterly wind across all parts will make it noticeably cooler than of late, with temperatures reaching only 10-14C across southern and western areas, cooler still across the north and east – with 7-9C.

The rest of next week is looking mostly dry and settled with high pressure in charge, though cooler than this week with the wind from the east. Uncertainty this far out, but perhaps an increasing risk of showers in the south later in the week.