Wednesday was the warmest day of the year so far, with 23.9C reached at Herstmonceux in East Sussex. Large parts of England and Wales were warm and sunny yesterday. Scotland has been cooler with cloudier skies and rain, the culprit, a slow-moving weather front, will continue to bring cloudier skies across Scotland and NE England today, but for the rest of England it will be generally sunny and warm again. Good Friday and Saturday will stay on the cloudy side for Scotland and N. Ireland with showers at times, but England and Wales will again be sunny and warm, perhaps reaching 25C (77F) in places, though there is a risk of isolated showers in places. Easter Sunday will turn cooler and cloudier everywhere, with a greater chance of showers. High pressure builds across the north on Easter Monday, with showers clearing the south, but a cold northeasterly wind developing bringing a chilly end to the long Easter Weekend.

For now, a fine morning across much of England and Wales with plenty of sunshine once any early mist and fog patches quickly burn off. Generally the day has started mild, but north of a slow-moving cold front bringing cloudier skies and patchy drizzle across Scotland and NE England it’s been a bright but frosty and frosty start across the far north of Scotland. 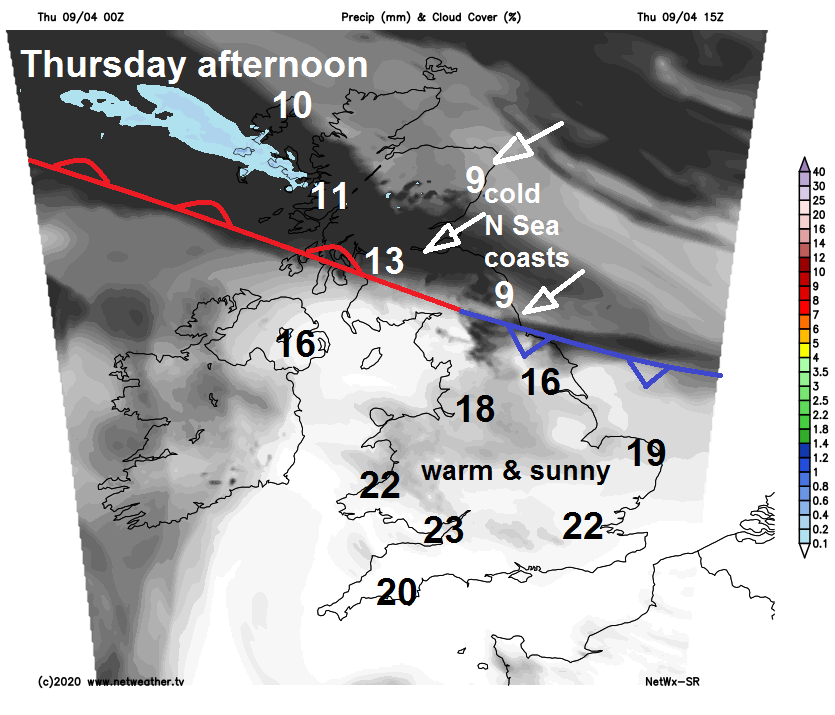 Cloudier skies with patchy drizzle or light rain only slowly drifting north across Scotland through the day, the far north of Scotland perhaps staying sunny but chillier here. NE England likely staying grey too, but for much of England, Wales and N. Ireland it will be another fine and warm day with sunny spells and variable cloud. Most prolonged spells of sunshine towards the south – where we’ll have the highest temperatures. Not as high as yesterday – but still reaching 20-22C inland across the south, 15-19C across the rest of England, Wales and N. Ireland away from North Sea coasts from the Wash northwards – where the breeze of the cold sea will peg back temperatures to 9-12C. Temperatures in the low teens at best across Scotland, perhaps struggling to 9C along North Sea coasts. 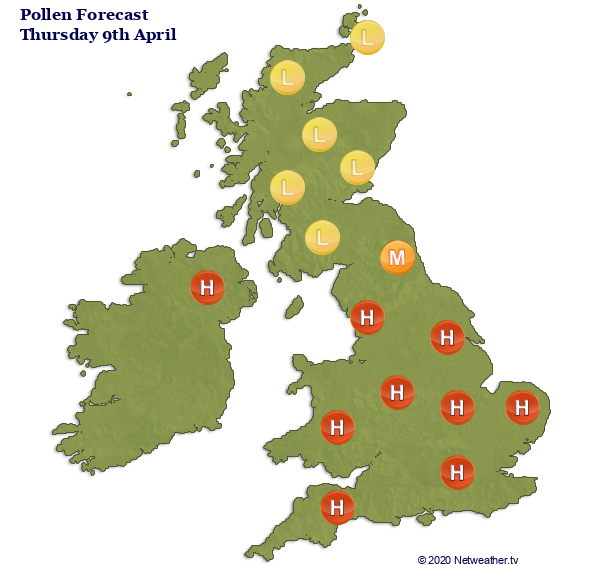 Staying generally cloudy across Scotland, N. Ireland and northern England overnight, patchy rain clipping the far northwest and Northern Isles while some scattered showers look to develop across southern Scotland N. Ireland and NW England in the early hours. Otherwise much of England and Wales will stay dry and mild with clear spells towards the south.

Friday another fine, sunny and warm day across much of England and Wales, sunnier and warmer too for eastern Scotland and NE England than today. There will be cloudier skies for western Scotland and N. Ireland, with scattered showers, a few of these showers making it towards the east of Scotland too. A few showers could develop across Wales too in the afternoon, but they’ll be hit and miss, with much of England and Wales remaining dry and becoming rather warm in the sunshine for early April – afternoon high reaching 22-24C across central and southern areas, 16-20C elsewhere. Scotland and N. Ireland reaching 12-16C. 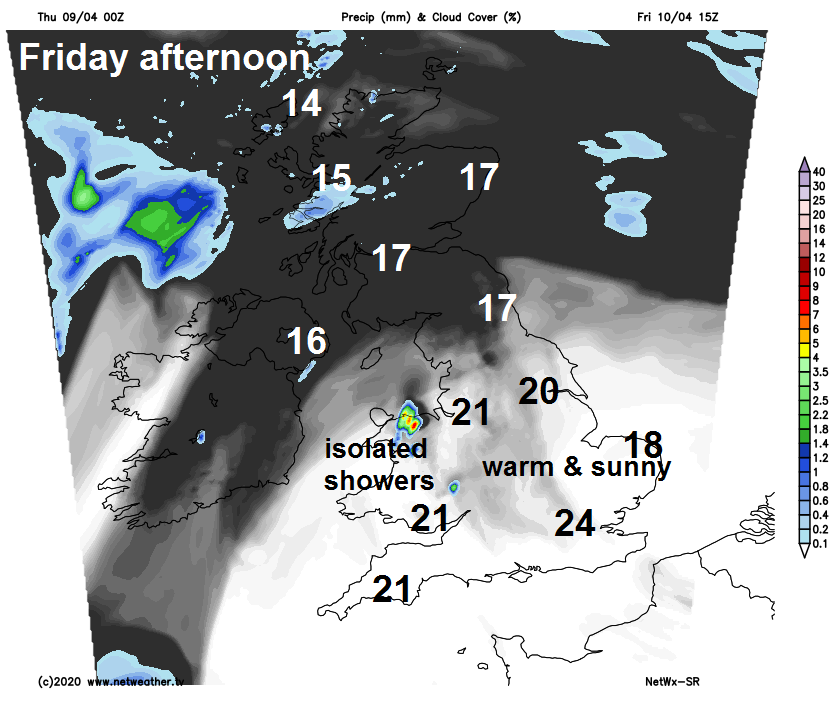 The fine, sunny and warm weather hanging on across much of England and Wales on Saturday, staying generally dry, just the odd isolated shower in the west, with temperatures reaching 18-23C, cooler around coasts. Cloudier with scattered showers across Scotland and N. Ireland, as weather fronts move in from the west – cooler too with temperatures reaching 11-15C generally, though eastern Scotland could reach high teens in any sunshine.

Not as warm across England and Wales on Easter Sunday, with more in the way of cloud and a greater chance of showers breaking out – which could be heavy and thundery across Wales, central and southern England. Northern England, Scotland and N. Ireland generally dry with some sunny spells but also a few showers possible. Temperatures reaching 16-19C across Midlands, south Wales, southern and eastern England – high teens is still above average for early April, 10-15C elsewhere.

Turning cooler still as we head into Easter Monday, any showers across southern England first thing should clear away as high pressure builds across the north, then for most it will be dry and bright or sunny but with a strengthening chilly northeasterly wind.