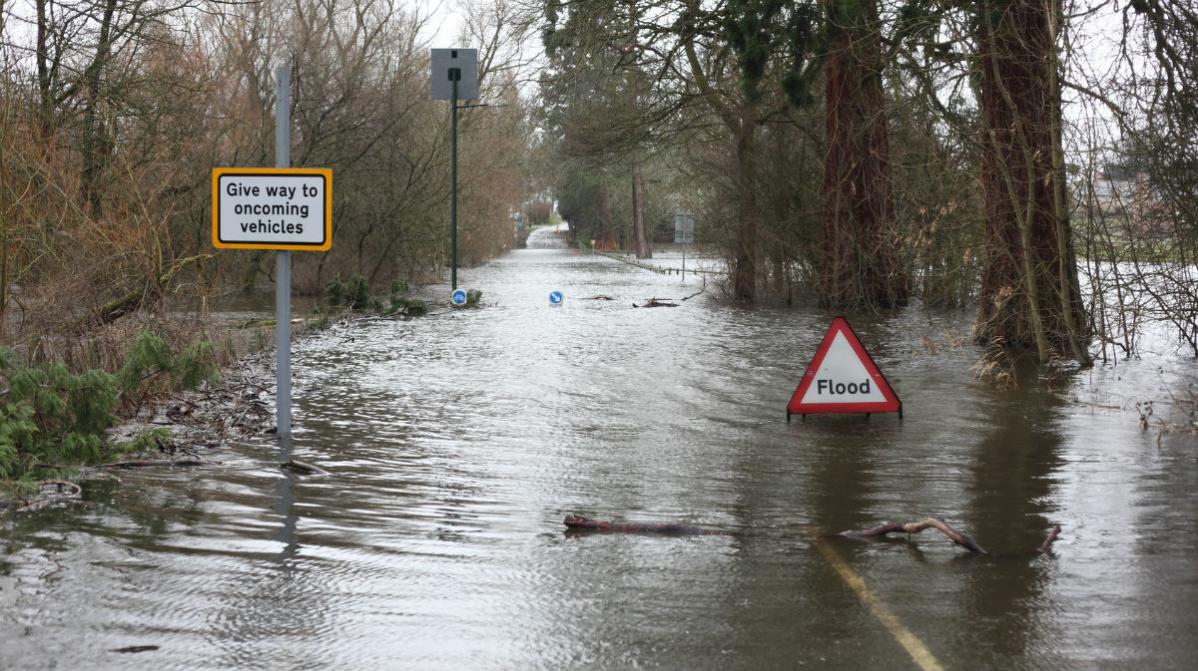 As we close the last few days of meteorological winter, some parts of the south saw their first snow of this winter falling and even settling on Thursday morning. However, like much of February, the weather story over the next few days will be the concern of further rain to come, exacerbated by the arrival of Storm Jorge by over the weekend. Much of the British Isles is covered by weather warnings for rain and wind over the next few days. Probably the last thing many want to hear, especially for those have been impacted by record flooding across the west, with the flooding risk likely to be ongoing as more rain is expected to fall into the catchments of areas hit by flooding. There is still one Severe Flood Warning on the River Severn at Ironbridge in Shropshire, with a further 75 Flood Warnings across England and one in Wales. 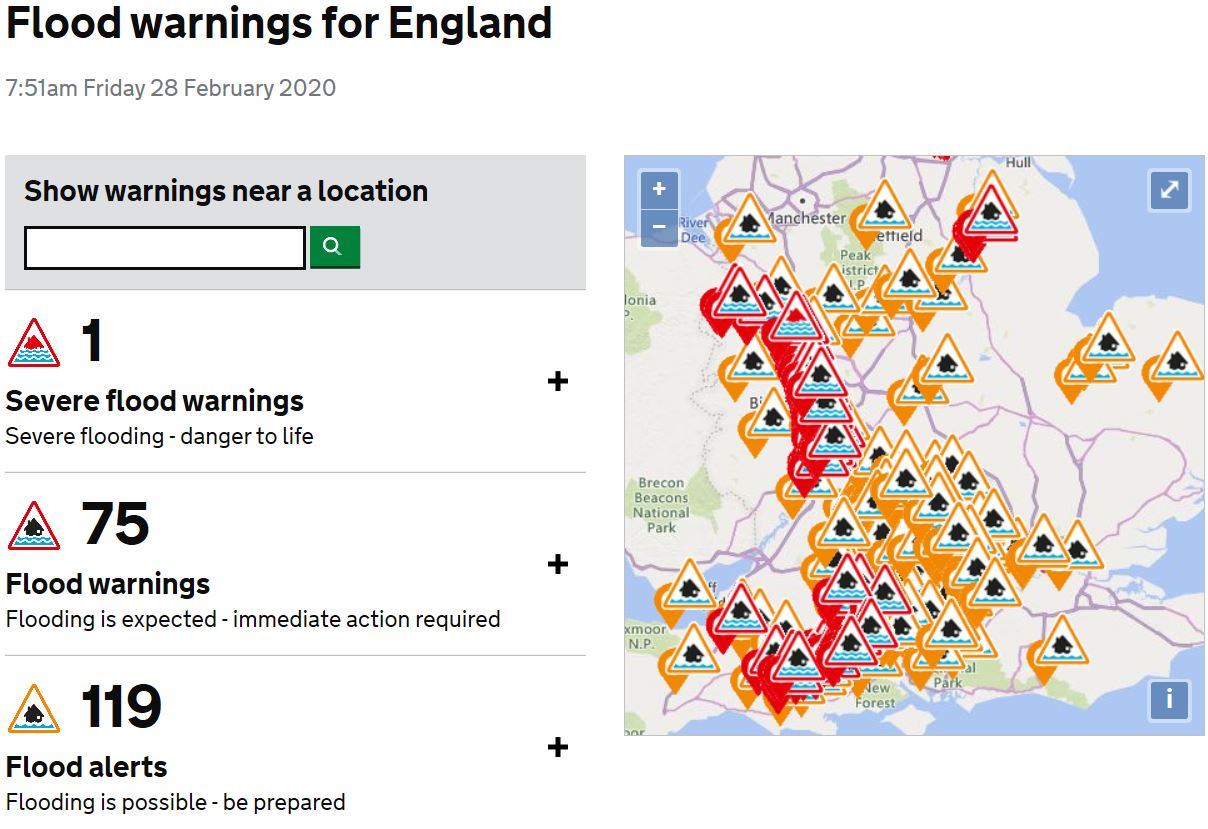 Ahead of Storm Jorge arriving tomorrow, an Atlantic frontal system moving up from the southwest will bring a day of rain and northern hill snow today. Another spell of heavy rain will push east across the UK on Saturday morning clearing to sunshine and showers while becoming increasingly windy with gales as Storm Jorge, named by the Spanish Meteorological Service (AEMet) yesterday, tracks close to Ireland. Remaining windy on Sunday with sunshine and blustery showers. Unsettled and often cold conditions continuing through next week too, with showers or longer spells of rain and strong winds, cold enough in the north for snow at times, especially over hills. 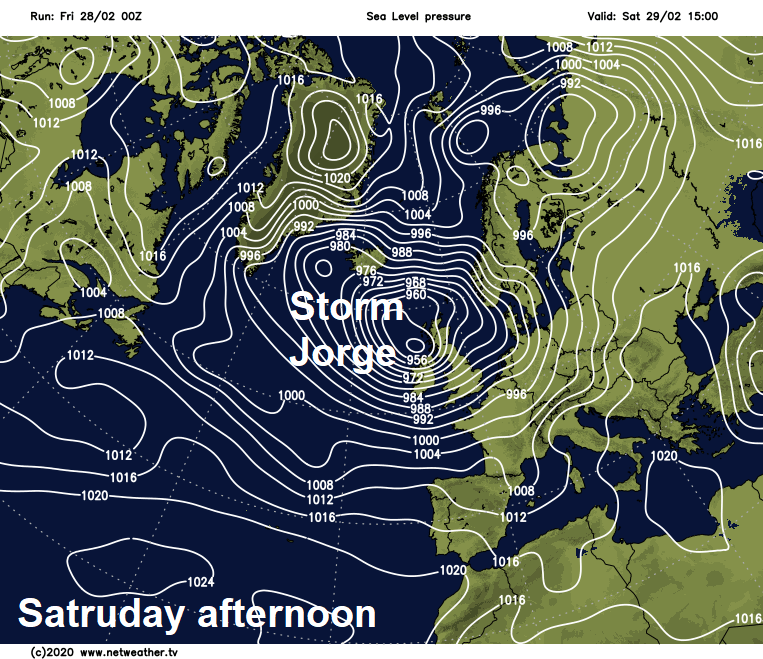 For now, after a rather chilly start first thing across eastern areas, with clear skies overnight allowing a frost in places, cloud and outbreaks of rain already across the west, preceded by snow across higher ground, will quickly spread northeast across southern Scotland and eastern areas of England too through the morning. Snow over higher ground of Wales and northern England this morning will be transient, as milder air moves in from the west. Once the rain arrives it will remain cloudy with outbreaks of rain on and off for much of the day for many areas, falling as snow across higher ground of the far north of England and Scotland though, as colder air hangs on here. The far north of Scotland could stay dry and bright though.

There are yellow warnings for rain covering Wales, Northern Ireland, northern and SW England – where rain will be heaviest and most persistent – with 60-80mm possible over the highest ground. This falling on already saturated ground and flowing into rivers already at high levels will likely lead to further flooding, with more rain tomorrow too.

Cold air hanging on across Scotland and the far north of England – where temperatures will reach 4-6C at best. But further south it will turn milder, with afternoon highs reaching 8-12C.

Rain easing across eastern areas of England this evening and becoming drier here but remaining cloudy overnight, rain lingering across more northern and western areas, where it will turn heavy and persistent and becoming windy too in the early hours. A mild night away from the far north.

A spell of heavy rain and gusty winds will quickly spread eastwards across all parts during Saturday morning, clearing eastern England by mid-morning, followed by brighter, colder, showery but increasingly very windy conditions from the west, as isobars tighten with Storm Jorge brushing past Northern Ireland before reaching western Scotland in the evening. Yellow Wind warnings are in place for Northern Ireland, southern Scotland, Wales and much of England, with gusts of 50-60 mph likely quite widely, perhaps 60-70 mph in coastal areas. The strongest winds associated with Jorge will likely affect the Republic of Ireland.

Besides gales developing through the morning, sunshine and blustery showers for many following the morning rain clearing the east, showers turning increasingly wintry in the north and west as cold polar air gets pulled in by Jorge, with snow over higher ground, perhaps increasingly to lower levels across the north, showers merging at times in the north with blizzard conditions possible over northern hills. Temperatures reaching 4-6C at best across Scotland, N. Ireland and far north of England, feeling bitter in the strong wind, further south across England and Wales reaching 6-8C. 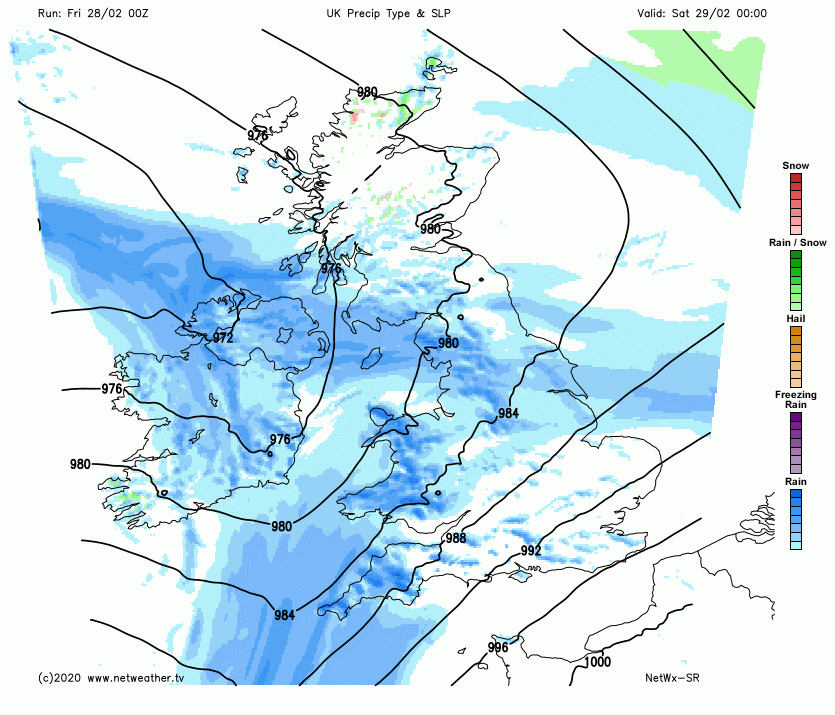 Remaining very windy on Sunday, with gales, strongest winds across the north, as the centre of Storm Jorge loiters close to northern Scotland. It will be chilly in the strong westerly wind, with a mixture of sunny spells and blustery showers – which will be wintry over higher ground in the north, showers merging into longer spells of rain, sleet and hill snow across Scotland rotating around the centre of Jorge. Feeling chilly in the strong wind, temperatures reaching 6-8C in the north, 8-9C in the south.

Monday will be bright but still windy for most, blustery showers in the north and west, wintry over hills, drier with the best of the sunshine towards the southeast after some showery rain clears first thing. Tuesday and Wednesday staying breezy but mostly dry and bright across the south, sunshine and showers across the north, chance though of some rain across southern counties on Wednesday.