You know it's been an iffy winter so far when a few sunny days and overnight frosts feel like an unusual relief. The high which brought that is still with us (for now), but with a load of moisture and murk trapped underneath it, sunshine is at much more of a premium.

By the weekend, the high is going to be starting to ease away, culminating in a band of rain moving west to east on Sunday, and there's also the potential for some stormy weather on Monday, which is something to keep a close eye on. There's a lot of uncertainty at this stage, with the GFS (below) showing the stormiest conditions right now, other models aren't quite so keen to intensify the low as much at the moment. 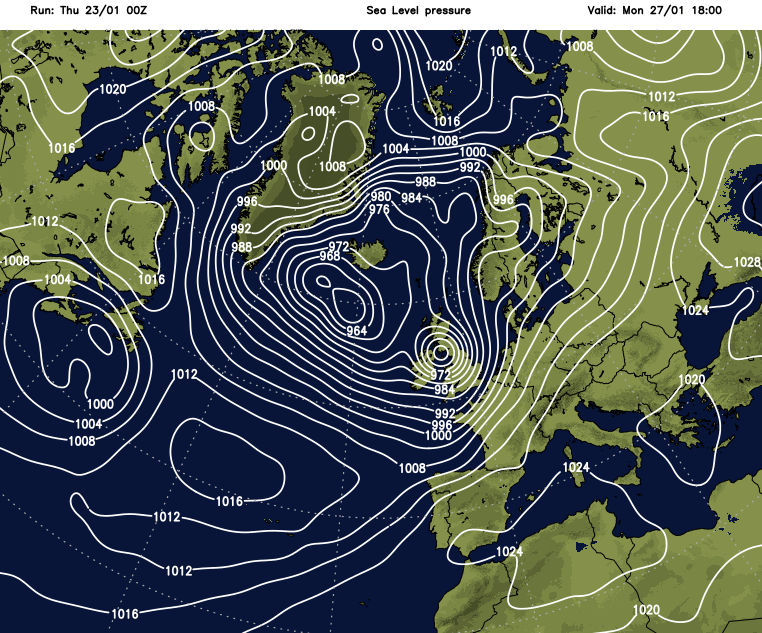 For now, we keep calm weather coming. The best chance of breaks in the cloud will be to the east of high ground and through southern coastal counties today. For most though, it'll stay dull with the cloud thick enough in places to bring some drizzly rain. The far north of Scotland will also see some showery rain moving in during the day, spreading a little way south - especially in western parts.  Temperatures will be a pretty uniform 7-10c.

After a mostly frost-free night, Friday then brings a very similar type of day. There'll be lots of cloud, some drizzly, showery bits of rain, most noticeably in western Scotland and temperatures will about be on a par with today.

Jet Stream on the move this weekend

The jet starts the upcoming weekend to the north of the British Isles, but by Sunday it's right across the country once again, signalling the return to low pressure dominated and unsettled weather.

On Saturday, not a great deal changes, though. There may even be a few more breaks in the cloud over England and Wales. There may also be one or two showers breaking out in western parts though, and a band of rain will edge into the west of Ireland and the far northwest of Scotland during the day.  Southwesterly winds will also freshen in the north and west, with a southerly wind also picking across the south of the UK.

Sunday brings a noticeable change though as that band of rain in the west, heads quite erratically east. There'll be some heavier bursts on it, but it will often be showery and is unlikely to reach the southeast corner until later in the day. The wind will be blustery as it moves through, coming up from the southwest ahead of and during the rain, but then switching more into the west behind it.

The change in wind direction also brings a shift to a cooler, fresher but at least clearer air mass - so some sunshine is likely for parts of Ireland (north and south), along with northern and central Scotland by the end of the day. There are likely to be more showers or longer spells of rain coming through from the west behind that clearer slot though, reaching into western Britain after dark and spreading east overnight.

Then into Monday, we'll be watching to see what this potentially stormy low does. At the moment, with so much uncertainty over its development, and should it develop, it's track and intensity there's little point in going into too much detail. But there is the risk of some very strong winds and a spell of heavy rain. The forecast for it should start to firm up over the next few days, so keep an eye out for updates for the latest. You can also keep track of things on your local weather forecast - it's now updated 12 times a day, so it has the very latest picture using a blend of models, including the hi-res UKV from the Met Office.