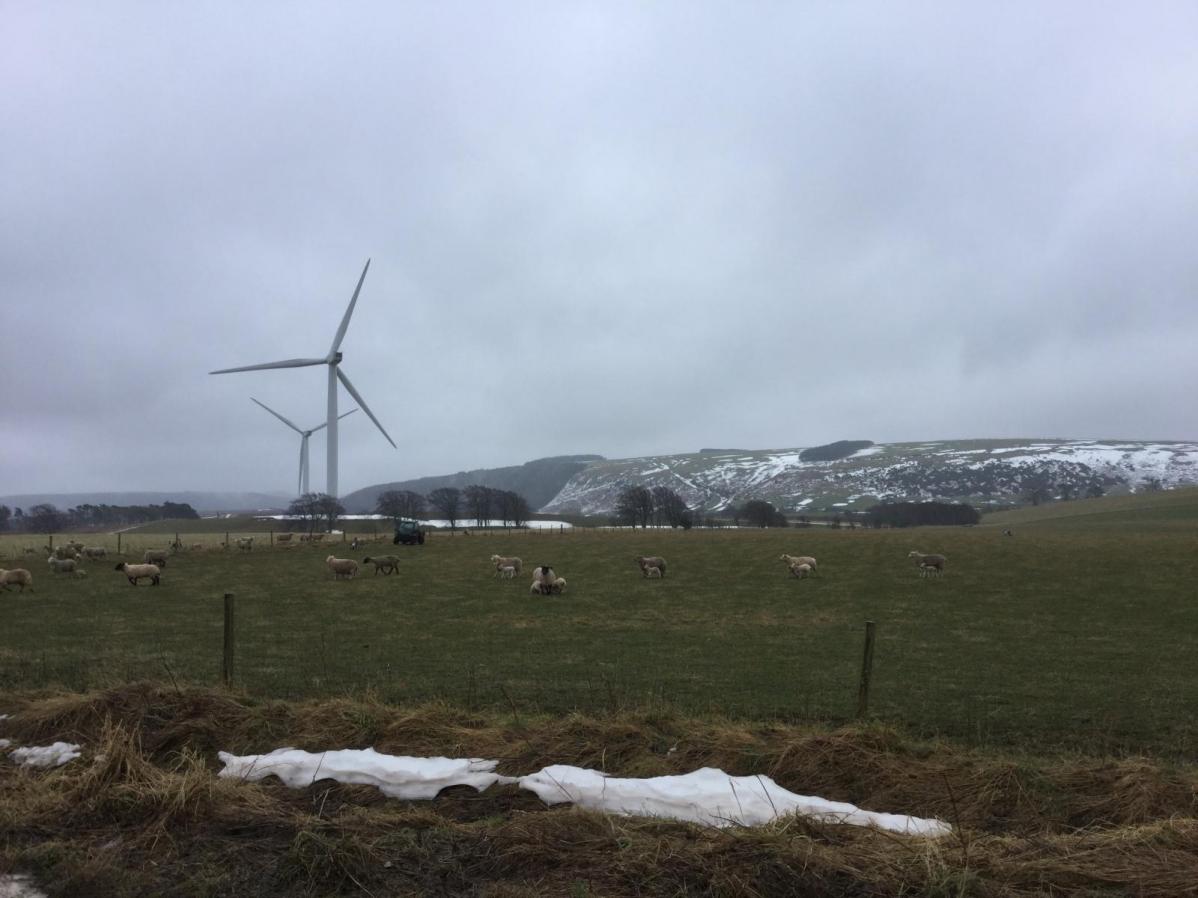 As Storm Brendan lurks, a new Low brings more rain and gusts. Changes for next week.

Storm Brendan certainly made its mark to start the week with more low pressures to follow in the coming days. For many on Monday, it was the frontal band passing that got attention. Bringing a spell of rain with a finale of intense rainfall and squally winds as dramatic line convection moved through before the weather suddenly cleared up. For Northern Ireland and Scotland, there was a longer period of wind and rain with gales for exposed coasts and hills, high gusts and driving rain. With high tides and large waves, the storm surge had led to coastal flood alerts along many coasts with warnings still in place this morning.

The storm centre is still lurking away to the north, two parts dumb-belling around keeping Brendan near to the Faroe Islands and continuing the strong winds for NW Scotland today. It’s also throwing in sleet and snow showers for Scotland from the northwest with a few over Northern Ireland, even Cumbria this morning. The Met Office has a wind warning for NW Scotland today and a Snow & Ice warning for inland Scotland until lunchtime. 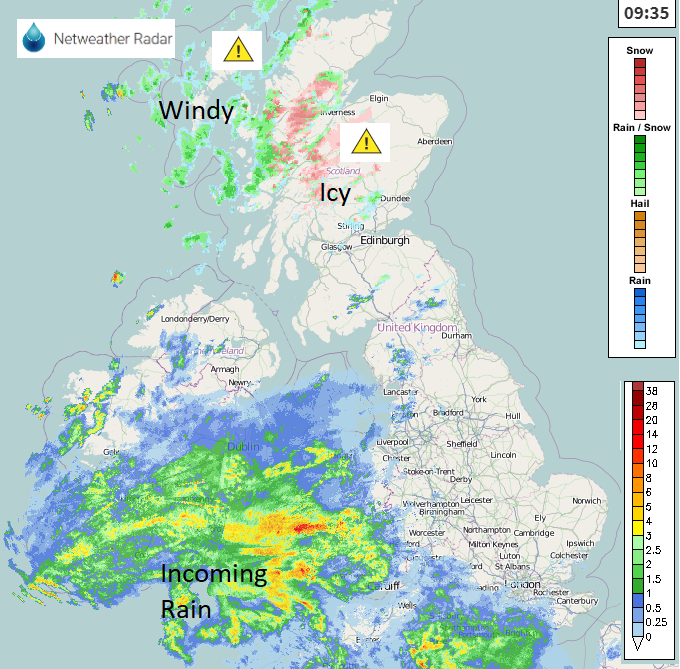 There is quite a difference in temperatures north-south. Scotland has seen a frost and sub-zero values. Southern England starts the day on a mild note around 7 to 9C. And there is some mild air caught up in today’s low pressure which is already bringing rain to SW England. This will edge northwards today with temperatures for the Midlands, more of Wales, Yorkshire and eastern England rising this evening into double figures. 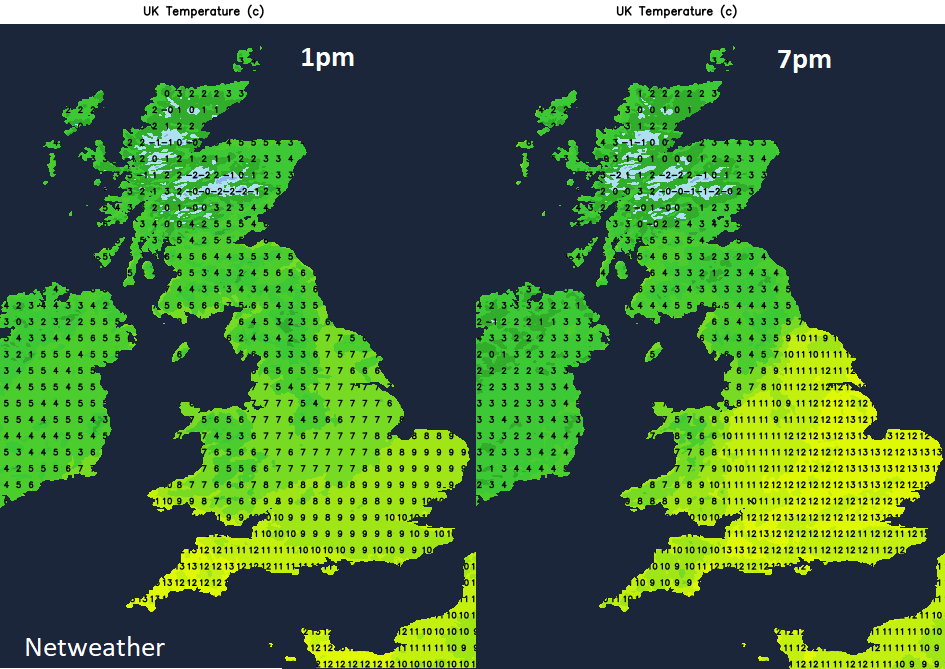 In the cold air in the north wintry showers continue to whirl in from the west with brighter skies and sunshine. There will be accumulations of snow today and tomorrow for the Scottish Highlands and we’ll have to watch the rain from the south today. As this hits the cold air over northern England and southern Scotland there could be some snow. Lying over the tops but also flurries for higher level routes. 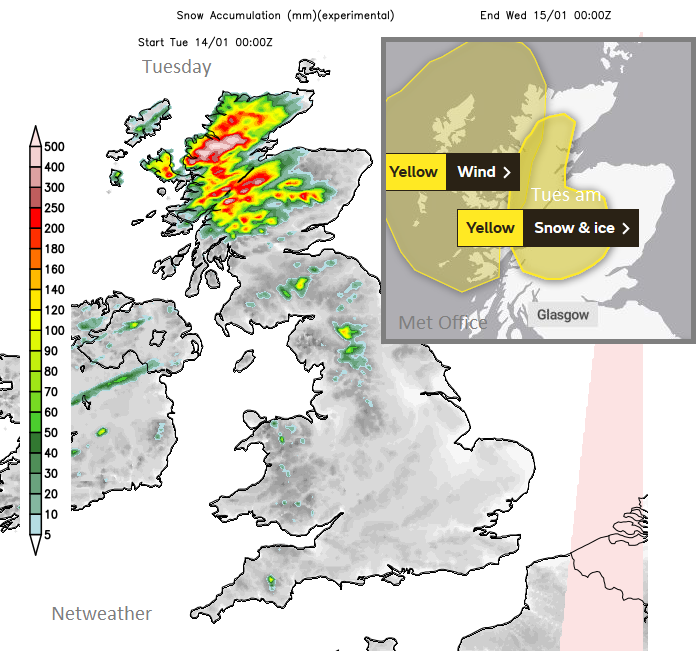 This next low will bring heavy rain to areas that already have saturated ground and high river levels. The storm surge from Brendan continues to bring coastal flooding concerns for Scotland and in the south-westerly winds today from the new low the English Channel will again see high sea levels around the high tides.

After a fair start for many before the rain in the far SW heads north. Over Wales this morning, around the Bristol Channel, to Cardiff and Southampton by lunchtime. Then into NW England and the Midlands before reaching much of England early afternoon with outbreaks of rain for parts of Northern Ireland. Scotland looks dry at lunchtime, still cold with snow showers for the NW Highlands and continuing strong SW winds for the Western Isles. 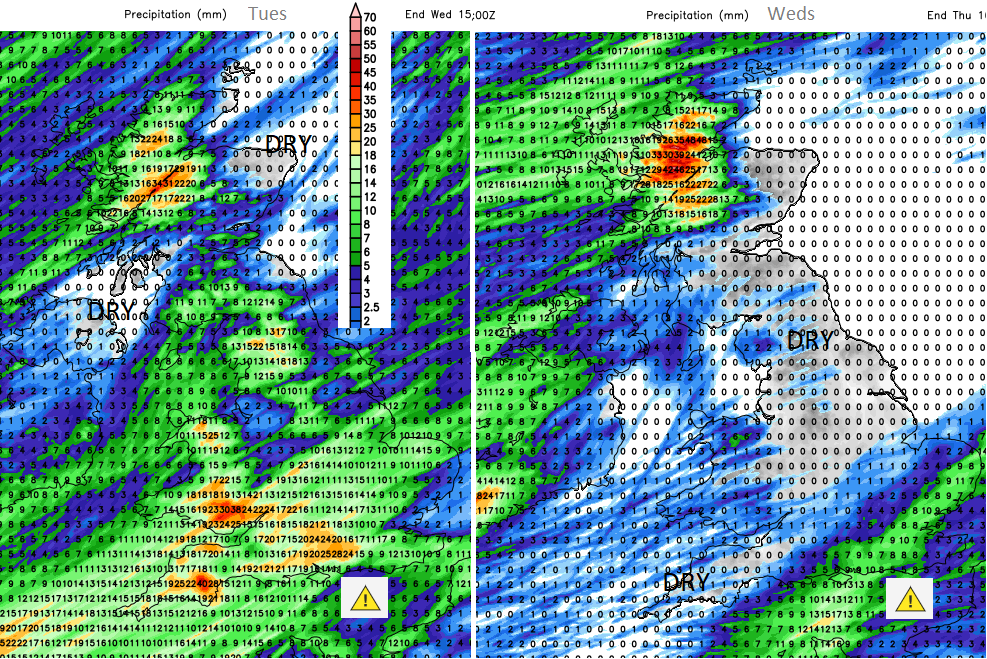 The south to SW winds freshen for southern Britain this afternoon as the wind warning starts for England and Wales. The winds will be strong even gales force at times around exposed coasts. The winds pick up for SE Britain, say mid Wales across to the Humber, to the south of that line.

Late afternoon the next active cold front will bring sharp downpours into SW Britain. This extends over the West Country, into the Midlands with vigorous convective elements bringing the risk of surface water flooding. Conditions for the evening rush will be poor again with the rain and gusty winds. 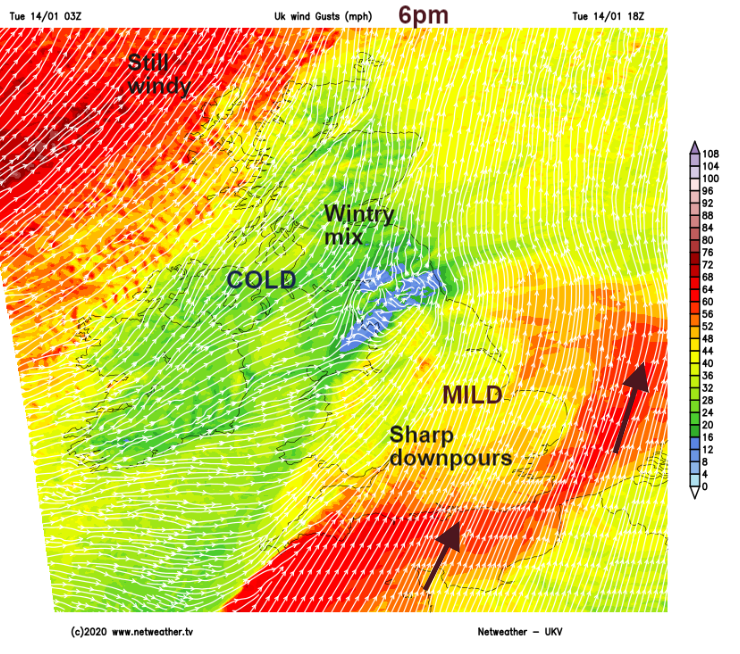 Gusts of 50 to 60mph with the windy weather continuing well into the evening for SE England, East Anglia and southern counties of England. The cold front from the low will move eastwards this evening, clearing the winds and heavy rain from Wales and the Midlands.

The frontal band lingers overnight for SE England and there is a Met Office rain warning for southern counties linked to the groundwater conditions and general saturated land which lasts into Wednesday morning. 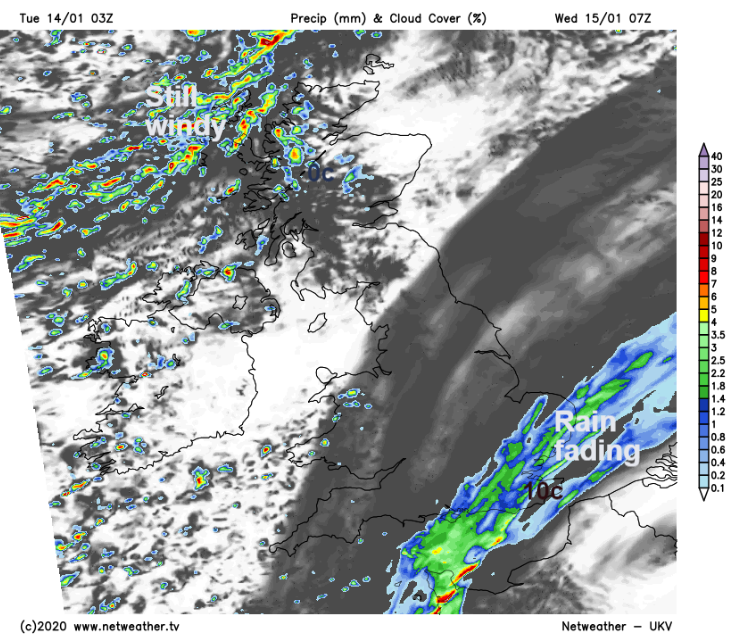 The rain takes its time on Wednesday morning to clear from SE England with a pocket of mild air still holding on. Elsewhere is cooler, still cold in the north but bright and sunny. Dry for many. There will be more snow showers over Highland Scotland with strong gusty winds reaching over Grampian in the afternoon. 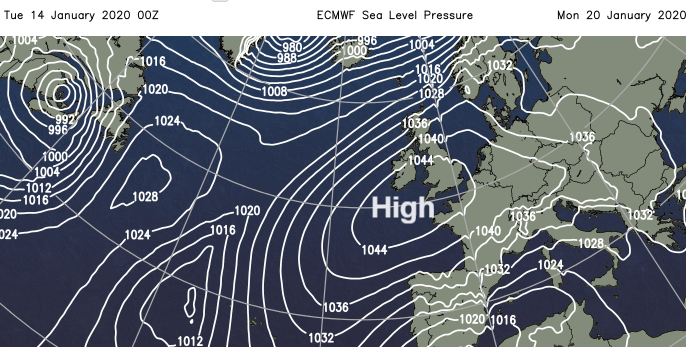 Another low pressure moves in for Thursday, but it looks like a change in our UK weather is afoot with more settled, chilly but dry weather should take hold for next week with frost and fog.