Looking back 30 years to what we now call 'The Great Storm', and the thing that sticks in most peoples minds isn't the loss of life and damage to trees and property, but a 'lady from Wales who asked if there is going to be a hurricane'. That single edited clip has been used in the Olympic opening ceremony and is probably right at the top of the list when ever people discuss weather forecasters getting it wrong.

I'll let Michael Fish explain it fully in the podcast he recorded with us to mark the 20th anniversary in 2007, but needless to say, it isn't quite as straight forward as history paints it to be. Oh, and if anyone ever tells you they know who the woman who called in was, they're wrong, there never was a call...

The Most Talked About TV Weather Forecast In History

Audio Only - Originally recorded in 2007. Thanks to Nicola Nibiru Guntrip for the photo.

While the storm was devastating, it wasn't a uniquely powerful system, the UK sees worse but they normally hit areas more used to bracing themselves for the onset of ferocious winds and rain - like the northern coasts of Scotland and Isles of Scilly. What made the '87 storm unique was the area it hit hardest and the wind direction, while a phenomenon that wasn't even in the forecasters hand book back then contributed to the localised extreme wind speeds, the sting jet. So as the storm developed in the Atlantic and headed towards the Channel, it was a typical autumn low pressure storm, winds, wet and disruptive, but nothing too far out of the ordinary for the time of year, while the forecasts on the day itself were hopeful that the storm would remain in the Channel and leave us very wet, while northern France bore the brunt of the damaging winds.

We all know now that it didn't quite work out that way, with the winds picking up energy from the sting jet and blowing from a south/south easterly direction left a trail of destruction overnight that will hopefully not be repeated, trees in the UK are used to coping with strong winds form the west, their roots and branches adapt to this as they grow, so wind from the south hit them at a weak point, which explains the unbelievable sights that the south/south east of the UK woke to the next morning.

A Playlist Of 1987 Storm Related Videos

Personally, I was awake for most of the night, as the roof parted company with our house, causing the loft hatch to blow into the loft and the wind literally rippled the plaster board ceiling. At one point I decided to head outside to check the damage, seeing roof tiles buried in the front garden to a depth of 20cm was eye opening, and being hit by a leave in the face was enough to send me back indoors pretty quickly. My morning was the same as countless others the next day, bright blue skies, no wind and utter devastation. The roof in the front garden, a neighbours oak tree had fallen and crushed a 20 metre wall, a garage reduced to a pile of bricks and very few trees more than house height still standing, luckily no one in the area was hurt overnight.

There was no electricity for 48 hours and the phone lines were out even longer, and the sound of chainsaws and bricks being thrown into skips were the soundtrack to the next week or two as life returned to normal, the first pictures appeared in the press and aerial shots of felled trees had the look of a massive explosion having hit the area. Looking back it's hard to describe just how much that night changed the landscape, the loss of so many ancient trees was, I think, the one overriding memory that sticks with me. 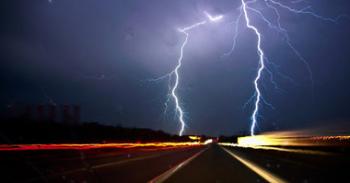