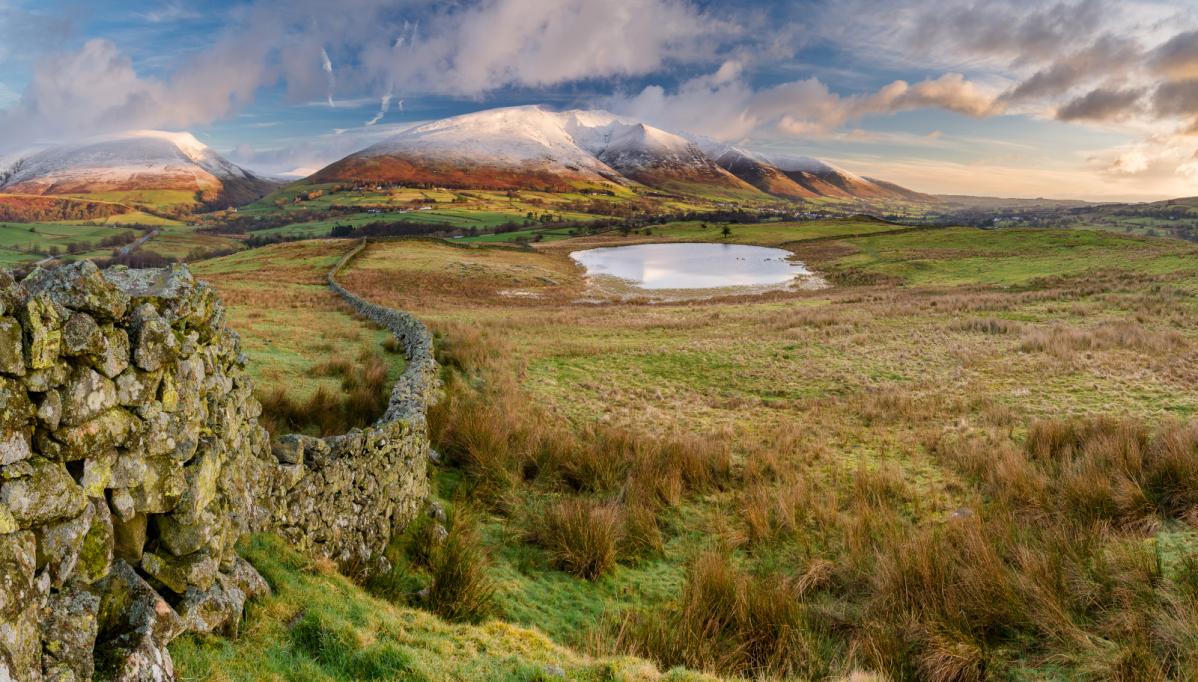 Looking for UK snow? Highland Scotland or tops of the Pennines is the only place to go

Rain will trouble the far SE of the UK with rain, hill snow and showers away to the far NW of the UK. In between, will be a lot of fair weather to start the week. During Wednesday things change with more mobile wet and windy conditions sweeping across the UK. It's not looking especially cold this week so no snow.
There were some cracking thunderstorms and heavy showers this weekend. Hail, lightning, dramatic night-time downpours as lines of showers moved across southern England.

This morning there is cold air in the north with Ice warnings from the UK Met Office for Scotland, the far north of England and Northern Ireland. It is much milder in the south with temperatures at 8 or 9C. With a waving front nearby the mild air stays over the extreme SE even though the weather remains unsettled. There are brisk SW winds for Northern Ireland this morning, gusty at times and the winds will freshen for southern Scotland, Cumbria and Pennine routes in the middle of the day. The incoming rain will turn to snow for Highland Scotland today, heading towards Inverness and the A82 this afternoon, could also affect the A9. For most of the UK, temperatures stay in low single figures with the risk of patchy frost by night as the winds fall light. 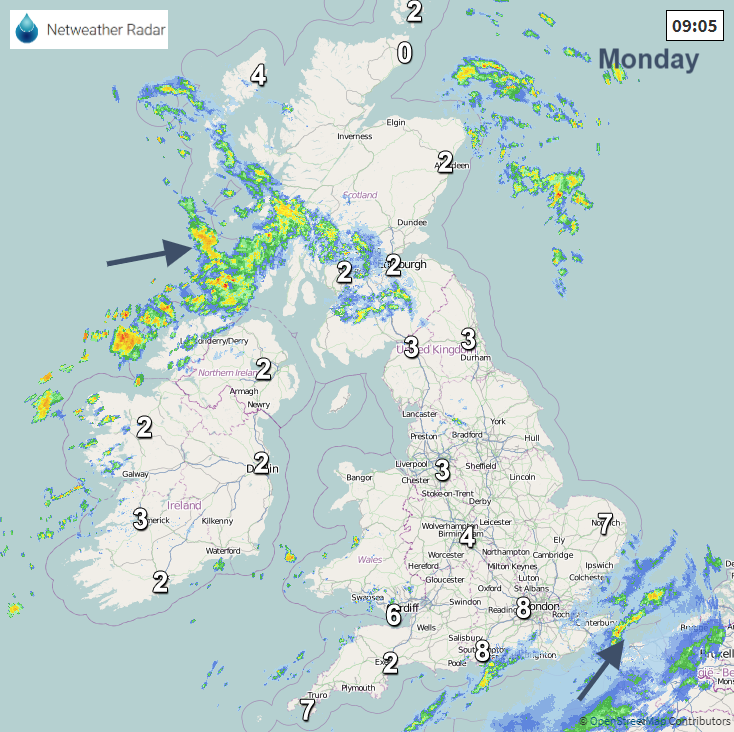 For Monday and Tuesday there will be rain for the north of Scotland, with showers for NW quadrant of UK. This is from a little low pressure sinking down from the north bringing unsettled weather to the Highlands and a flow of showers in from the NW. There will also be more rain clipping the far SE and East Anglia. In-between there will be a lot of dry weather to start the week. The rain lurking over Kent, Essex and Sussex links to a long frontal boundary which can be traced south to Storm Daniel. This low over SW Iberia is bringing wild conditions and thunderstorms (see tweet below) to Spain and Portugal, Madeira and Azores. Daniel comes from the naming group of IPMA, AEMET and Meteo France. The UK is in a group with Met Eireann (Ireland) and KNMI (Netherlands)

Tuesday will have light winds across the UK, the rain clearing from the SE and some good winter sunshine as the frontal high cloud clears eastwards. A cold start for many on Wednesday but then the week begins to turn much more unsettled. A large low pressure throws its weather fronts up through the UK midweek. During Wednesday SE to southerly winds will pick up for Ireland and SW Britain with rain arriving later on. 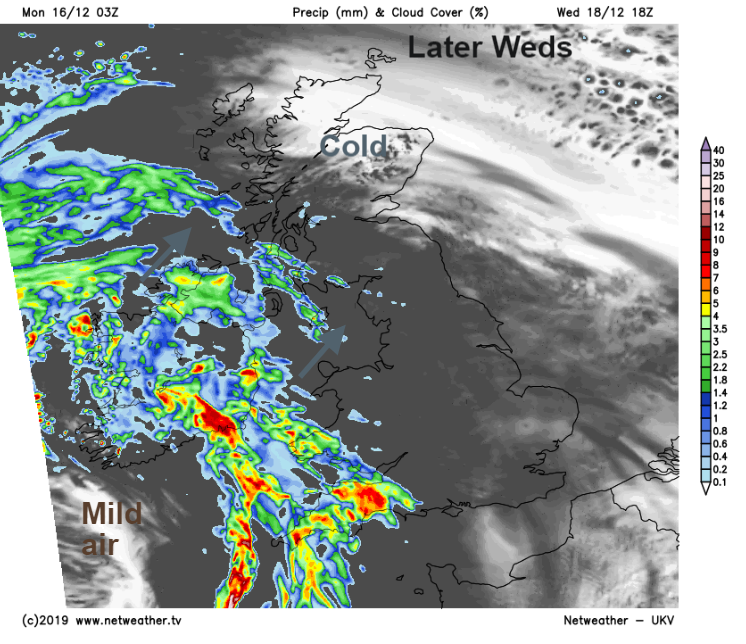 Wednesday night looks wet and windy with a miserable start for many on Thursday morning with the strongest winds through til lunchtime for northern Scotland where the heavy rain lingers.

Another low pressure appears on the charts for Friday but there is low confidence about the positioning so don’t take any weather app output for Friday too literally at this point. UKMO has the low centred over Wales at 12Z Friday and the GFS has it moving up the North Sea coast of the UK. 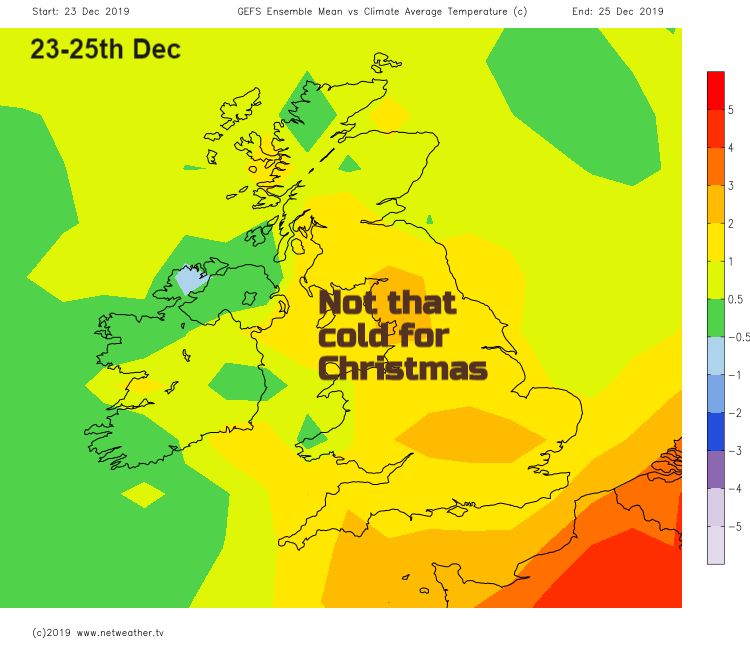 What about Christmas? There are signs of a low to the north or NE, with some colder air wrapped around it but the temperatures charts show milder air compared to average over the Christmas period. Maybe some wintry showers in the flow from the NW, looks a bit hit and miss at the moment but still nine shopping days to go. Give Santa a shake.