Week Ahead: Messy, humid weather with some heavy, thundery rain at times

A messy week of weather on the way this week. We'll see rain moving through at times, along with an increased risk of some heavy, thundery showers from midweek. There'll also be some warm, sunny weather to be had though, and it'll often feel humid. Temperatures will regularly rise into the low or mid-twenties.

Today, rain is edging in from the west across Ireland and into western Scotland initially. But it will eventually bring some showery outbreaks through into other parts of the northern half of Britain. For most though, it's a dry day today but with varying amounts of cloud with eastern Scotland and southern England best placed for the longest spells of sunshine. There is the chance of a shower or two developing in central and southern England this afternoon, but they'll be isolated should any breakout. 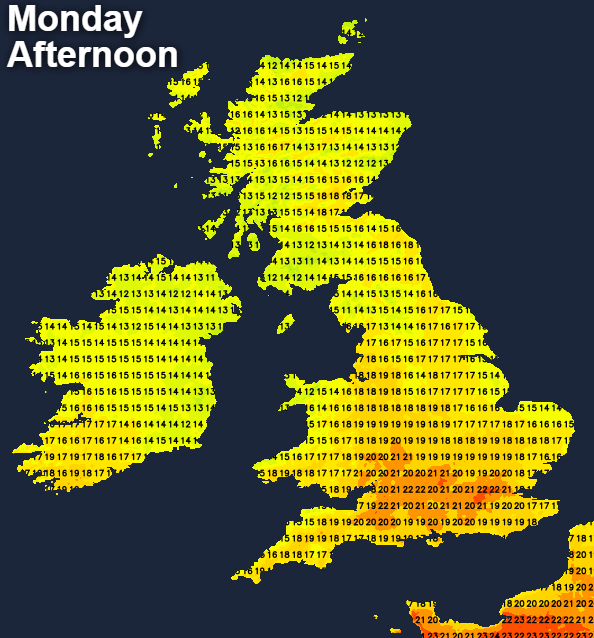 Under sunnier skies in the south, temperatures will rise to 21-23c, elsewhere 16-19c will be more like it.

The rain in the west will continue to trundle further east overnight, making for a wet start to the day for a good chunk of Scotland and the far north of England tomorrow. There'll be some showery rain in other parts of northern England too, but for the rest of the country, it'll be dry but mostly cloudy. 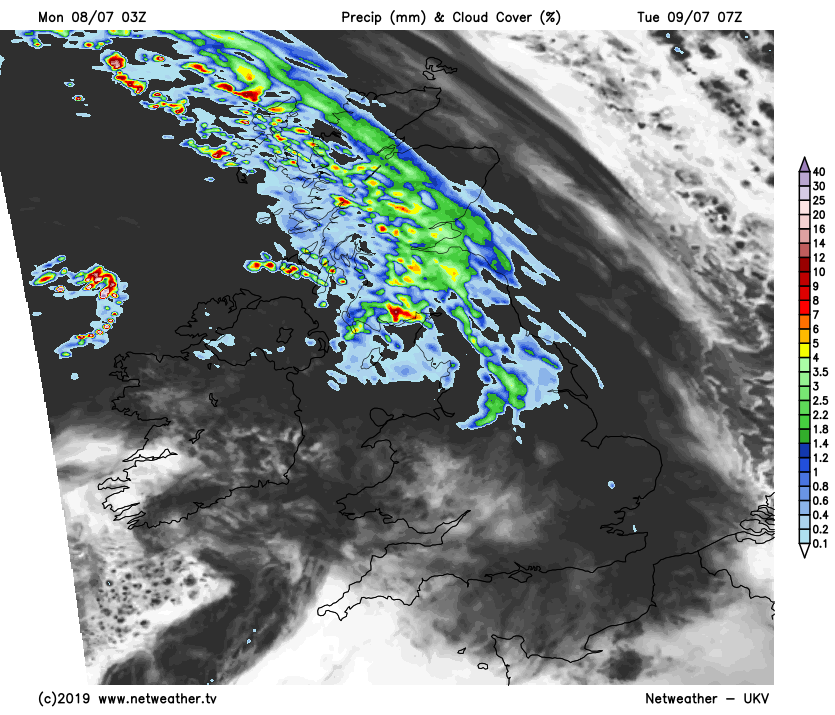 Through the day, the rain will carry on east, as well as edging some showers at least, further south. The best of the sunshine will be reserved for the south and particularly southwest of the country, where it'll also be warmest with highs into the low-twenties. Behind the main band of showery rain, skies will tend to brighten, but there'll also be the risk of some further showers. These could become heavy and thundery in parts of Northern Ireland, Western and Southern Scotland, and later Northern England.

Those heavy showers will then start to organise further, as fronts sit over the northern half of Britain overnight and into Wednesday. These will bring the threat of some high rainfall totals, with the potential for some localised flooding as the rain becomes persistent in places.

The rain will clear southeast during the day, becoming more patchy again as it does so, with much of southern England staying dry. Temperatures will creep up a notch from Tuesday's levels to 22-24c in central and southern England. Elsewhere, 17-21c.

Thursday and Friday will then bring quite similar days, with sun and showers. There'll be a humid feel, becoming very warm in the sunshine with temperatures up into the mid-twenties. The showers will be heavy, slow-moving and quite widespread though, with thunderstorms also likely.

It's a little way off yet, so subject to change. But into next weekend, it does look like high pressure should arrive to settle the weather down again. We may keep some showers to start with though, especially in the east.