Netweather
Latest - Week Ahead: Changeable with a smidgen of Wintriness

UK Weather: Cooler, But Still Sunny Today Before Turning Showery Into The Weekend

Wednesday was the joint warmest day of the year so far, with Kinlochewe in the western Highlands reaching 25.8C, which also occurred at Treknow in Cornwall at the other end of Britain on the 19th April (Good Friday). However, yesterday was the peak of this week’s warmth, as it will turn progressively cooler by the weekend, as an easterly wind picks up. It will also turn more unsettled from Friday, initially across England and Wales, then across many parts over the weekend, with a mixture of sunshine and showers, some of which will be heavy and thundery.

Thursday is looking like another mostly fine, dry and sunny day, though with a little more cloud than recent days. After a fresh start, with temperatures widely in single figures, any morning mist or fog should quickly burn off and many will continue with a sunny morning which will quickly warm up in the strong May sunshine, though cloudier across N. Ireland and western Scotland, with the odd light shower., and some high cloud across the west in general making sunshine hazy.

After a sunny morning, southern England and East Anglia may see more in the way of cloud spilling in from the east for the afternoon - as the easterly breeze picks up. Cloudy across western Scotland and N. Ireland too, with the risk of some sharp shower developing, but elsewhere, staying mostly dry and sunny through the afternoon. 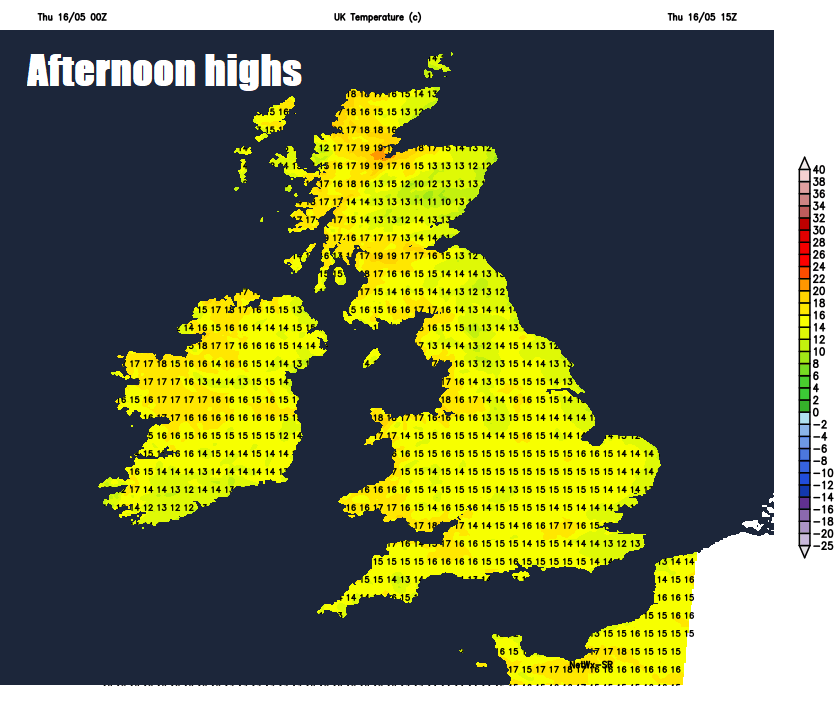 Temperatures cooler than recent days, particularly in the north where we’ve seen the highest temperatures. Highs of 16-19C generally inland, cooler around eastern coasts - where 13-15C is more likely. A freshening easterly breeze across the south. Remember that the sun is strong at this time of year, so UV levels will high where the sun's out for many, so be sure to protect yourself from the sun. Also, pollen levels will be moderate as we start to enter the grass pollen season.

Mostly dry tonight, some mist or fog  patches possible across eastern Scotland and northern England – where will be lighter, easterly breeze picking up further south will bring increasing cloud and perhaps the odd burst of showery rain to southern and eastern England by the end of the night.

Low pressure deepening over France and northern Spain on Friday will strengthen the easterly wind, which with high pressure retreating to the northeast, will bring more in the way of the cloud, a cooler feel and scattered showers pushing westwards across England and Wales. Chilly along eastern coasts in the strengthening wind off the North Sea. However, Scotland and N. Ireland will stay largely dry with sunny spells though, as a result, highest temperatures here – reaching 15-17C. Under the cloudier skies further south – 13-15C at best. 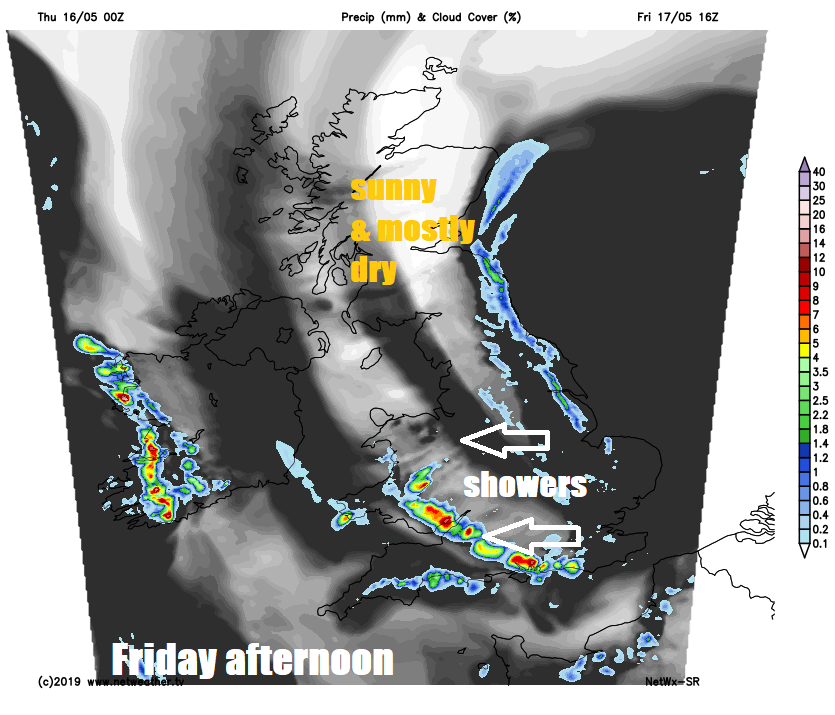 With low pressure towards the south, the cloudier, cooler and showery theme continuing into the weekend and extending across Scotland too. The bulk of the showers on Saturday pushing west across Scotland, where it will be cloudier, some sunny spells developing across England and Wales – where it will feel warmer, but this will trigger some scattered heavy and perhaps thundery showers in the afternoon, though some escaping them. Temperatures ranging from 11-14C in the north to 15-18C in the south.

Sunday seeing lighter winds and more in the way of sunshine, so feeling warmer as result, but scattered heavy showers will develop, which will be slow-moving and heavy with a risk of thunder. Most of the showers developing across central and northern areas. A little warmer, temperatures reaching 14-17C, perhaps 18-19C across the south and west, cooler around coasts.

Risk of showers, perhaps heavy and thundery locally, continuing early next week, but there will be some sunny spells and some places staying dry and with light winds, it will feel warm in any sunshine. Some uncertainty from mid-week, but it could be drier for a time on Wednesday, before more unsettled conditions with showers or longer spells of rain return. 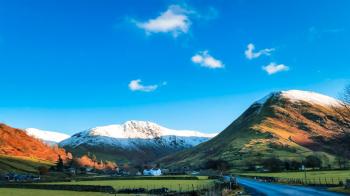 Week Ahead: Changeable with a smidgen of Wintriness