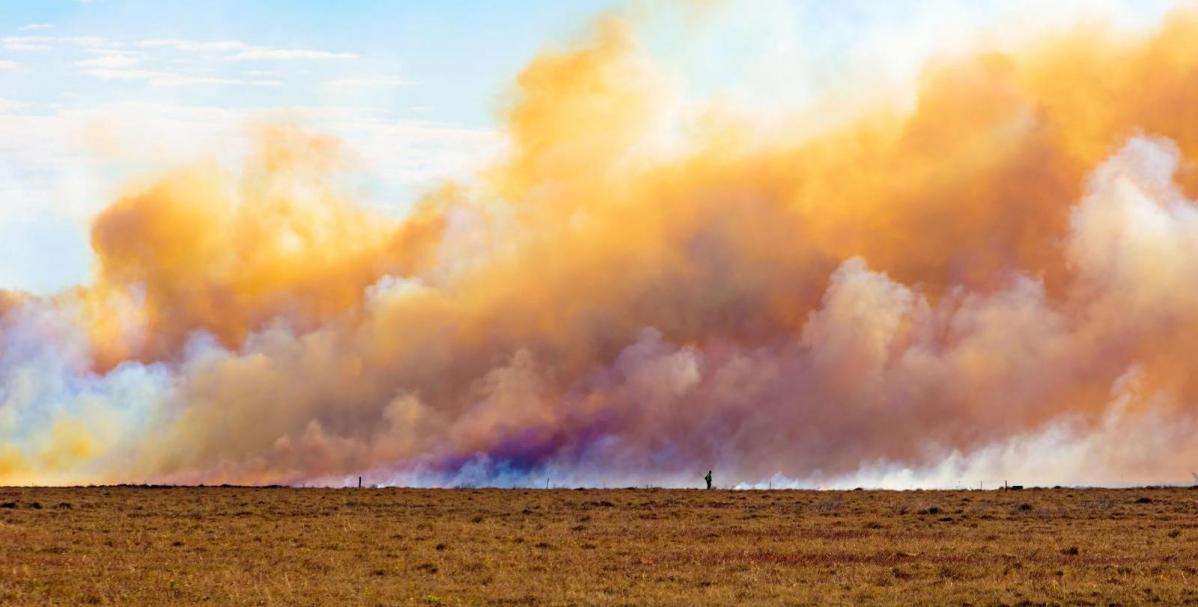 Wildfire risk here in the UK. A look at some recent fires and climate concerns across Europe

Recent lengthy spells of dry and warm weather have led to dramatic scenes of moorlands and mountainsides on fire.  In the UK, wildfires often occur in spring when there is lots of dry fuel from dead vegetation left over from winter. Also during the hot summer months, especially if there has been a warm, wet spell to allow vegetation to grow for a time, as new fuel. Grass, bracken, heather and moorlands are the usual UK locations rather than forests. In parts of Europe, it is forest fires causing more concern.

Even with incredible photos and footage, it often is remote news, as often the fires are away up on the moors or hillsides with little loss of property or life. For the fire service however,  it means days or weeks of intense, dangerous work.

Emergency planning procedures and reporting has existed for years due to the higher fire risk across Europe but now the UK finds itself with a greater risk of wildfire throughout more of the year, not just in the summer months. Droughts and heatwaves (more of which are forecast here with climate change) all heighten the risk and brisk winds spread and continue what may have only started as small isolated fires.

Fire has always been part of natures process. It is one of the oldest and most powerful land management tools but there are strict guidelines governing burning. Now alternatives such heather cutting are suggested rather than burning and it's potential to get out of control along with the air pollution caused.  The causes of wildfires vary but human behaviours are the main factor here in the UK, whether accidental or deliberate. If this coincides with school holidays the rates can increase dramatically but some fires start due to carelessness. With more dry, hot weather then conditions become ideal for fires to spread, getting out of control with more widespread fuel available.

"Climate change affects forest fires both directly through the weather conditions that affect fire ignition and propagation, and indirectly through its effects on vegetation and fuels. " 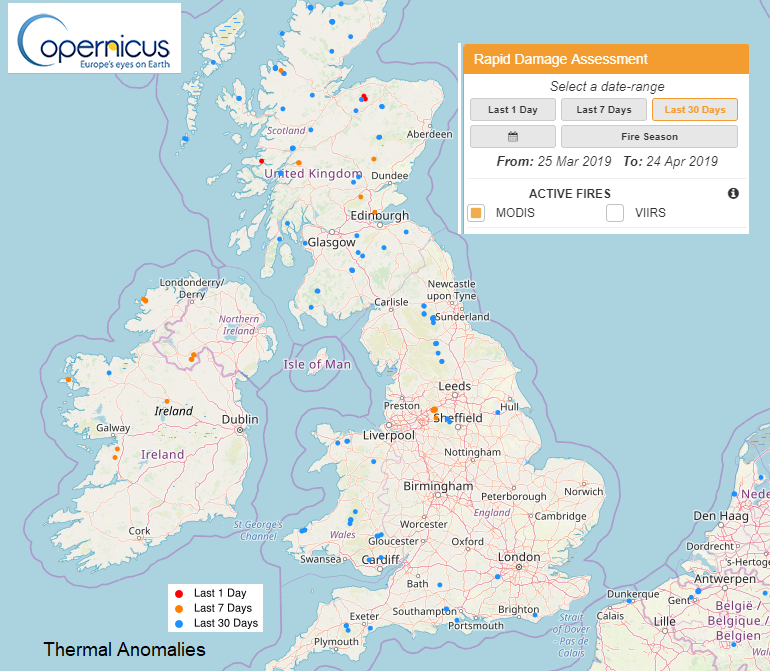 The thermal sensor, on board the satellites, identifies areas on the ground that are distinctly hotter than their surroundings and flags them as active fires.

The usual UK season for fire risk has been March to Sept but even by April 2019, mainly thanks to the February warmth, there have been numerous fires. The moors of NW England, Moray, Co.Fermanagh, forest fires at Beddgelert, in the mountains of north Wales are just some examples. Scandinavia has also seen plenty of early forest fires this year and whilst countries in southern Europe usually see the highest concentration of annual burning, northern areas such as Sweden have recently suffered from unprecedented numbers of forest fires.

The COPERNICUS current situation active fires UK map is from the European Forest Fire Information System (EFFIS), which was set up in 2000 and monitored fires across southern Europe. Up to 2010, there were records from around 23 counties with Portugal seeing a large proportion. Gradually many more countries were added to the list, including some in northern Africa and the UK was included in 2013. Portugal again was the country most severely affected by wildfires.

"The UK does not normally suffer from large fires. However, in 2013 there were 16 fires of over 40 ha recorded. Most of the damage occurred early in the season in March and April in Scotland " EFFIS 2013

Ignition by lightning is more of a risk elsewhere in the world but not unknown here.

The reports look back at fire numbers and weather conditions across Europe, "The aim of the European Forest Fire Information System (EFFIS) is to provide harmonised information on forest (wild) fires in the pan-European region." This includes fire preparedness and investment in fire fighting. By 2018 "wildfires have heavily affected Sweden, UK, Ireland, Finland, and Latvia; countries in which wildfires have not been a concern in past years. This shows the importance and the urgency to seriously invest in the prevention of forest fires."

In 2017 there were 19 fires which burnt over 30ha in area and by 2018 the areas >30ha burned were estimated at 79 (by satellite data), the report is not finalised yet. The UK was the fourth most affected European country in 2018. It was quite a year with the long hot, dry summer and the dramatic Saddleworth moor fires near Manchester. Already in 2019, there have been several significant fires, including the huge Moray wildfire in April. " Shaping up to be one of the largest wildfires the UK has ever seen " @Fire_Scot

There is danger to life and property but also the addition to existing air quality issues. Air pollution can be bad enough to cause health concerns and alerts without another source of particulate in the air. Communities are affected, places where people live and work, livestock and wildlife, the environment and local economy and the overall stress of a volatile situation.

"The cause of the fire is unknown at present – however during drier periods, fires involving grass, bracken and heather can develop very quickly, particularly in raised winds, resulting in fires getting out of control" Beddgelert mountain fire - N.Wales Fire & Rescue service.

Campaigns continue as people venture out into the countryside, taking care of litter, cigarettes, disposable BBQs, campfires. Thinking about how you are going to dispose of a BBQ beforehand, or just using a stove. Also reporting of suspicious behaviour. There can be other causes such as lightning strikes or out of control farm burning. Nationally wildfire causes can be complex with a combination of land management, human activities, traditional practices, alongside the current weather and longer term climate. Sometimes it is just local crime with huge consequences; illegal burning or arson.

As part of the annual report from EFFIS Daniel Calleja Crespo Director-General for Environment European Commission stressed that extreme weather conditions by themselves were not the cause of wildfires. “In the vast majority of the cases, it is human intervention that ignites fires, which, under extreme weather conditions spread uncontrollably, causing enormous destruction and significant losses of human lives and assets.” Fire prevention is key, guidelines shared of how to act when wildfires occur, sharing of best practice and experiences. Local communities need training, as do planners and policy makers.

“The Commission intends to keep on working together with the national administrations to be better prepared for wildfire conditions that may worsen in the future by the effects of climate change. Wildfires can be a real concern to any of the EU countries, as shown by the ongoing 2018 wildfire season”

It looks like the news and images of burning countryside will continue and wildfires are likely to creep closer to inhabited areas, as we already see in other parts of the world. 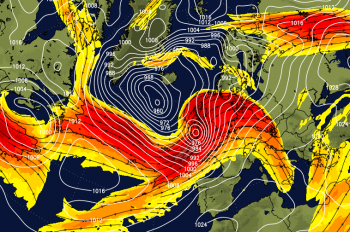